The worlds of watchmaking and automobile racing have shared a strong connection for decades, with racing and high-performance cars often serving as a direct inspiration for watches, including classic models like the Rolex Daytona and TAG Heuer Carrera, both of which recently celebrated their 50th birthdays. Below we take a look at 15 watches with designs influenced by motorsports. 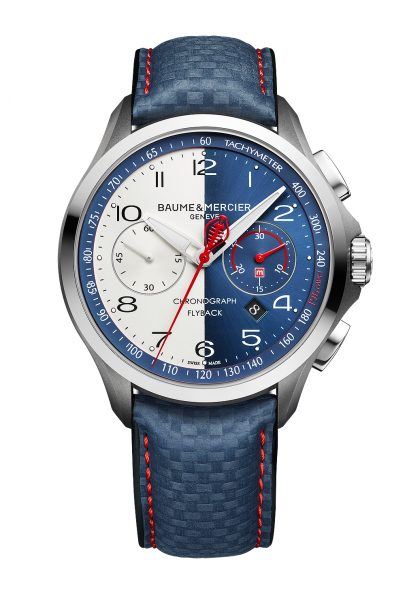 The showpiece of the 2017 Baume & Mercier’s Clifton Club collection is the Shelby Cobra CSX2299 Limited Edition — the latest timepiece borne of the brand’s partnership with the Carroll Shelby Company and the first to debut within the Clifton family. The watch draws its inspiration from the Shelby Cobra Daytona Coupe (CSX2299), one of the most iconic cars in the history of American motorsports. The Daytona Coupe was the first American car to win, in 1964, the 24 Hours of Le Mans, and brought America its first GT class World Sportscar Championship in 1965. More details about the watch in this article.

As part of its Breitling for Bentley series, Breitling introduced the Breitling for Bentley Supersports Chronograph, a limited-edition timepiece made as a tribute to the Continental Supersports, the fastest and most powerful Bentley car ever manufactured, and holder of the world ice speed record. The watch features a “dashboard-style” dial in Royal Ebony, with either blue, orange or white-ringed subdials and inner bezels. The bezel, designed in the style of Bentley dashboard controls, activates a variable tachymeter which measures average speed no matter how much time has elapsed, how much distance is covered, or how high a speed is reached. For more on the watch, and to see different dial colors, click here.

Inspired by the Gulf Oil-sponsored racing teams of the 1970s, and the iconic Porsche 917 driven by Steve McQueen in the racing film Le Mans, the BRM BT-12 46 Gulf has an in-house manufactured case carved from a single block of titanium and finished with a complement of six precision bolts. The design of the case, which measures 46 mm in diameter, is evocative of a Moto GP engine and contains a modified ETA Valjoux 7753 chronograph movement. The dial features the familiar orange-and-blue Gulf logo, whose colors are also echoed on the strap, made of actual seatbelt material from a racecar.

The Chopard Superfast Chrono comes in 45-mm-diameter case, and is powered by Chopard’s automatic Calibre 03.05-M. The silver-brushed vertical lines against the black background of the dial resemble the cooling fins on air-cooled racing engines, while the rubber strap has a smooth tread pattern, resembling the slick tires used for high-speed-track motor racing. The watch also features a tachymeter scale along the bezel. More on the Chopard Superfast watch collection here.

The Graham Silverstone RS Endurance 24HR boasts a monopusher movement with a double chronograph function for measuring 24-hour race and lap times. The main measurement of minutes and seconds is operated by the stop-start-reset chrono pusher at 2 o’clock with an inset red rubber catch, while an additional red pusher at 4 o’clock activates a secondary chronograph with a 24-hour counter and flyback function. Together, the dual timekeeping system is ideal for timing endurance racing and simultaneous test drives. Motorsport-inspired elements are also abundant on the dial, case and strap: the striped date disk recalls a race track’s red and white kerbing edges, the seconds counter is shaped like a car’s disk brake, and tire-tread-patterned black rubber with red insets is used for the strap.

Hublot launched its collaboration with Italian sportscar icon Ferrari in 2012. The partnership has already produced some memorable timepieces, including the Hublot Big Bang Ferrari Titanium Carbon (BB FTC), which features Hublot’s now-famous red sapphire crystal and is powered by Hublot’s in-house HUB 1241 Unico movement. The BB FTC is a flyback chronograph, and features a Ferrari-red central chronograph hand, and a subdial at 3 o’clock to record up to 60 elapsed minutes. The carbon fiber bezel is also manufactured in-house by Hublot; both titanium and carbon fiber are materials commonly used in high-performance automobiles. Click here to read more about the Hublot Big Bang Ferrari collection.

IWC‘s Ingenieuer line was revamped in 2013 (and again last year), and inspired by the brand’s partnership with the Mercedes AMG Petronas Formula One racing team. The IWC Ingenieur Double Chronograph Titanium has a titanium case and bezel, and also has a titanium crown, crown protector, and push-buttons, all of which are then coated with rubber for a better grip. The watch has a  chronograph mechanism (chosen for its usefulness in Formula One racing) with a split-seconds hand that can be used to record two intermediate times within a given minute while the blue- or white-tipped chronograph hand continues to run. When the push-button at 10 o’clock is pressed again, the split-seconds hand instantly catches up with the chronograph hand and runs synchronously with it again. As a result, the user can record as many lap times — important for determining pole position in an automobile race — as he chooses. The IWC Ingenieur Double Chronograph Titanium retails for $12,700. Click here for more details.

Jaeger-LeCoultre marked the 100th anniversary of British luxury automaker Aston-Martin, a partner for nearly a decade in the development of special, luxury-auto-inspired timepieces, with the release of several new watches. The Master Compressor Extreme W-Alarm Aston Martin, containing  Jaeger-LeCoultre’s automatic Caliber 912, combines a world-time display with a mechanical alarm function. The 46.3-mm-diameter case combines titanium and stainless steel and has a special logo, created by Aston Martin for its centennial, engraved on the caseback, while the black dial has a surface treatment evoking the grill on an Aston Martin car. The Master Compressor Extreme W-Alarm Aston Martin is limited to 100 pieces and has a price of $17,800. Click here for more on this and other Jaeger-LeCoultre Aston Martin watches.

The Parmigiani Bugatti Type 370 Mythe, released to celebrate 10 years of the Parmigiani/Bugatti partnership, takes its cues from the “engine block for thew wrist” aesthetic of that original Type 370 watch, including its unprecedented “transverse tubular” movement design, which assembles the plates and gears along a horizontal axis rather than a traditional vertical one. The case is designed in “driver’s watch” style, in which the time display is lateral in order to be seen easily by a driver with both hands on the wheel. The design of the tilted dial and the unusually shaped 18k rose gold case is based on an iconic Bugatti style element, the famous Type 57 grille, which was used on some of the earliest Bugatti automobiles. For more on the watch, click here.

Richard Mille also drew inspiration from materials used in Formula One cars for the RM 011 Flyback Chronograph, the first watch with a case made of brown silicon nitride. The silicone nitride in the watch is exceptionally hard (1,500 Vickers) and is highly resistant not only to wear and corrosion, but also to severe temperature variations. It is also very lightweight, which is why it is used in the automobile industry to make parts such as valves and turbocharger rotors. The watch is equipped with Richard Mille’s automatic caliber RMAC1, updated to include a flyback chronograph mechanism. More on the watch and its material here.

At Baselworld 2013, Rolex unveiled a 50th anniversary edition of the Rolex Cosmograph Daytona, which gets its name from the famous racetrack. This “prestigious edition” of the watch, priced at $75,000, is the first Daytona with a platinum case. Its tachymeter bezel is made of Rolex’s Cerachrom material. The wearer can use the tachymeter scale, in conjunction with the chronograph, to measure average speeds of up to 400 miles (or kilometers) per hour. Click here for our report on the watch from Baselworld 2013.

TAG Heuer celebrated the 50th anniversary of the iconic Carrera with the release of several new TAG Heuer Carrera watches. The design of the TAG Heuer Carrera Calibre 36 Chronograph Flyback is influenced by vintage TAG Heuer stopwatches, with the seconds displayed on a large scale along the outer rim of the dial. The watch also features a Zenith El Primero movement. More on the watch here.

The Tissot PRS 516 Extreme is based on a motorsport-inspired Tissot timepiece from the 1960s but adds some contemporary touches. The smooth lines of the case evoke the bodywork of modern automobiles and the details on the dial and bezel echo those on car dashboards. The strap has a racing-stripe design with a honeycomb pattern reminiscent of an automobile’s ventilation system; there is also a version available that has the original model’s famous bracelet, with cut-out circles illustrating the steering wheels of racecars. The automatic movement, visible through a clear caseback, powers a chronograph and date display.

Zenith entered a partnership with the Sportscar Vintage Racing Association (SVRA), becoming official timekeeper for its series of 16 races across the U.S.A. in 2016. In honor of this relationship, the brand launched a special edition of its Chronomaster 1969 luxury sports watch at the 2016 Baselworld watch fair. The Zenith El Primero Chronomaster 1969 SVRA Edition features an SVRA logo on its silver-toned dial and is equipped with the brand’s legendary, high-frequency El Primero chronograph caliber. The watch, which comes in a 42-mm stainless steel case and includes a tachymeter scale around the dial, comes on a black alligator leather strap with rubber lining and yellow stitching echoing the SVRA colors. Limited to just 100 pieces, it is priced at $9,000.

This article was originally published in 2013 and has been updated.

No Responses to “Need for Speed: 15 Watches Inspired by Auto Racing”