The 70s: Another Golden Era for the Heuer Carrera

Motorsport has always been in the DNA of the Heuer Carrera, which was named after an auto race. Heuer began an innovative partnership with Ferrari in the 1970s. The gold Carrera chronograph, which was given to each Ferrari driver in the Formula One race, became a symbol of the natural symbiosis at Heuer between timekeeping and auto racing.

Heuer began the new decade even before the old one had ended. Jack Heuer, the firm’s boss at that time and its honorary chairman today, knew that his chronographs would only have a future if they were also available as self-winding watches. To raise the enormous sums needed to develop the world’s first automatic chronograph, Heuer Leonidas SA formed a strategic alliance with several partners: Büren, the movement manufacturer, contributed the automatic movement with microrotor; Dubois-Dépraz developed a suitable chronograph module with counters for 30 elapsed minutes and 12 elapsed hours, and incorporating the rocking pinion that had been invented by Jack Heuer’s ancestor Edouard Heuer; and Jack Heuer was personally responsible for the new watch’s design. The time was ripe on March 3, 1969, when the partners unveiled the long-awaited first automatic chronograph – the famous Caliber 11 – at two press conferences held simultaneously at Hotel Intercontinental in Geneva and the Pan Am Building in New York.

A distinguishing feature of the new timepiece was its crown, which was positioned on the left-hand side of the watch’s case. No mere stylish gimmick, this unusual positioning resulted from a technical necessity. The Dubois-Dépraz chronograph module could only be affixed to the microrotor movement if the chronograph’s push-pieces were diametrically opposite the crown. It can be assumed that the buttons on an automatic chronograph are more important than its crown and that this watch would most likely be worn on the left wrist, so the decision was made to place the crown at the left and the buttons at the right. Caliber 11 paved the way for the success of the Heuer Carrera in the 1970s. 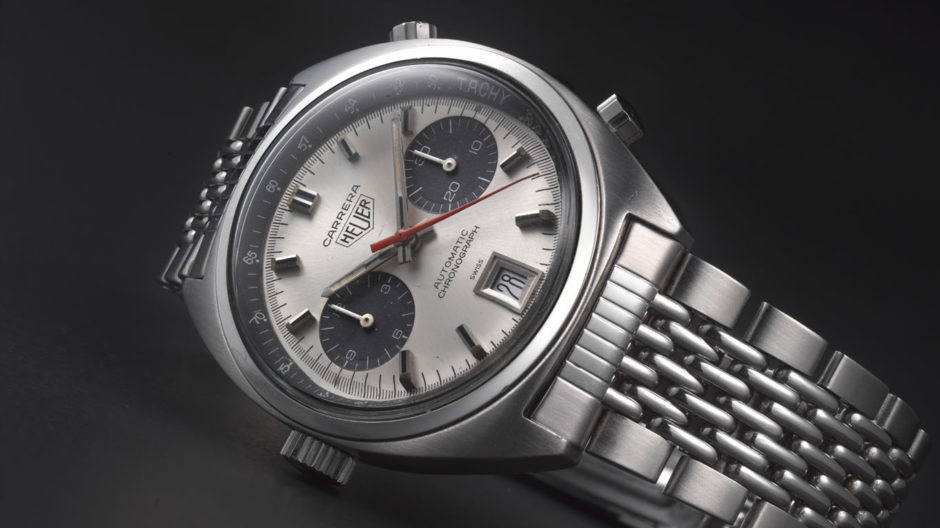 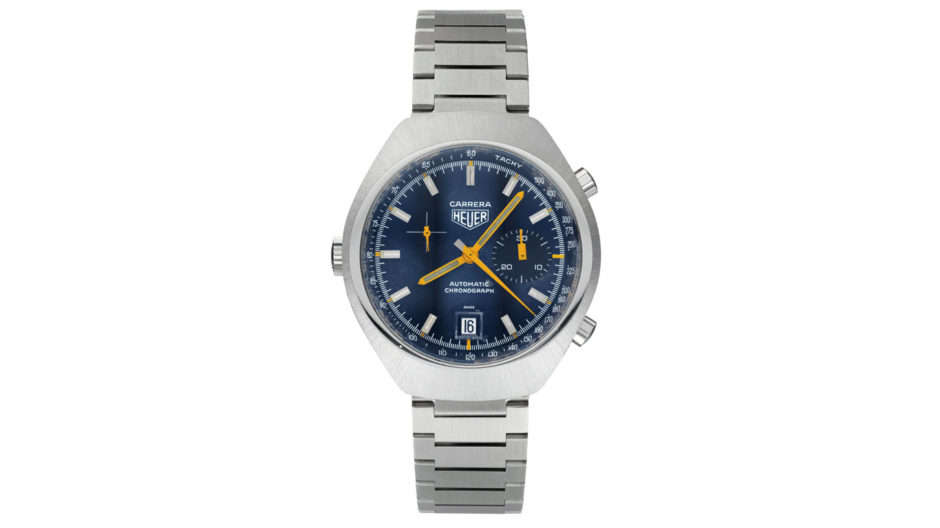 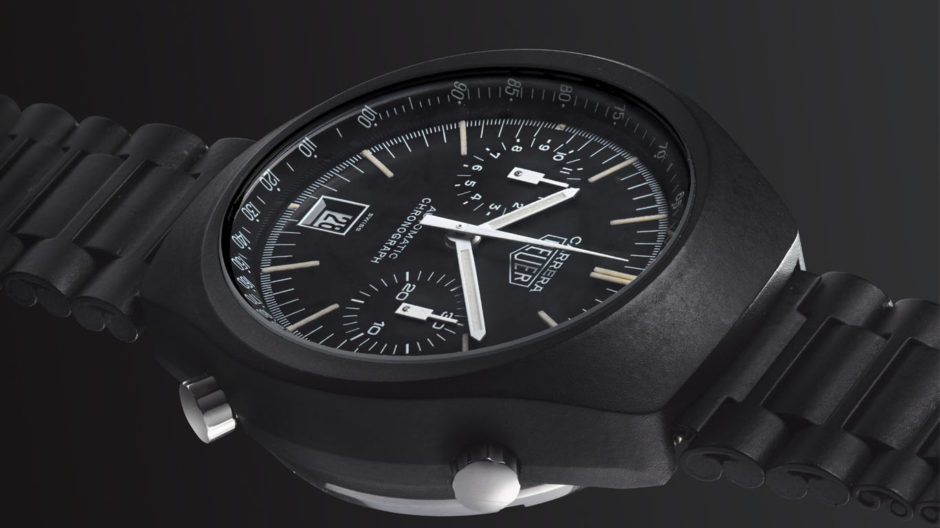 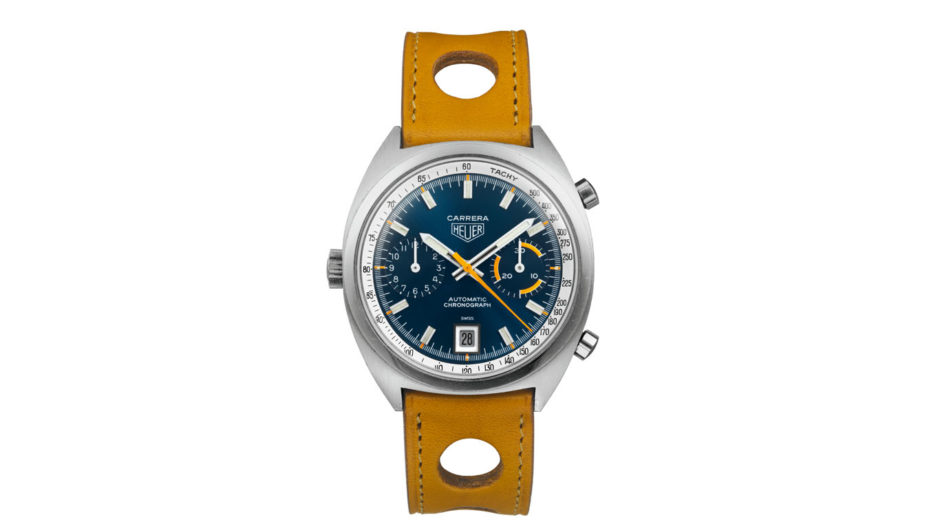 The early Carrera automatic chronographs are avidly coveted today. Collectors are especially eager to acquire the first version with the “Chronomatic” insignia on its dial. It was produced until September 1969. This neologism was replaced one year later by the more readily understandable phrase “Automatic Chronograph.” With their elegant styling, this second generation of Carreras still closely resembled the original model, but the third generation introduced a wider and sportier design: the strap lugs were now integrated into the case, which housed either Caliber 12 or 15.

Big watch brands owe their reputations to their pioneering spirit, which is necessarily distinguished by the courage to blaze new trails that no one had previously dared to tread.

Jack Heuer was the first watch producer to sponsor a Formula One racing driver: Swiss pilot Jo Siffert, who had shot to fame by winning the Formula One British Grand Prix in 1968, beating drivers such as Chris Amon, Jackie Ickx and Jackie Stewart. Jo was also the factory driver for Porsche and drove for the company in long-duration events such as the “24 Hours of Le Mans.” Jack Heuer and Siffert met in Siffert’s hometown of Fribourg and got off to a very good start. Siffert would wear the Heuer logo patch on his overalls and put a red Heuer sticker on the front or the side of the cars he raced. In return he would receive 25,000 Swiss Francs per year. Heuer recalls: “This relatively simple sponsoring contract with Siffert was probably one of the best marketing moves I ever made, because it opened the door for us to the whole world of Formula One.” In an ironic twist, the Swiss pilot and Porsche representative convinced Jack Heuer to replace his Alfa cabriolet with a Porsche.

Jack Heuer at the Grand Prix of Monaco in 1973 with the Belgian Formula One driver Jacky Ickx.

Heuer also became a pioneer of product placement in films. Thanks to the American prop master Don Nunley, whom Heuer had recently hired, Jack Heuer succeeded in having his brand’s watches chosen to play supporting roles in Steve McQueen’s racing film “Le Mans” in 1970. Moreover, Steve “King of Cool” McQueen was invited to choose his favorite Heuer wristwatch to wear on camera. The actor opted for the Monaco chronograph and wore the “Heuer Chronograph” insignia on the chest of his racing overall. By the way: the sporty outfit was given to McQueen by Jo Siffert, who advised the actor on the film set.

Steve McQueen during the filming of “Le Mans” with the Heuer logo on his overalls.

Jack Heuer also showed his pioneering spirit when he launched a partnership with Ferrari. In his autobiography, he describes his visit to the Ferrari factory in Maranello in the late 1970s. The racing stable of the “Commendatore” (the name refers to a historical Italian medal that had been awarded to Ferrari’s founder) needed a complex timekeeping system for its test track. Jack Heuer’s portfolio included exactly what the stable needed: the Heuer Centigraph. The costly technology was available only at a very expensive price, which the firm’s patriarch Ferrari was not prepared to pay, so the partners agreed to allow Heuer to use Ferrari racecars as advertising space. The red logo of the Swiss watchmaker soon adorned the hoods of the speedsters from Maranello. Every Ferrari racecar driver received a gold Carrera, Caliber 1158 CHN. Each of them had the driver’s name and blood type engraved on the back of its case.

Heuer’s dedication contributed to the resurgence of the Scuderia. Its brightest stars were Clay Regazzoni, who came from Ticino in Switzerland, and the extremely ambitious Austrian pilot Niki Lauda. The two returned the noble brand to the acme of the Formula One race in the middle of 1970s. A detail shows how much these legends loved their Carreras: they wore their Carrera motorsport chronographs during races, while sitting behind the steering wheels in their speedsters’ cockpits.

Jack Heuer (left) explains the construction of their golden automatic chronographs to Niki Lauda (2nd from left) and Clay Regazzoni.

In one respect, the Seventies are similar to our own day and age. Both eras are characterized by disruptions. On the one hand, the so-called “Nixon shock” wrought havoc in Switzerland’s export economy. In August 1971, U.S. President Richard Nixon unilaterally severed the U.S. dollar’s link to gold. Soon afterward, in 1973, the exchange rate between bullion and the dollar was allowed to float. The value of the Swiss franc appreciated enormously in relation to the dollar, and this made Swiss products much more costly abroad. To remain competitive, Heuer was obliged to sell his watches at their cost of manufacture. To make matters worse, these currency-related woes coincided with an era in which the manufacturers of mechanical watches were hard pressed to cope with the twin threats posed by quartz and microelectronics. Fortunately, Heuer was favorably positioned to master the challenges of the technical revolution. Once again, Jack Heuer had the right instincts and put his company at the cutting edge of progress: the world’s first quartz stopwatch in pocket format, the Microsplit 800, debuted in 1972; the first computerized timekeeping system for auto races was unveiled in 1974; and another world premiere followed in 1975 with the Chronosplit, the world’s first wristwatch chronograph with quartz movement and double digital display (LED and LCD). This timepiece was also popular among racecar drivers. The Carrera too came to the market in a version with a quartz movement, initially as a “simple” three-handed watch. But even the best European ingenuity couldn’t combat the flood of cheap watches from Asia. The difficult situation was further exacerbated by the seemingly unstoppable appreciation of the Swiss franc. The Heuer Carrera, which had pulled into the fast line with plenty of horsepower and racing sport dynamism in the 1970s, now faced an uncertain future.

Today we know: its rebirth was only a matter of time.

No Responses to “The 70s: Another Golden Era for the Heuer Carrera”