Shortly before Baselworld 2018 opened its doors to the public in March, Hublot introduced its very first smartwatch, the Big Bang Referee 2018 World Cup Russia™ Connected Watch (Ref. 400.NX.1100.RX). The 49-mm titanium-cased tech device is based on Google’s Android Wear OS and will be worn by the 101 referees (36 referees and 63 assistants) appointed as World Cup Russia 2018 (which starts today) Match Officials.

More importantly, it is a limited edition (2,018 pieces) and is priced at CHF 4,900 (approx. $5,100), making it both the least expensive way to buy a new Hublot and at the same time the most expensive smartwatch currently available (if you don’t count the TAG Heuer Connected Full Diamond with 589 diamonds and a price tag of $197,000 that was introduced as a one-shot in January this year).

Ricardo Guadalupe, CEO of Hublot, said, “The Big Bang Referee 2018 FIFA World Cup Russia™ offers all the usual features of a smartwatch, of course, but that’s not where Hublot has applied its innovation and audacity. It brings together everything that inspires the passion of football lovers! The FIFA World Cup is the Holy Grail of emotions for football fans, so just imagine what an object such as a watch that captures each and every one of its moments, its turning points, its stakes could suddenly represent? The football aficionados from among the brand’s friends have been waiting for this watch for a long time!”

In short: in addition to showing an exceptionally strong collection of new mechanical wristwatches at Baselworld 2018 (like the Big Bang Unico Red Magic), Hublot also offered a connected watch, made for 101 referees and 2,018 football fans, that came about because of “a specific need expressed by FIFA.”

Upon closer inspection, however, the Big Bang Connected is a lot more:

Which means that the Hublot Big Bang Referee 2018 World Cup Russia™ Connected Watch is most likely going to be a lot more than “a marketing gag,” as Bank Vontobel AG’s Rene Weber told Bloomberg in an interview in March. It’s first and foremost a pilot project for Hublot (and its parent company LVMH) to create and own a new market category. It’s a category that will allow full integration with a connected luxury experience that goes way beyond anything we know today: Hublot internally calls it the “Hublot 2.0 universe,” and by that the company certainly doesn’t mean its new manufacture building, opened in 2015 in Nyon. Bulgari, for example, has already shown in 2015 that a “connected” NFC-enabled watch can be utilized to work with doors, car engines etc. Now imagine what Hublot and a partner like Ferrari would be able to offer.

This is where the discontinued, five-figure Apple Watch 18k gold version had previously failed: offering simply a more exclusive material was never going to be enough, especially if buyers could get the same brand, design, and functionality for much less money. The company’s watchOS 5 was announced on June 4 and will be released as a free update in September (it’s currently in beta testing), and while we didn’t see any updates with Hermès this time around, we’ve seen how Tim Cook can successfully utilize partnerships with high-caliber luxury brands previously.

More about the Connected Big Bang: 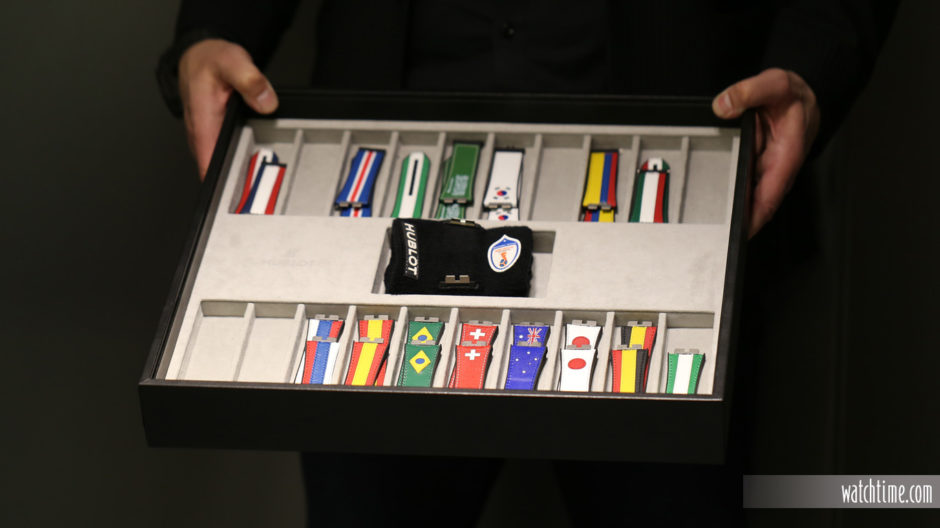 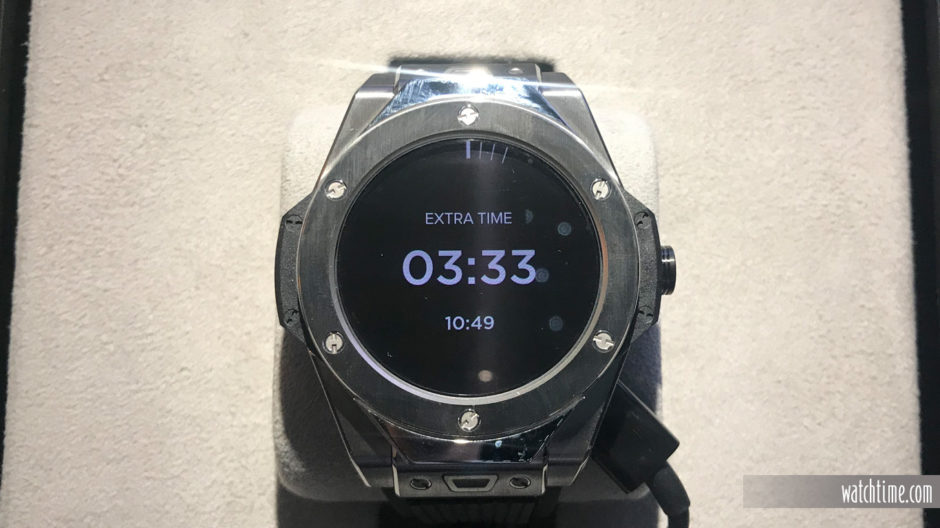 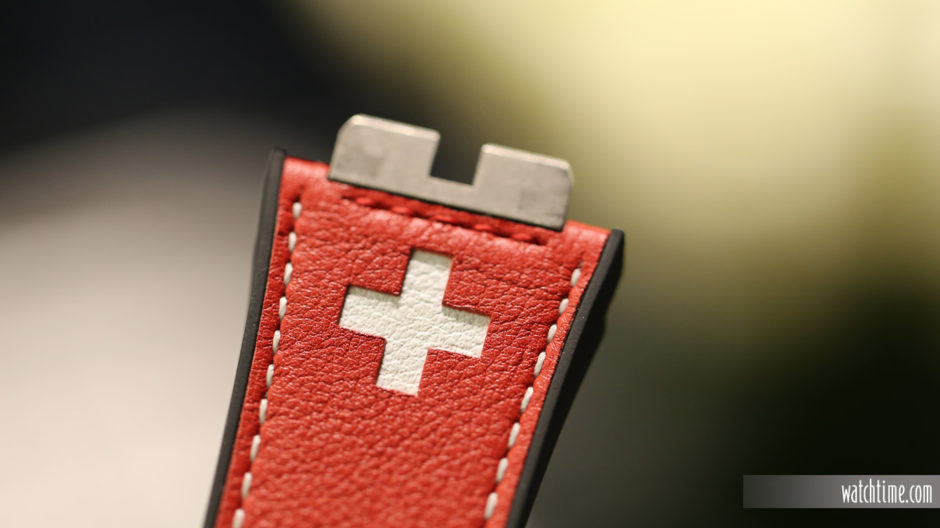 The Big Bang Referee 2018 World Cup Russia™ Connected Watch is compatible with all telephones using Android 4.4 and above, or iOS 9 and above, and can be comfortably charged with a charging pad. Hublot offers a choice of 32 dials inspired by the flags of the participating countries, and two neutral dials (available as an analog or digital design). Thanks to Hublot’s patented interchangeable “One Click” strap system, the watch can easily be matched with different straps (the watch comes with a cuff strap in sponge, a black-lined natural rubber strap, and several straps with flags will also be available to show support for a team). Live match information is displayed, and the watch will even vibrate when a goal is scored.

The 13.9-mm-thick titanium case offers a water-resistance of 50 meters, the AMOLED touchscreen measures 35.4 mm in diameter (400 x 400 pixels, 287 ppi). The watch is equipped with a 1.6-GHz Intel Atom Z34XX dual-core processor, 512 MB of RAM, accelerometer, gyroscope, NFC, tilt detector, microphone, GPS, and haptic motor and provides feedback through vibration. The Battery (410 mAh) is expected to last up to a one day on a single charge, with charging expected to take about two hours. The Big Bang Referee 2018 World Cup Russia™ Connected Watch should become available in the following weeks.