Green watches are proving more and more popular these days, so what better holiday to highlight a few of our favorite viridescent watches than St. Patrick’s Day? We’ve collected a few of the more notable models, but with so many brands embracing the hue, we restricted it to timepieces released in the past two years. Unfortunately, that means that the Rolex Hulk (a Submariner with a green dial and bezel originally released in 2010) and the Kermit (a Submariner with a black dial and green bezel originally released in 2003), two of the most popular green watches, won’t be making an appearance this time.

Last fall, Panerai released three green-dialed watches. Our favorite was the PAM 739. Slightly larger than the rest, at 47 mm in diameter, the Panerai Radiomir 1940 3 Days Acciaio is constructed from a single block of AS 316L stainless steel and features integrated lugs. The dial has the large Arabic numerals and linear hour markers characteristic of Panerai, along with a date window at 3 o’clock and a small seconds subdial at 9 o’clock. Powering the watch is the manufacture Caliber P.3000, with a three-day power reserve and large, brushed-finish bridges, including two bridges with twin supports for the massive 13.2-mm balance wheel. This manual-winding movement also features a quick-adjustment function for the hour hand. The price: $9,200. You can read more about the other models here.

If you’re looking for a watch that combines the viridescent dial of the Rolex Hulk but aren’t interested in picking up a diver, then this new line of Hublot Classic Fusions released during the LVMH Geneva Days show that runs concurrently with SIHH deserves a look. There are ten new watches featuring this specific dial color that, depending on the light, can transition from a bright, grassy green to an almost-black color. The watches come in four different sizes, 33  mm, 38 mm, 42 mm, and 45 mm, and the choice of a case made from Hublot’s proprietary King Gold or a satin-finished and polished titanium. Add in two chronograph options and you’ve got a collection that the whole family can break out during St. Patrick’s Day. Prices range from CHF 5,300 (approximately $5,560 USD at the time of publishing) for the 33 mm titanium model, to 29,300 CHF (approximately $30,750 USD at the time of publishing) for the King Gold Chronograph.

Back at the end of February, the good folks at MB&F released a new take on the GPHG award-winning and fan-favorite Legacy Machine Perpetual Calendar. The big news here? The watch appeared for the first time in titanium. While a pessimist might point out the blueish hints to the green that courses throughout the skeletonized dial, there’s easily enough to keep any drunken revelers from surprising you with a hard pinch. It’s limited to 50 total pieces and priced at $148,000.

Announced last month as a pre-Baselworld teaser, the Rado True Thinline Leaf embraces both the design panaché the brand is known for as well as the high-tech ceramic usage they popularized. While the green ceramic bracelet and case are attractive enough, it’s the dial that really steals the show. Inspired by nature, the green mother-of-pearl dial has a leaf pattern printed on its underside causing a dizzying effect when the light bounces on and off of it. It’s a unique piece that is worth seeing in person to fully appreciate the contrast between the detailed veins of a leaf and the classic mother-of-pearl sheen. It’s priced at $2,000 and will be available post-Baselworld. Check out Rado’s other pre-Baselworld 2018 novelty here.

This Sinn model boasts a moon phase that is completely unnecessary in the United States but is totally awesome in its own right. The German federal hunting laws — also known as Bundesjagdgesetz —prohibits hunting with the aid of artificial light sources. In order to hunt game at night, there must be adequate natural lighting from the moon. To figure what night offers the legal amount of light, the crafty German manufactory designed this moon phase to show when the moonlight is bright enough. It’s priced at $3,970. 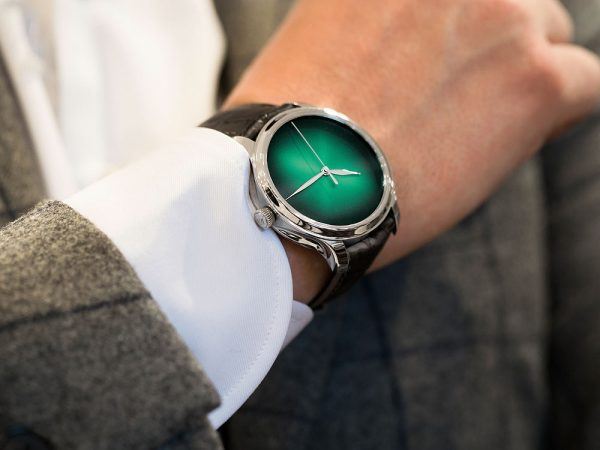 As it did two years ago, H. Moser & Cie. introduced a special-edition piece in its “Concept” collection at SIHH 2017. The Endeavour Centre Seconds Concept Cosmic Green was limited to 20 pieces each in white and rose gold when it was first released. The green fumé dial is unblemished by subdials, windows, numerals, indices, not even a brand logo. It’s the first fumé dial — the brand’s specialty — that features the color green. Learn more here. 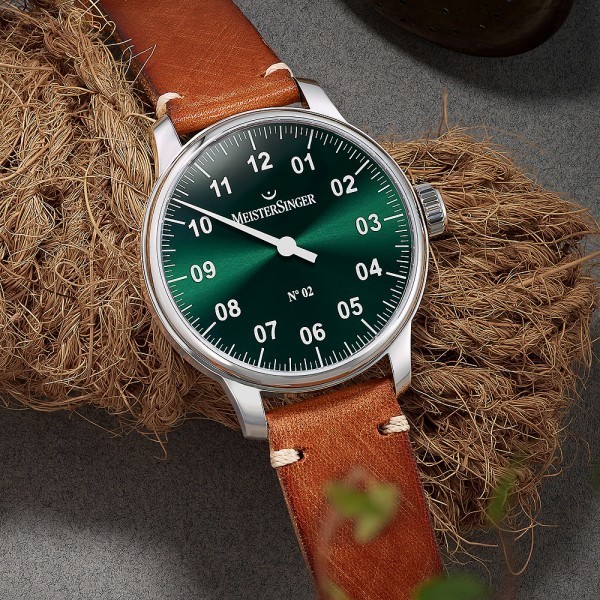 The German watch brand MeisterSinger introduced the green-dialed No.02 at Baselworld 2016. The watch is one of three pieces – the others are the Neo and the Pangaea – that featured this all-new color called “Rensing Green.” The color, which first appeared on the brand’s Salthora Meta jumping-hour in 2015, was created by Nico Rensing, a longtime member of MeisterSinger’s international sales team. More details about the No.02 and its green companions can be found in this article. 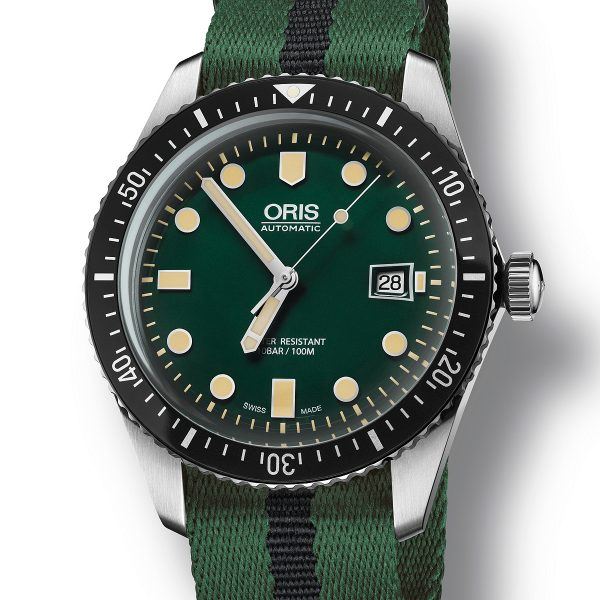 This dark-green-dial-version of the Divers Sixty-Five from Oris was added to the popular vintage-inspired dive watch collection in 2016. The hands and indices are filled with a type of colored Super-LumiNova called “Light Old Radium.” The watch is available with four different bracelet and strap options. More details can be found here.

The Frederique Constant Classic Worldtimer Manufacture, which debuted in a brown-and-rose-gold version last year, sports a new green-and-silver look in this pre-Baselworld 2018 incarnation. Like its predecessors, the watch has a three-part stainless steel case measuring 42 mm in diameter and a world-map dial swept over by hand-polished, luminous-treated hour and minute hands, and is powered by an in-house movement, Caliber FC-718. Composed of 139 parts, and visible through a sapphire caseback, it beats at a frequency of 28,800 vph, stores a power reserve of 42 hours, and features perlage and côtes de Genève finishing on its bridges and plates. The movement is notable for its world-time function, which is controlled entirely by the crown, with no additional push-buttons or correctors needed. The wearer can manually wind the watch by turning the crown upwards in its first position; set the date and city by turning it upward and downward, respectively, in its second position; and set the local time by turning it downward in its third, fully extracted position. The dial is surrounded by two disks, with a 24-hour day-night scale and a city indicator representing the 24 major world time zones. The dark green tint in the ocean areas of the world map, the date disk at 6 o’clock, and the world-time city disk is echoed by the dark green strap with white contrast stitching. You can learn more here.

No Responses to “10 Green Watches to go with Your Pint of Guinness on St. Patrick’s Day”