In my opinion, Christie’s ongoing series of online watch sales is one of the most consistently interesting parts of the watch auction world. Their watch specialists are able to curate a terrific balance of vintage and contemporary models at a diverse range of price points, meaning there’s practically something for everyone regardless of collector status. The current sale that runs through March 12, 2019, is, once again, chock full of intriguing models that range from the usual suspects to the extremely esoteric. We spent the morning at Christie’s HQ in Rockefeller Center combing over a select number of lots that stood out to us. The sale ends next Thursday, so if any of these lots interest you or if you want to check out the rest of the over 290 lots up for bidding, click here.

The Seamaster 300 is one of Omega’s most recognizable timepieces. The model up for auction currently (Lot #10) is Ref. 166.024 from 1969 and is a part of the second generation of Seamaster 300s originally released in 1964. It’s frequently known as the “Big Triangle” due to the size of the triangular hour marker at 12 o’clock. Compared to the 1948 progenitor, the Omega Seamaster 300 Ref. 166.024 had a larger diameter at 42 mm compared to 39 mm, a date window at 3 o’clock, and a large sword hour hand paired with a baton minute hand that was filled with luminescent material. The current estimate for this model is set between $5,000 and $8,000.

One of my favorite parts of visiting auction houses, whether live or online, is exploring the sheer variety of models on display. Often, you can find timepieces from fantastic makers that represent extreme value when compared to more well-known watches that are inflated by hype. This watch (Lot #90) struck me as a strong value proposition when I came across it in the auction catalog. It’s a Blancpain Triple Calendar in platinum from the early 2000s that is estimated to sell for between $5,000 and $8,000. The watch is highly legible, offers a functional complication, is in excellent condition, and is representative of the value of discreet luxury. Although it’s slightly smaller than I would usually look for in a daily wearer at 34 mm, I think this watch could make the right person extremely satisfied. 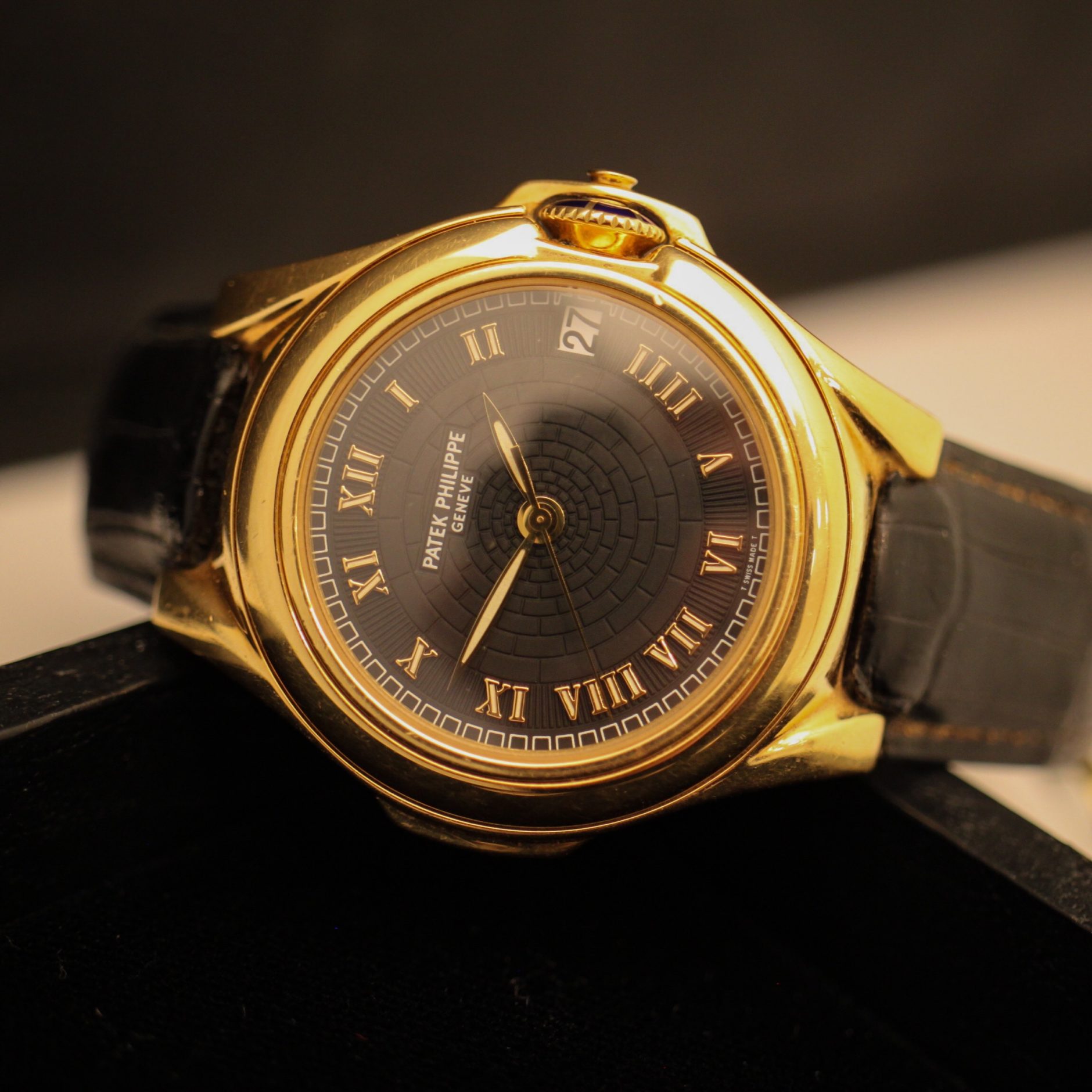 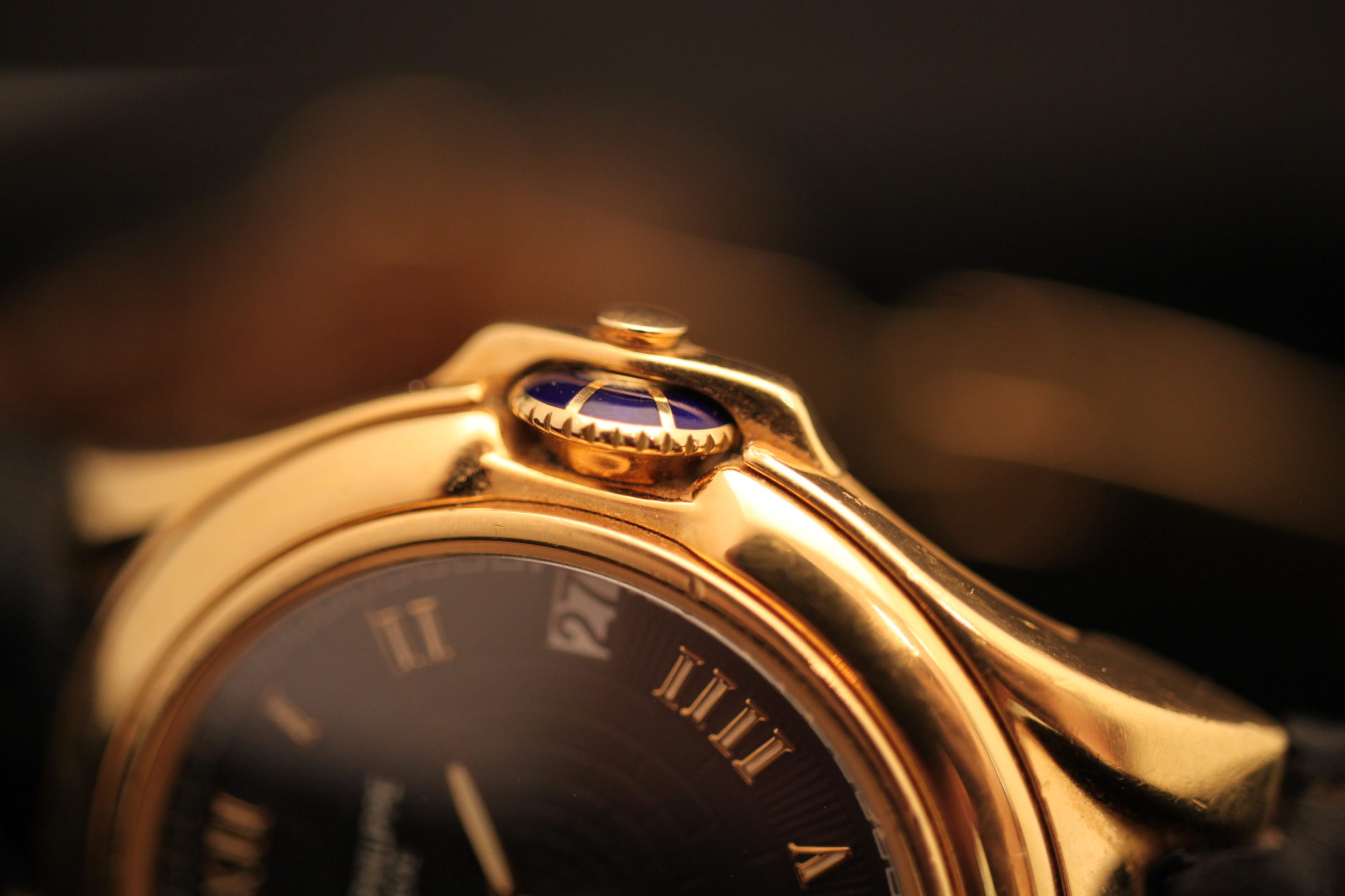 Before seeing this model (Lot #173) in the Christie’s auction catalog, I was completely unaware that the Patek Philippe Sculpture Collection existed. Originally made for the Russian market in the late 1990s, this highly limited range consisted of approximately 2,700 timepieces spread across four different models. Thanks to the concentric black guilloché dial design and bright yellow gold case, the watch has a surprising amount of maximalist flair to it, yet remains understated thanks to its slim proportions at 37 mm. Note: The crown has a bit of tsar-esque flair as well with a blue enamel construction and a single gold bar placed over it. Patek Philippe Ref. 5090 in the Sculpture Collection is said to be one of 200 total models in this design. It comes with the original papers and is estimated to sell for between $15,000 and $25,000.

Rolex Explorer IIs are somewhat sleeper hits in the world of vintage Rolex sport watch collecting. While the rest of the enthusiast world focuses on Daytonas and Subs, more and more people are coming around to the Explorer II, which, if you didn’t know, was intended for spelunkers when it was released rather than more mainstream sports like diving. This Ref. 1655 (Lot #234) from 1980 is in fantastic condition and features the “Freccione” 24-hour hand that enthusiasts have come to appreciate. Estimate: $12,000 – $18,000

The next Rolex model we’d like to discuss (Lot #246) is a Daytona Ref. 6263 with a red Daytona signature that has earned it the nom de guerre of Cherry. It’s easy to call a watch an icon in the saturated era of watch marketing, but I don’t think the Ref. 6263 has earned anything less than that title. Launched in the 1970s as a sibling to the equally popular Ref. 6265, this Daytona is one of an estimated 24,000 produced in stainless steel during the 1970s and ’80s. Although it comes without box and papers, this Cherry Daytona is estimated to sell for between $30,000 and $50,000 and is already approaching the high side of that figure. 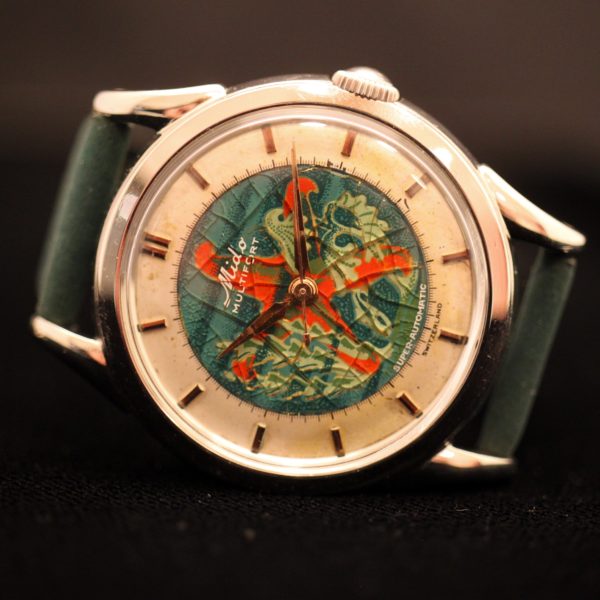 This eye-catching Mido Multifort (Lot #255) comes from the 1950s and features a colorful cloisonné dial with a starfish motif. The brand, which celebrated its 100th anniversary in 2018, released the first Multifort in 1934 and it quickly became one of the more recognizable collections for the brand thanks to the scalloped lugs, dauphine hands, and the variety of dials (like the Datometer) available. While I’m unfortunately unable to confirm much information about this specific model, Mido has a well-known history of producing colorful timepieces throughout its history like the Powerwind Rainbow Diver, which our friends at Worn & Wound have written about extensively here. Despite some small crackling in the cloisonné, this specific model is estimated to sell for between $3,500 and $5,500. 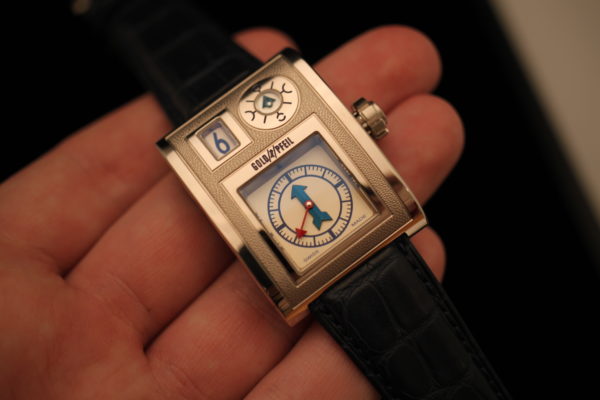 This is the second time I’ve stumbled across this peculiar timepiece (Lot #270) that the independent watchmaker Vianney Halter made for the German luxury leather goods company Goldpfeil in 2002. The first time I saw the watch was around two years ago at a New York preview for the Phillips Fall 2017 Hong Kong Auction where I was immediately struck by its unique case construction inspired by vintage camera equipment and the captivating dial layout that combines a jump hour in the upper right window with a minute/second display on a central axis in the larger lower window. (Goldpfeil translates to gold arrow, hence the dual arrow appearance) Finally, in the upper right display is a moon-phase indicator that utilizes four geometric depictions of the various stages of the moon. The case features a combination of four finishes such as hammered (meant to reference the textured leather of a vintage camera) for the dimples on the front of the case, polished, satin brushed, and matte. The estimate is set at between $15,000 and $25,000.