TAG Heuer first partnered up with Nintendo’s iconic mascot in 2021 with the launch of the TAG Heuer Mario Connected watch. Some were skeptical (myself not included, might I add) but it was a hit and sold out quickly. The natural next step was to do a mechanical watch and, wow, was Mario Kart— the mustachioed plumber’s legendary spin-off racing game— the perfect collaboration for a pair of Formula 1 watches. The first is a classic Formula 1 Chronograph with Mario Kart icons and emblems throughout while the second is a positively bonkers Chronograph Tourbillon that is going to have some of us reacting like the Nintendo 64 Kid (a reference that I think 100% of buyers of either of these watches will understand).

The TAG Heuer Formula 1 X Mario Kart Limited Edition Chronograph is done in a 44mm steel case. On the anthracite checkered pattern dial you’ll see the Mario Kart touches, most notably at 3 and 9 o’clock. You’ll see Mario at the 9 o’clock counter while the date window has a rotating cast of the recognizable MK items like the banana, star, and Bullett Bill. It’s so much fun cycling through the date window and seeing all those colorful icons executed so vibrantly and true to form.

You’ll also see the red lacquer “M” on the crown, insignia on the bezel, and the game’s logo etched on the enclosed case back. Speaking of the case back, the watch houses the automatic Calibre 16 movement which operates at 28,800 vph and has a 42-hour power reserve. This model has a water resistance of 200m so it can actually be worn and enjoyed. By far the more attainably priced of the two, I have a feeling we are going to see a lot of now-grown gamers eagerly snatch these up.

And then there’s the Mario Kart tourbillon. Yes, the TAG Heuer Formula 1 X Mario Kart Chronograph Tourbillon is real and it is absolutely delightful. Done in a 45mm titanium case, this uses the COSC-certified Calibre Heuer 02T movement we previously saw used in the tourbillon Carrera but within a Formula 1 case. Against the red and black contrasting dial, the eye very obviously and immediately goes to the tourbillon at 6 o’clock. With Mario, the Spiny Shell, and Bullet Bill moving along with the tourbillon, this is TAG Heuer embracing playful quirkiness in a way that just makes me smile. 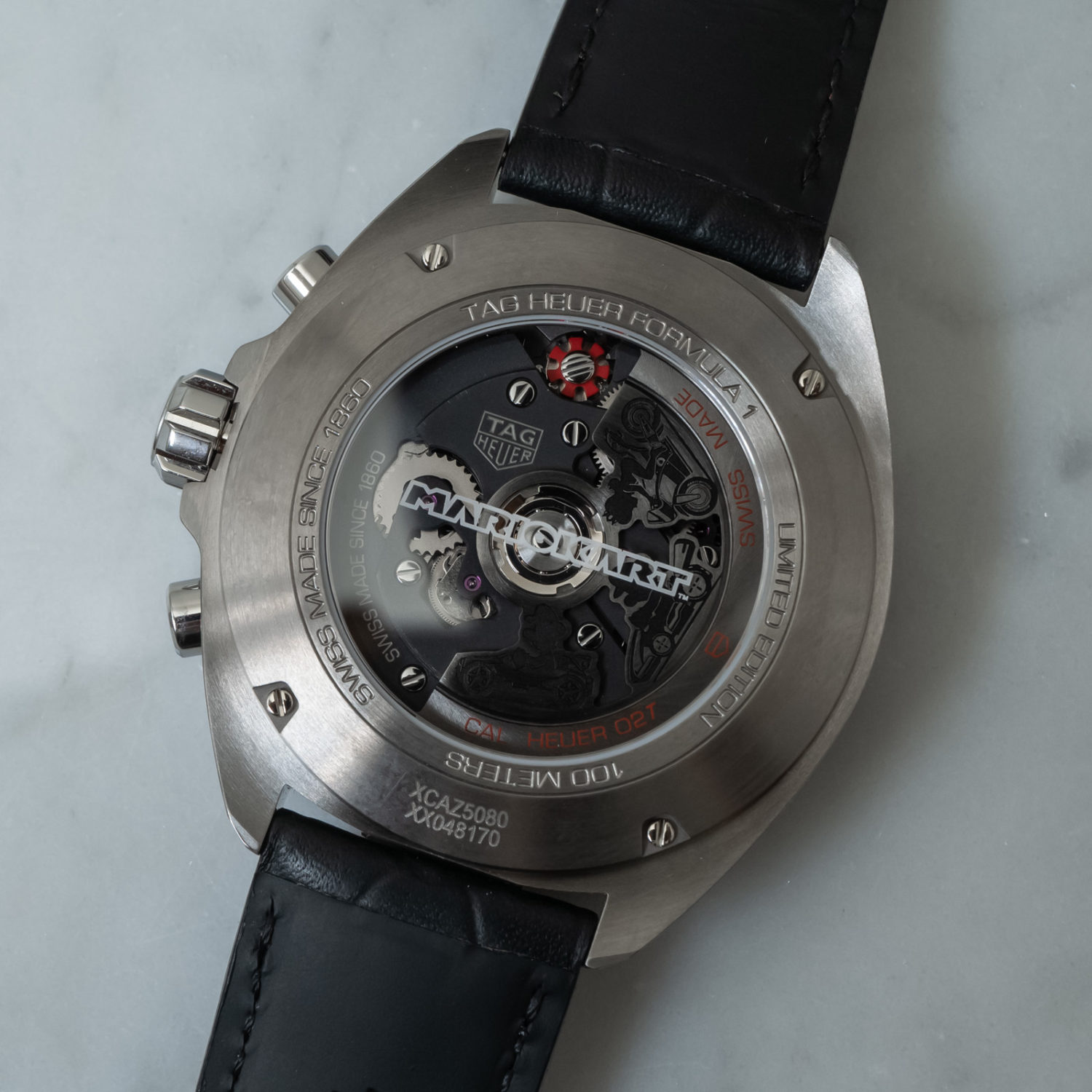 Like the chronograph, there is the red lacquer “M” on the crown and lumed game insignia on the bezel. Rather than an enclosed case back, however, there is an exhibition window with embossed Mario Kart logo. This watch is water resistant to 100m which is really not bad considering it’s a tourbillon with chronograph pushers.

Video games and haute horlogerie aren’t usually discussed in the same breath, but TAG Heuer went for it and makes a big statement in the process. For a new generation of collectors, video games like Mario Kart were likely as formative as some classic movies are to an older generation. It’s truly refreshing to see the industry shake things up like this and it makes me excited for what we could see in the future.