When attending gala events at glitzy venues like Cipriani at historic 55 Wall Street in New York City, it is not uncommon to see ice sculptures among the décor. However, the ones at last week’s “Shock the World 2009” event, hosted by Casio, would’ve given most anyone pause: inside them were watches, frozen in place like flies in amber.

Guests at the event soon realized the reason, as Shigenori Itoh, vice president of Casio’s Timepiece division (pictured below), demonstrated the brand’s flair for the dramatic. On stage for the media presentation, he pulled a lever to dump one of the carved ice blocks, along with the watch inside it — one of Casio’s G-Shock models — several feet to the floor, shattering it to pieces. Itoh picked up the watch, noting that, other than being extremely cold to the touch, it was not only unscathed but still functioning. Itoh revealed that the tough timepiece had been languishing in the ice for a full three days.

It was an appropriate opening act for the evening, which introduced a new crop of Casio G-Shock watches to a crowd of invited guests, who were also treated to cocktails, hors d’oeuvres and a special private concert by one of G-Shock’s most famous celebrity endorsers, Grammy-winning hip-hop star Kanye West.

The festivities also served as a reminder that those of us who spend much of our time following the world of luxury mechanical timepieces, and lauding the Swiss masterminds who work miracles with wheels and rotors, can often overlook the similarly impressive accomplishments of the Japanese Brainiacs who create their own types of horological wonders with circuits and microchips.

Casio, a Japanese company known for computing devices, entered the U.S. watch market in 1974. Its first release was a world first: an LCD watch equipped with a full auto calendar with leap year. Other firsts followed, throughout the digital-dominated 1970s and ‘80s and into the new millennium: the first watch with a databank and the first with weather-forecasting sensors (both 1984); the first with a GPS function and the first with a digital camera (1999); and the first with an MP3 player (2000).

Casio’s flagship watch, however, was conceived with a simpler goal in mind: it had to be indestructible — the ultimate accessory for an active lifestyle in the digital age. The guiding principle was what engineers referred to as the “Triple 10” concept: 10-year usage lifespan, 10-ATM (or 100-meter) water-resistance and 10-meter impact resistance. The original G-Shock (ref. DW500C) debuted in the U.S. in 1983 and has gained a large following ever since, one that the mechanical renaissance of the past two decades has not diminished. As new models with numerous functions — thermometers, altimeters, et cetera, all obviously powered by quartz movements — have been introduced throughout the years, Casio has continued to upgrade their technology, all with an eye toward increasing reliability and accuracy. First, it increased the watches’ battery life with solar technology (similar to that of the more well-known Citizen Eco-Drive) that uses renewable solar energy to power the watches’ functions. Then it became the first watch company to use the so-called Multi-Band 6 Atomic Timekeeping technology, a radio-controlled system that uses a tiny antenna to receive time calibration signals from six “atomic clock” transmission stations worldwide. These signals constantly adjust minuscule differences in the time once every 24 hours to achieve to-the-second precision. Most recently, the company introduced its 5 Motor Drive technology, which uses multiple tiny motors to independently control the chronograph hands in its analog models, which encompass some G-Shocks as well as models in Casio’s other brands like Oceanus and Edifice. A specially developed “Auto-hand” location technology checks and adjusts the watch’s hands once every hour.

Casio unveiled two new G-Shocks for 2009 at the event. One is the G-Rescue (Ref. G7900), inspired by search-and-rescue teams. The big hexagonal case has four huge screws and the biggest buttons ever on a G-Shock for easy operability even if the user is wearing gloves. This digital watch boasts the trademark G-Shock ruggedness and impact resistance (it’s able to withstand temperatures as low as -4 F and water pressure to 200 meters) and includes multiple adventure-oriented functions: a moon and tide graph, world timer, four alarms, a 1/100-second chronograph and a 12/24 hour format. The G-Rescue is available in black, white or red, and retails for a (very!) recession-friendly $99.

Below, Casio’s G-Rescue in red

There’s also a new ana-digi model, called the G-Aviation (Ref GW2500), Casio’s high-tech answer to the recent flurry of pilots’ watches. It includes several features that make it useful for aviators, including its “hybrid mount” case construction that withstands intense gravitational forces and vibrations that you’d encounter in a flight; an aircraft-console-like dial design with a 3-city simultaneous display; big, luminous hands and Arabic “12” for easy visibility; and an automatic LED light that you can activate by tilting the watch toward you. The G-Aviation comes on a resin band for $240 and a metal IP bracelet for $350.

The G-Aviation on resin strap

The G-Aviation on steel bracelet

Casio introduced other projects at the event, including new G-Shock models with metallic-color cases and straps; a new line of scaled down models called G-Shock Mini; and the design for the new Casio Concept Shop, a modern retail space at New York’s Tourneau Time Machine, the world’s largest watch store, with interactive, motion-sensor display cases. The company’s partnerships with Tourneau — and its significant presence at recent years’ Basel watch fairs — should leave no doubt that Casio intends to be a player in the low-to-mid-range quartz watch market for the foreseeable future.

No Responses to “Riding the Shock Wave”

END_OF_DOCUMENT_TOKEN_TO_BE_REPLACED 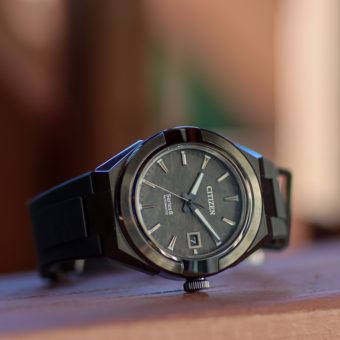