We’ve already seen a few new Royal Oak Offshore 25th Anniversary models and a couple new Millenary timepieces, however, this week at SIHH, Audemars Piguet unleashed a whole truckload of new watches — the most of any brand presenting. We’re going to run through the top eight most notable pieces before going deeper into what else the brand released during the coming weeks (Spoiler alert: there’s a lot of Royal Oaks).

Update: During the SIHH fair, Melanie Feist of our German sister publication watchtime.net interviewed Audemars Piguet CEO François-Henry Bennahmias about the new collection. Check it out at the end of this article.

First up, the Royal Oak RD #2, which is in the running for the most discussed watch of the entire week. Right off the bat, we could tell that this was the hero piece for AP. Coming in hot at 6.3 mm, it lays claim to the title of the world’s thinnest automatic perpetual calendar ever. Not only does it have the great looks and iconic aesthetic that is associated with the Royal Oak, it is also revolutionary for the brand in many respects. AP was able to subsidize the watch from a three-story movement to a single one by combining various functions into single mechanisms. The brand was then able to shrink the rotor down to a minuscule 2.89 mm. Everything else about the watch, from the tapisserie dial, to the moon phase at 12 o’clock (a throwback to the company’s first perpetual calendar wristwatch in 1955), is classic Royal Oak. 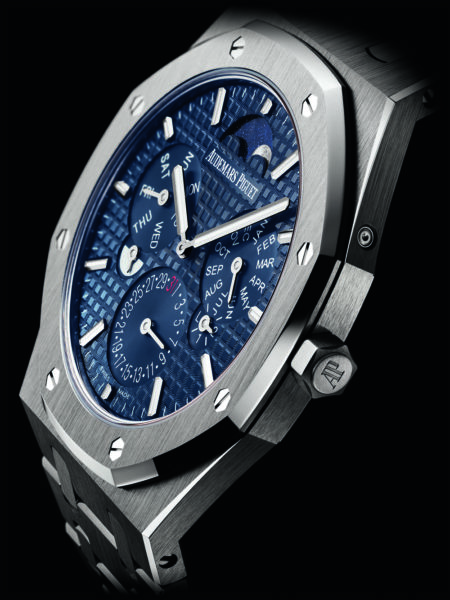 The Audemars Piguet Jumbo Extra-Thin in Titanium and Platinum

The thin streak continues with a new Jumbo Extra-Thin, this time in titanium and platinum. Coming in at 39 mm, this is the closest watch in AP’s lineup to Gérald Genta’s original 1972 Royal Oak. The selling point of this new model, however, is the titanium case with polished 950 platinum bezel and links. The bracelet is also titanium and features a titanium folding clasp. The rich blue tapisserie dial is stunning and the unique combination of materials has made this watch immediately jump to the top of a few of my colleague’s wish lists. 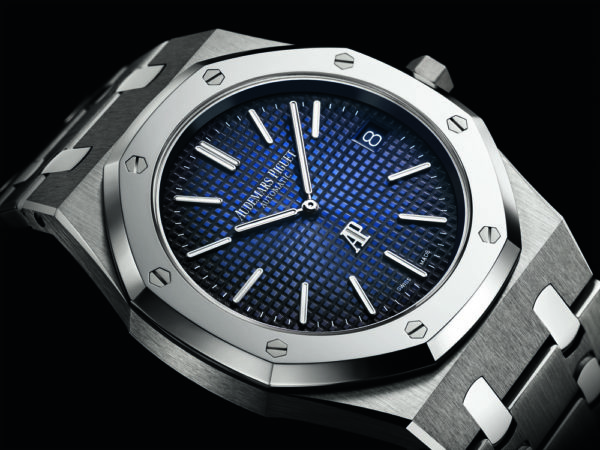 Now, these are super funky. While the three watches in this collection (stainless steel, 18K pink gold, and platinum with a blue sapphire bezel) continue the ultra-thin trend, they also introduce a tourbillon and new dial formation to this year’s models. The three dial colors (blue, purple, and smoked blue) really pop and are just generally fun to look at. It’s remarkable that these colors are able to fully grab your attention before even realizing there’s a tourbillon at 6 o’clock. It’s a nice change of pace from the colors we typically associate with the Royal Oak. Billed as “tapisserie evolutive,” the three watches are striking and might mark the beginning of a new design code for the Royal Oak and its extensive family. It will be interesting to see what follows up these watches at SIHH 2019. 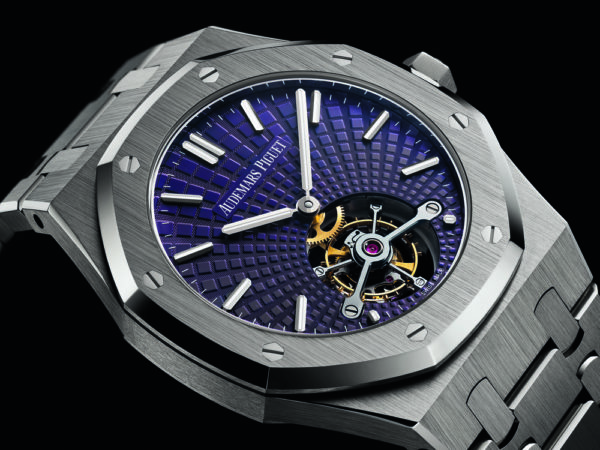 This watch is the evolution of a timepiece first released in 2016 in a 41 mm case. This time around, it’s been reduced to 37 mm and dressed up in a Frosted Gold finish. As one of a few Royal Oaks released this year focused on the ladies, this is a highly complex watch that is skeletonized and uses dual balance wheels and two hairsprings to improve precision and stability. All the finishing touches on the bridge and mainplate such as the beveling, chamfering, polishing, and brushing are done by hand, adding a personal touch to an extremely avant-garde timepiece.

The Audemars Piguet Ladies Royal Oak Concept Flying Tourbillon
The third major women’s release for AP this year (after the Millenary collection and the aforementioned Frosted Gold Double Balance Wheel Openworked) actually marks two firsts for the brand: the first Royal Oak Concept watch for women and the brand’s very first flying tourbillon. It’s an interesting move for the brand, but the watch is definitely eye-catching. It comes in white gold at 38.5 mm and will be available with either brilliant-cut or baguette-cut diamonds. Like the Diamond Outrage watch before it, this is the kind of watch that you can imagine a supermodel wearing on the red carpet or on the wrist of a Queen. 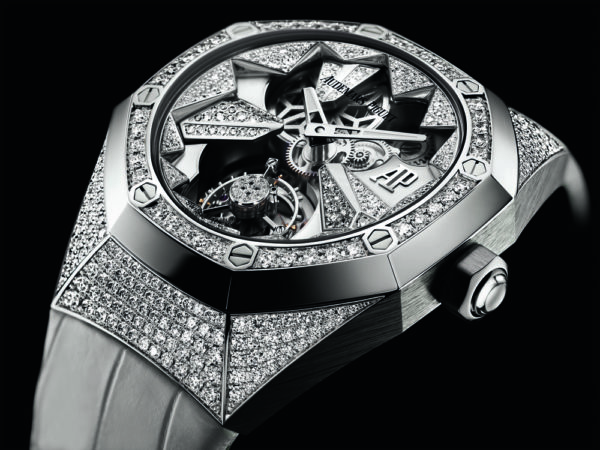 The Audemars Piguet Royal Oak Offshore Diver Two-Tone
Two-tone watches are as controversial as ever, but this take on the Royal Oak Offshore Diver, which is celebrating a quarter-century of existence this year, is as good a take on the mixed metal look as we’ve seen. While this watch is technically identical to previous iterations of the Royal Oak Diver, the pink gold case, gray titanium bezel, gray ceramic crowns, gray rubber strap, and gray dial, all give it an appealing look that screams masculinity. However, at 42 mm, it will look great even on those that have never stepped a foot in the ocean. 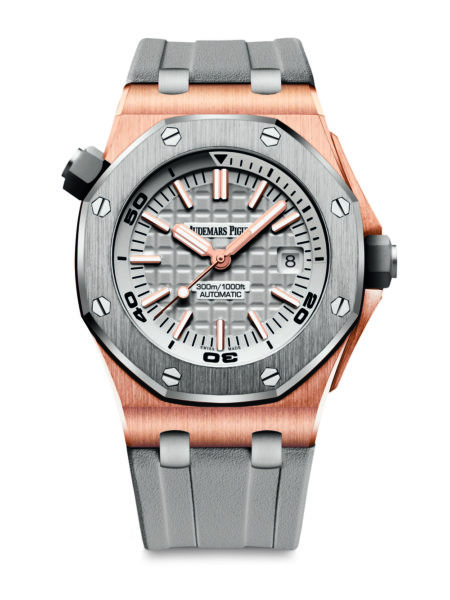 The Audemars Piguet Royal Oak Chronograph in Platinum
This is perhaps tied with the new Jumbo as my personal favorite Audemars Piguet pieces of the year. Something about that smoked gray dial combined with the black subdials really made my heart swoon. If you remember all the way back to last year’s SIHH, the Royal Oak Chronograph celebrated its 20th anniversary, with that birthday, we saw the size of the chronograph increase from 39 mm to 41 mm and a slight adjustment to the subdials and date window. Coming in platinum, that means two things: this watch will be very expensive and very heavy. Regardless of that, it’s a beautifully finished watch that checks off all the boxes on what people love about the Royal Oak Chronograph. 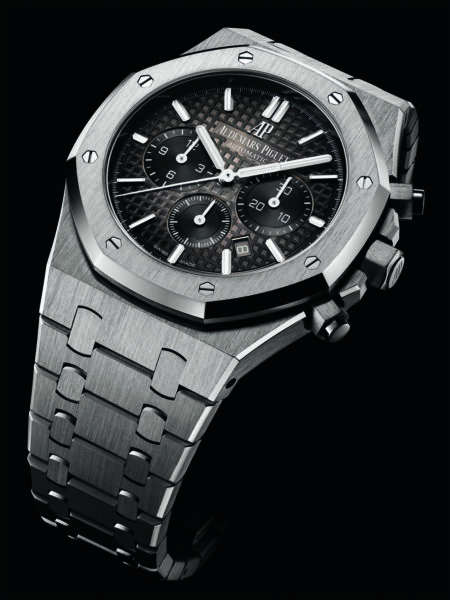 Here we go, the Granddaddy (or should I say Grande-daddy — sorry, bad joke) of all the Royal Oak Offshore models released this year has to be the Grande Complication in white and black ceramic. Featuring a minute repeater, perpetual calendar, and split-seconds chronograph, this watch is as badass as it gets. The white and black ceramic versions actually have a slight difference in how they were finished. The black ceramic was reinforced with yttrium oxide, making it seven times harder than steel. The white ceramic, on the other hand, was reinforced with aluminum oxide giving it a high gloss finish and making it even harder than the black ceramic version and nine times harder than steel. Personally, I like the black version slightly better, because even though the white version may be more technically advanced, there’s something extremely cool about an pitch-black, hyper-complicated, anniversary Royal Oak Offshore. 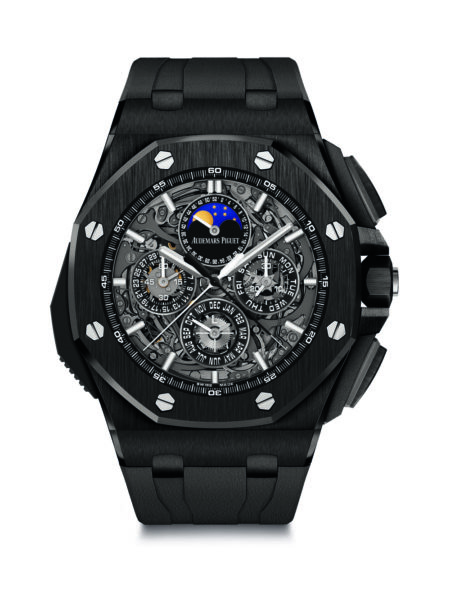 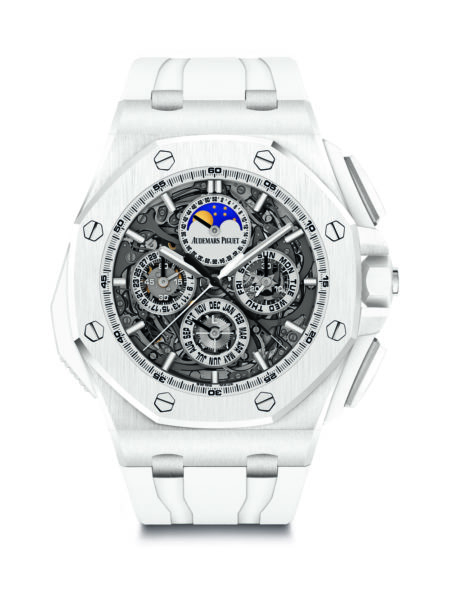