In its continuing quest to bring innovative materials from the world of high-end boating into its watch portfolio — particularly into its most marine-ready collection, the Submersible — Panerai has partnered with Brabus, a German engineering firm that customizes high-performance automobiles and other vehicles. One of those vehicles, the “Black Ops” line of luxury dayboats, provides the template for the first watch to emerge from the collaboration, the Submersible S Brabus Black Ops Edition. The “S” in the model’s name signifies its main talking point: it’s the first Panerai watch outfitted with a skeletonized automatic movement.

The watch, a limited edition of only 100 pieces, was three years in development, according to Panerai, and among its notable features is a patented, polarized date display at 3 o’clock, which allows the date disk to be viewed through an opening without covering up the mechanics of the openworked movement behind it. The 47-mm case is made of Carbotech, a robust composite material that Panerai has used in watch cases since 2015 (more detail on it can be found here), and includes the ratcheting unidirectional dive-scale bezel and patented Safety Lock crown-protecting device characteristic of the Submersible family of timepieces.

The case’s dark gray color and the dial’s red details harmonize to re-create the hallmark Brabus color palette of gunmetal gray, black and red. The German firm’s signature red color is used to accent the hour, minute and small a seconds hand as well as the pointer for the GMT hand. The skeletonized dial of the watch hosts the small seconds on a subdial at 9 o’clock that also features an AM/PM indicator, a useful feature when traveling and using the GMT hand to keep track of home time. Gray Super-LumiNova coats the hand tips and the circle hour markers. In the absence of a traditional dial, Panerai has silk-screened the “Panerai Submersible” text onto the front sapphire crystal.

The movement inside the 300-meter water resistant case is the new Caliber P.4001/S, based on the existing Caliber P.4000 and entirely developed and built at Panerai’s manufacture in the Neuchâtel, Switzerland. An off-center oscillating weight, made of high-density tungsten and engraved with an Officine Panerai logo, bidirectionally winds the mainspring, which stores a lengthy three-day power reserve in two barrels. In a novel design twist, Panerai has added an indicator for the power reserve on the back, rather than the dial side, of the skeletonized caliber. The sapphire disk used for this display is highlighted with Super-LumiNova for easy visibility behind the sapphire exhibition caseback. Like many in-house movements from Panerai, Caliber P.4001/S includes a device for stopping the balance wheel to easily reset the seconds in tune with a reference signal.

The Panerai Submersible S Brabus Black Ops Edition (PAM01240) is delivered with two straps, one a bi-material with gray fabric, tone-on-tone stitching, and a trapezoidal pin buckle in DLC-coated titanium; the other, a Panerai Sportech strap with a velcro closure. A special tool is included to easily swap between straps, along with a screwdriver to remove the buckle. The first timepiece to emerge from the partnership of Panerai and Brabus, described by the former as “a testimony to both brands’ roots in technology and craftsmanship,” carries a retail price of 45,000 euros.

END_OF_DOCUMENT_TOKEN_TO_BE_REPLACED 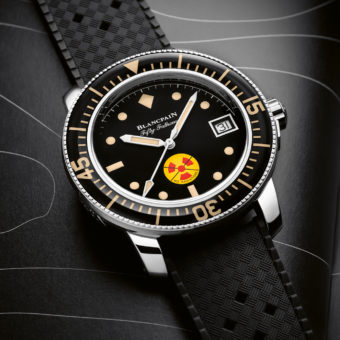