Citizen launched the original Eco-Drive Satellite Wave, the first watch to feature light-powered satellite timekeeping, in 2011, and has released updated versions with new innovations in the years since. Last year, the Japanese brand introduced the Citizen Satellite Wave World Timer GPS, an ideal timepiece for frequent travelers. Here’s how it works.

The Citizen Satellite Wave World Time GPS represents, according to the brand, “a new level” of timekeeping technology, the latest in a parade of world-firsts that includes 2013’s Satellite Wave Air (the first light-powered satellite-timekeeping watch in a full metal case), 2014’s Satellite Wave F100 (the thinnest such watch ever, with the fastest GPS reception time), and the Satellite Wave F900, launched simultaneously with the World Time GPS model at Baselworld 2015, which includes a chronograph function. The World Time GPS, which combines the record-setting reception time with the ability to receive signals worldwide, is a more affordable alternative to the F900, as it lacks a chronograph but also incorporates a perpetual calendar and a power-reserve indicator.

First off, you’ll want to adjust your time and calendar settings using the GPS reception. The ideal scenario is to be outdoors, with an unobstructed view of the sky (tall buildings and trees may interfere with reception, as will electronic interference and other atmospheric conditions), and the watch positioned away from your body with the dial pointing straight upward toward the sky rather than at an angle. With the crown in the closed position, press and hold the upper right button for 4 to 5 seconds. The hands will first move to indicate the light level, then return to normal time, before the second hand move to the eight-second position (indicating ‘RX-GPS’), at which point you release the button and satellite GPS signal reception commences. Upon a successful update, the second hand will rotate to show the current time zone for two seconds, then the time and calender (including leap-year setting) will update, after which the watch resumes normal timekeeping operation. (If, for whatever reason, the update is unsuccessful, the second hand will rotate to the 57-second position, indicating ‘NO’.) The entire operation should complete within two minutes, as it indeed did during each of my usages.

One thing the watch won’t do for you automatically is adjust for Daylight Savings Time (“SMT”). If you’re in a region that’s currently observing SMT, here’s what to do: Pull the crown out one click, which will send the seconds hand to the current time zone, as indicated by the city abbreviations on the outer bezel and +/- GMT numerals on the inner bezel (if you need to change this indication first, simply rotate the crown in either direction), and the “function hand” on the subdial at 8 o’clock to the “SMT ON” or “SMT OFF” position. To change from ON to OFF or vice versa, simply press and release the lower right button. Push the crown back in one click to resume timekeeping.

Manually adjusting the time and calendar (let’s face it, many of us are indoors — perhaps in an airport or cab — and out of range of GPS satellite signals when we think to change the time on our watch) is fortunately also quite easy.

Start by pulling out the crown to its first position, as described above, and rotating it to move the seconds hand to the proper time zone, which will then move the hour and minute hands to the correct time in that zone. For example, if you’ve just arrived in London from New York or Boston, you’d rotate the seconds hand from NYC to LON. Turn Daylight Savings ON of OFF, as above. (An added bonus that few world-time watches offer: the date in the window at 3 o’clock also moves backward or forward as you move through time zones.)
To manually change any or all indications, from minute to day, date, month and leap year, press and hold the upper right button until the second hand moves to the 30-second position, then release. The function hand on the 8 o’clock subdial will rotate to indicate the current weekday set in the memory, indicating the watch is in manual setting mode. Pull the crown out to its second position, which will move the seconds hand to the 12:00 position, indicating that the minutes may now be set: this is done easily by rotating the crown in either direction. Afterward, press and release the lower right button, which will then nudge the hour hand slightly, indicating the watch is ready for you to set the hour.
To make sure you’re setting the correct 12-hour time (AM or PM), rotate the crown clockwise until the function hand starts to rotate. Using the time shown as “nighttime” reference, rotate the crown to set the current hour. For example, if the dial reads 12:00 as the function hand starts rotating, assume it is 12:00 AM and set accordingly. After again pressing and releasing the lower right button (as you’ll do between each of the steps), and seeing the function hand move  back and forth, re-set the month, leap year, date, and day of the week by means of the bidirectional rotating crown. (The months and leap years are indicated on the dial as shown below. The days of the week are on the 8 o’clock function subdial, along with the power-reserve display.) As a final step, you’ll want to rotate the crown a click or two to correct for the minutes that may have elapsed during the calendar settings. Push the crown back in two clicks to its closed position and your Citizen watch is good to go (Citizen says that the perpetual calendar is accurate until at least the year 2100) and attuned to wherever in the world your latest adventure has taken you.

Despite its undeniable utility and sportiness, the Citizen Eco-Drive Satellite Wave World Time GPS is a handsome watch that I found looked utterly at home peeking out from the cuffs of a dress shirt and suit jacket. It is quite comfortable on the wrist and surprisingly light — probably due to the lightweight materials in the dial that are necessary for the Eco-Drive system’s light absorption capability and also owing to the overall thinness of the case. I had to check to see that I was actually wearing steel rather than polished titanium. And in contrast to its big brother, the tri-compax, chronograph-enabled F900, this watch’s clean, less cluttered dial makes reading just about all of the functions at a glance quite simple. The Citizen Satellite Wave World Time GPS is available at retail in the fall and will sell for $1,150.

END_OF_DOCUMENT_TOKEN_TO_BE_REPLACED 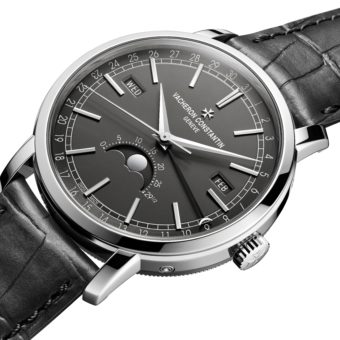