According to an old joke, Albert Einstein once said that he wanted to die in Switzerland, not elsewhere, “because everything happens 20 years later there.” This year, Baselworld proved Einstein wrong: the array of smartwatches on display proved the Swiss can be as up-to-date as anyone. Here’s a rundown of some of the smartwatches that debuted, or whose upcoming debut was announced, at this year’s Baselworld watch fair (most, but not all, come from Swiss brands):

• Sister brands Frédérique Constant and Alpina both showed analog watches that connect with apps on an Apple or Android phone, enabling the wearer to track his or her physical activity and sleep. The wearer can see data for sleep and activity in a subdial at 6 o’clock, and in more detail, on the phone. The watch, called the Horological Smartwatch, also alerts the wearer when he or she has been sitting too long and needs to get some exercise (more info here). At a press conference at the show, Peter Stas, CEO of the brands’ parent company, the Frédérique Constant group, noted that sleep/activity tracking is the most successful wearable application on the market: 20 million people worldwide use such an app. The watches, equipped with two-year-plus batteries, are priced from $995 to $1,295 for the Frédérique Constant model and $1,150 to $2,595 for the Alpina. They come in 10 styles and will go on sale in June. They are the products of a joint venture called MMT (Manufacture Modules Technologies Sàrl) formed by the Frédérique Constant group and the Silicon Valley-based Fullpower Technologies, Inc. MMT, like the Frédérique Constant group, is based in Plan-les-Ouates, on the outskirts of Geneva, and its modules are Swiss made. MMT licenses the watches’ technology, known as the MotionX-365 Horological Smartwatch Platform, to other Swiss watch companies, including Mondaine (see below).

• Mondaine, best known for its Swiss-railroad-clock-inspired watches, incorporated the MotionX-365 platform into a new watch called the Mondaine Helvetica No. 1 Horological smartwatch. Like the Frédérique Constant and Alpina smartwatches, the Mondaine watch shows activity and sleep information on a subdial at 6 o’clock. The watch will be launched in the fall and be priced at less than $900.

• On a very different note, Bulgari  introduced a watch called the Diagono Magnesium concept watch, which enables the wearer to have secure, 24/7 access to his or her most secret data: account numbers and passwords, passport numbers, building entry codes and the like. The watch has a mechanical movement, made in house. (The watch is called the Magnesium because the middle section of its case is made of that metal.) It also has a cryptographic microchip, made by the Swiss company WISeKey, and an invisible antenna. When the wearer holds the watch close to his or her smartphone, the watch, using Near Field Communication (NFC) technology, is able to “open” what Bulgari calls the “Bulgari Vault.” The Vault is an app that stores the sensitive information in an encrypted form. When the Vault is “opened,” the information is unencrypted and displayed on the phone. The Vault can be opened only by the watch and only when the watch is very near the phone. According to Bulgari, the encrypted information is stored on a server buried in a military bunker at an undisclosed location in the Swiss Alps. If the phone is lost or stolen, the information will be destroyed, but can be restored if the phone is recovered. Bulgari says the usefulness of the watch’s “key” function will expand in the future. It will one day be able to open doors, say, or set house alarms or make payments. No price or launch date has been set for the watch. A spokeswoman for Bulgari said it would probably come out in 2016.

No Responses to “The Wearables Arrive: The Scoop on All the New Smartwatches From Baselworld 2015” 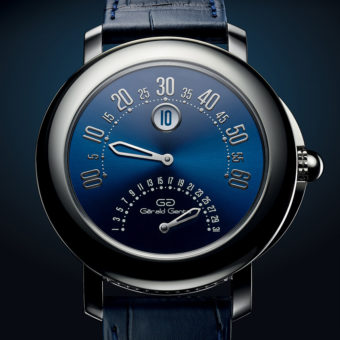 END_OF_DOCUMENT_TOKEN_TO_BE_REPLACED

TAG Heuer Declares “We Outside” ...