As you may be aware, this year marks 50 years since Neil Armstrong and Buzz Aldrin became the first people to set foot on the moon. For Omega (and watch enthusiasts everywhere), this means that 2019 is also the 50th anniversary of the Speedmaster becoming the first timepiece to make it to the lunar surface. Joining the Omega Speedmaster Apollo 11 Limited Edition in the brand’s new Moonshine gold alloy that launched earlier this year, is a commemorative, limited-edition Speedmaster in stainless steel.

Limited to 6,969 pieces, the new Omega Speedmaster Apollo 11 50th Anniversary Limited Edition in stainless steel features a polished bezel made of the same Moonshine gold alloy that made its debut in this year’s previous limited edition that has already sold out of its 1,014 piece run. Paler in hue than yellow gold, Moonshine gold is also notable for its high resistance to fading of color and luster over time and is composed through a blend of gold, silver, and palladium. The bezel ring on the new watch comes in polished black ceramic with a Ceragold tachymeter scale.

The special, commemorative features of this release include the 9 o’clock subdial that features a laser engraving of Buzz Aldrin climbing the ladder of the Eagle lunar module on to the surface of the moon. This register is built in Moonshine gold and has gone through a blackening treatment. Additionally, a more subtle nod to the watch’s background is two small markings — again in Moonshine gold — at 11 o’clock that form the number 11, a reference to Apollo’s mission number.

The dial itself is separated into two separate sectors that include a central varnished gray zone where the subdials and branding are located and an outer blackened area. Moonshine gold is used for the beveled indexes, the vintage OMEGA logo, and the hands – including the central chronograph seconds hand, which has gone through an additional PVD treatment.

The 42-mm timepiece comes on a metal bracelet that has been polished and brushed. Eschewing the contemporary Omega branding, the commemorative watch features the vintage Omega logo on the clasp. Omega says this bracelet design was inspired directly by the bracelet of the fourth-generation Speedmaster  (ST 105.012-65) that dates to before the Speedmaster went to space. An additional Velcro strap in blackened cork with golden marks is included with each of the models as well. The material choice for the extra strap references the Apollo-era “boost protective cover” — a fiberglass structure covered with a thick cork ablator that fit over the Command Module like a glove, keeping the crew of the Saturn V rocket safe from the intense heat produced at launch.

The closed caseback includes a number of references to the Apollo 11 mission as well, with a laser-engraved footprint representing humankind’s first step on the moon. Above and below the footprint on the lunar surface is Neil Armstrong’s famous quote inscribed in Moonshine gold-plated lettering: “That’s one small step for a man, one giant leap for mankind.”

Inside the limited-edition timepiece is Master Chronometer Caliber 3861 that made its debut in the Moonshine gold LE earlier this year. Just like Caliber 861 that powered the original Moonwatch, the movement is manual-wound and equipped with a chronograph function. The new caliber, however, includes a host of contemporary Omega elements like the Co-axial escapement and a silicon balance spring. 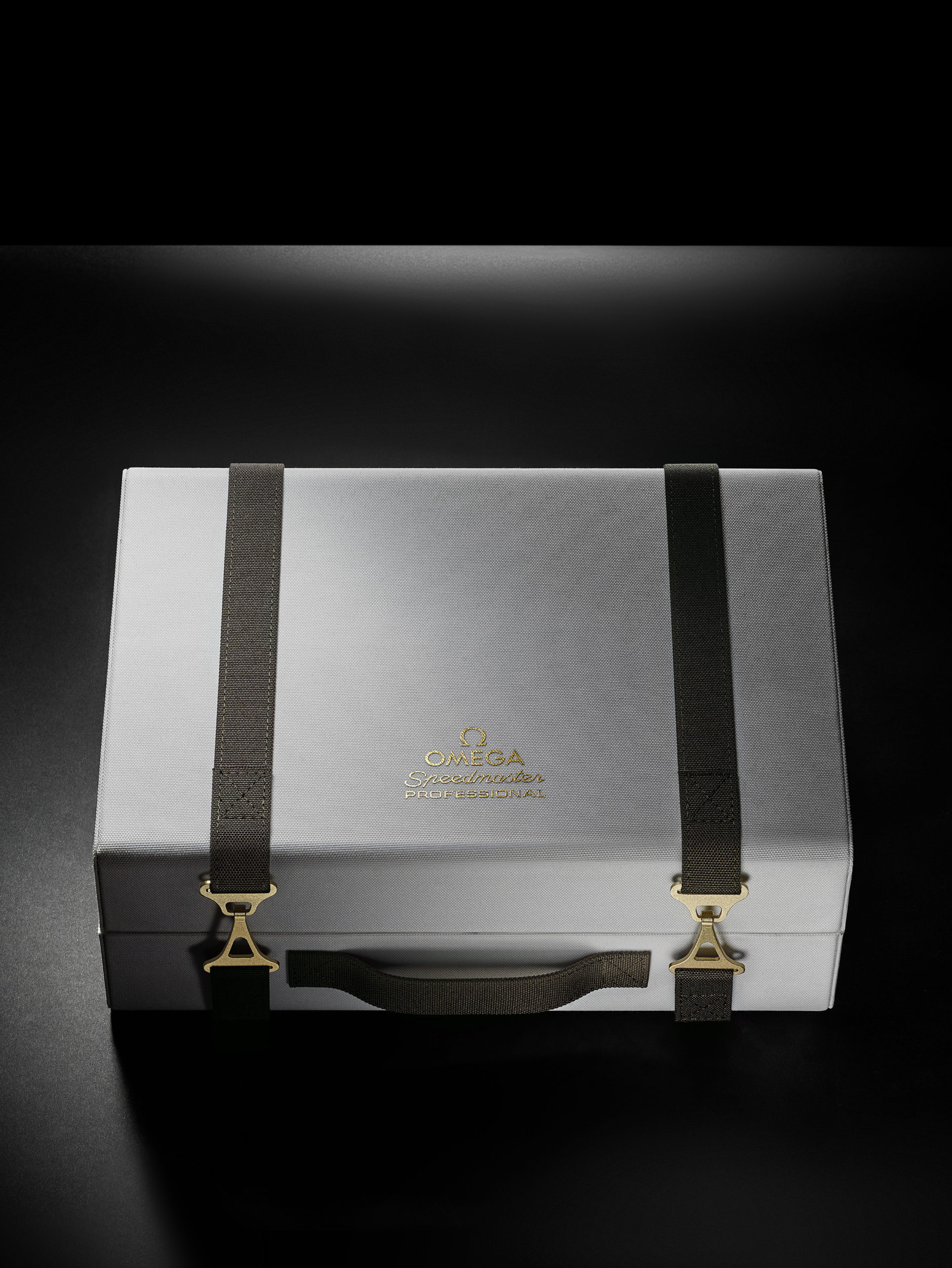 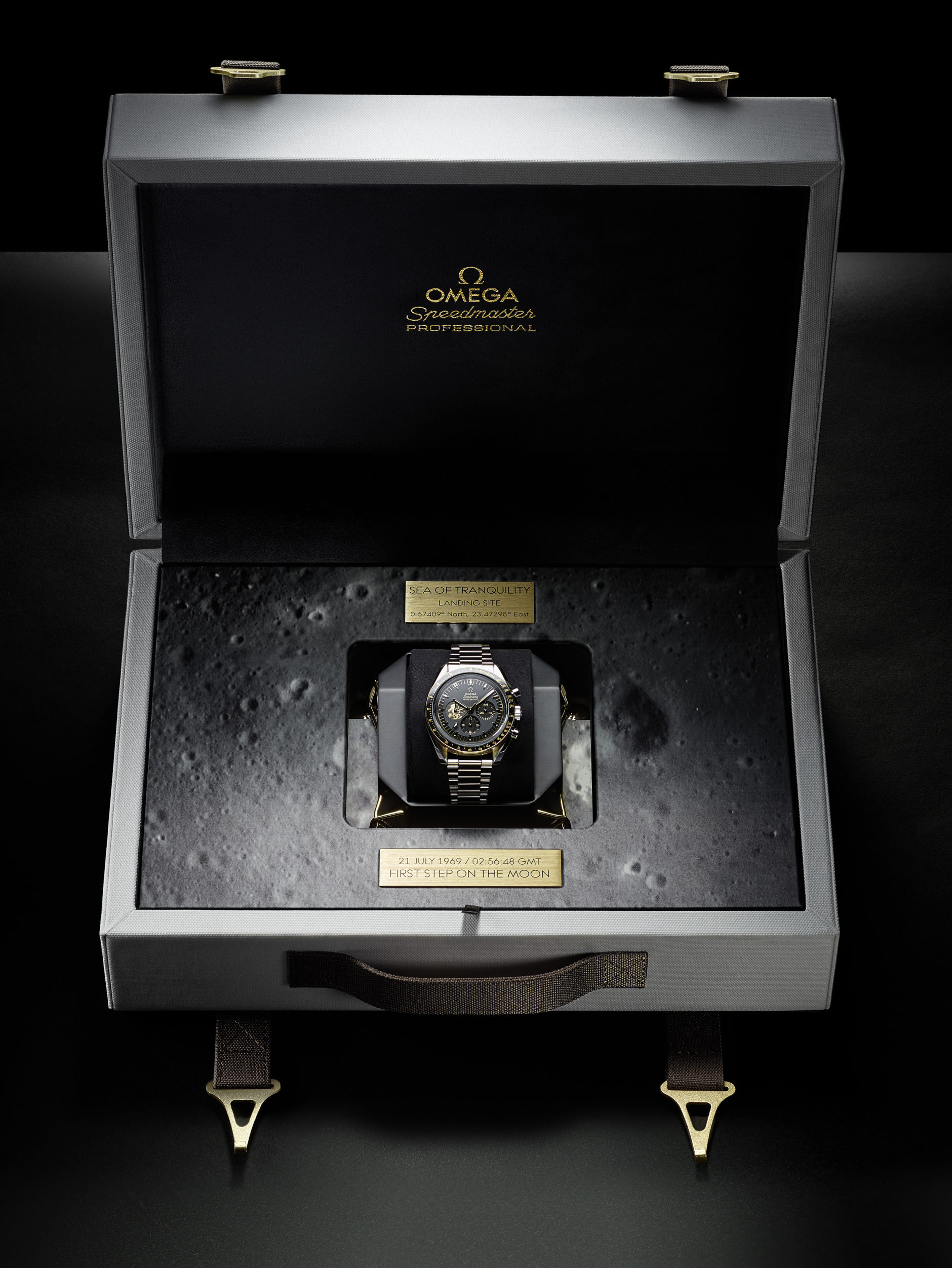 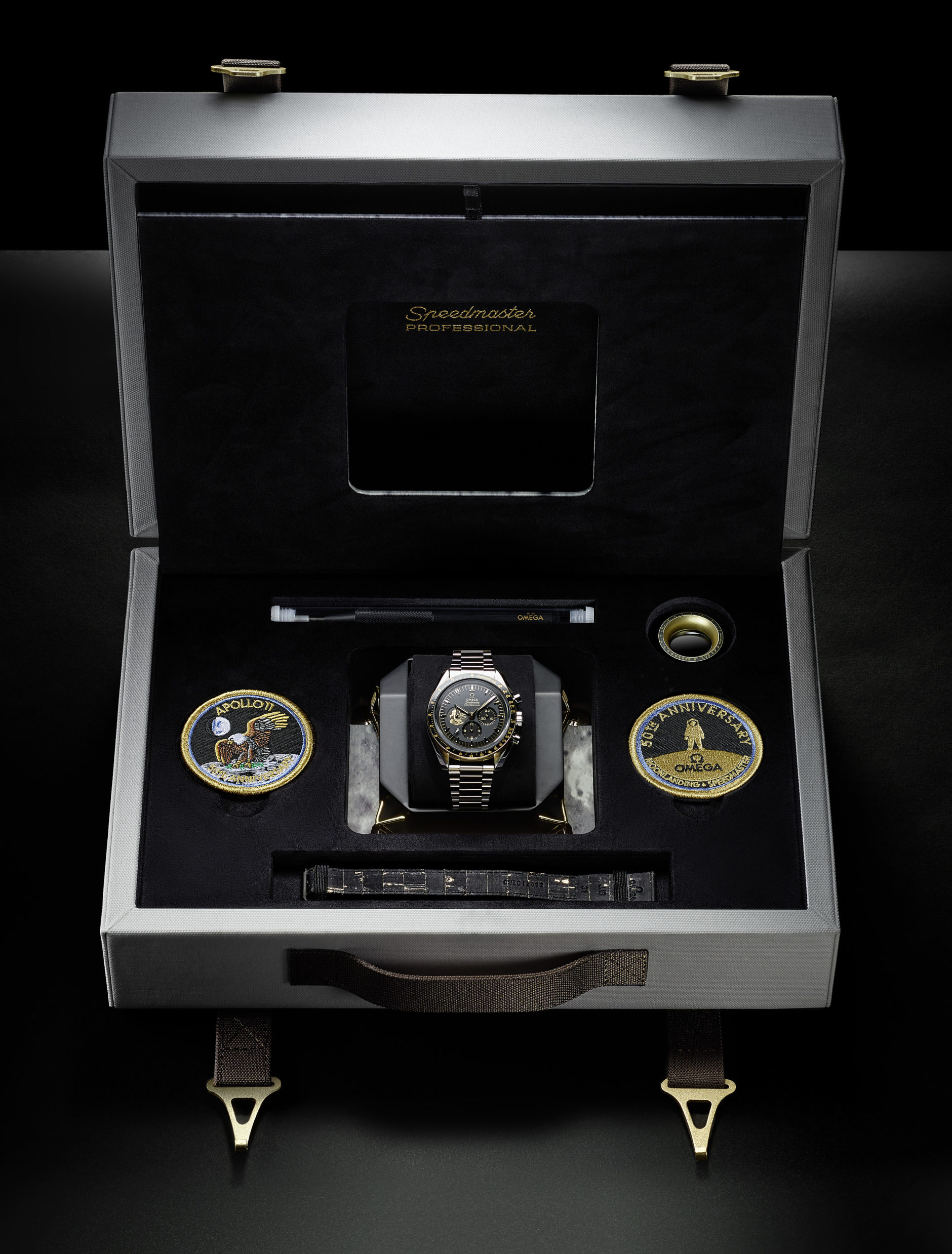 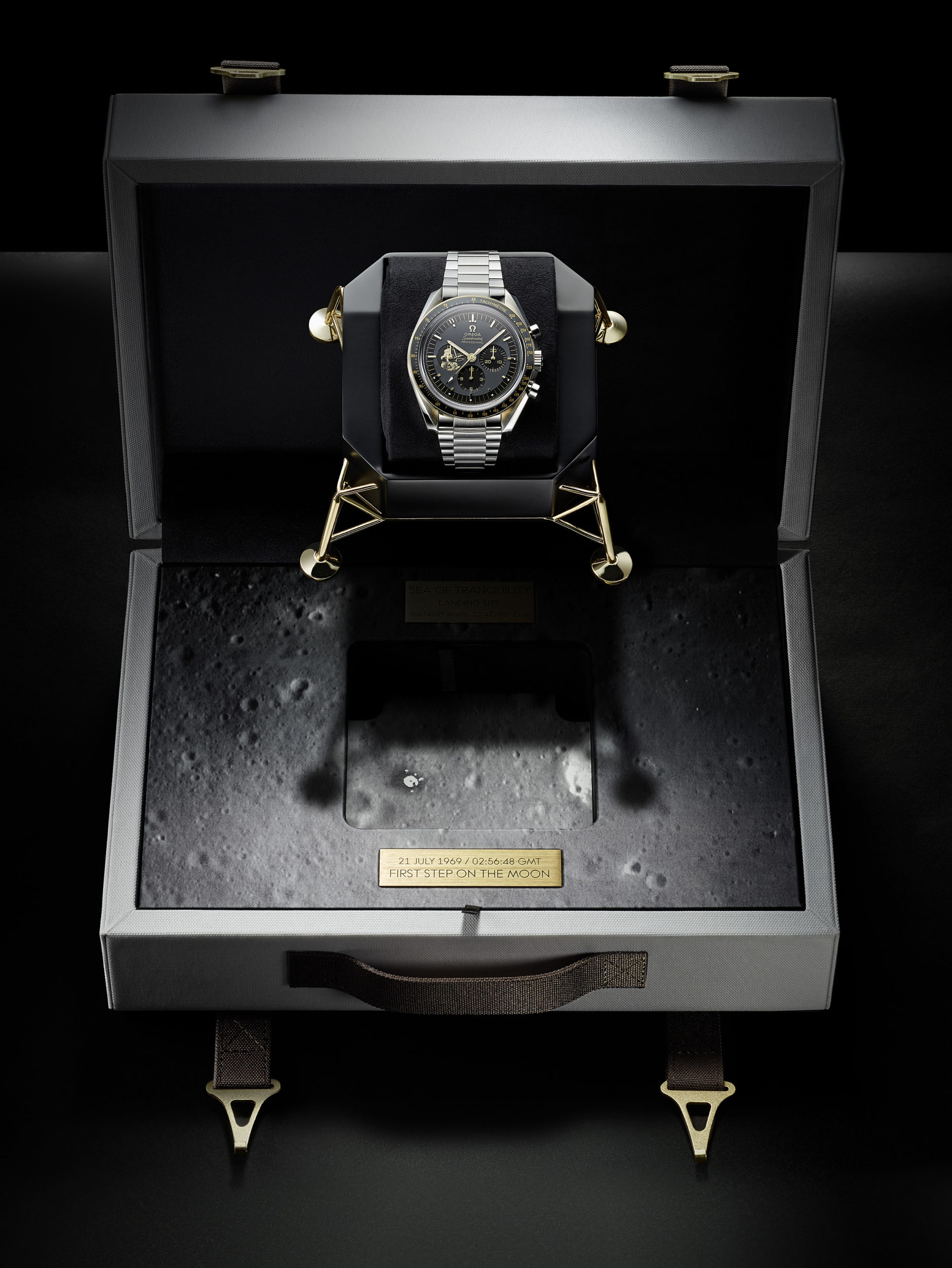 Each watch will be accompanied by a special presentation box that includes two mission patches (50th anniversary/ Apollo 11), two engraved plates (landing site coordinates/ landing site and time) as well as the additional velcro strap and a strap changing tool. Finally, the Omega Speedmaster Apollo 11 50th Anniversary Limited Edition in stainless steel comes on one of the coolest display stands you’ll ever find and something entirely fitting for this special anniversary edition: a lunar module.

The  Omega Speedmaster Apollo 11 50th Anniversary Limited Edition in stainless steel is priced at $9,650 and will be available later this summer.