A few of the NASA veterans at that 1969 dinner may have also been present at the launch of the 50th anniversary edition, which took place during a gala dinner served underneath the Saturn V rocket and also attended by Omega’s most well-known celebrity ambassador, actor George Clooney, and his wife Amal Clooney. Clooney was joined on stage by Lieutenant General Thomas Stafford, veteran of four NASA space missions and commander of the Apollo 10 mission; Apollo 16 lunar module pilot and Apollo 11 CAPCOM Charlie Duke; and Omega CEO Raynald Aeschlimann. Duke is among the four living humans who have set foot on the lunar surface. Also in attendance was former NASA engineer James H. Ragan, the man who designated the Omega Speedmaster “flight-qualified by NASA for all manned space missions” way back in 1965, over competitors from other watch brands like Longines and Rolex. 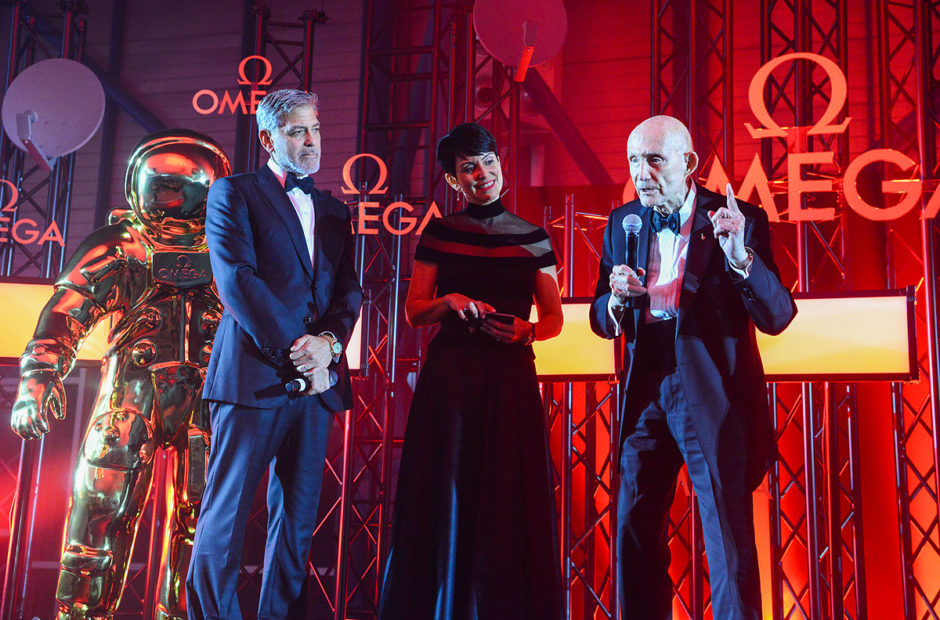 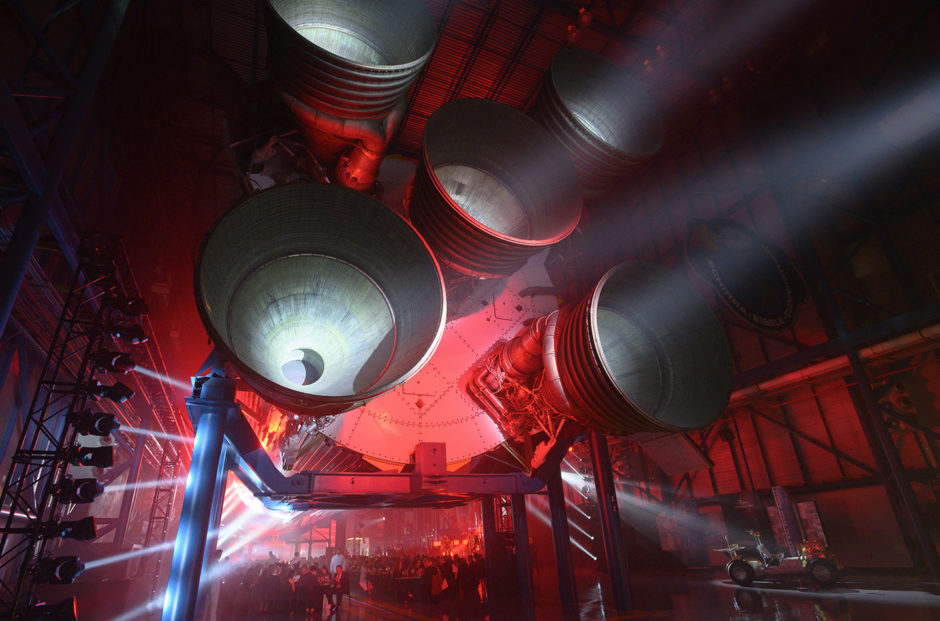 2/3
Dinner was served under the Saturn V rocket. 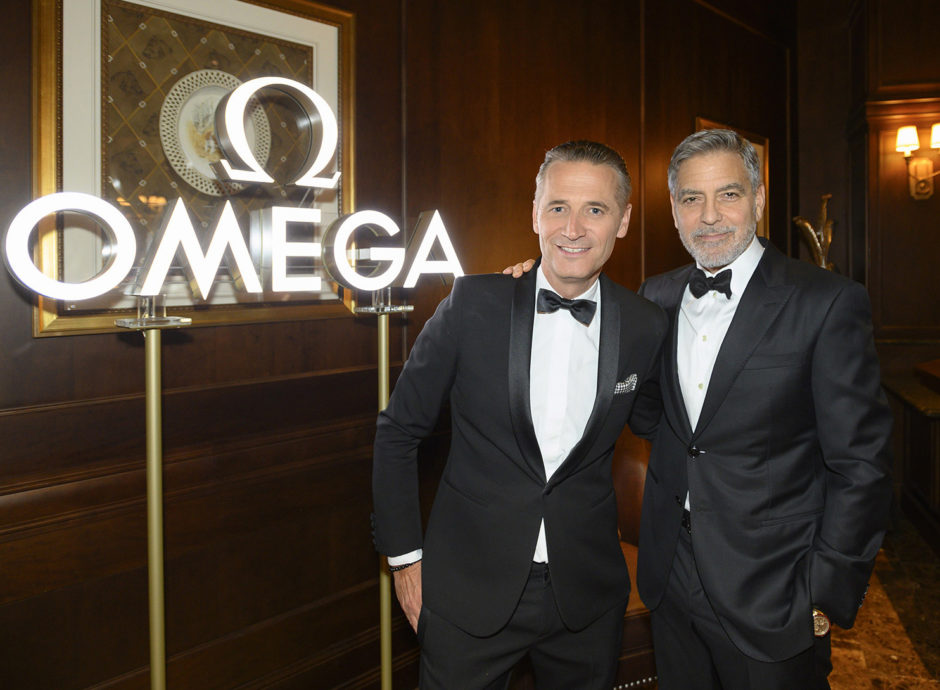 Like its 1969 predecessor, the new watch is also limited to 1,014 numbered pieces, all of them available to consumers (only numbers 33 through 1,000 of the original reference were offered for sale to the public). For its 42-mm case, Omega has debuted a new alloy called Moonshine gold. Paler in hue than the 18k yellow gold used for the vintage model, Moonshine gold is also notable for its high resistance to fading of color and luster over time, according to Omega. This alloy, composed of gold, silver, and palladium is also used for the bracelet, with its five arched links per row and combination of brushed and polished finishes, as well as the dial and its indices and hands.

The caseband of the Anniversary model retains the distinctive asymmetrical design of its ancestor, while the burgundy bezel of the modern watch is made of high-tech ceramic rather than aluminum. The bezel’s tachymeter scale — an element that hearkens back to the Speedmaster’s pre-Moonwatch days as an auto-racing-inspired chronograph — is executed in another Omega-exclusive material, a ceramic-gold mixture called Ceragold. The dial, with its vertically brushed finish, is marked “Au750” to call attention to its being made of solid gold. Faceted black onyx indexes mark the hours and the skeletonized hour and minute hands are filled with black varnish. The central chronograph subdial hand is also black varnished, as are the hands for the subdials at 3, 6, and 9 o’clock.

The other notable difference, and technical upgrade, from the 1969 watch is the use of a new, Master Chronometer-certified movement, the Omega Caliber 3861. Like the original model’s Caliber 861, the movement is manual-wound and equipped with a chronograph function. The new caliber, however, includes a host of contemporary Omega elements like a co-axial escapement and a silicon balance spring, in addition to being enhanced for this special edition with a gold-plated mainplate and bridges. Unlike its predecessor, this movement is not hidden by a solid engraved caseback but on display through a sapphire window — though the caseback is nevertheless still quite special. Its periphery features an engraved “1969-2019” and the watch’s limited edition number highlighted in burgundy; an inner ring with blue and black PVD color treatments that features on one side a partial map of the American continents focused on the Apollo 11 lift-off site at Cape Canaveral, on the other a meteorite inlay representing the moon; and polished anniversary text reading “Apollo 11 – 50th Anniversary” and “The First Watch Worn on the Moon.”

Even the packaging of the 2019 Limited Edition is evocative of the original’s special “moon crater” box. The modern watch’s box features a new crater-inspired design with gray ceramic side panels 3D-printed with lunar surface imagery and a top panel printed with a rendering of the moon’s Sea of Tranquility. THE

The release of the 50th Anniversary timepiece was the centerpiece of a truly star-filled anniversary event. And while it was Clooney who drew the lion’s share of media attention, the actor himself was determined to shine the spotlight on his fellow guests. “It’s a great pleasure to be here — and an honor,” Clooney said. “I have enormous respect for the people who made the Apollo missions such a success.” Aeschlimann added, “It’s a huge achievement to land on another world. I can’t think of a better reason to raise a glass in tribute.”