Continuing on the Omega trend is the Speedmaster “Ed White” Ref. ST 105.003-65 (Lot #90) from 1968. This is the same Speedmaster reference that passed NASA’s round of testing helping eventually earn it the iconic Moon Watch moniker. This particular model was the last Speedy with straight lugs known as “Pre-Professional.” The “Ed White” nickname was given after White became the first American astronaut to walk in space outside the space module during the 1965 Gemini IV mission. The current bid is at $6,000 and it’s estimated to settle between $8,000 and $12,000. Full listing here. 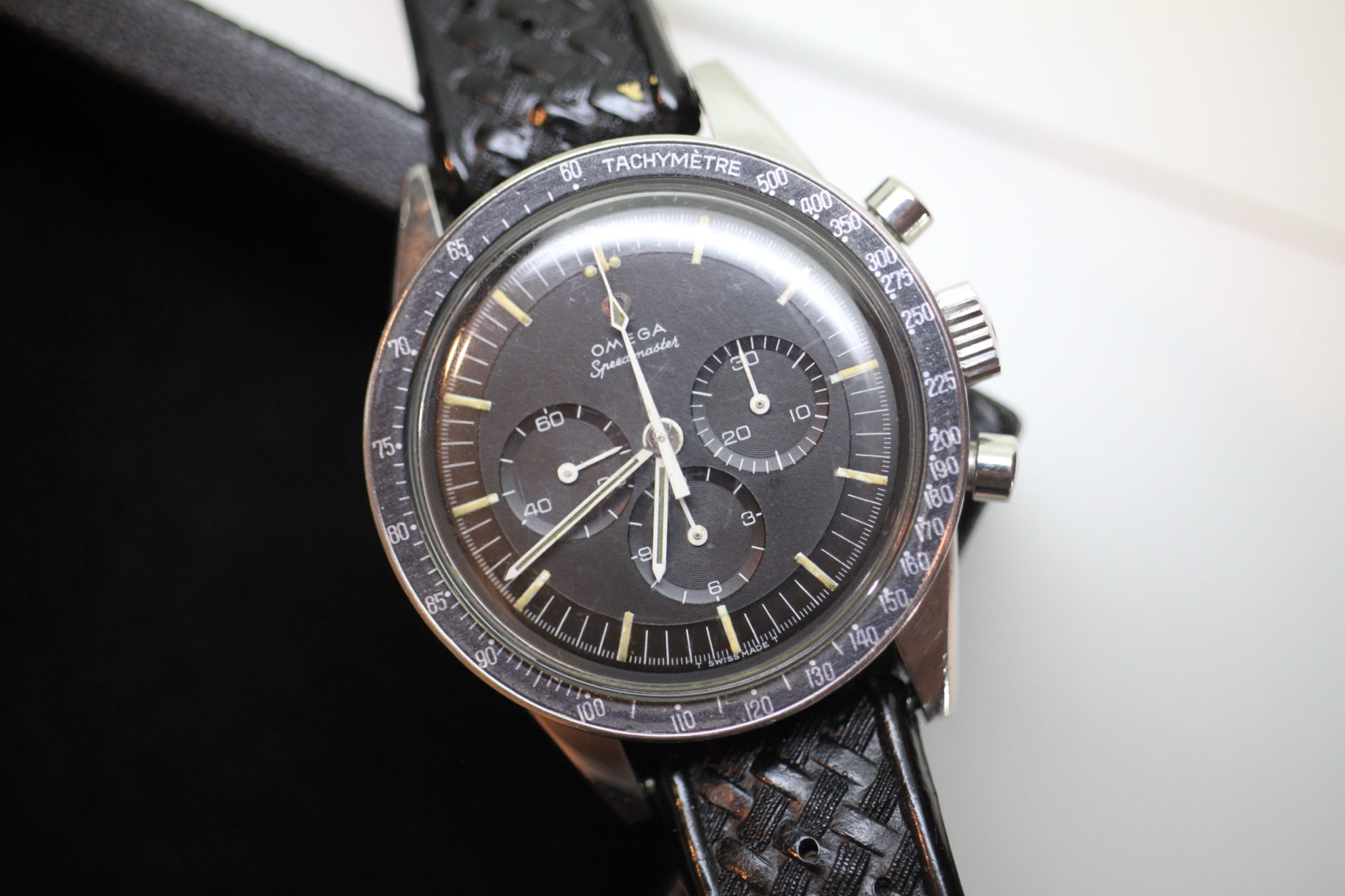 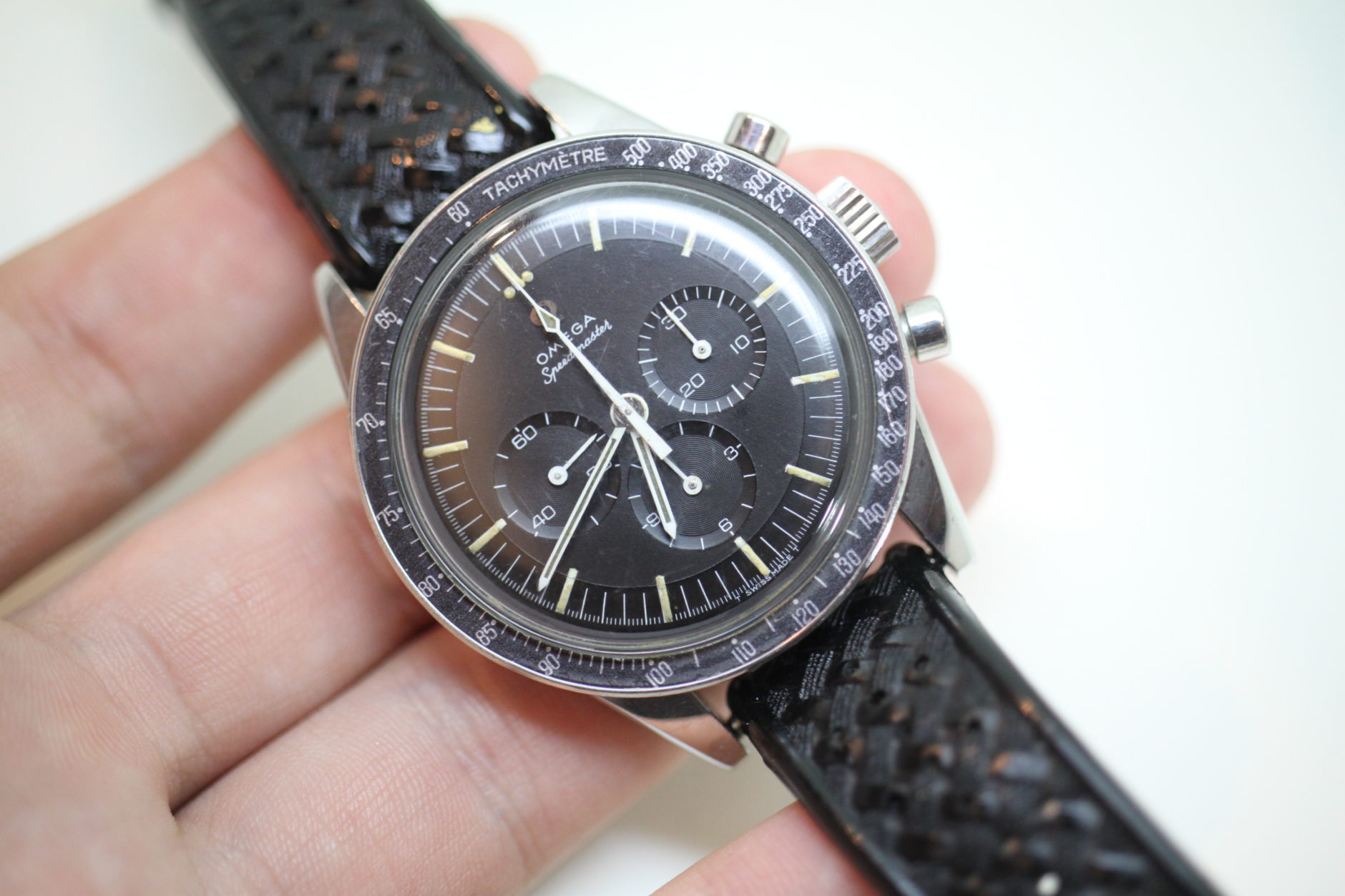 The Omega Speedmaster “Dot Over 90” (Lot #91) is actually the same reference as the previous model but has a slightly higher stature among collectors given its year of production (1965). The major difference between Lot #90 and #91 is the fact that this model comes on a bracelet and has its box and papers included. The “Dot Over 90” nickname comes from the dot on the bezel placed on top of the “90” marker on the tachymeter scale. It’s a way Speedmaster enthusiasts are able to identify whether or not a model is “Pre-Professional” or not. The current bid is double the price of Lot #90 at $12,000 and is estimated to settle between $15,000 and $25,000. (Pro tip: Always keep your box and papers!) Full listing here.

The world of vintage Rolex Daytonas is as thrilling as anything in the watch industry and continues to grow. What we have today is a Reference 6239 (Lot #188), better known as the very first entry in the iconic Daytona line. Originally available in stainless steel and either 14k or 18k gold, the 6239 was the brand’s first chrono with the tachymeter scale engraved on the bezel and is noted for featuring inverse subdials printed in a different color than the dial (for enhanced legibility) for the first time. This model is from 1965 so it isn’t quite as rare or collectible as the Mark 1 series (1963) with all its subtle distinguishing characteristics, but it’s still the very first Daytona and would be a defining acquisition for any discerning collector. Prices, while high, also haven’t quite reached the heights of other Daytona models as well. The current bid is at $32,000 and it’s estimated to settle between $30,000 and $50,000. Full listing here.

This flashy, 18k gold Daytona (Lot #189) won’t be for the conservative collector, but for the enthusiast that wants a watch that stands out both on the outside and on the inside, it could be a worthwhile purchase. The Daytona Ref. 16518 from 1996 uses the renowned Zenith 4030 movement and has risen in both profile and collectability over the past decade. Rolex switched to using an in-house caliber inside the Daytona during the year 2000, so the presence of “Zenith” Daytonas in the auction world continues to develop as collectors realize what they have in their collection. The current bid is at $18,000 and it’s estimated to settle between $15,000 and $25,000. Full listing here. 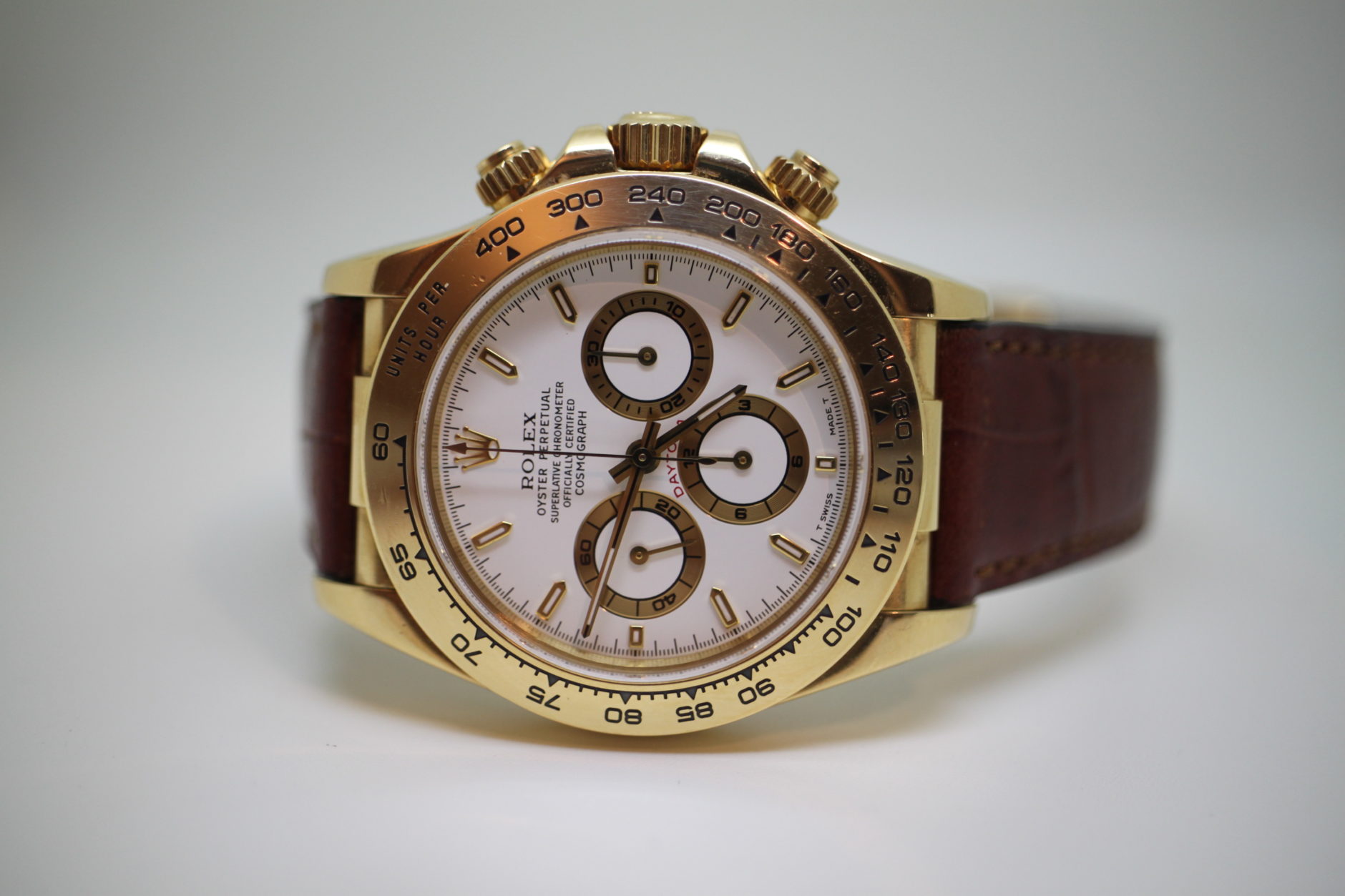 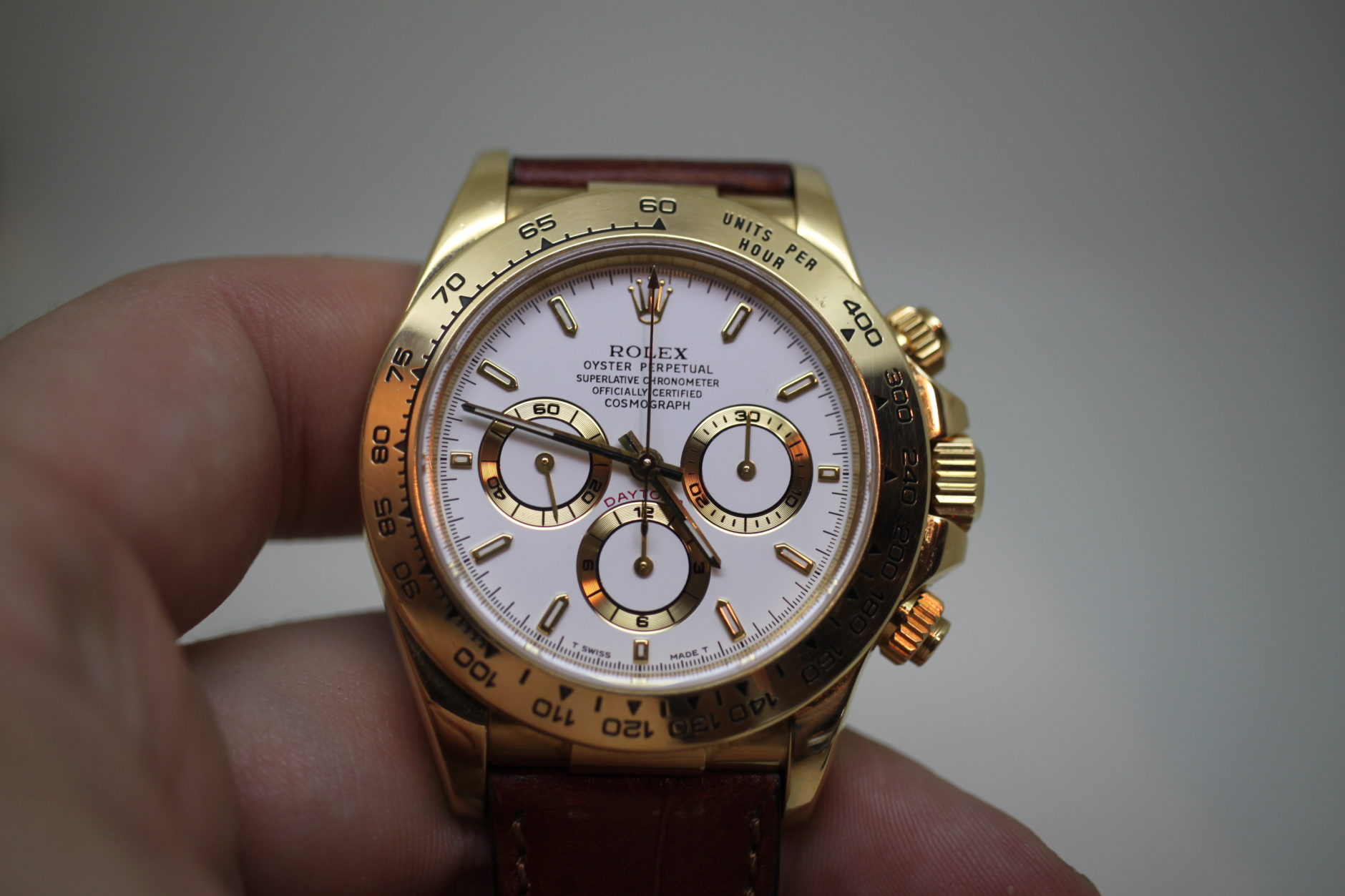 Nicknames are highly important in the world of vintage watches. They help distinguish certain models and are much easier to remember for enthusiasts (and journalists) than reference numbers. This is especially true in the world of Rolex collecting. While soda brands and deceased celebrities are the most well-known Rolex noms de guerre, the “Fat Lady” GMT-Master II (Lot #196) is equally collectible. Given the name thanks to its extra thick case and crown guards, the Ref. 16760 is celebrated for the introduction of Cal. 3085, which was the first Rolex movement that allowed for independent adjustment of the hour hand from the GMT hand, making it much easier to set the second time zone. This also enabled the rotating bezel to be used to calculate a third time zone if desired. The “Fat Lady” was also the first Rolex GMT model to be produced with a sapphire crystal, the first official “GMT-Master II,” and served as the debut for the first Coke (red and black) bezel. This model is in excellent condition and is currently at $7,500 with an estimate between $10,000 and $15,000. Full listing here.

This Rolex Submariner Ref. 5512 from 1966 (Lot #165) has already received the most press out of any piece in the “Falling for Time” auction due to its condition and rarity. It comes from the family of the original owner and features the original bezel insert, dial, hands, bracelet, and case bevels. What it’s most celebrated for is the rare blue-gray tint of the bottom two lines of text on the four-line, matte dial (see the second image of the slideshow below). While Submariners with a red script (Red Subs) have long been a presence in the auction world, this blue script hasn’t been as publicized and is an interesting new development in the world of Rolex collecting. The current bid is at $15,000 and it’s estimated to settle between $15,000 and $25,000. Full listing here. 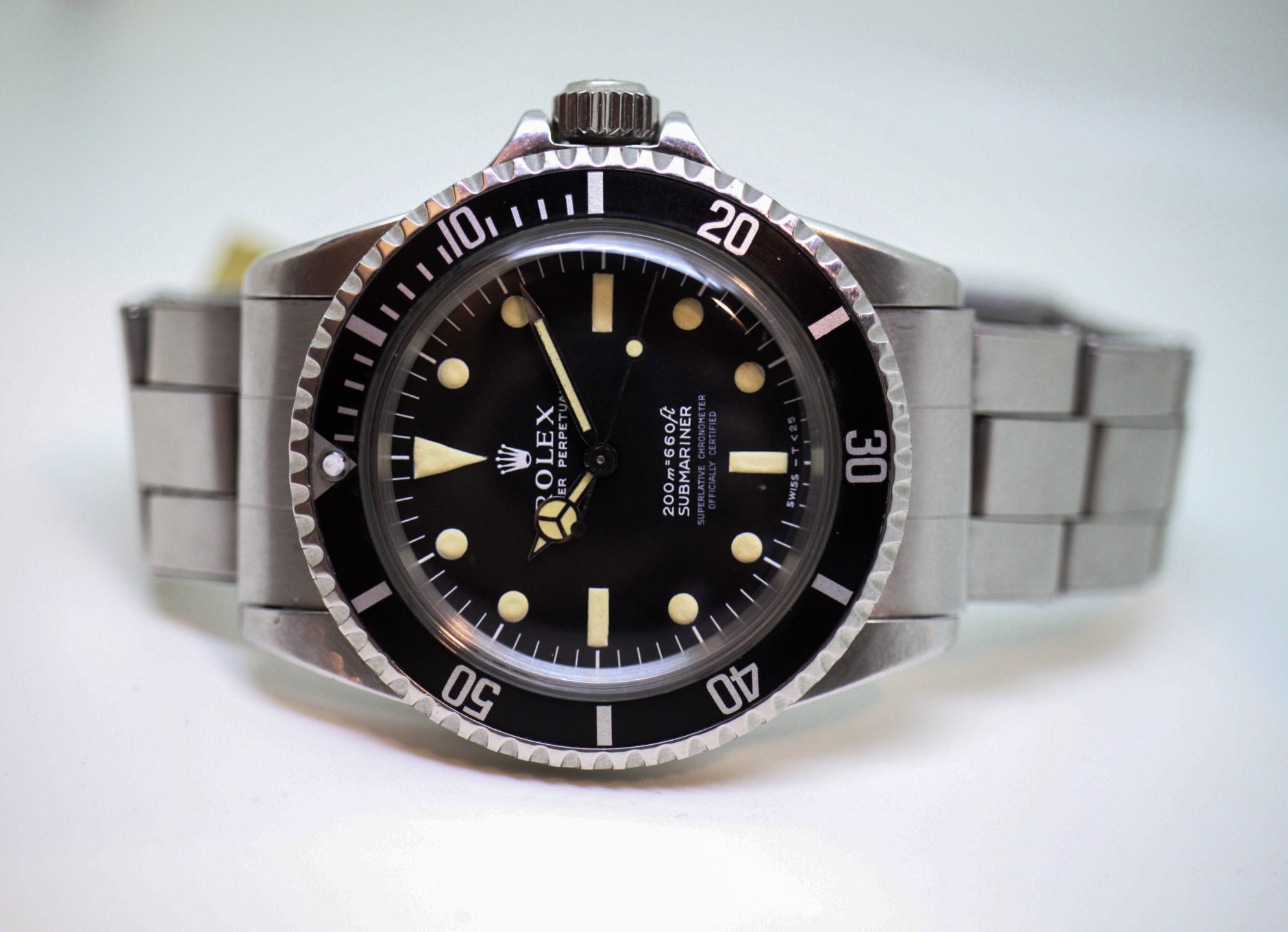 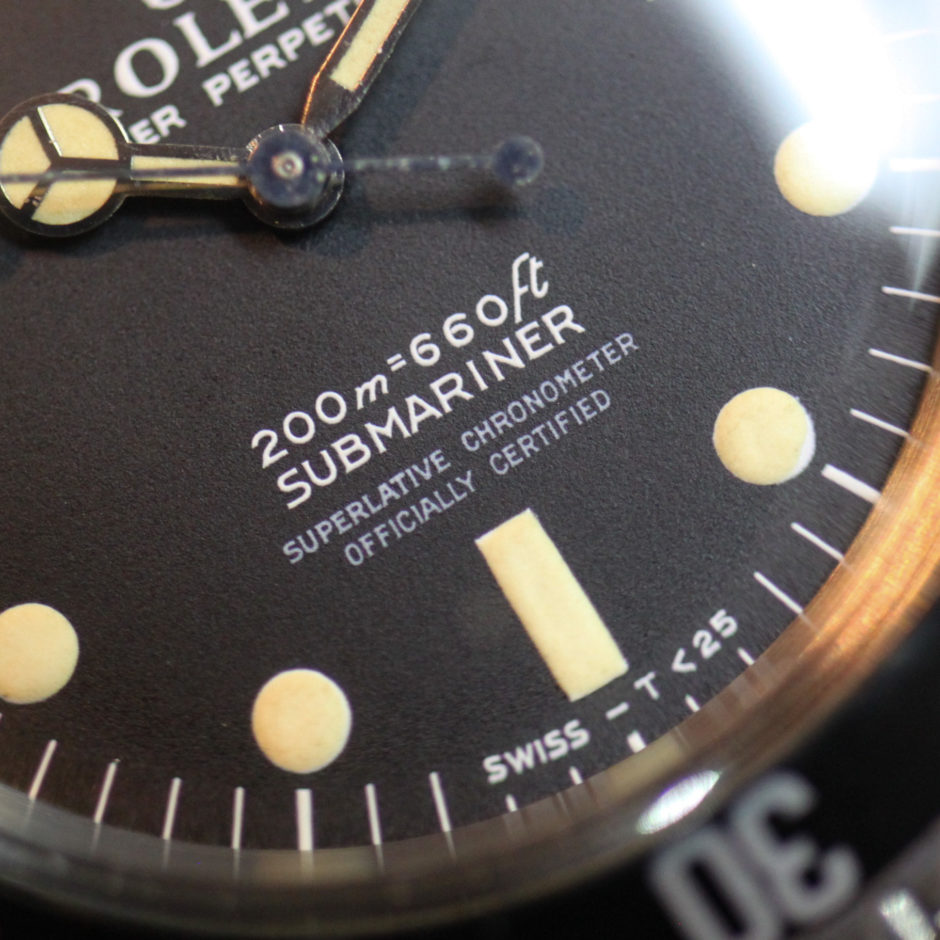 One watch that I’ve always felt has been undervalued by collectors is the Patek Philippe Beta 21. A product of its time, the watch is Patek Philippe’s first foray into the world of quartz watches. While not as well known as the Beta 21 Ref. 3597, the Ref. 3603 up for sale (Lot #211) is plenty cool in its own right. In 1962, Patek Philippe joined 20 other Swiss watch brands in creating the Centre Electronique Horloger (CES) to compete with the looming threat of Japanese quartz watches. The Beta 21 movement was released in 1969 and this model in white gold with a leather strap was released to the public in 1974. It’s an early model in the 3603 series that was produced from 1973 to 1982 and one of very few in white gold on a leather strap. In fact, according to Christie’s, less than 15 examples in white gold on leather have come to market. Another interesting factoid is that the 3603 was the largest watch produced by Patek Philippe until the 21st century. The current bid is at $8,000 and it’s estimated to settle between $10,000 and $14,000. Full listing here. 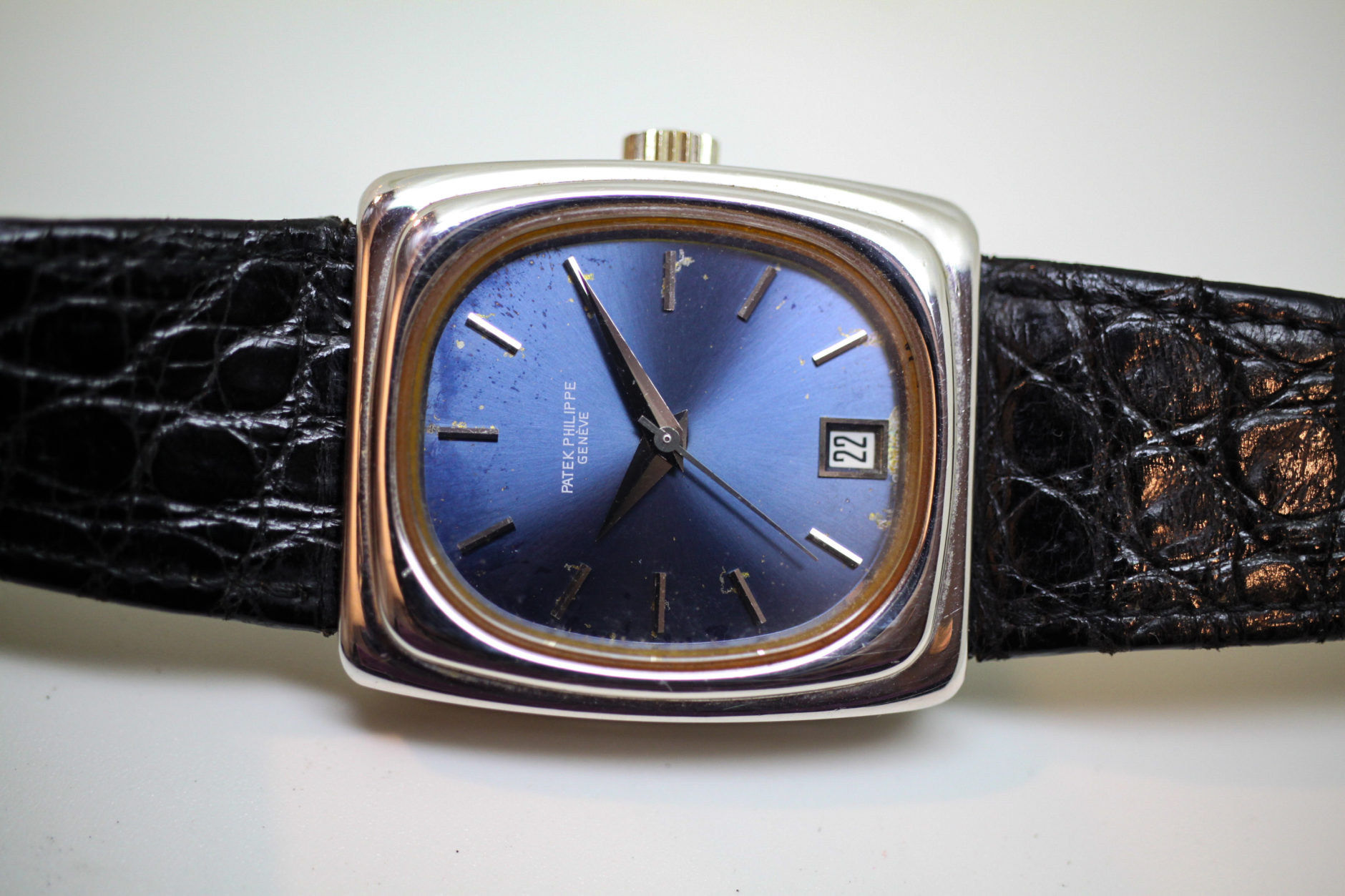 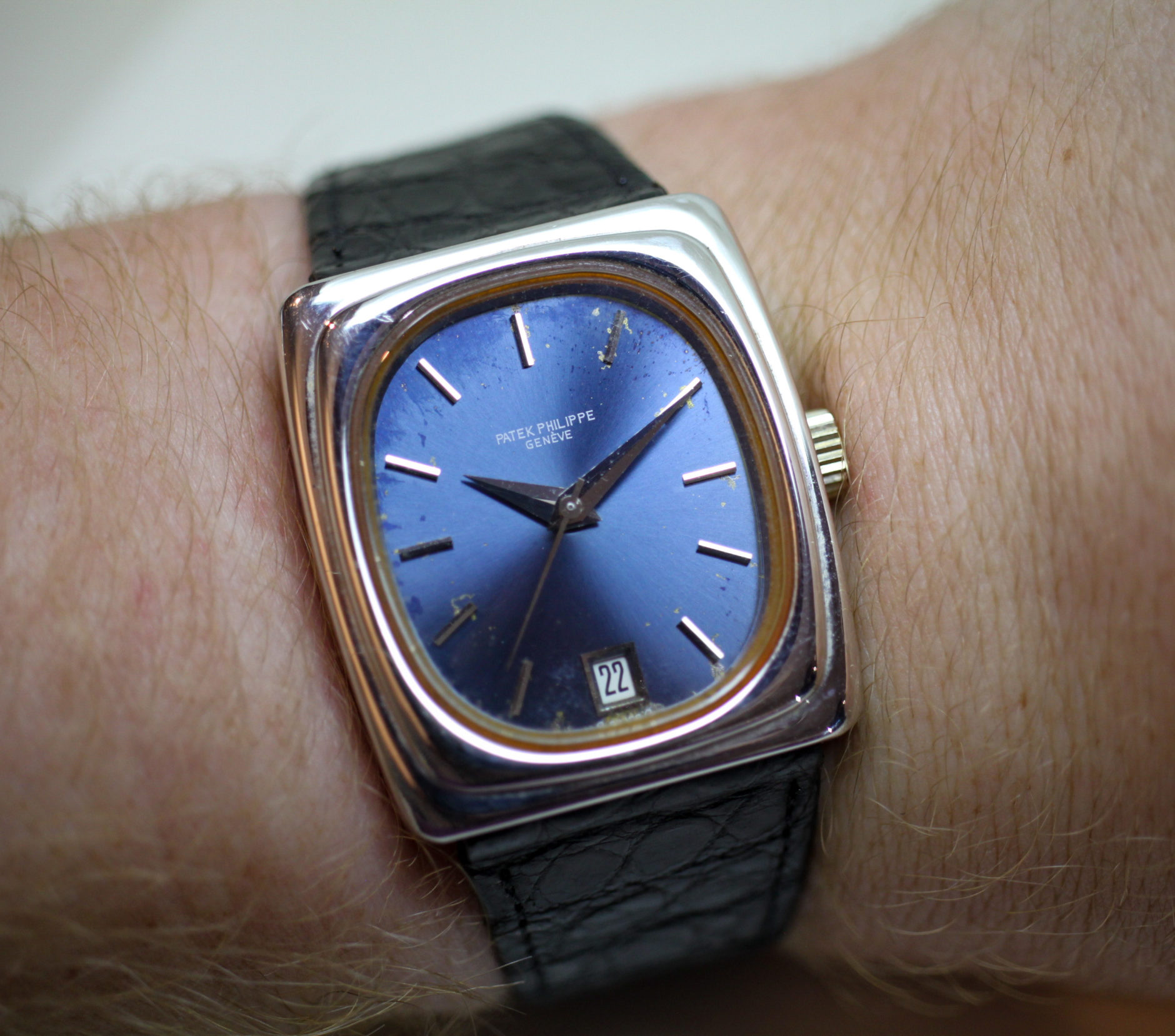 Moving into the super high-end section of the auction is the Patek Philippe Wempe 125th Anniversary Ref. 5125G (Lot #217). It was released in 2003 to commemorate 125 years of business between Patek Philippe and the legendary German retailer, Wempe. The watch is an ideal representation of collaboration between brand and retailer done right. It was produced to resemble the iconic Patek Philippe Ref. 3448/3450 with its dauphine hands, baton numerals, and smooth bezel. The “Wempe” branding can be found on the caseback and subtly printed on the moon-phase indicator in silver. Only 475 models were made in total with all examples sold at Wempe. Out of that number, only 125 models were made in white gold.  The current bid is at $48,000 and it’s estimated to settle between $50,000 and $60,000. Full listing here. 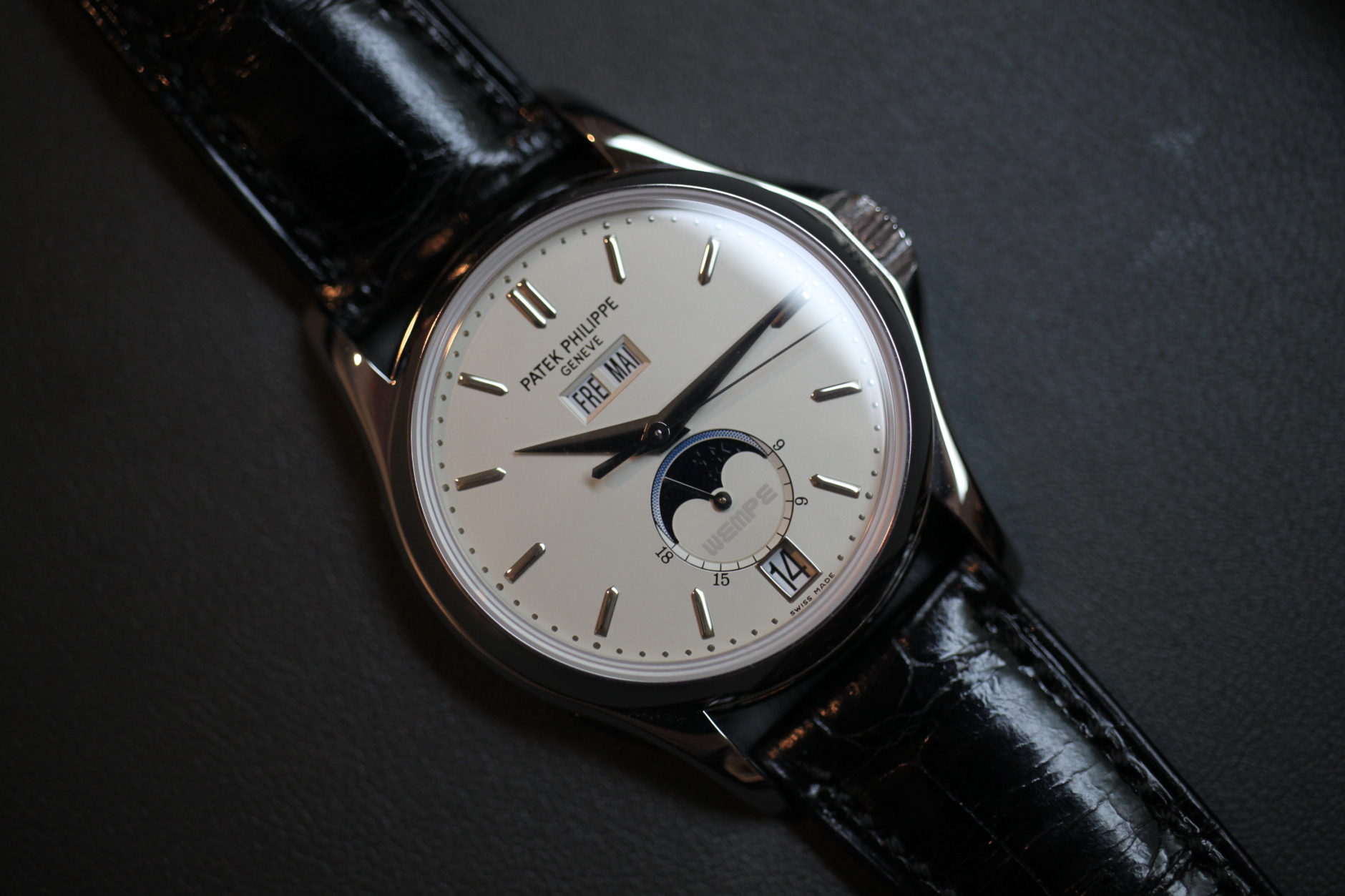 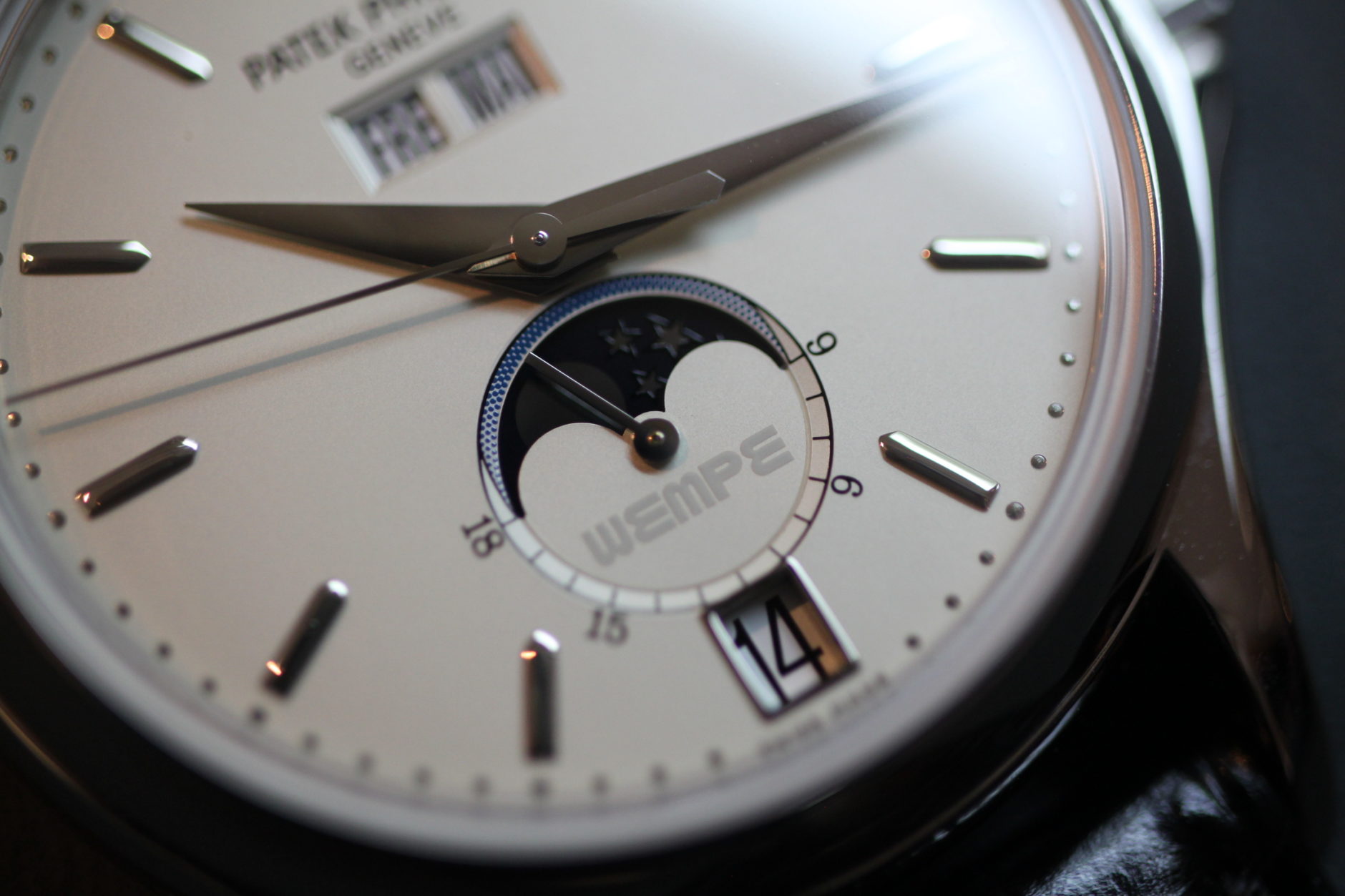 The Patek Philippe World Time “Mecca” is a curious timepiece that utilizes Louis Cottier’s original world time design but was produced with the Middle Eastern market in mind. The timezone traditionally represented by Moscow or Doha has been replaced with “Mecca” and is highlighted in a nice shade of green that is complemented by an eye-catching guilloché green center. There is a long-held belief in Islamic countries that the Quran forbids the “adornment of gold and silk,” meaning many Muslims refuse to wear gold jewelry or timepieces. Patek Philippe circumvented this by producing its Ref. 5130P in platinum rather than the more common white gold case material. There were only 150 “Mecca” Ref. 5130P’s originally produced in 2011 and the current bid for this one is at $130,000 and it’s estimated to settle between $150,000 and $200,000. Full listing here. 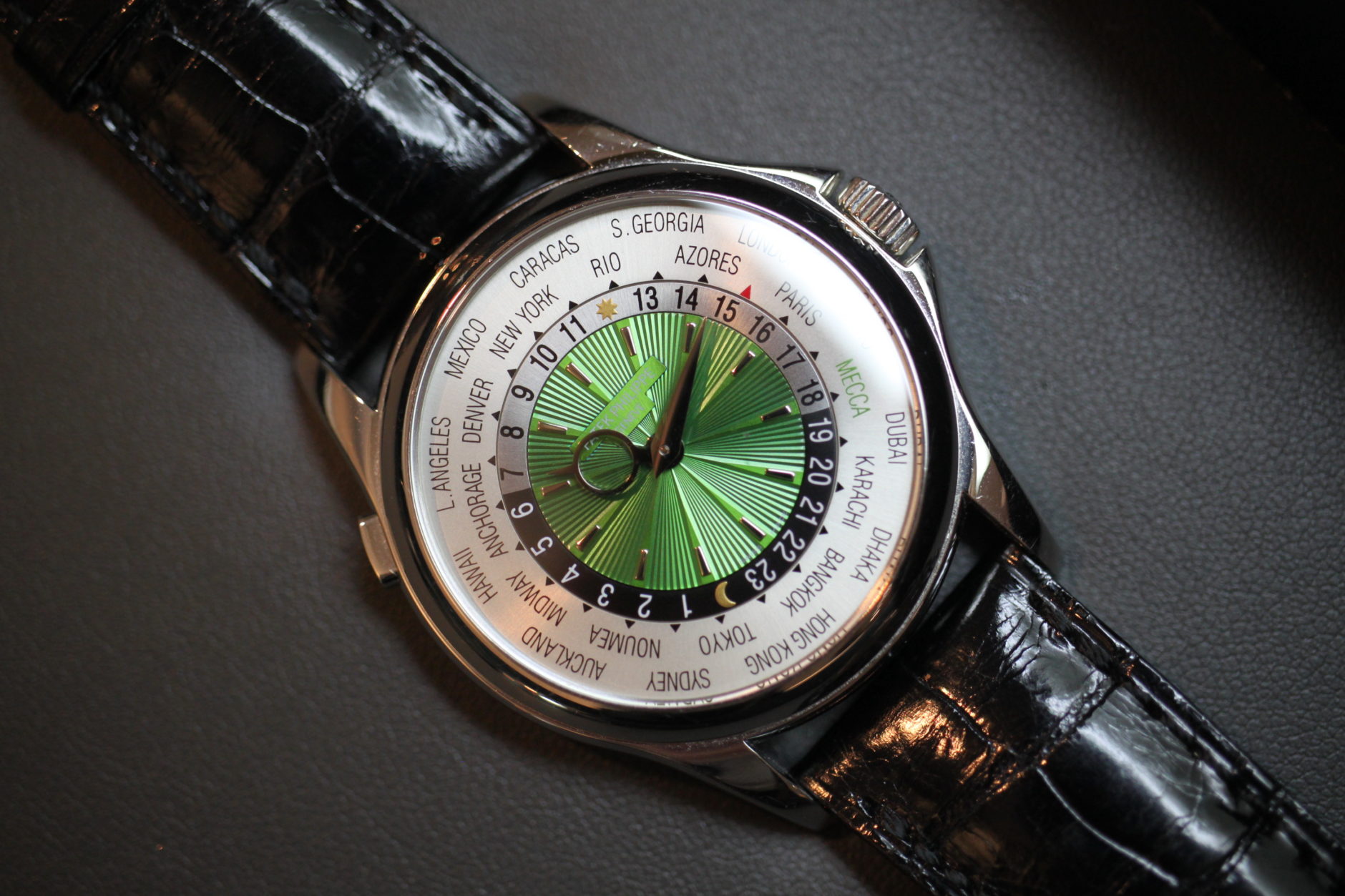 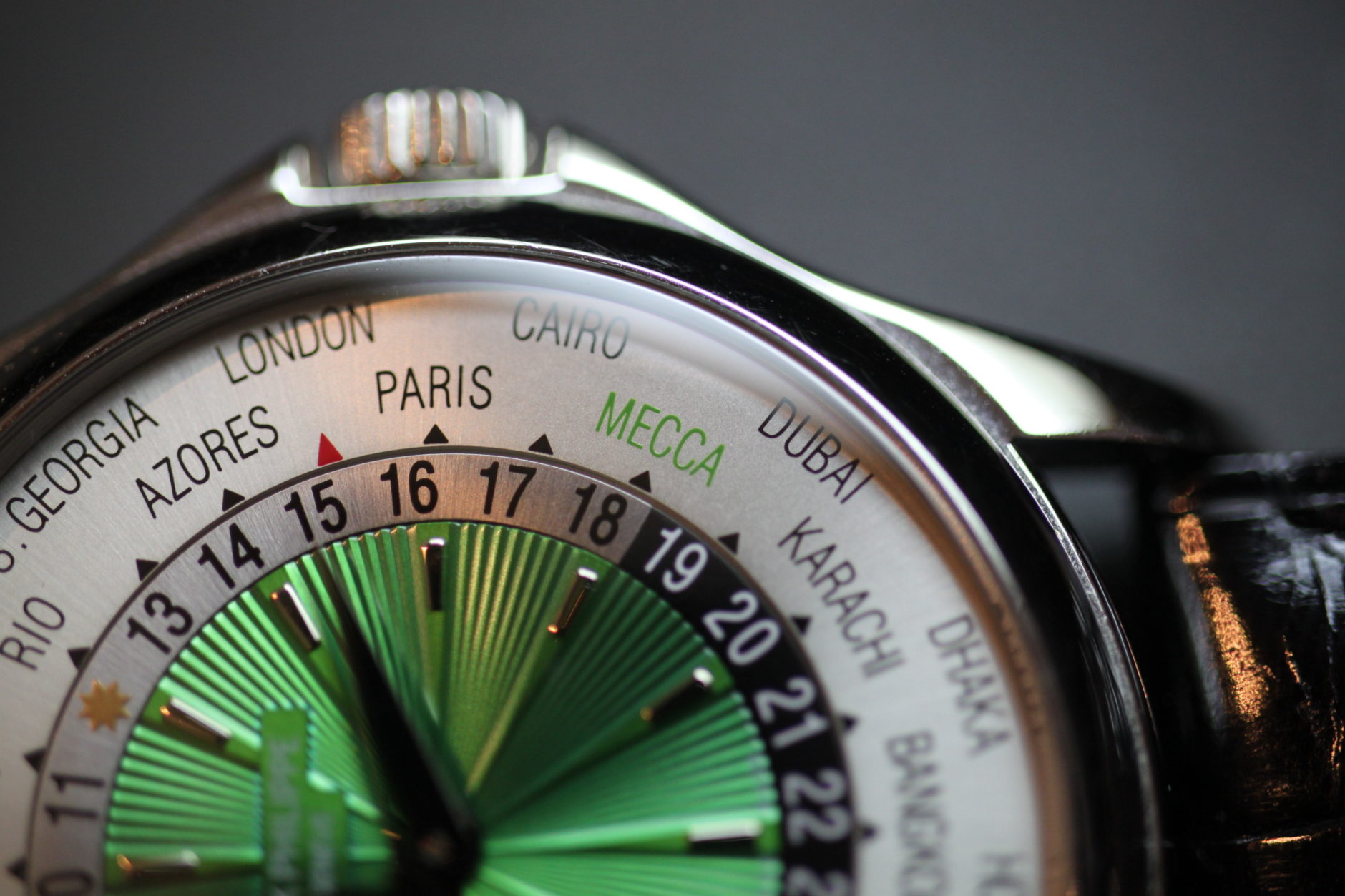 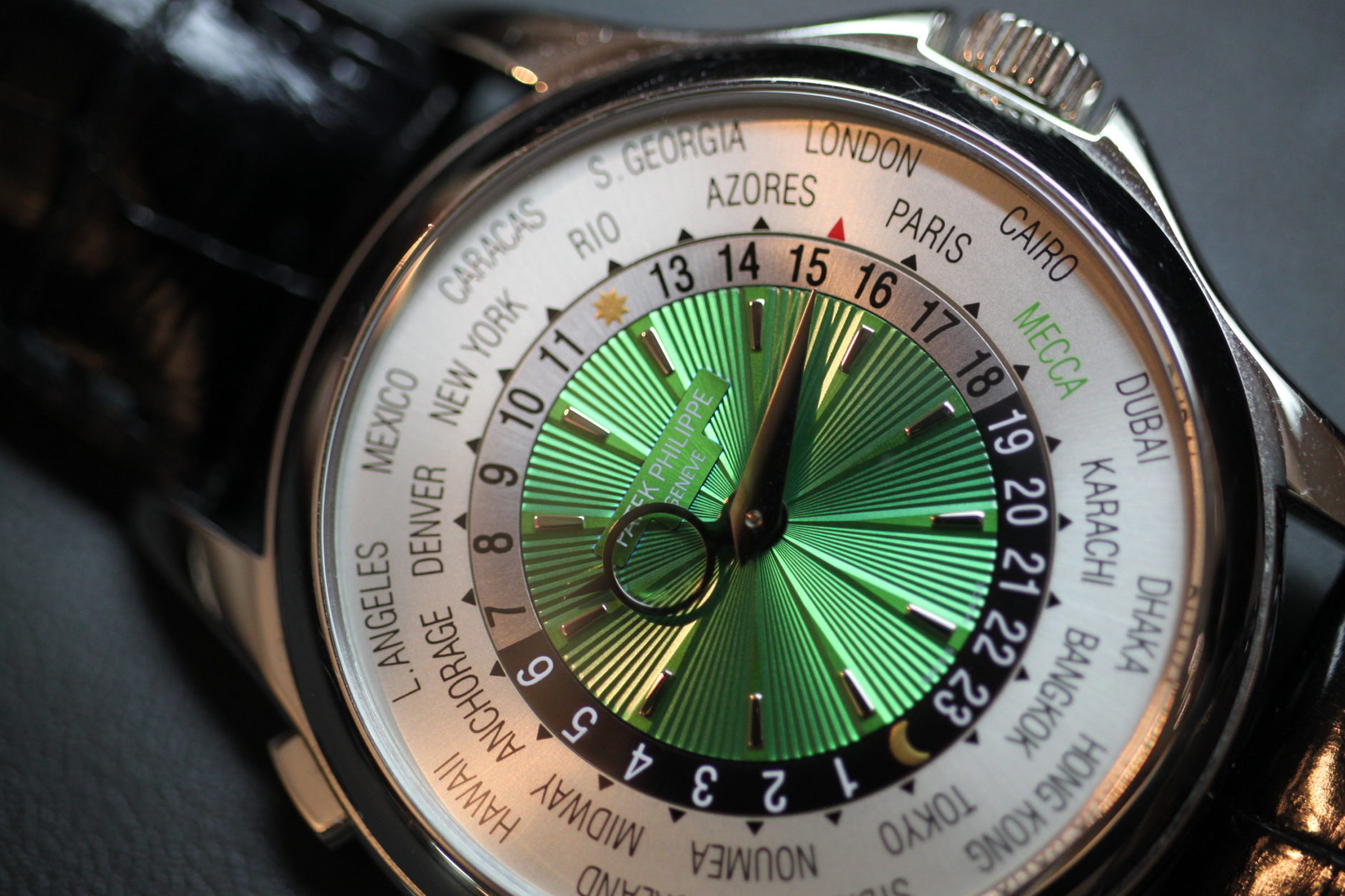 The final lot of the “Falling for Time” sale was donated by the tennis star and recent US Open men’s champion Novak Djokovic. Along with Djokovic’s personal limited edition Seiko Astron GPS Solar World Time watch, the lot comes with a signed racquet that was actually used by Djokovic to defeat Roger Federer at the 2018 Cincinnati Open. The titanium watch has a mother-of-pearl dial and a rose gold casing. The current bid is at $15,000 and it’s estimated to settle between $15,000 and $25,000. Full listing here. 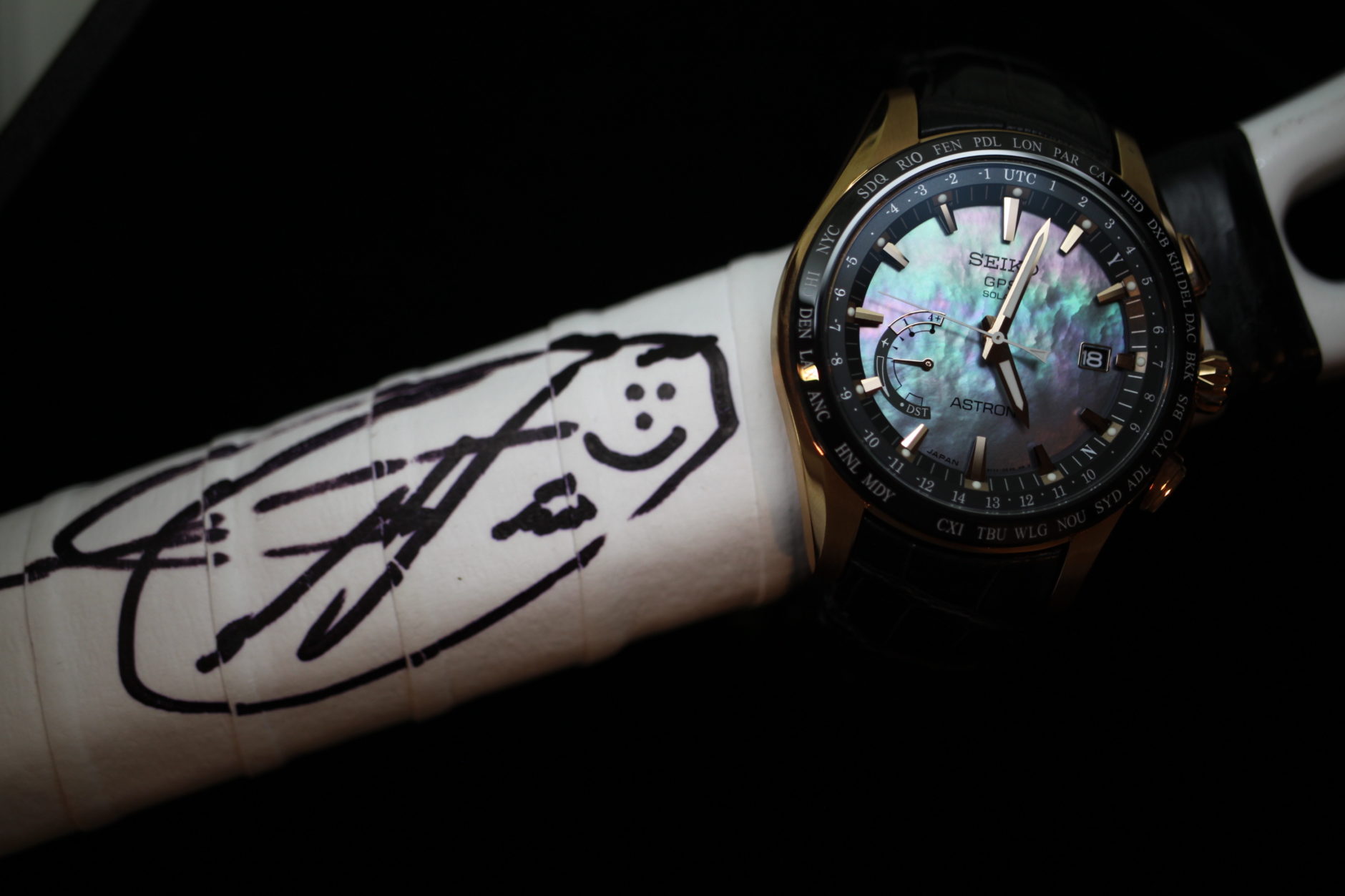 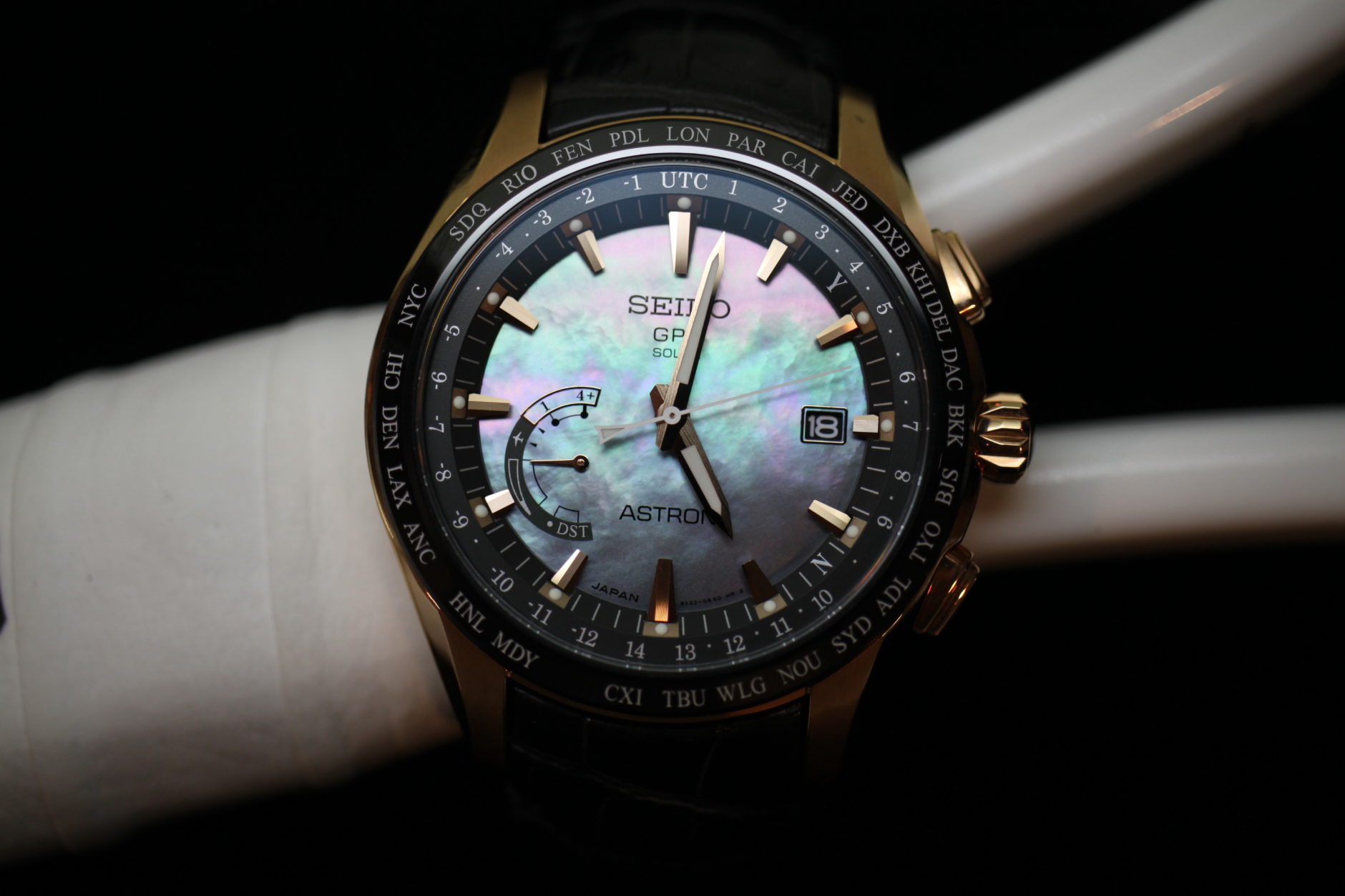