So says Michael Goulian, a champion aviator and brand ambassador for Alpina Watches, about his German-made Extra 330SC plane before he steps into the cockpit. The Extra 330SC isn’t exactly the kind of aircraft you picture when someone says they’re a professional pilot. It’s a sleek flying machine that knifes and tumbles through the sky with speeds that top out at 260 miles per hour, the capability to hit up to 12 Gs of force, and the ability to roll 380 degrees in a single second.

Goulian has been flying since before he could drive a car and has performed in over 300 air shows around the world. He’s about as legit as they come in the air show business and is known throughout the industry for his thirty years of championship experience and consummate professionalism.

His unique skill set that allows him to overcome gravity and do things like fly upside down for multiple minutes at a time before diving into a series of rolls, spins, flips, and turns is what propelled him to win the United States Unlimited Aerobatic Championship when he was only 27 and represent the United States at both the World Aerobatic Championships and the Red Bull Air Race Championships for multiple years. It’s an impossible combination of grace and raw strength that enables him to make the sky his domain.

The speciality aerobatic planes that Goulian has been flying all his life are similar to mechanical watches in a lot of ways. Both are targeted to a niche, but global, audience — the Red Bull Air Race gets tens of thousands of visitors at each of its eight races throughout the world — and are made of special components that you won’t see in more everyday objects like passenger airplanes or quartz watches. For example, the wings and spars of Goulian’s Extra 330 SC are made from carbon fiber. Where a passenger airplane is meant to rely on stability and comfort, an aerobatic plane cuts any excess material down in favor of speed and maneuverability. This is similar to a pilot’s watch where all excess complications — bare a date window — have been cut in favor of sober legibility. 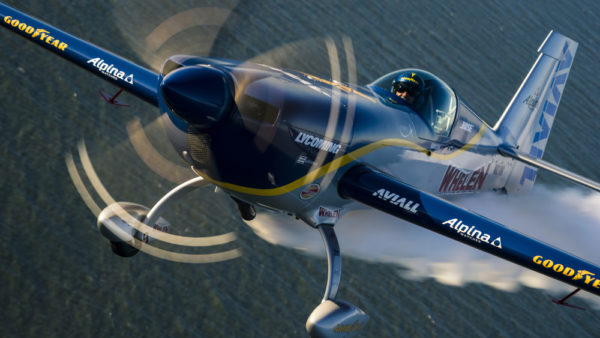 All the similarities between the two industries has led to the release of Alpina’s latest Startimer Pilot watch — the 99MG Limited Edition, designed with input from Michael Goulian himself. It’s similar to other automatic Startimers in Alpina’s vast collection, but this time around the watch combines a matte dark blue dial with a titanium-colored stainless steel case, a first for the brand. The timepiece fulfills all the traditional trappings of a pilot’s watch with large hand-applied indices filled with powerful lume, straight indices at three, six, nine, and 12 o’clock, and Alpina’s inverted flieger-esque logo in red at 12 o’clock. There is a date window (pilots need to know what day it is too, you know) at three o’clock that is thankfully unobtrusive due to the matching blue of the dial. At 44 mm, it’s a substantial watch that offers functionality over form but is still undeniably attractive on the wrist.

“I wanted the watch to be professional and understated, but still distinctly a pilot’s watch,” says Goulian. “I didn’t want it to be flashy.”

That’s a big selling point here. Too often these limited edition brand collaborations end up being decked out with far too many logos and branding and come across as insincere. Here, this is a proper collaboration between a brand with a rich heritage in flying and a man with the expertise to know what works and what doesn’t while in the air. This is the sort of watch that when you wear it, you know someone else has one of its 188 siblings on and is wearing it over the sleeve of their bomber while 4,000 feet in the air. And, even if you don’t plan on ever flying a plane with this watch on, isn’t it comforting to know that you can?

No Responses to “Do a Barrel Roll: Introducing the Alpina 99MG Pilot’s Watch”