Patek Philippe has a well-deserved reputation for being rather conservative in its watch designs and rarely giving in to transient trends. Thus, even a subtle change to one of its classic models garners attention among watch cognoscenti. At this year’s Baselworld, the brand introduced the new Ref. 5227, a Calatrava in a slightly larger case and a new, hinged dustcover over the exhibition caseback.

The first Calatrava, Reference 96, was launched in 1932, the same year that Patek Philippe was acquired by its longtime owners, the Stern family, and has been a mainstay of the brand’s portfolio ever since. And while most watch aficionados know that Patek Philippe is a full-fledged manufacture that makes its own movements, many may not realize that for decades now it has also made its own cases, from sketches to final, polished product. Thus it is with pride that the company touts the new “officer’s style” case of the Ref. 5227, which is slightly larger than those of previous models — 39 mm in diameter, still modestly sized compared to many of today’s timekeeping behemoths —and includes for the first time a dust cover whose hinge is built entirely on the inside and thus invisible while the cover is closed.

The well-known Calatrava case still has its hallmark concave bezel, flowing lugs and thin profile (just 9.24 mm thick); the tiny lip along the side that allows the wearer to open the dust cover is barely discernible. The dust cover, on whose inside surface a personalized message can be engraved, has a precision-fit hinge and has been manually adjusted to ensure it closes with a smooth, nearly seamless click. Patek also added another new feature to the case: elegantly curved flutes that have been sculpted from the case flanks to the lugs, and which have been hand-polished to a mirror sheen. (Watch photos can be enlarged with a click.)

The bezel’s concave perimeter frames the famously clean and uncluttered Calatrava dial, here with a cream-colored lacquer surface, trapezoidal hour markers made of gold, a minute circle composed of golden dots,  and a polished gold frame around the date aperture at 3 o’clock. Pointed and faceted Dauphine-style hour and minute hands indicate time, along with a slender, counterbalanced seconds hand. The crystal over the dial is slightly curved and made of sapphire.

Opening the dust-cover reveals the other sapphire window in the back, which offers a view of Patek Philippe’s manufacture Caliber 324 SC, a self-winding movement with a frequency of 28,800 vph and a 48-hour power reserve. Patek Philippe says that the rate accuracy is within the narrow range of -3 to +2 seconds per day, as required to earn the brand’s in-house Patek Philippe Seal. The movement has a four-arm Gyromax balance; a Spiromax balance spring made of Silinvar, a silicon derivative patented by Patek; and a solid 21k gold winding rotor engraved with Patek’s Calatrava cross emblem. Like all Patek Philippe movements, Caliber 324 SC displays meticulous hand-finishing, including chamfered and polished bridges, Geneva striping, gold-filled engravings and circular graining.

Ref. 5227 is available in a case of yellow, white or rose gold, each with a matching gold prong buckle. Each comes on a hand-stitched alligator leather strap, in shiny black for the white-gold model and shiny dark brown for the rose-gold (both $37,300); and shiny chocolate brown for the yellow-gold edition ($35,400).

No Responses to “A New Case for an Old Classic: Patek Philippe’s New Calatravas”

END_OF_DOCUMENT_TOKEN_TO_BE_REPLACED 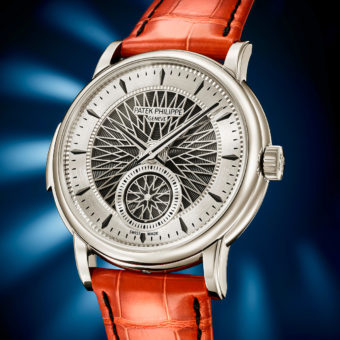 Patek Philippe Chimes in the Holidays with ...