With the opening of Baselworld, the world’s biggest watch fair, less than a month away, more watch brands are offering up appetizers to the smorgasbord of new product introductions in March. The latest is Blancpain, with a preview of the revamped version of its Villeret Quantième Complet GMT watch.

A “complete calendar” (“quantième complet” in French, the language of Le Brassus, Blancpain’s home in the Swiss Vallée de Joux) is defined as a watch that displays the day, date, month in addition to the time, with a moon-phase display as an optional addition. Blancpain’s distinctive take on this style of timepiece, which it first debuted in the 1980s, has become a cornerstone of the maison’s luxurious Villeret collection: day of the week and month in adjacent windows, date indicated by a blued serpentine hand on a numbered scale on the dial’s rim, and a charming moon-phase display at 6 o’clock. Unlike an annual calendar or perpetual calendar, the simpler “complete” calendar requires more frequent attention to keep it accurate: the wearer must still manually advance the date in months of less than 31 days. However, this watch’s addition of a GMT function — with a red-tipped pointer hand indicating a second time zone on a 1-t0-24 scale — takes the watch’s complexity up a notch. Rounding out the dial’s elegant layout are the openworked, leaf-shaped hour and minute hands and applied Roman numerals.

So what’s new about this version of the Quantième Complet GMT? In short, it incorporates a handful of advancements that Blancpain has developed since the original’s debut. One of these is in the movement, the self-winding Caliber 67A5, which is now equipped with a balance spring made of antimagnetic silicon for greater timekeeping precision. Visible through a sapphire caseback, this 286-part movement has 28 jewels and offers a 72-hour power reserve.

The other major change — albeit a subtle one aesthetically — is in the functionality of the calendar setting operations. The case features Blancpain’s patented under-lug correction buttons that enable the wearer to quickly change the calendar and moon-phase indications with his fingertip. Hidden under the case flanks, these correctors replace the more traditional (and somewhat unwieldy) tools that are often required to adjust the settings on calendar watches, and add to the very streamlined look of the round case, which measures 40 mm in diameter and 11.8 mm in thickness, and is water-resistant to 30 meters.

The Villeret Quatieme Complet GMT will be offered in two versions, one in rose gold with an opaline dial and applied rose-gold indices, the other in stainless steel with a white dial and white-gold applied indices. Both are available with either an alligator strap or a Milanese-style metal bracelet. Prices will be announced at Baselworld 2018.

No Responses to “Blancpain Updates the Villeret Quantième Complet GMT”

END_OF_DOCUMENT_TOKEN_TO_BE_REPLACED 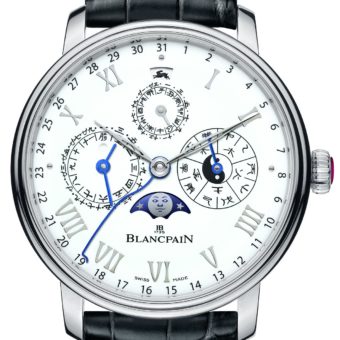