The Freak Phantom (an earlier version of this watch was introduced as the Freak Diavalo, but UN reps revealed to us that the “Devilish” moniker was a problem in some Spanish-speaking markets) uses even more silicon parts in the movement than previous Freaks – including for the hairspring and throughout the majority of the escapement. The movement of the Freak Phantom — Caliber UN-208 — is produced entirely in-house, including the oscillator. It is outfitted with an eight-day “flying” carrousel tourbillon, which makes a complete revolution around the center once every hour to indicate hours and minutes. The tourbillon cage, which rotates in on itself once per minute, has an arrow that indicates the passing of the seconds on a transparent half-circle. The “zero” position stays steady on the axis of the minute indicator.

Both the “flying” motion of the minutes-indication movement and the seconds-indication via the tourbillon cage are enabled by a cutting-edge ball-bearing system that dispenses with the need for a supporting bridge. Like previous versions of the Ulysse Nardin Freak, the Freak Phantom’s movement is wound by turning the bezel on the back of the case (one full rotation is equivalent to 12 hours of power reserve), and the time is adjusted by turning the front bezel. Because of a direct gear link between the three “hands,” the user needn’t worry about throwing the hour, minute or second out of step when adjusting or readjusting the time. The movement offers a very lengthy power reserve of eight days. The Ulysse Nardin Freak Phantom is a limited edition of 99 pieces. Its 45-mm diameter case is in 18k rose gold, which contrasts boldly with the black tones of the dial-side movement. The watch retails for $137,000.

This article was originally published on August 22, 2013, and has been updated.

END_OF_DOCUMENT_TOKEN_TO_BE_REPLACED 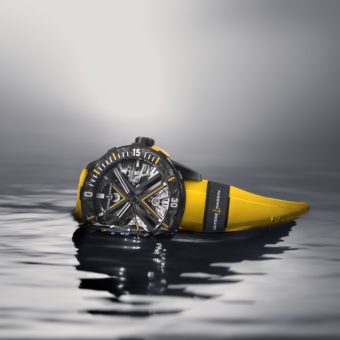