In our latest visit to the global WatchTime archives, a look at how watchmaking has countered the threat of magnetism over the years, from using metals like palladium in 1915 to silicon in 2015.

Magnetism has been the mechanical timekeeping’s nemesis through the years. It is to the mechanical watch what Prof. Moriarty is to Sherlock Holmes.  Though the watch industry has responded to this threat with many innovations through the years, we’ve always been asked this question by readers and budding watch enthusiasts: just how real is the threat of magnetic fields in our daily lives?

Before we set out to answer that questions, let’s examine what happens to a mechanical watch when it is exposed to a magnetic field. The simple truth is that certain parts of the escapement like the balance wheel and hairspring, become magnetized upon such exposure. For example, the concentric circles of the hairspring may bunch together, thus leading to friction. This could ultimately affect the escapement’s amplitude and accuracy. In most cases, once the magnetic field is removed, the watch might start running as normal again but in the case of a particularly strong magnetic field, it may stop working altogether.

In 1915, Vacheron Constantin created an anti-magnetic pocketwatch and in 1930, Tissot produced its first amagnetic watches. In both cases, palladium was used in the construction of the escapement.

During World II, the German Air Force (Luftwaffe) was supplied with Pilots’ watches that had movements encased in a soft iron case, known as a Faraday cage, to withstand the effects of magnetism at high altitudes. Longines supplied the Czech Air Force in the Thirties with watches that had ‘antimagnetique’ markings on the dial.

In 1949, Jaeger-LeCoultre and IWC produced the Mk11 pilots watch for Britain’s RAF pilots. These watches were made to the strictest conditions set by the Ministry of Defence and required that the movement be enclosed in a soft iron case. IWC famously produced the Mk11 from 1949 to the early Eighties.

The Fifties was the “tool watch era,” in which a clutch of watches celebrated man’s spirit of adventure and exploration. These included Universal Genève’s Polerouter (initially called the Polarouter) made for the pilots and crew of SAS (Scandinavian Air Services) Airlines flights, who flew over the North Pole in an attempt to reduce flying times between Europe and New America.

These watches, which had to withstand the strong magnetic fields present around the North pole, were initially issued only to SAS crew and were designed by a young Gérald Genta, who would go on to design classics like the Audemars Piguet Royal Oak and Patek Philippe Nautilus. 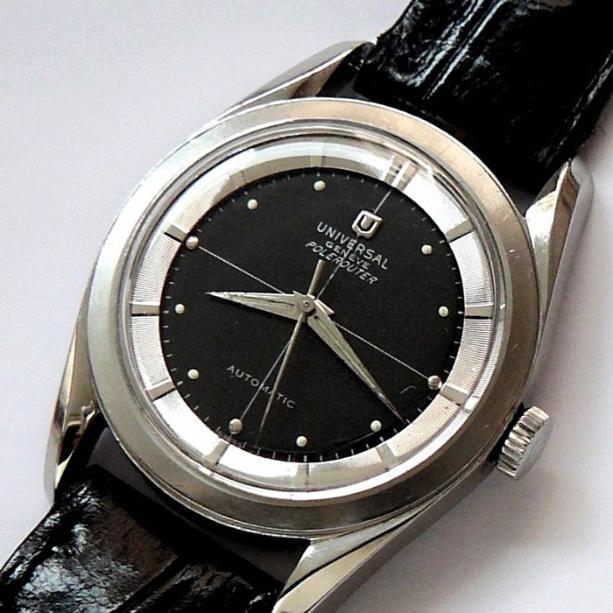 In 1955, IWC launched the Ingenieur (Ref: 666A), the brand’s first automatic, anti-magnetic watch. The handiwork of IWC’s technical director Albert Pellaton, the watch was supposed to be the civilian, automatic version of the famous Mk11.

It was also famous for featuring the first bidirectional rotor in an automatic movement. Early advertisements of the Ingenier (“Engineer” in French) claimed that the watch could withstand a magnetism up to 1,000 Oersted (1,000 Gauss). This was at a time when most mechanical watches could withstand magnetic fields up to 100 Gauss only.

ISO 764 standard states that, to be considered antimagnetic, a watch must resist a magnetic field of 4,800 A/m (60 Gauss) and its accuracy must stay within +/- 30 seconds per day.

In 1956 Rolex introduced the Milgauss (Ref: 6541), a watch capable of withstanding a magnetix flux density of 1,000 Gauss and was supplied to scientists at CERN and technicians at power plants. The Milgauss would go on to become the most famous anti-magnetic watch of our times.

Omega launched the Railmaster (ref CK2914), capable of withstanding magnetic fields, and produced these watches until 1963 before they were discontinued. Omega did revive the Railmaster a few years ago, but it’s the early models that are collectible now.

In 1958, Jaeger-LeCoultre introduced the Geophysic chronometer to commemorate the International Geophysical Year. The Geophysic was created for engineers and scientists and was capable of withstanding the magnetic fields of the North Pole. (More details here.)

Patek Philippe came to the tool watch party in 1958 as well, with its first anti-magnetic wristwatch, the Amagnetic (Ref. 3417 in stainless steel). It was produced for two years and featured a soft-iron cage and, in some cases, beryllium components to additionally thwart magnetics.

Most modern watches use non-ferrous metals in the escapement, so unless they are subject to very high magnetic fields, they should be able to withstand with any magnetic fields they encounter on a regular day.

Ulysee Nardin made a significant leap in 2001 when it launched the Freak, the first production wristwatch to use a silicon escape wheel, it was the first time silicon parts were used in a wristwatch. Designed by Ludwig Oechslin, the Freak heralded the use of silicon in watch movements.

This Breguet watch uses magnetic pivots in its movement. With the introduction of silicon in the moving parts of a watch’s movement, the battle against magnetism received a big boost, and in 2013, Omega took the next step, introducing the Master Co-Axial movement (Calibre 8508) that was capable of withstanding up to 15,000 Gauss. That’s a long way from when watches withstood a 1,000 Gauss in the late Fifties.

The use of silicon and anti-magnetic materials in the movement ensured that the movement did not need a soft-iron cage, so the watches could benefit from having see-through sapphire crystal casebacks. Omega hopes to roll out this technology across all its movements by 2020.

In 2017, Zenith unveiled the Defy Lab, which used a new oscillator to replace the traditional sprung balance first used in 1657 by Christiaan Huygens. The result is an incredibly precise (to within 0.3 seconds) mechanical timepiece. The movement is impervious to temperature gradients, gravity and magnetic fields — all bugbears in the current balance-and-spring assemblies that are subject to deformation and/or dilatation, thereby leading to diminished precision.

A version of this article first appeared on WatchTime Middle East.