Parmigiani, the Swiss watch brand founded by watchmaker Michel Parmigiani, introduced two new collectors’ timepieces to its Bugatti collection, made in collaboration with the prestigious automobile maker, at the Pebble Beach Concours d’Elegance. The timepieces — a rose-gold version of the Bugatti Super Sport and a new titanium Bugatti Vitesse — made their debut alongside a restored classic automobile, the 1935 Bugatti T57S Electron Torpedo.

The event in Pebble Beach, regarded as the most prestigious of the festivals of classic automobiles held in the U.S., provided the ideal setting for Parmigiani to launch its newest Bugatti watches. The watch company, which was established in 1996 and is today part of Switzerland’s Sandoz Family Foundation, began its partnership with Bugatti in 2004, releasing such collectible timepieces as the Bugatti Type 370 and the Bugatti Super Sport, which debuted in a white-gold case in 2010. This year, Parmigiani releases a new Super Sport in a rose-gold case, with the same innovative design based on the supple curves of its namesake high-performance automobile. It’s  time display and time-setting system are positioned at a 90-degree angle, making the Super Sport an ideal “drivers’ watch” on which the wearer can check the time while his hands are still firmly on the wheel. The time-setting system is also influenced by automotive design, integrating a system of double pinions with bevel gearing. (For a detailed report on the Bugatti Super Sport watch and how it works, click here.)

The other watch that made its debut at Pebble Beach is the Bugatti Vitesse, which takes its name and inspiration from Bugatti’s new Veyron Grand Sport Vitesse convertible, introduced at the 2012 Geneva Auto Show. It retains all the recognizable aspects of Parmigiani’s previous Bugatti watches but adds a lightweight titanium case to the mix for the first time.

The car that made its big splash alongside the new watches is a Bugatti T57S Electron Torpedo from 1935, a prototype two-seat roadster that had been previously displayed only once, at the 1935 Paris Auto Salon, and was missing its magnesium body panels when it was discovered at the Bugatti factory in the 1960s. The car has since been fully restored, with a new magnesium body, by car enthusiast and architect/designer Jim Hull.

END_OF_DOCUMENT_TOKEN_TO_BE_REPLACED 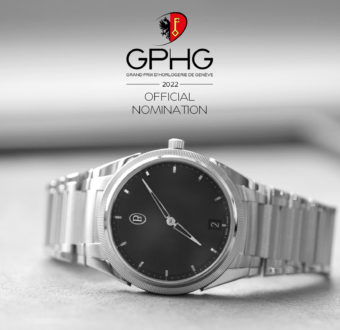