Last Saturday, a three-year-old colt named Justify, ridden by jockey Mike Smith, charged through the finish line of a historically sloppy track to become the winner of the 144th Kentucky Derby. The thrilling win, the fifth Derby victory for Justify’s trainer, Bob Baffert, was the culmination of an eventful and interesting weekend  — the third I’ve had the privilege to attend as a media guest — hosted by the race’s official timekeeper, Longines. Here are some highlights, along with details on all the Official Watches of the Kentucky Derby and the actual models awarded to the winners.

The day of the Kentucky Oaks race, held on the Friday before the Derby, is all about the ladies. The race itself, first run in 1875 when Churchill Downs was still known as the Louisville Jockey Club, is a stakes race for three-year-old fillies, with a pink carpet for celebrity entrances and a pink color scheme dominating the day’s fashions for both men and women. (The Kentucky Oaks is, in fact, typically the third highest attended thoroughbred race in the country, ahead of the Belmont Stakes and behind only the Derby and the Preakness Stakes.) Longines has been the Title Sponsor of the Oaks race since 2013 and also hosts a fashion show on the pink carpet during the afternoon, with more than 100 participants — mostly ladies but also some gentlemen, a few of them in wildly memorable attire — strutting their stylish stuff for the chance to win the coveted Longines Prize of Elegance, and more importantly, their very own model of the Official Watch of the Kentucky Oaks, which this year hails from Longines’ elegant Master Collection. This year’s celebrity judges included Longines U.S. brand president Pascal Savoy and current Miss America Cara Mund. 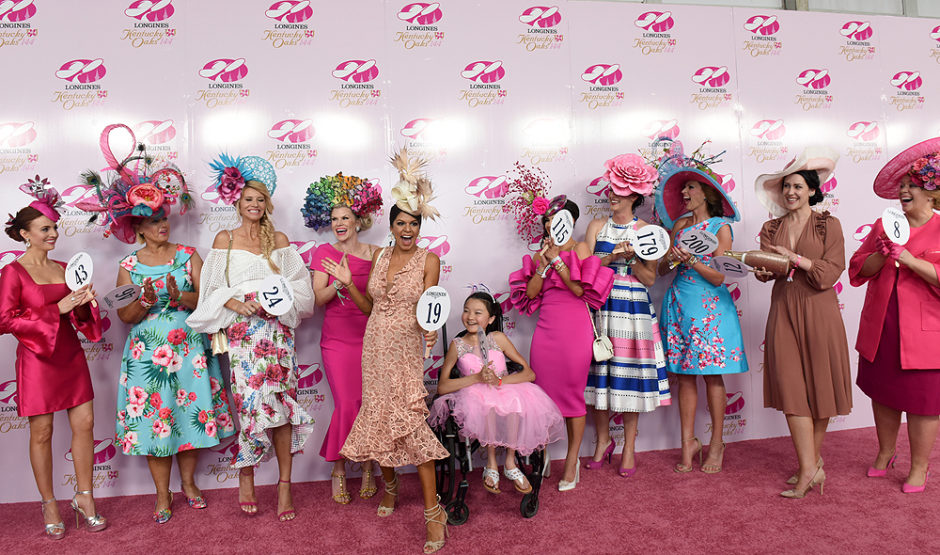 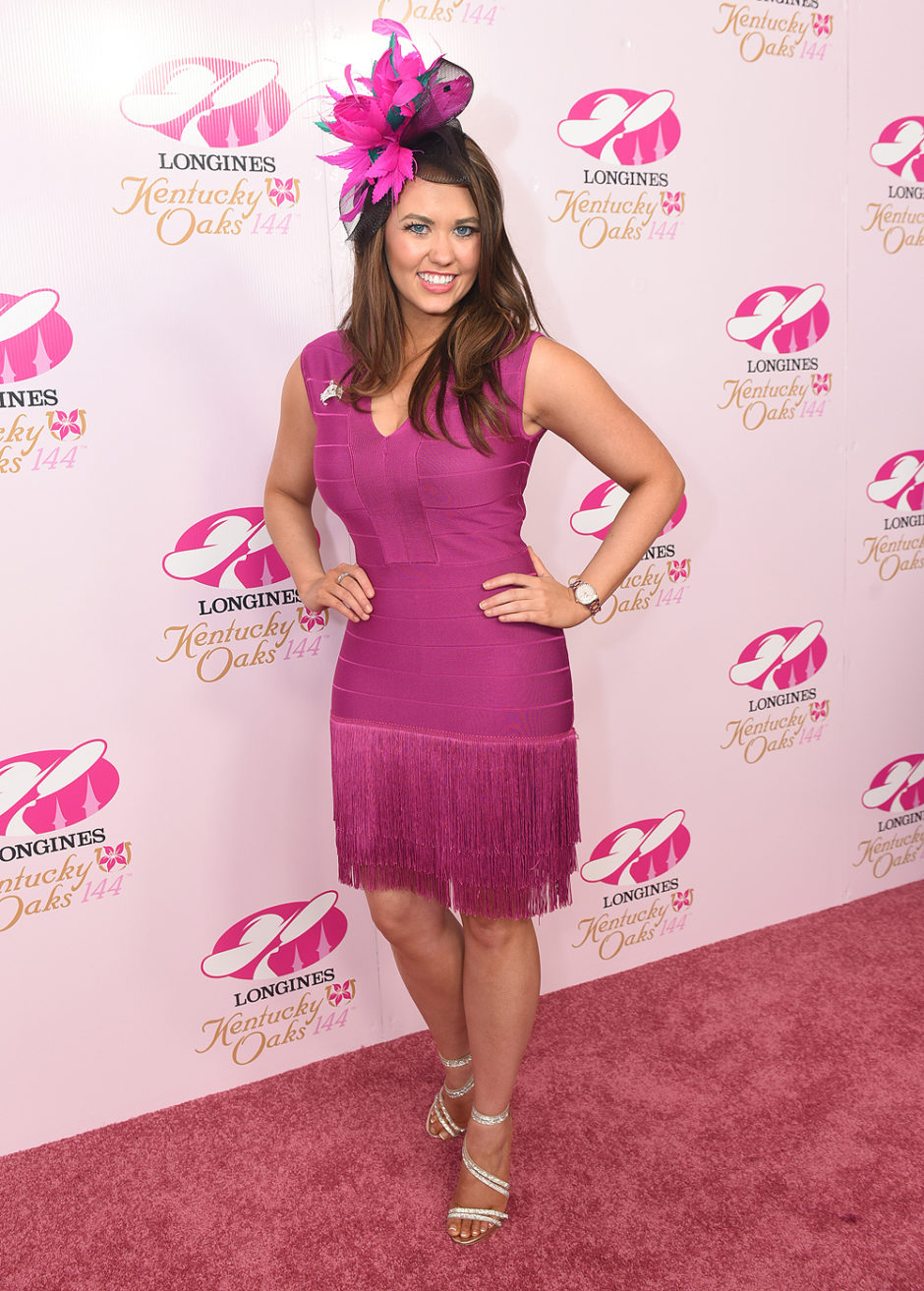 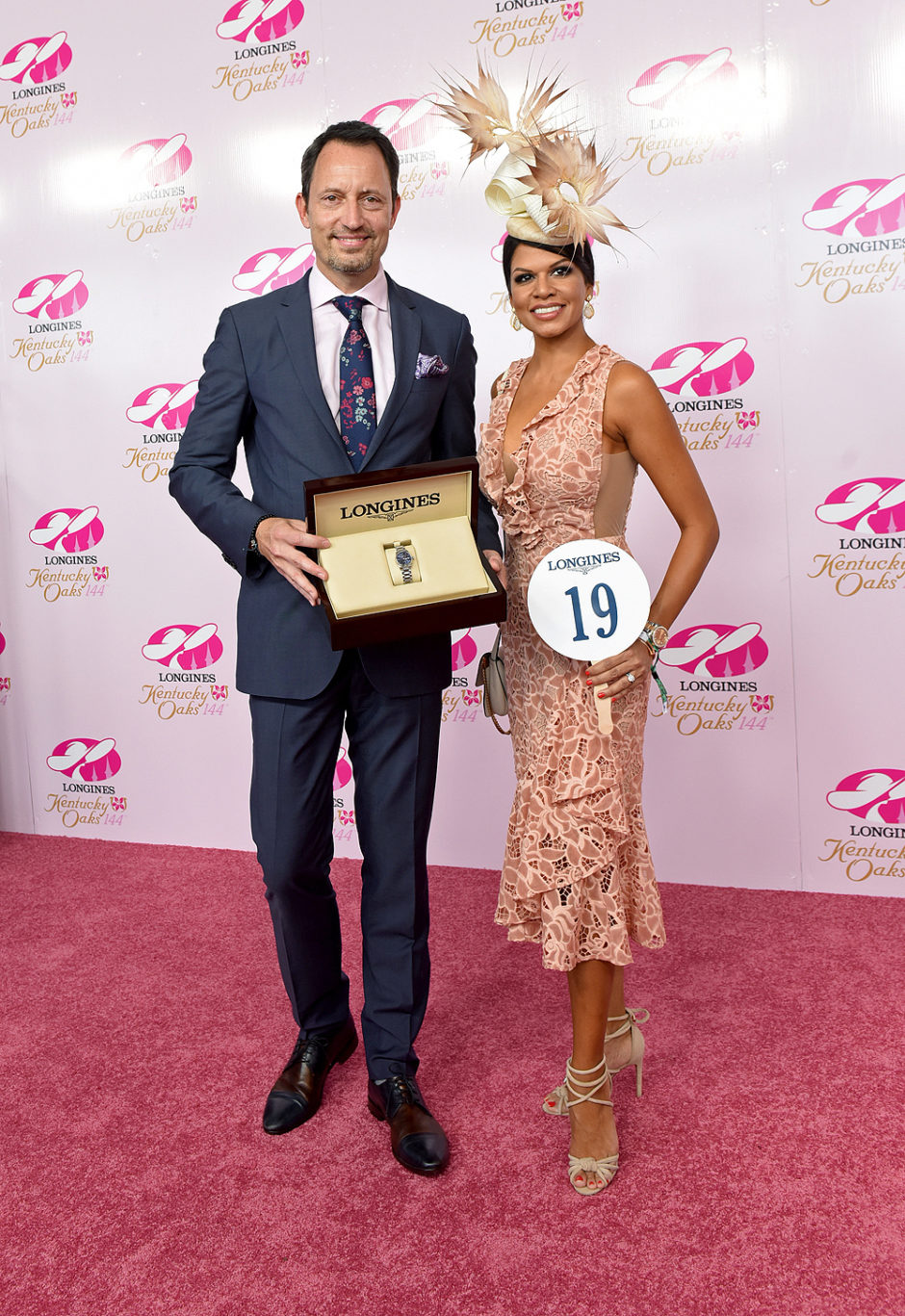 This year’s official Kentucky Oaks timepiece is the recently released blue-dialed model from Longines’s elegantly appointed Master Collection, which is available in several sizes and color combinations; the gray and blue dials debuted earlier this year. The clean, sunray-pattern dial hosts a simple three-hand time display, 3 o’clock date window, and rhodium-plated hands, along with (on this 25-mm diameter steel model) diamond indices at the hour markers. The watch is powered by a self-winding ETA movement.

The 144th running of the Kentucky Oaks (yes, the race is as old as the Derby) concluded with jockey Florent Geroux claiming victory on chestnut filly Monomoy Girl, the opening-line favorite, narrowly edging out Wonder Gadot (fans of the DC Comics movie Wonder Woman should be able to figure out the inspiration for the name) at number two and the overall points leader, Midnight Bisou, at number three. The owners, trainer, and jockey not only received the famed silver trophy but also specially presented watches from the Longines Conquest Classic collection, more on which below. 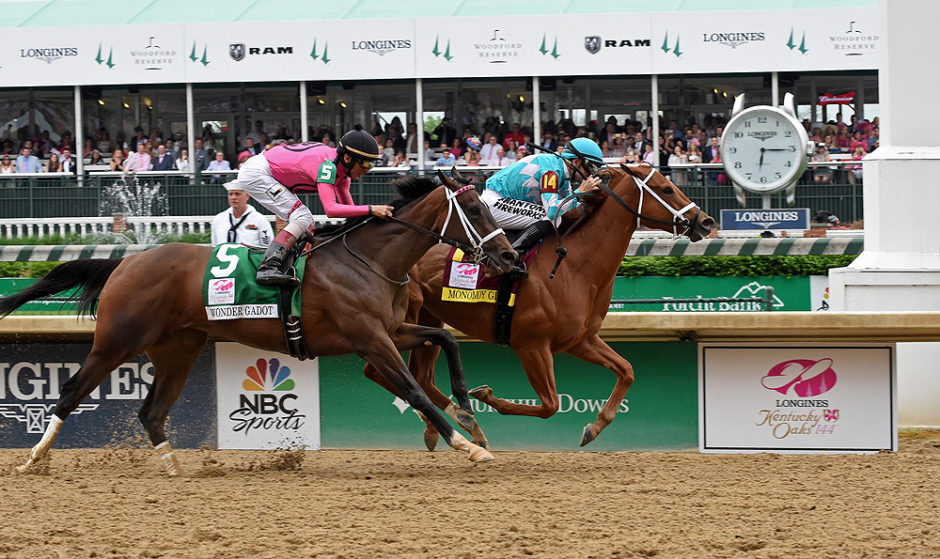 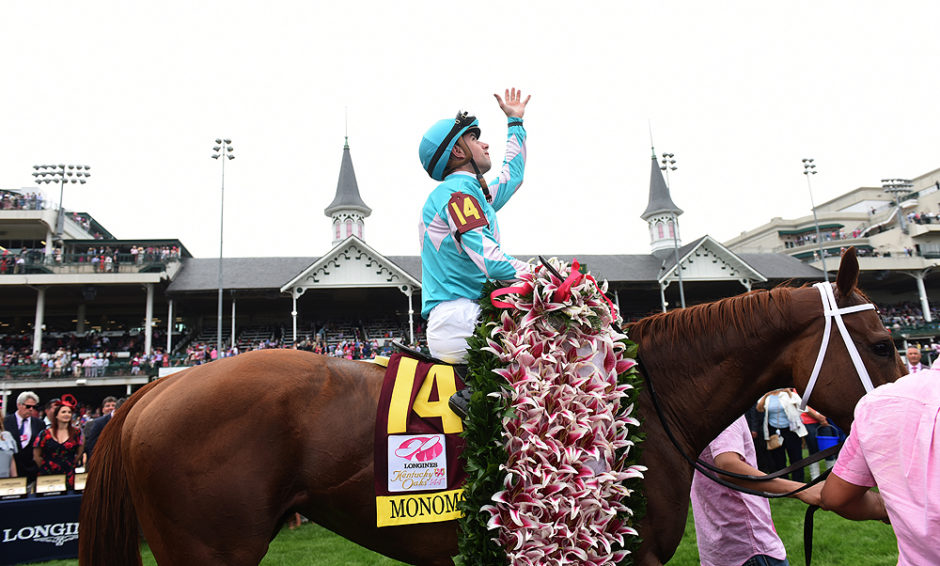 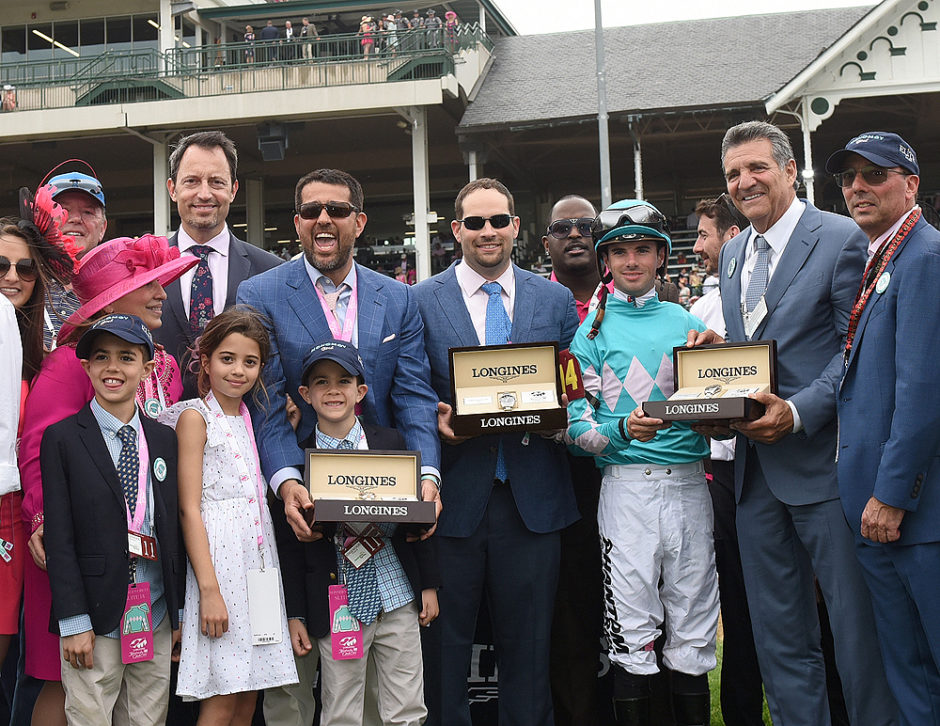 Post time for the main event — the 144th Kentucky Derby Race, aka the Run for the Roses and The Most Exciting Two Minutes in Sports — took place at 6:34 PM on Saturday, May 5, after hours of soaking rain had rendered the track a muddy wasteland; the race was, statisticians revealed afterward, the wettest Kentucky Derby Day on record, with nearly 2 1/2 inches of rainfall. Longtime horse racing enthusiasts I mingled with at Churchill Downs warned me to expect the unexpected in such conditions. Nevertheless, Justify, who was favored at 3-1 as Derby Day began, not only handily defeated the rest of the 20-horse field, winning by 2 1/2 lengths while fending off a challenge by Good Magic; he also beat the 136-year-old “Apollo Curse,” a stretch during which no horse that had not raced at the age of 2 had won the gold Derby trophy and the garland of roses. (The last to do so, was of course, Apollo in 1882.) 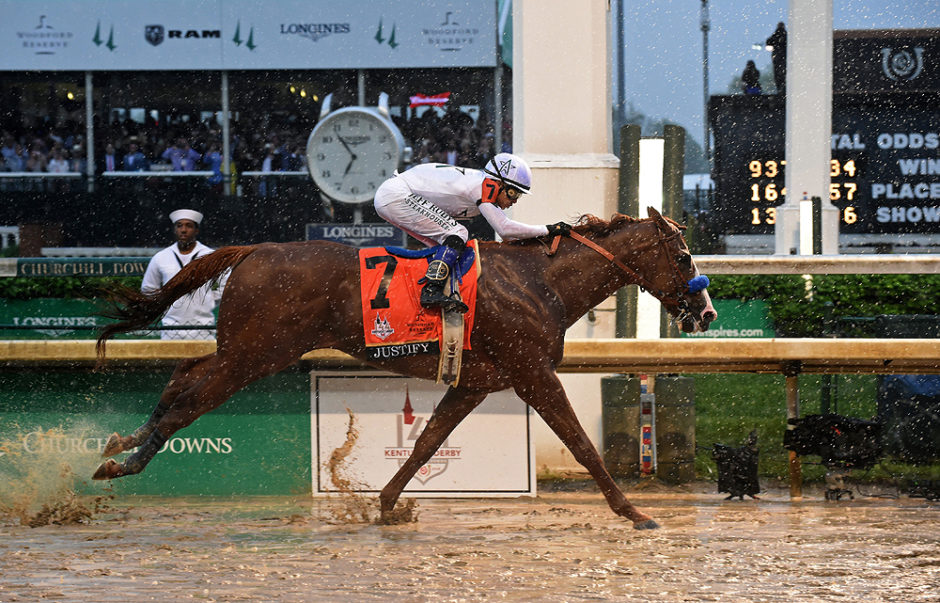 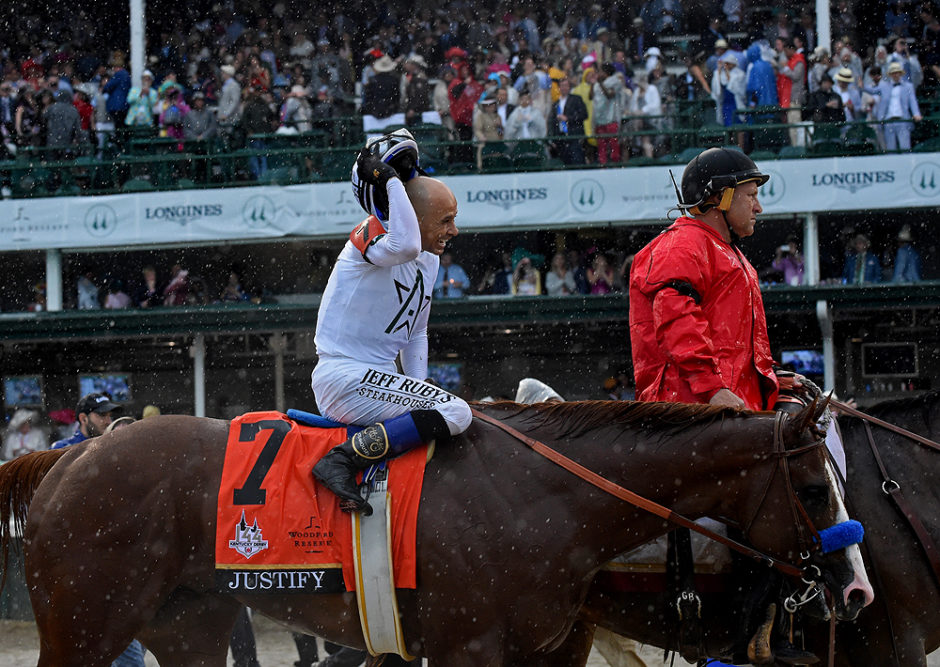 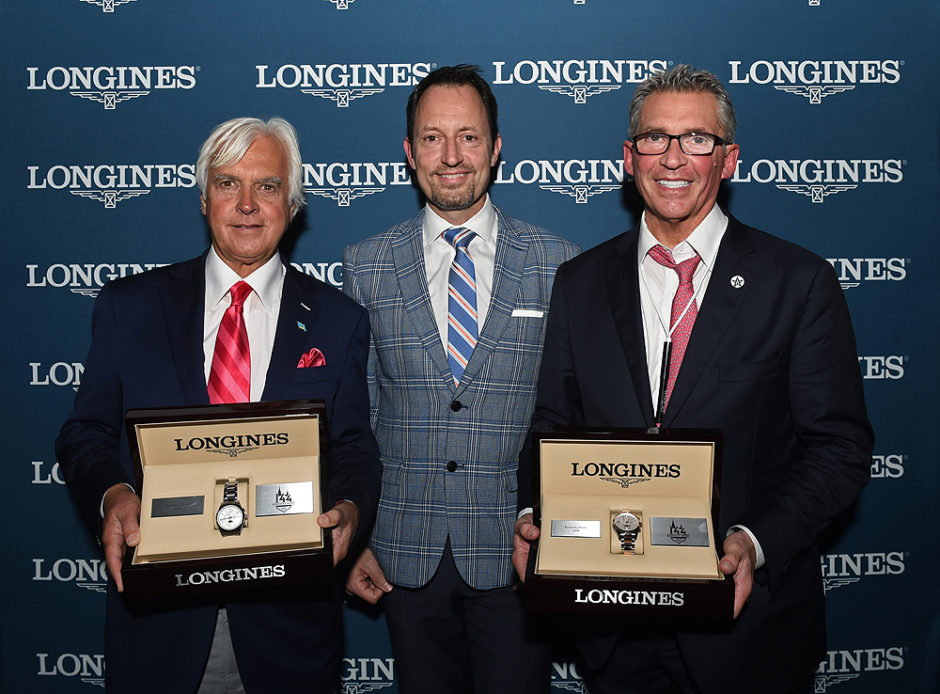 This year’s designated Official Kentucky Derby Watch is the blue-dialed, three-hand version of a watch that Longines launched to great fanfare last year. The Longines Conquest V.H.P. (the initials stand for “Very High Precision”) is the modern version of a watch Longines introduced in 1984 — which was in turn the product of many decades of Longines’ technical innovations in quartz-powered timing. The watch, available in a three-hand/date model and a chronograph version, is equipped with a quartz caliber developed exclusively for Longines by the movement-making colossus ETA, its sister brand within the Swatch Group. The movement — dubbed Caliber L288.2 in its three-hand-with-calendar version and L289.2 in the version with chronograph functions — is notable for its very high degree of precision for an analog watch (± 5 seconds per year) and its use of a so-called GPD (gear position detection) system that quickly resets the watch’s hands after an impact or exposure to a magnetic field. Longines has also equipped the movement with an exceptionally long battery life of nearly five years — which, the brand points out, gives this watch an advantage over its “connected” sports-watch competitors, which require regular battery recharging — and, like its 1990s predecessor, a built-in perpetual calendar.

The three-hand/calendar models of the Conquest V.H.P. are available in 41-mm- and 43-mm-diameter stainless steel cases; the chronograph models are in 42-mm- and 44-mm-diameter stainless steel cases. Black, silvered, blue, or carbon dials are available for all models, with two applied Arabic numerals at 12 and 6 o’clock (the chronograph model has only the “12,” with the “6” replaced by a subdial) and nine applied bar indices, treated with Super-LumiNova, for remaining hours. All the dials are graced with a red “V.H.P.” inscription, either directly above or directly below the center; the cases are water-resistant to 50 meters.

The chronograph dial has a tricompax layout with a 30-minute counter at 3 o’clock, a 12-hour counter at 9 o’clock, and a 60-second counter in the center. Each model incorporates an “intelligent” crown to set and change the time and date, and an E.O.L. (end of life) indicator to signal to the owner when the battery is nearing the end of its life: when the energy in the battery ebbs, the seconds hand warns the owner by jumping in five-second rather than one-second increments. The Longines Conquest V.H.P. collection all come on stainless steel link bracelets, with triple-folding safety clasps operated by push-piece opening mechanisms. For more on the history of the VHP watch, and to see other versions, click here.

As in previous years, winners of all the big races — including the Longines Churchill Distaff Turf Mile, a turf race for fillies and mares for which the Swiss brand is title sponsor — were awarded models from the Conquest Classic Collection. Derby winning jockeys, trainers and owners received the Conquest Classic Moonphase, a watch whose design was influenced by the refined elegance of equestrian sporting events, which — Longines would have you know — the brand has been sponsoring since 1878. The watch has a diameter of 42 mm and contains an automatic movement, Caliber L678, made for Longines by ETA, which combines, among other functions, a chronograph with a moon-phase display. The case — available in steel, in two-tone steel and rose-gold, and in 18k rose gold — is water-resistant to 50 meters. The dial is set with nine applied indices coated with Super-LumiNova. The chronograph’s 12-hour counter shares a subdial with the the moon-phase display 6 o’clock; the 24-hour second-time zone indicator joins the small seconds display on the 9 o’clock subdial; and another subdial at 12 o’clock serves as the chronograph’s 30-minute counter and displays the day and month in a dual window. The date is indicated on a numbered scale surrounding the dial by a half-moon-tipped central hand. It has a transparent sapphire caseback showcasing the watch’s mechanical movement. It is available on a black alligator strap, on a steel bracelet, and on a two-tone, steel-and-rose-gold cap bracelet, each with a triple-folding safety clasp.

Derby-winning trainer Bob Baffert and jockey Mike Smith each received the stainless steel version with white dial, while Justify’s owner Kenny Trout received the model in steel and gold with white dial. (I would think Baffert must have quite the collection of Longines watches at this point.) Kentucky Oaks winner Monomoy Girl’s co-owner, Sol Kumin, received the Conquest Classic Moon Phase in steel and gold with a black dial, while the filly’s trainer, Brad Cox, and jockey, Florent Geroux, received stainless steel Conquest Classic Automatics. (To read about my first Derby excursion in 2015, in which I review the Moonphase version, click here; and for my report from the 2016 Derby, in which I had the chance to wear the limited edition version of the watch dedicated to 2015 Triple Crown winner American Pharoah, click here.)

Why do I count myself among the “winners” listed here? It’s certainly not because I won big on any of the races (though I came thisclose to breaking even on the weekend) but I did have the opportunity to wear another one of Longines’s recent releases, the exceedingly elegant men’s version of the blue-dialed Master Collection Automatic. It’s got the same sunray blue dial and leaf-shaped, rhodium-plated hands of the smaller ladies’ version but in a more masculine-sized 42-mm stainless steel case and a transparent back displaying the self-winding movement, Caliber L619/888, with a 25,500-vph frequency and a 64-hour power reserve. It’s big and shiny enough to draw attention but also thin and discreet enough to slide under a shirt cuff, and made an ideal wrist companion for the ultra-fashionable crowds I encountered over the weekend at Churchill Downs’ dressy, ultra-luxe Mansion and rowdy, celebrity-packed Turf Club, as well as during dinners at Milkwood and Le Moo, two of Louisville’s trendiest high-end restaurants, and the inevitable after-dinner drinks at Jockey Silks, the sublime bourbon bar at the Galt House Hotel — or, as I like to call it, My Old Kentucky Home Away From Home. Onward to the Preakness!

No Responses to “Longines’ Ticking Thoroughbreds: The Winning Watches of the 144th Kentucky Derby”