The Volvo Ocean Race is undeniably the world’s premier ocean race and one of the most demanding team sporting events in the world. Over the course of nine months, the teams will sail 39,270 nautical miles, crossing the globe’s most treacherous seas. IWC Schaffhausen will be the official timekeeper for the 2011-2012 edition.

The 2011-12 race will start in the Spanish port of Alicante in October 2011 and finish in Galway, Ireland, in July 2012. The course will include stopovers in Cape Town (South Africa), Abu Dhabi (UAE), Sanya (China), Auckland (New Zealand), Itajai (Brazil), Miami (USA), Lisbon (Portugal) and Lorient (France). It is a unique blend of onshore glamor, offshore drama and physical endurance as teams battle the sea in a race where individual legs can stretch over 6000 nautical miles. The first race, known as the as the Whitbread Round the World Race, took place over 37 years ago and covered 31,250 nautical miles.

IWC will present the 24-hour record prize per race leg, which will be awarded during the prize-giving ceremony at each host port. They will also award a special prize for the fastest team over 24 hours in the Volvo Ocean Race 2011-12. This prize will be presented at the end of the race in Galway, July 2012.

In the past two editions of the race, Volvo Open 70s have broken the world 24-hour monohull record. Ericsson 4, the overall winner of the Volvo Ocean Race 2008-09, sailed an impressive 596.6 nautical miles in one day. There is every chance that this achievement will be surpassed in the forthcoming race and every Volvo Ocean Race team will be striving to reach this goal. A prospect that is naturally very exciting for IWC.

For complete information about the race, including videos, dates, and the full race route, visit the official Web site at www.volvooceanrace.com.

END_OF_DOCUMENT_TOKEN_TO_BE_REPLACED 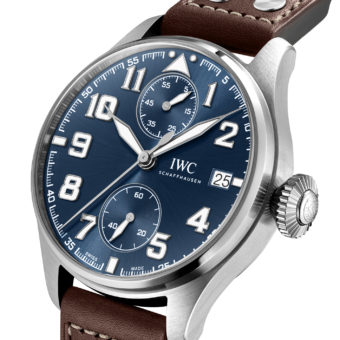 IWC Crowns a Year of Pilot Milestones with ...