We’ve covered the Longines Conquest V.H.P. (Very High Precision) multiple times since it was first announced back in March, but it finally made its U.S. launch last night at the brand boutique in lower Manhattan with ambassador and tennis legend Andre Agassi. What I find so interesting about this super accurate quartz watch is that while so many brands are panicking and jumping into the smart watch realm with lackluster results, Longines has doubled down and made what might just be one of the most accurate quartz watches ever. While other hyper-accurate quartz watches have been around for awhile — such as the Bulova Precisionist, Citizen Chronomaster, Breitling Superquartz, and Grand Seiko 9F series to name a few — there hasn’t been a Swiss watch that approached the exacting precision that the new V.H.P. collection boasts at ± five seconds per year.

You heard that right: ± five seconds every 365 days. That’s less than half a second every month.

One of the coolest features of this watch is the gear position detection system that allows the watch hands to automatically re-sync if they’re accidentally displaced by shock or a magnetic field. It also boasts a perpetual calendar in the date, meaning the timepiece knows the length of each month and when a leap year occurs, so you won’t ever have to mess with the date. The crown also has this funky trick where you can set the watch either by slowly ticking off minute-by-minute or, with a quick turn, the hour hand will jump by the hour so the minute hand stays accurate.

We had a few minutes to chat with Longines Vice President Juan Carlos Capelli at last night’s event to get an even better understanding of this fascinating quartz collection.

Why did you decide to bring the V.H.P. back now after all these years?

Well it is our 185th anniversary this year so we asked ETA to create the best quartz movement ever. So they built the V.H.P. movement and it is the most precise movement Longines has ever made.

How many years of development went into this watch?

It took two to three years to build and develop the movement.

The Conquest V.H.P. has an in-built system that re-synchronizes the hands after exposure to shock or a magnetic field. Why didn’t you go with a satellite synchronized movement instead?

We decided to do a watch because that’s what we know how to do. We don’t want to mix connectivity into it. We’ve been doing watches for 185 years; we aren’t doing electronic goods. So we decided to focus on making a very accurate movement that could still be called a watch.

In the past, Longines set several precision records at the Neuchâtel Observatory. How do you define the “extreme precision” of the new Conquest V.H.P.?

Previously every record was for automatic watches and this is a quartz watch. We can not compare both technologies as they are not the same. Now today, thanks to the Conquest V.H.P. we are making the best quartz movement, but we have always had accurate and precise watches since the beginning. Our first pocket watch in 1867 received an award for precision in Paris. The goal of Longines was always to be precise and elegant and I think the new Conquest V.H.P. is the perfect example of tradition.

Does the Conquest V.H.P. represent Longines’ answer to a smart watch?

We are doing watches and not electronic goods, we try to do the best of what we know how to do as watchmakers. This could be seen as a kind of response [to smart watches], but we can only do the best of what we know. And we had to make a real Swiss product. With Longines, the movement is always 100% Swiss. We don’t want to add something from outside that world and so we decided to make a modern watch without any constraints.

What is the market for high accuracy quartz in 2017? Is it the established collector, a younger audience, professionals, or just general watch people fascinated by high accuracy? Who did you have in mind when you were developing the watch?

Probably a younger audience because we put this movement in the Conquest collection which is filled with sporty watches. You have different sizes, different dials, and colors, and your watch can fit a large part of the population. We say at Longines: “We have a watch for every wrist.” And the Conquest V.H.P. collection was designed with that in mind. This movement is a nice addition to the rest of the collection.

No Responses to “Talking with Longines Vice President Juan Carlos Capelli about the Conquest V.H.P.”

END_OF_DOCUMENT_TOKEN_TO_BE_REPLACED 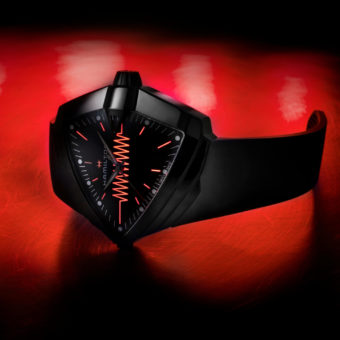