Switzerland-based Bucherer, Europe’s leading retailer for watches and jewelry, announced the acquisition of Tourneau LLC, the largest luxury watch seller in the United States, back in January 2018. Since then, the watch industry and those who follow and cover it have anxiously awaited what this merger of timepiece titans will mean for both companies and their business models. The COVID-19 pandemic put many of those plans on hold throughout 2020, but with the slow easing of restrictions in Summer and Fall 2021, the new Bucherer USA appears ready to forge ahead. Ira Melnitsky, who played a vital role in the sale of Tourneau to Bucherer and now serves as President of Bucherer USA, spoke to WatchTime about the challenges of navigating this major merger through the pandemic and what’s on the horizon this fall.

WT: As CEO of Tourneau, what was your role in the acquisition by Bucherer?

IM:  When I joined as CEO in 2013, Tourneau was private equity-owned and I knew that it was in a turnaround situation. It was my role to begin the process of selling the company on behalf of the private equity firm, and as I’ve said many times before, with true sincerity, there couldn’t have been a better buyer than Bucherer.

WT: The new partnership between Bucherer and Tourneau has been described as not just a merger, but a marriage. What does each business bring to the collaboration that makes the whole of its parts stronger?

IM: Like in any successful marriage, both parties brought their own strengths, and one plus one became more than two. We both have very long and respected histories in our respective markets, but Bucherer is very unique in that it has a 130-year history of family ownership. They have been very, very open and gracious in terms of the exchange of ideas. Because of that family ownership, Bucherer has a tremendous long-term vision that they brought to us. They also have exceptionally high standards, and we at Tourneau have been able to listen and learn from them on many ideas and initiatives that we had started prior to being part of the Bucherer Group. In terms of what we’ve been able to bring to them, in addition to the obvious access to the United States market, we brought our expertise in certified pre-owned watches, which is a business Tourneau has been in for decades, and they’ve been at the table to very successfully launch that business in Europe. I think we’ve also taught them that the U.S. market is not just one market but very diverse.

WT: This merger was announced back in 2018, big plans got underway the following year, and then the Covid-19 Pandemic hit and impacted the whole industry. How specifically did it impact your plans for co-branding and re-opening?

IM: Like everybody else we had to put things on pause. We were very excited to begin work on our new flagship Time Machine store, which will be opening later this summer, and we planned to very quickly renovate our entire network through the United States. That construction all had to come to a halt as did our other projects. We resumed construction on the Time Machine last summer, but of course none of us knew at this time last year how fast things would open up. We’re happy they’re finally opening up now. Thanks to Zoom and Teams and other means, the work and exchange of ideas never really stopped.

WT: How does the re-branded Bucherer USA respond to the rise in digital commerce that resulted from this pandemic era?

IM: Tourneau was always a leader in thinking digitally and has been involved in e-commerce for more than 15 years. We’d actually been building a database for decades, and made the decision in 2013 and ’14 to re-platform and re-launch all of our omni-channel initiatives. Now we have a unique opportunity to speak to all our visitors — our international customers, domestic customers, businesspeople and traveling consumers — with one voice. So there are many people who live in New York but visit Geneva, or Lucerne, or Zurich, and maybe have received e-mails from two different entities. Now we have the ability to bring that together and speak to them as one.

WT: The relaunch of the Time Machine comes with a new logo that represents the merging of the Bucherer and Tourneau brands. Could you speak a bit about that?

IM: As our stores come online, the storefronts will read Bucherer 1888, which is our retail name. Our marketing, our internal communication, even our shopping bags will all bear what we call a hybrid logo, which includes both the Bucherer and Tourneau names. This transitional logo will exist for about a year, which is the period in which we’ll be re-branding all of our stores across the country, and it will give us the opportunity to talk about this marriage of Tourneau and Bucherer coming together — which will be complete in 2022 when all the stores have been re-branded.

(An extended version of this interview will appear in the September-October 2021 issue of WatchTime.) 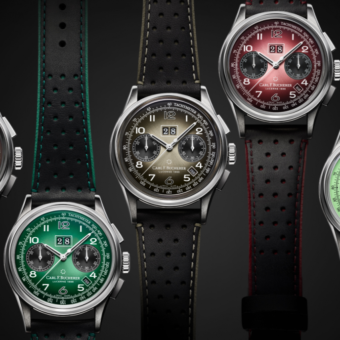