Eberhard & Co. was founded in La Chaux-de-Fonds — then, as now, the epicenter of Swiss watchmaking — in 1887 but moved its operations to neighboring Bienne in 1975, where it has been based ever since. This year, the venerable watch maison not only returns to its original home but also celebrates the milestone with the release of an all-new exclusive caliber.

The Baroque-style building in La Chaux-de-Fonds, constructed by Eberhard’s founder Georges-Lucien Eberhard, is famously known as La Maison de L’Aigle (“The House of the Eagle”) for its signature architectural flourish, a large sculpture of an eagle towering atop the dome. Once home to both watchmaking workshops and residential quarters, the structure is listed by UNESCO as part of the “urban manufacturing heritage” of the Swiss watchmaking city. The historical eagle, an iconic sight for the residents of La Chaux-de-Fonds worn down by a century of weather, has been meticulously restored as part of the grand re-opening.

Among the first products to be manufactured by Eberhard in its new/old home is an entirely new movement, the hand-wound Caliber EB 140, which will feature, according to the company, a harmoniously balanced design that emphasizes geometric shapes. Among its aesthetic highlights will be a balance wheel and gear train bridges with vagues circulaires finishing (circular Geneva waves), blued screws, and gold engravings. Eberhard & Co., which has long relied on outsourced movements for its watches in the modern era, says that the new caliber will be used in “timepieces with a vintage flair.”

3 Responses to “Eberhard & Co. Returns to Its Roots and Launches a New Caliber”

END_OF_DOCUMENT_TOKEN_TO_BE_REPLACED 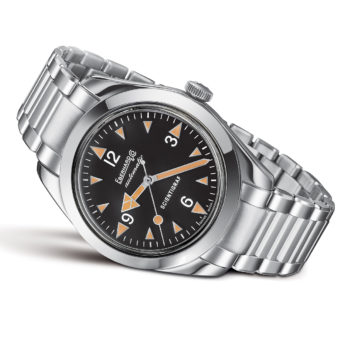