The trimaran l’Hydroptère has established itself as the fastest sailing craft on the planet, setting a new world speed record with an average speed of 50.17 knots (57.73 mph) over one nautical mile. Fifty knots per hour is a magical threshold for sailing, similar to the sound barrier for aviation. Alain Thébault and his ten-man crew achieved this feat at their speed base in Hyères, France on November 8th, in a 28-knot northwesterly wind. L’Hydroptère capped off a fantastic series of records posted in the Mediterranean and set a new benchmark in the world of sailing.

The 60-ft Hydroptère (from the Greek hydros, water, and ptera, wing), is a hydrofoil trimaran (the foils are actually underwater wings). It is a sleek and elegant craft with a central hull and a mast more then 90 feet high, stabilized by two side floats separated from the hull by huge 79- foot carbon crossbeams built at the Airbus plant in Nantes. The innovative design of the boat, which flies on submerged wings, cleverly constructed out of carbon and titanium, make it much faster, more durable and lightweight (only 6.5 tons). The flight envelope of the prototype is continuously defined and validated on a 3D flight simulator developed specifically for this carbon bird, which represents the new generation of extreme sailing.

Alain Thébault, designer and skipper of this Formula 1 of the seas, had always dreamt of making a boat fly. After 20 years of research and development, the flying boat is now a robust, powerful craft thanks to the help of eight retired engineers from Dassault Aviation and EADS-Airbus who volunteered their time. l’Hydroptère is the perfect combination of cutting edge technology, performance and human adventure. This unique project was created by a team of sailing buffs, engineers, technicians and aircraft manufacturers. In 2006, the Ecole Polytechnique Fédérale de Lausanne (EPFL) joined the team and became “Official Scientific Adviser” to assist in advanced fields such as aero-hydrodynamics, composite materials, structural behavior and video imaging.

Audemars Piguet is well-established as a sailing sponsor at the highest levels. As early as 1985, the watchmaking firm accompanied Peter Fehlmann, winner of the Whitbread. In 2000, it participated in its first America’s Cup, with “Be hAPpy”, and then went on to take part in the Swiss victories in the 31st and 32nd America’s Cup. In 2008 and 2009, the watchmaker was alongside Ladycat on the Decision 35 circuit on Lake Geneva. Today, it has become one of two main sponsors of l’Hydroptère.

You can learn more about this amazing sailcraft at www.hydroptere.com.

END_OF_DOCUMENT_TOKEN_TO_BE_REPLACED 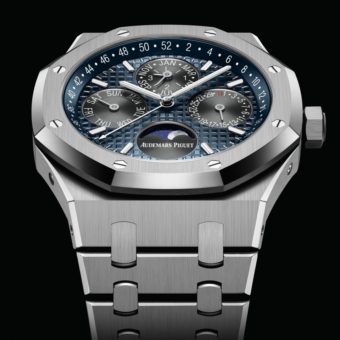