On September 22, HSH Prince Albert II of Monaco will preside over the fourth Only Watch auction of exceptional watches. The proceeds of this event, organized by Antiquorum Auctioneers, will be used to fund research into Duchenne muscular dystrophy. To support this worthy cause, Richard Mille has contributed a unique and symbolic watch to be offered during this charity auction.

Launched in 2005 by Luc Pettavino, President of the Monegasque Association Against Muscular Dystrophies, Only Watch mobilizes the world’s most prestigious watchmakers who donate unique and limited pieces to be auctioned during the Monaco Yacht Show. All proceeds are used to fund research into Duchenne muscular dystrophy, an extremely debilitating neuromuscular disease that affects one boy in every 3500.

Having supported Only Watch from the beginning, Richard Mille wanted to donate one of its most emblematic creations to Only Watch 2011: the RM 027 tourbillon developed for and in collaboration with Rafael Nadal. Nadal has worn this watch in every match he has played since 2010, which is unique in the history of tennis. The RM 027 to be auctioned is the very watch worn by Rafael Nadal when he won the 2011 Monte Carlo championships for the seventh year running. This RM 027 also served as the prototype for pre-production testing, the results of which were obviously positive. The mechanism has never failed during any of the matches played by Rafael Nadal while wearing this watch.

In April, at the end of the Monte Carlo championships in Monaco, Rafael Nadal met Luc Pettavino’s son Paul, a 15 year old boy who is struggling against Duchenne muscular dystrophy. Some 250,000 victims suffer from this disease across the world. In a symbolic gesture, the world’s Number 1 tennis player handed Paul his watch, the sale of which will help fight his disease.

Read more about Only Watch at the official Antiquorum website.

The images below may be enlarged with a click.

Below, Rafael Nadal with Luc Pettavino and his son Paul.

END_OF_DOCUMENT_TOKEN_TO_BE_REPLACED 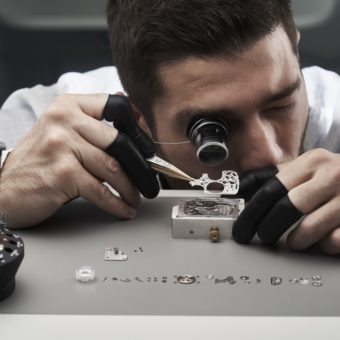