For this week’s “Vintage Eye,” we turn our attention to the vintage re-issue Longines Avigation BigEye. The watch, released late last summer, was one of the most critically-acclaimed timepieces of 2017, and for good reason. With its no-nonsense case, straightforward yet unique dial, and relatively accessible price point, the BigEye represents some of the best attributes in the vintage-revival trend for consumers looking to enter it. For the brand’s work, the watch received plenty of attention from the media and enthusiasts, but also received the “Best Revival” award at last year’s Grand Prix de l’Horlogerie de Genève (or GPHG, for short), the industry’s premier awards show. 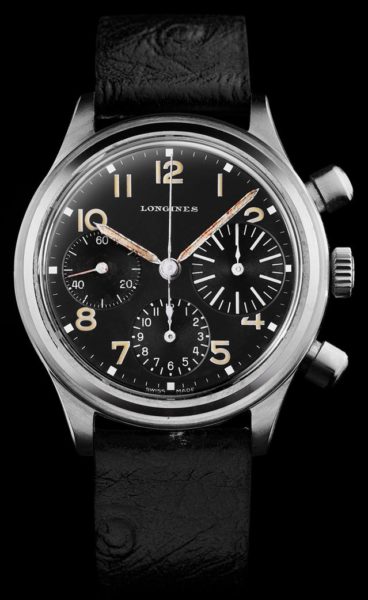 Yet, for all the attention the re-issue has received, the original BigEye the modern watch is based on is not well known. When I first saw the watch, I thought it must have been inspired by the “BigEye” designs popular in some chronographs from the late 1960s and into the ‘70s, a dial format distinguished by an enlarged right subdial on a watch’s face. Instead, the brand said it was based on a 1930s aviation design from a singular watch brought to the brand’s museum by a collector. Unfortunately, they are still unsure of the exact year of production, and, as of yet, no other copies have surfaced. Ultimately, whether the watch was mass produced or if this singular model was a prototype of some sort is irrelevant. Longines claimed and verified the timepiece as part of its history and then had the know-how to bring it back to market and see if it could fair better in the 2010s than it did in the 1930s, which, as you can obviously tell, it has.

The Avigation BigEye (ref. L2.816.4.53.2/4) uses a 41-mm brushed steel case, sitting prominently on the wrist and featuring two large pump pushers — all together giving it a very solid and durable appearance. Through each aspect of the piece there are obvious nods to a military style from the era, with a clear focus of form following function in the utilitarian design. On its black dial, the watch has simple yet distinctive attributes throughout, with its basic black-white design and added green SuperLuminova hints running throughout the large Arabic numerals and hands, as well as its three sub-dials for running seconds at 9 o’clock, a 30-minute counter at 3 o’clock, and a 12-hour counter at 6 o’clock. As you might expect from the name, what makes these features truly distinctive is the “BigEye” 30-minute subdial, but also the style of hands used throughout such as the sword style for the hour and minute hands, the counterbalance on the chronograph seconds hand, and the unique design for the 3 and 6 o’clock subdials.

The last major feature on the face is seen in the vintage-style Longines logo, with the watch having a small “automatic” text underneath to account for the modern movement compared to the historical hand-wound. The movement here is the automatic Caliber L688.2, which is based on the ETA A08.L01. It’s capable of a 54-hour power reserve and hidden behind a specially engraved solid caseback. The new BigEye is currently priced by the brand at $2,625, and — likely due to demand — is not often found for much less at dealers. 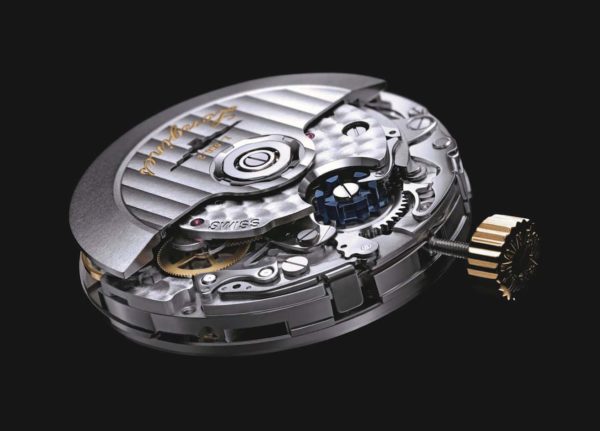 The new watch appears to be, with few exceptions, a consistent replica of the original. Most of the major details of the vintage model are shared in the modern like the shape of the thick steel case, the dial configuration (see the “BigEye”), and the style of the unique hands for the dial and subdials.

Of the few differences, most seem to be for practicality’s sake for the modern watch wearer. For example, the vintage model, in all likelihood, used radium for luminescence, where the new timepiece has opted to accentuate with SuperLuminova. As well, while the brand could have opted to use a hand-wound movement for historical accuracy — and possibly slimmed down the case thickness by doing so — they chose an automatic, which is an easier movement to have for a daily wearer. Yet, note that while they “upgraded” the movement, they held restraint in the minimalist design by avoiding adding an additional date window. 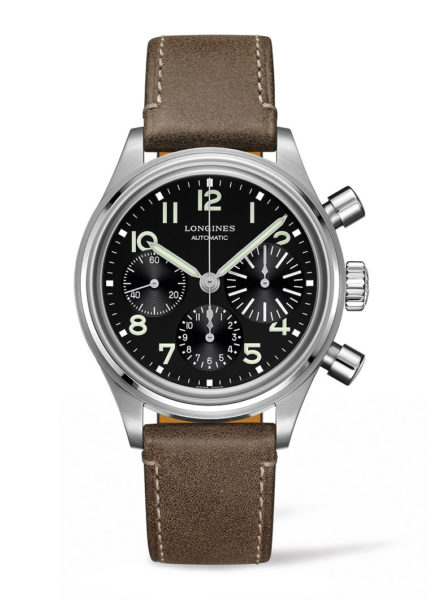 Next, notice the pushers on the vintage model seem to have rounded ends and appear much larger in proportion to the case as compared to the smaller flat edged contemporary version. This may have to do with the ease of production of the pushers, as few brands, if any, produce this vintage style today, but for the wearer, the design does give the watch a crisper appearance as a whole. The few other differences are the hands of the sub-dials do appear slightly larger, and, based on historical context alone, the vintage watch was probably smaller than 41-mm, but the brand did not provide exact measurements.

Longines, to its credit, is at the forefront of today’s vintage renaissance. With watches like the Legend Diver and Lindbergh Hour Angle providing the brand’s boutiques with plenty of heritage-focused designs, the brand has shown its finger is on the pulse of the vintage trend time and time again. The Avigation BigEye is another iteration of this expertise. While the watch itself lacks the rich history of many other pieces in its collections, the modern watch still held true to the design code of the vintage model while making only minor improvements. Overall, the watch has become a quick success and has set the bar even higher for a brand renowned for this type of watchmaking. 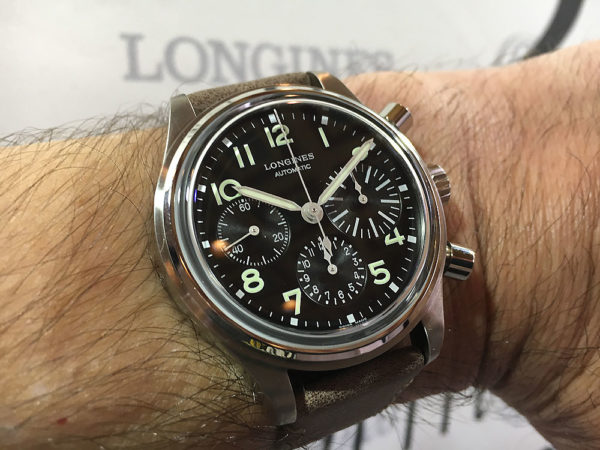 For the most recent article in the “Vintage Eye” series, in which we compare the Vacheron Constantin Historiques Triple Calendrier 1942 and 1948 to their historical predecessors, click here.

For the In-Between Moments: Frederique Constant ...

END_OF_DOCUMENT_TOKEN_TO_BE_REPLACED

TAG Heuer Declares “We Outside” ...