Although Vacheron Constantin has taken custom timepiece orders throughout its 260+ years of history – James W. Packard and Henry Graves Jr. were both notable patrons of that offer in the early 20th-century – the Geneva-based brand’s elite division of watchmakers known as Les Cabinotiers wasn’t officially established as its own division until 2006. While often operating in a sub rosa fashion to the rest of the firm’s operations, Les Cabinotiers attracts only the most affluent and esoteric of clients, and strives to achieve the highest levels of contemporary haute horlogerie.

The name comes from a reference to Geneva’s most gifted watchmakers of the 18th century who plied their trade in workshops, known as cabinets, placed in the cramped attics of the tallest buildings so that their workspace would be bathed in natural light for the longest portion of the day. These consummate craftsmen would receive orders from dignitaries across the European courts to build bespoke timekeepers for them that could convey their prestigious professional and social standing. Today’s Les Cabinotiers department is directly influenced by what its Age of Enlightenment forebears were accomplishing.

This is where Vacheron Constantin is able to operate to its full capacity and produce custom, one-of-a-kind timepieces that not only advance horology as a whole, but strengthen its relationships with its clients, who, by commissioning a watch, are taking part in a centuries-old tradition that very few modern brands are able to maintain in today’s fluctuating global economic climate. In this article, we run down five of the most important timepiece — some you may know already, some you may not — released by Les Cabinotiers in the past 16 years. 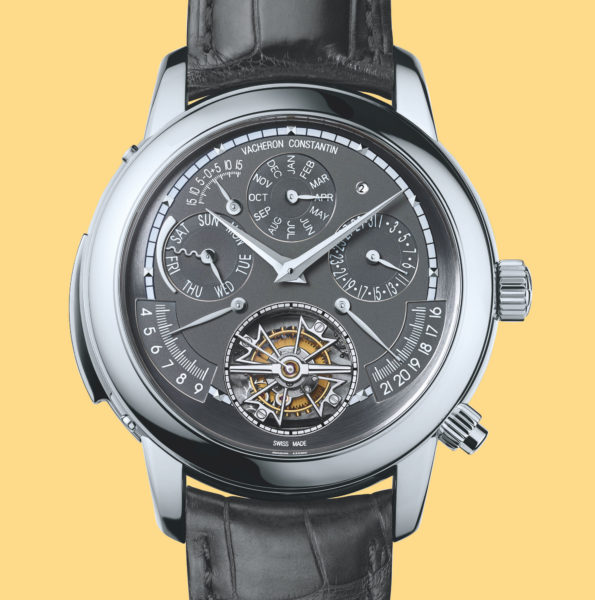 Launched in 2014, the Maître Cabinotier Astronomica brought together 15 haute horlogerie complications, including several astronomical ones displayed on the back of the dual-sided timepiece. the manual-wound Caliber 2755-b1 consists of 839 parts, all contained in a space measuring only 33.9 mm in diameter and 12.15 mm thick. The case housing all of these displays measures 47 mm by 19 mm. In addition to the time of day, the front displays include equation of time; perpetual calendar with date, day of the week, month and leap years; the power reserve; and the sunrise and sunset times. the one-minute tourbillon features a carriage shaped like the company’s trademark Maltese cross. The minute repeater incorporates Vacheron Constantin’s silent centripetal flying strike governor, which regulates the duration of the musical sequence. The back of this timepiece displays seven useful and interesting functions: a sky chart, the solstice, the equinox, sidereal time, the age and phases of the moon, the seasons, and the zodiac signs.

The research and development of Ref. 57260 led directly into 2016’s Maître Cabinotier Retrograde Armillary Tourbillon. This release borrowed the armillary tourbillon and the double retrograde indication found in Ref. 57260 and transferred it into a wearable wristwatch, the first – but not the last – time that has happened. The Armillary Tourbillon uses a double-axis tourbillon with an escape wheel and lever constructed of silicon and a tourbillon cage built of aluminum; there’s an interesting juxtaposition of classic and contemporary horology on display when combined with the more traditional diamond pallets. Vacheron Constantin filed for four patents during the watch’s construction.

Vacheron Constantin introduced the Celestia Astronomical Grand Complication 3600 at SIHH 2017. All functions, including 23 complications, are contained in an integrated movement, the manual-wound Caliber 3600, which was five years in the making. It incorporates six barrels (for a three-week power reserve), powering three dedicated gear trains: one for mean time, one for solar time and one for sidereal time. It features a perpetual calendar, as well as indicators for moon-phases, tide levels, sunrise and sunset, zodiac signs, seasons, solstices, and equinoxes. A mareoscope function depicts the alignment of the sun, moon, and earth. On the caseback is a celestial chart with the Milky Way, constellations of the northern hemisphere, and a power-reserve indicator. 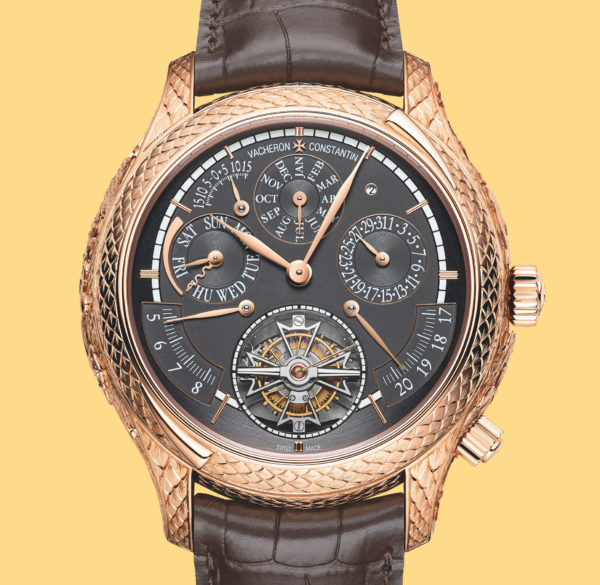 Released in late 2018, the Les Cabinotiers Grand Complication Phoenix is inspired by the legend of the Phoenix, the mythical bird that rises from its own fiery ashes to represent immortality. the watch packs no less than 15 complications into its meticulously engraved, 47-mm rose-gold case including a tourbillon (with a distinctive Maltese-cross-motif bridge), minute repeater, perpetual calendar, power-reserve indication, sunrise and sunset times, equation of time, sky chart, age and phase of the moon, sidereal hours and minutes, seasons and zodiac signs, and even a mechanism indicating the torque of the repeater’s striking mechanism. The manufacture movement, Vacheron Constantin’s manual-winding Caliber 2755, is composed of an astounding 839 components and endowed with a 58-hour power reserve. the case features two ancestral engraving techniques – bas-relief on the caseband and fine-line engraving on the bezel and caseback, combining to create a sculptural 3D effect for the ornate image of the legendary firebird that encircles the case.