Over the weekend, we introduced you to the Vacheron Constantin Les Cabinotiers Mécaniques Sauvages collection, an assortment of over 20 unique pieces that combines the firm’s 263 years of technical expertise with its renowned Métier d’Art capabilities. One of the more intriguing models we saw while in Paris for the unveiling was the Armillary Tourbillon, a literal beast of a watch that Vacheron has filed six new patents for.

These patents are highlighted by the instantaneous double retrograde hour and minute indicators on the right side of the dial. There’s a double-axis, one-minute tourbillon placed inside a Maltese cross, Vacheron Constantin’s iconic symbol, cage on the opposing side.

Like the Maître Cabinotier, the new Armillary model uses a double-axis tourbillon with an escape wheel and lever constructed of silicon and a tourbillon cage built of aluminum; there’s an interesting juxtaposition of classic and contemporary horology on display when combined with the more traditional diamond pallets. Other details include the usage of a spherical balance spring. The watch is further highlighted through a hand-engraved serpent that slinks around the outside of the red gold case.

Vacheron says that the model is available price upon request only, but due to the bespoke nature of the Les Cabinotiers department, it’s likely that the Armillary Tourbillon Serpent was produced with a client in mind.

Don’t forget to check out our previous coverage of the Mécaniques Sauvages and stay tuned for more exciting things to come from the brand at SIHH 2019.

END_OF_DOCUMENT_TOKEN_TO_BE_REPLACED 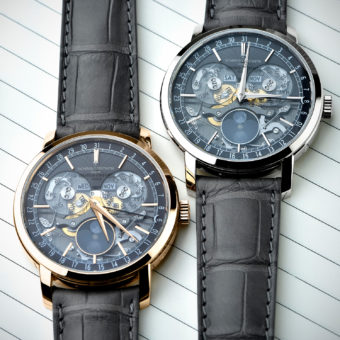