The “Les Cabinotiers” department at Vacheron Constantin is, without a doubt, the brand operating at the peak of its powers. After all, this is the part of the 263-year old firm that assisted in the birth of Reference 57260, otherwise known as the world’s most complicated timepiece, boasting 57 total complications. Last week, WatchTime was one of the select few American-based publications invited to join the brand as it unveiled over 20 new unique pieces to this highly limited catalog of timepieces. This new collection, which leans heavily on bestial motifs, has been given the name of Mécaniques Sauvages.

All the one-of-a-kind models presented boast the blend of artistic mastery and horological potency for which Les Cabinotiers department has become renowned. The handful of artisans and watchmakers that make up Les Cabinotiers’s team are some of the most skilled in the world and employ engraving and marquetry techniques that very few living people are able to accomplish. This highly-skilled unit follows in the steps of its forebears who were some of the most experienced watchmakers of the 18th century, focused on the creation of extraordinary timepieces by special commission. Today, all the models within Les Cabinotiers, including the new Mécaniques Sauvages line, are produced with the client in mind. This highly-limited, small-scale approach allows for experimentation and the ability to inject overarching thematic elements seen in a series like Mécaniques Sauvages.

It was only six weeks ago that my colleague Mark Bernardo wrote about Vacheron’s first pre-SIHH release — also produced by Les Cabinotiers — the Minute Repeater Tourbillon Sky Chart and Les Cabinotiers Grand Complication Phoenix. These fantastical unique pieces directly precede Mécaniques Sauvages but are similar in their grandiose nature and, for some models, displays of avian engraving. 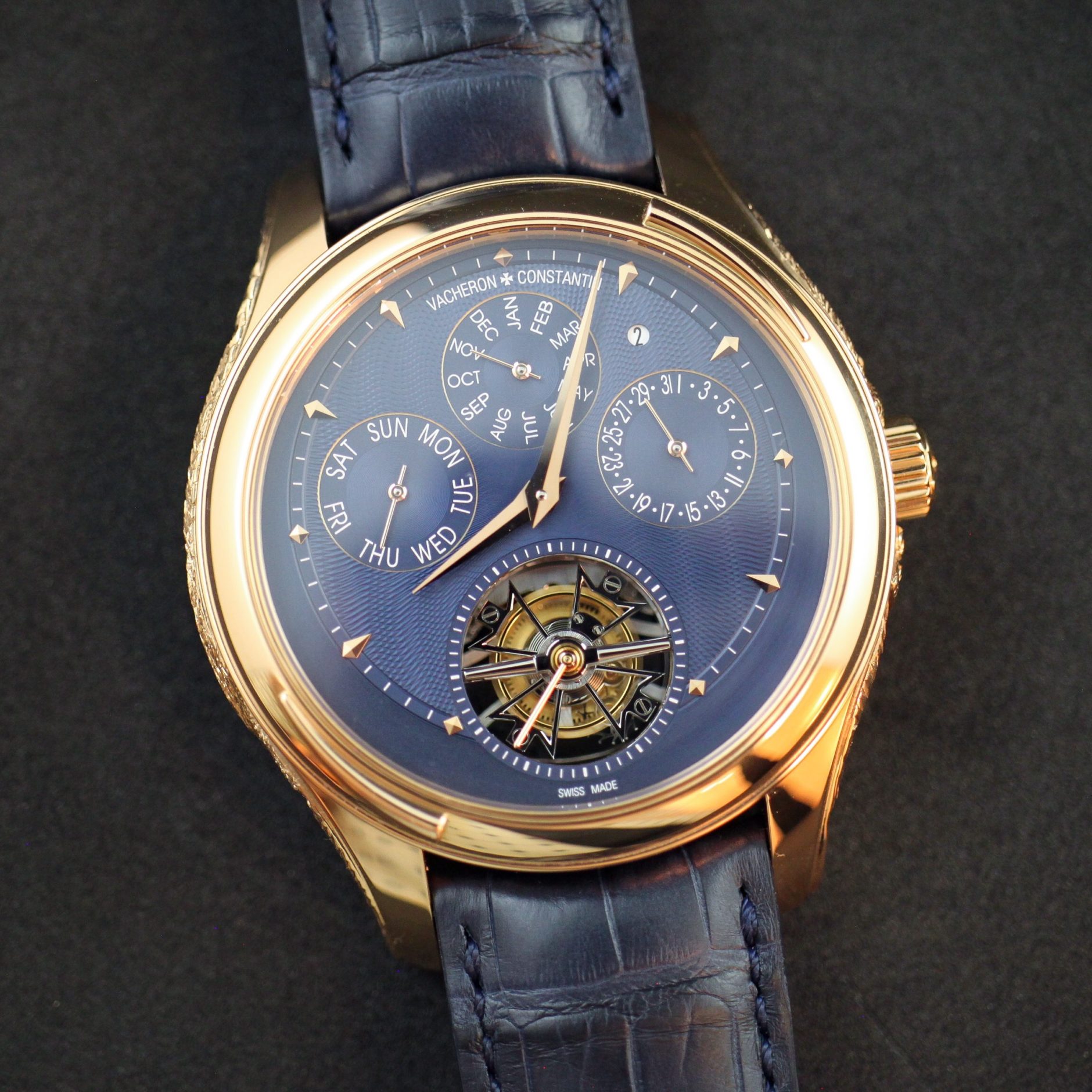 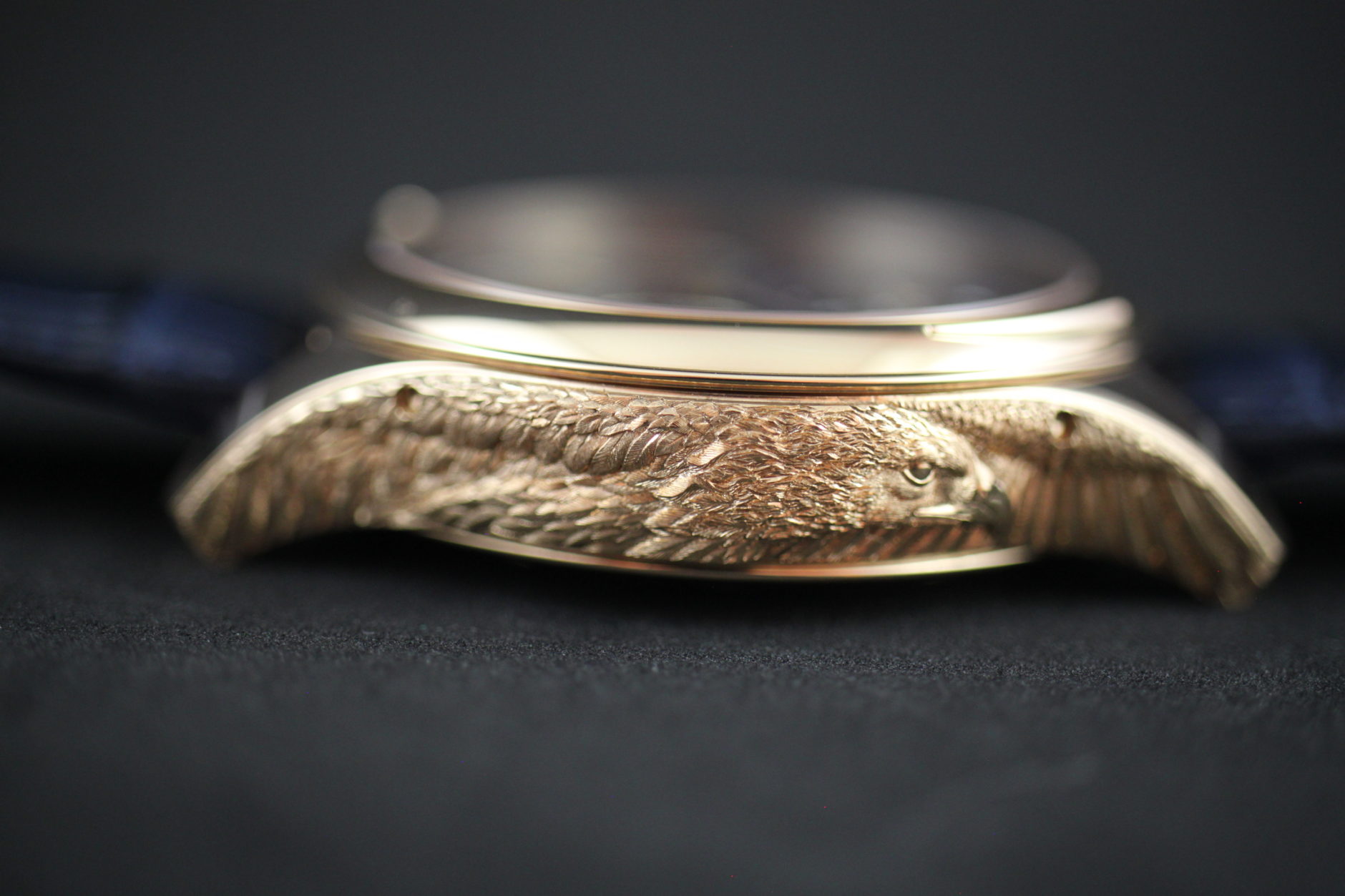 The eagle engraving on the case of the Vacheron Constantin Calibre 2755 Eagle.
2/10 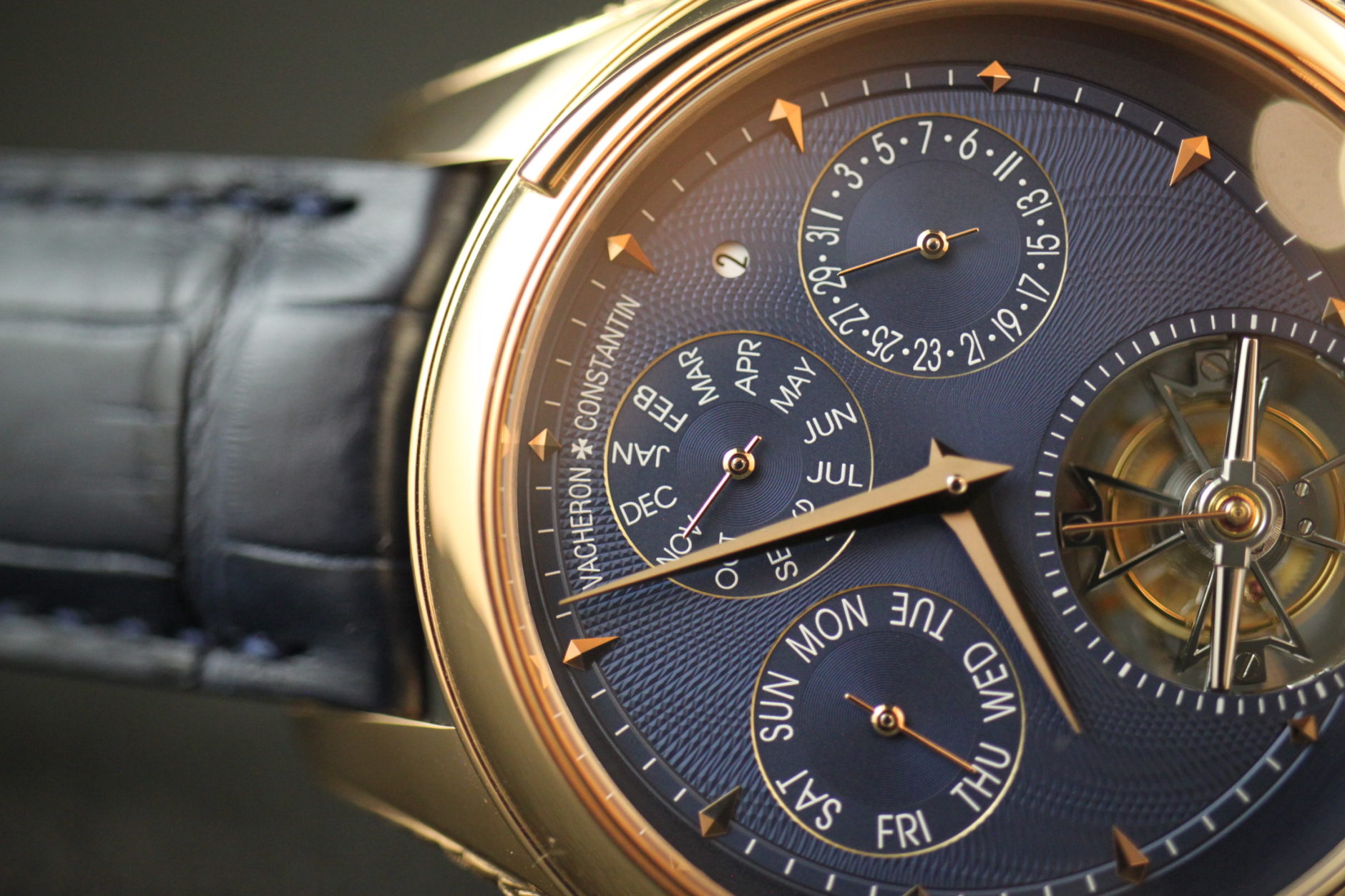 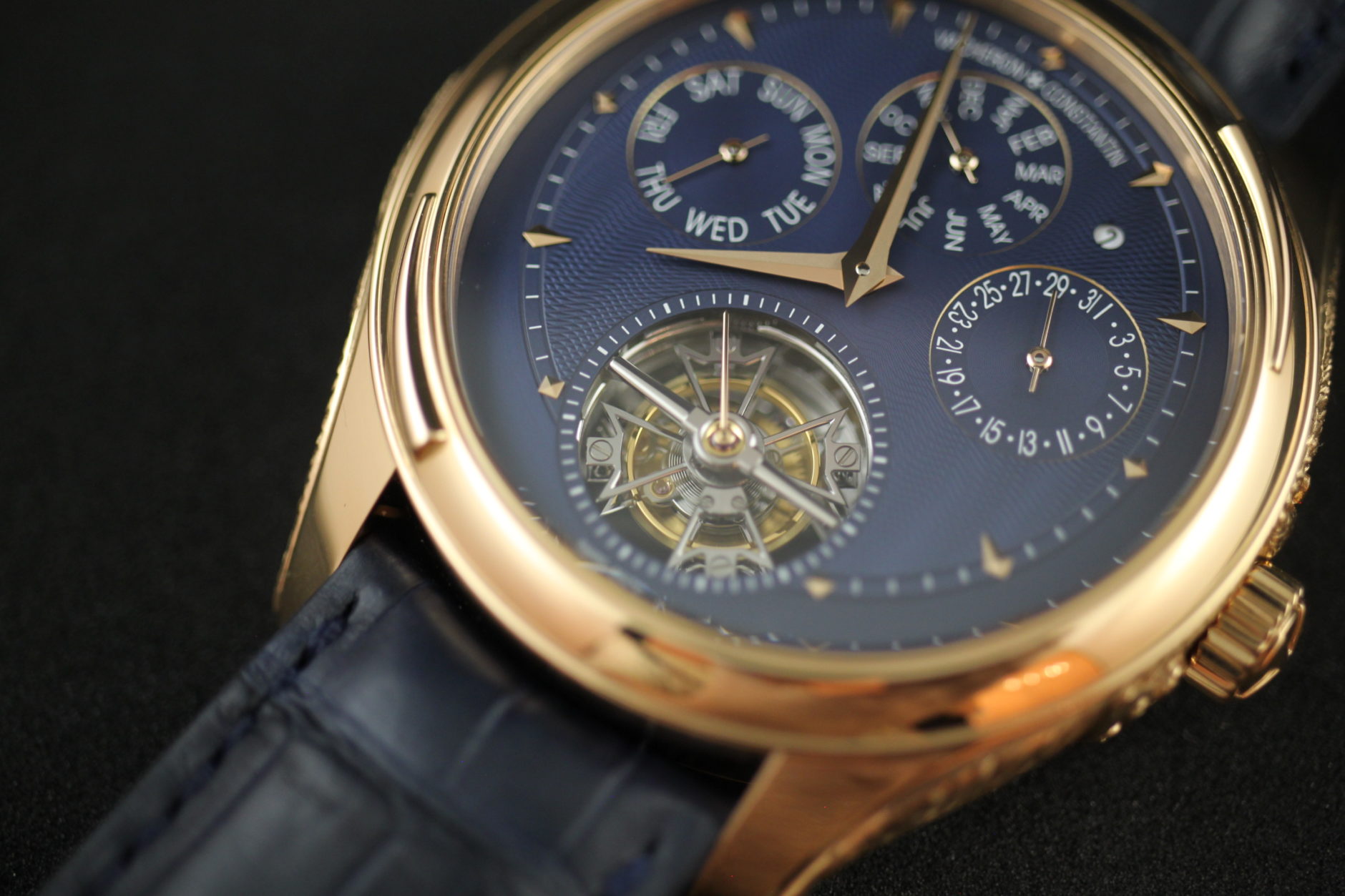 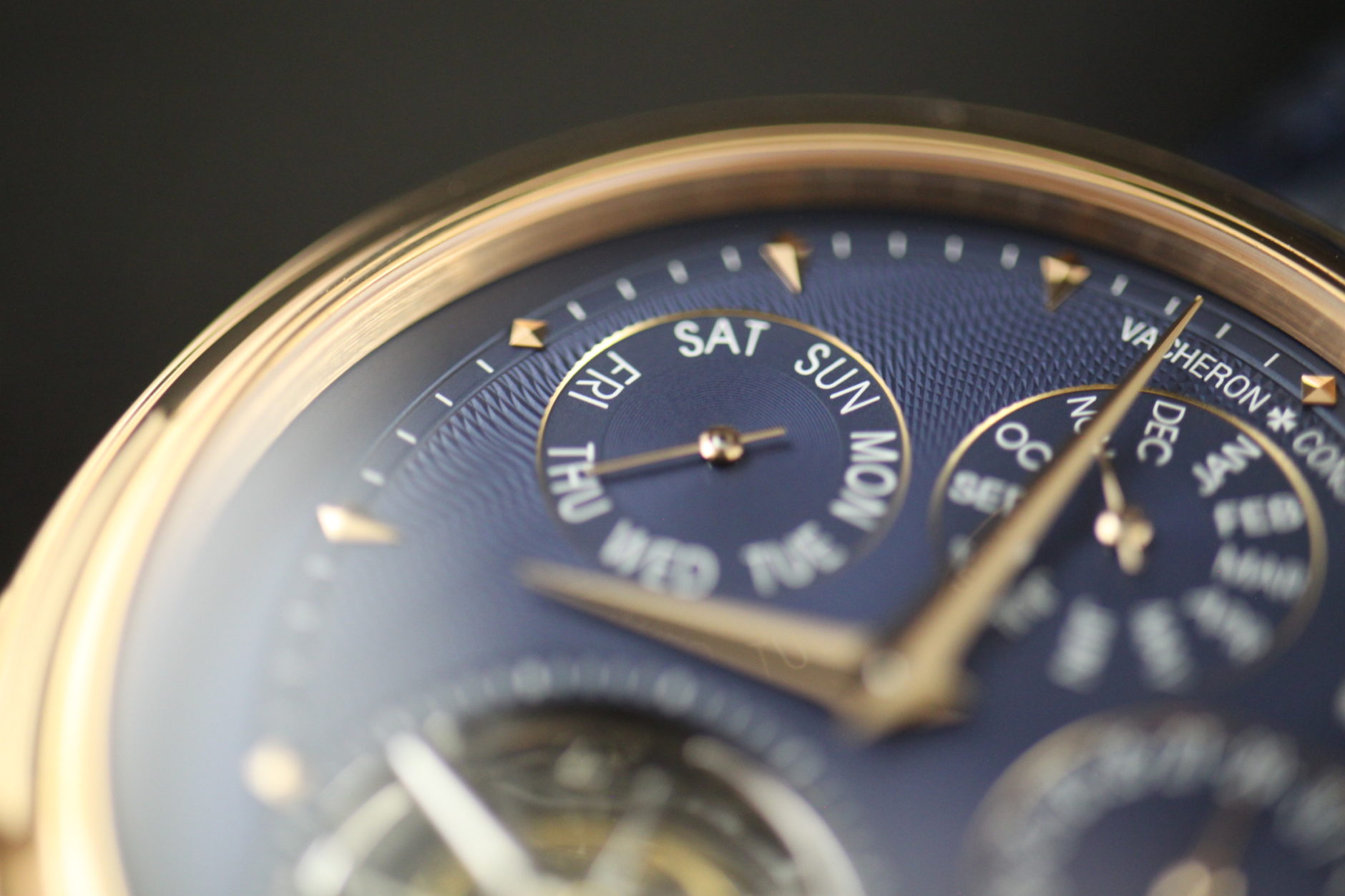 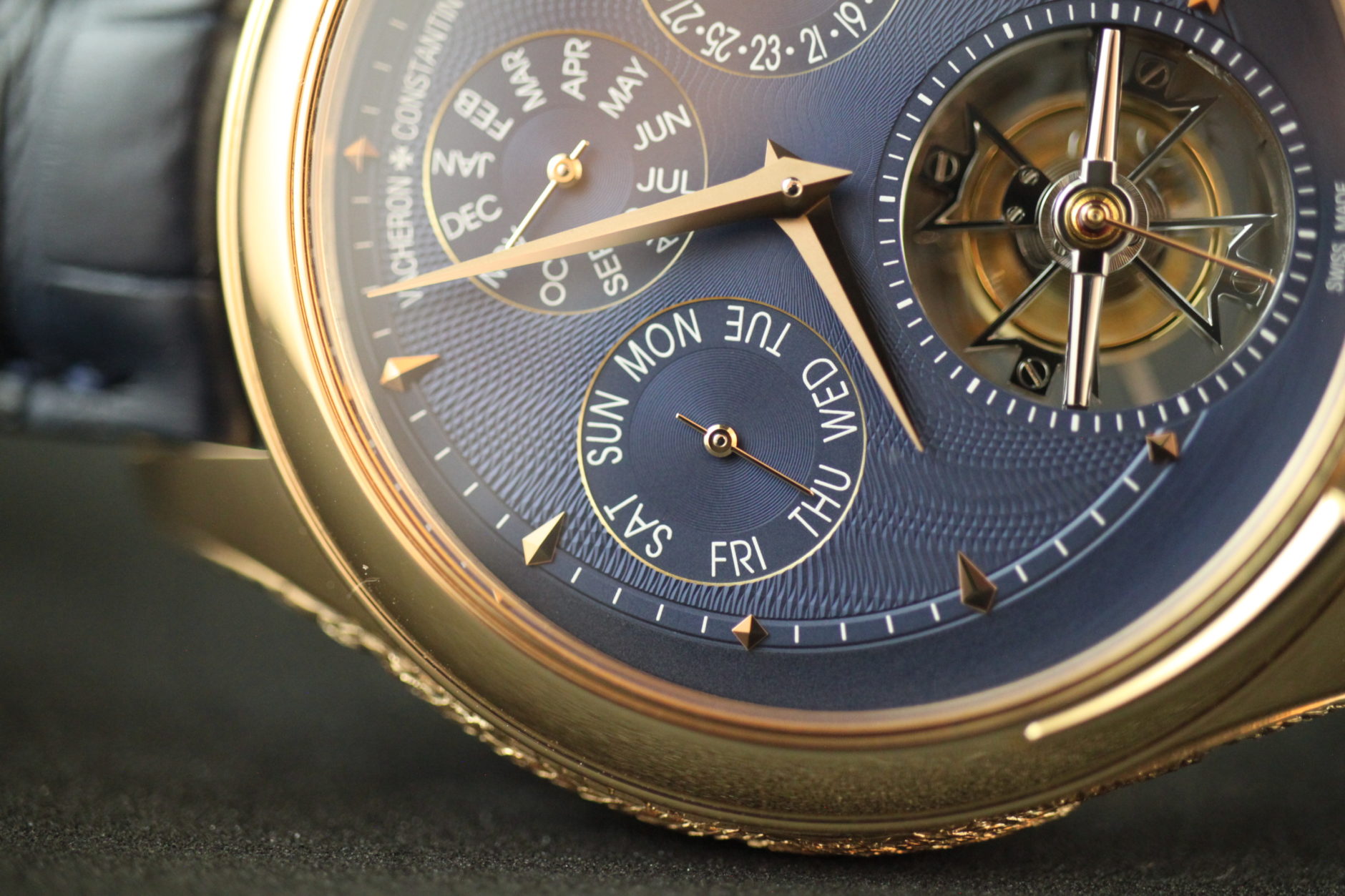 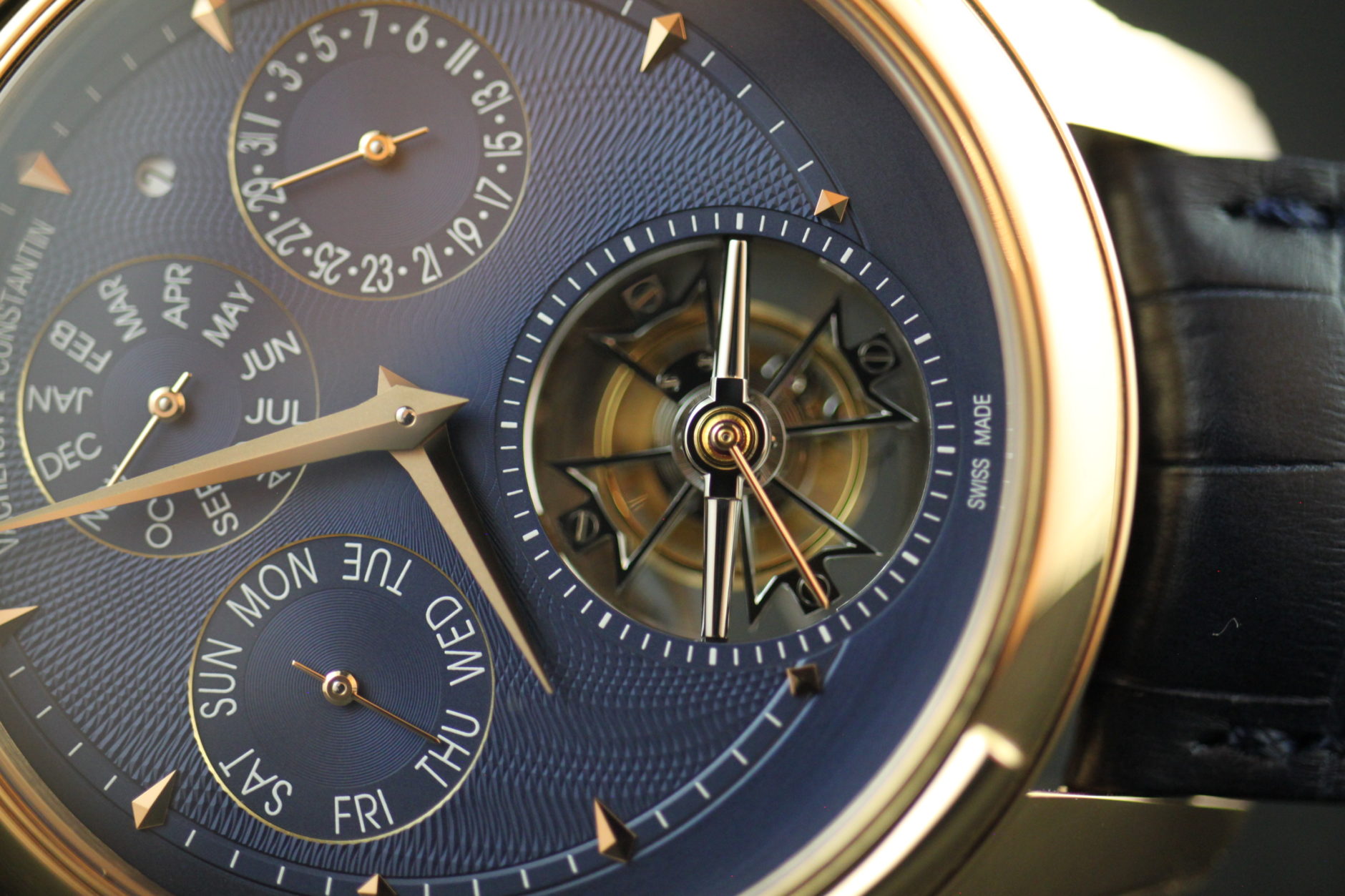 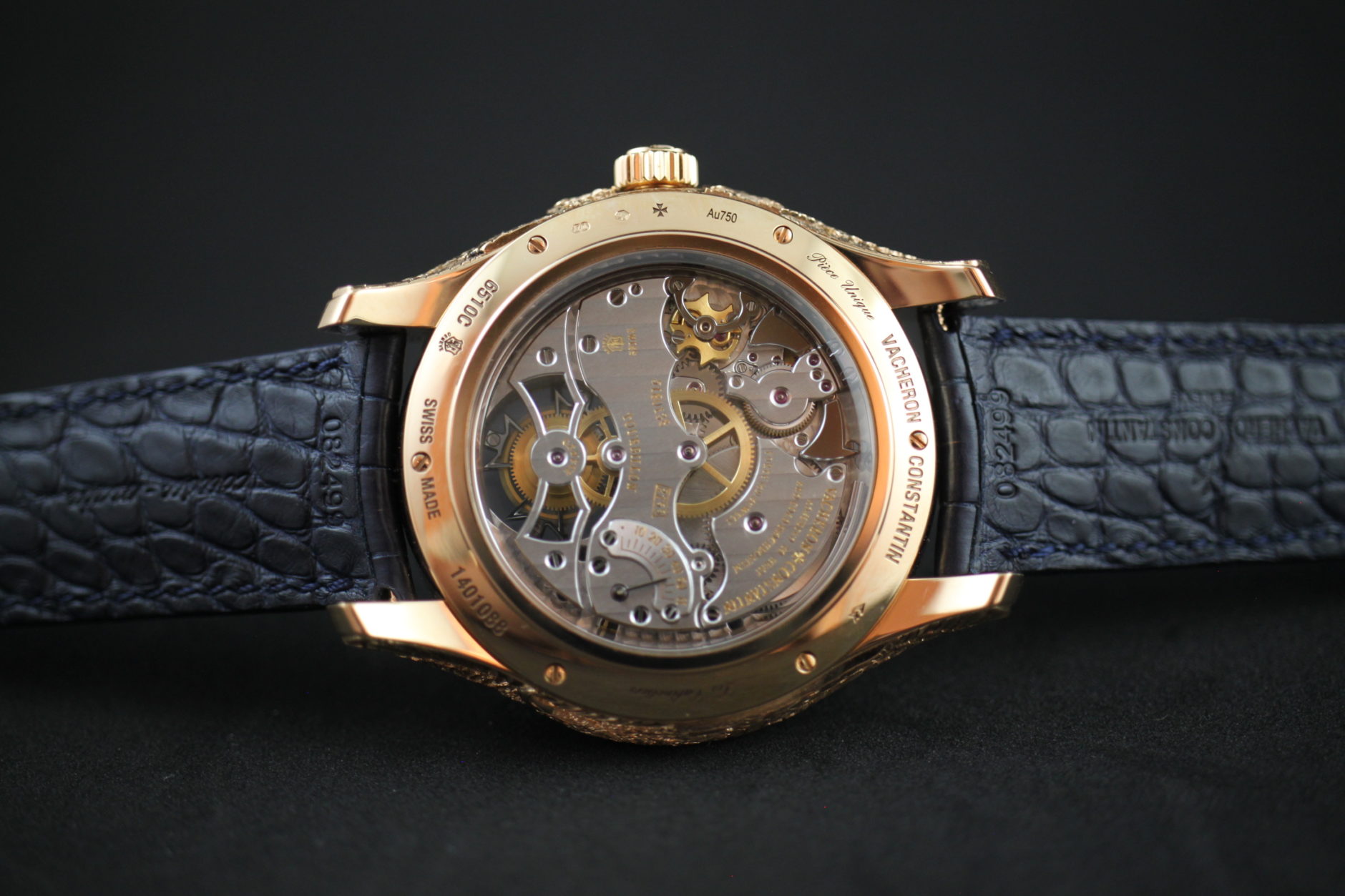 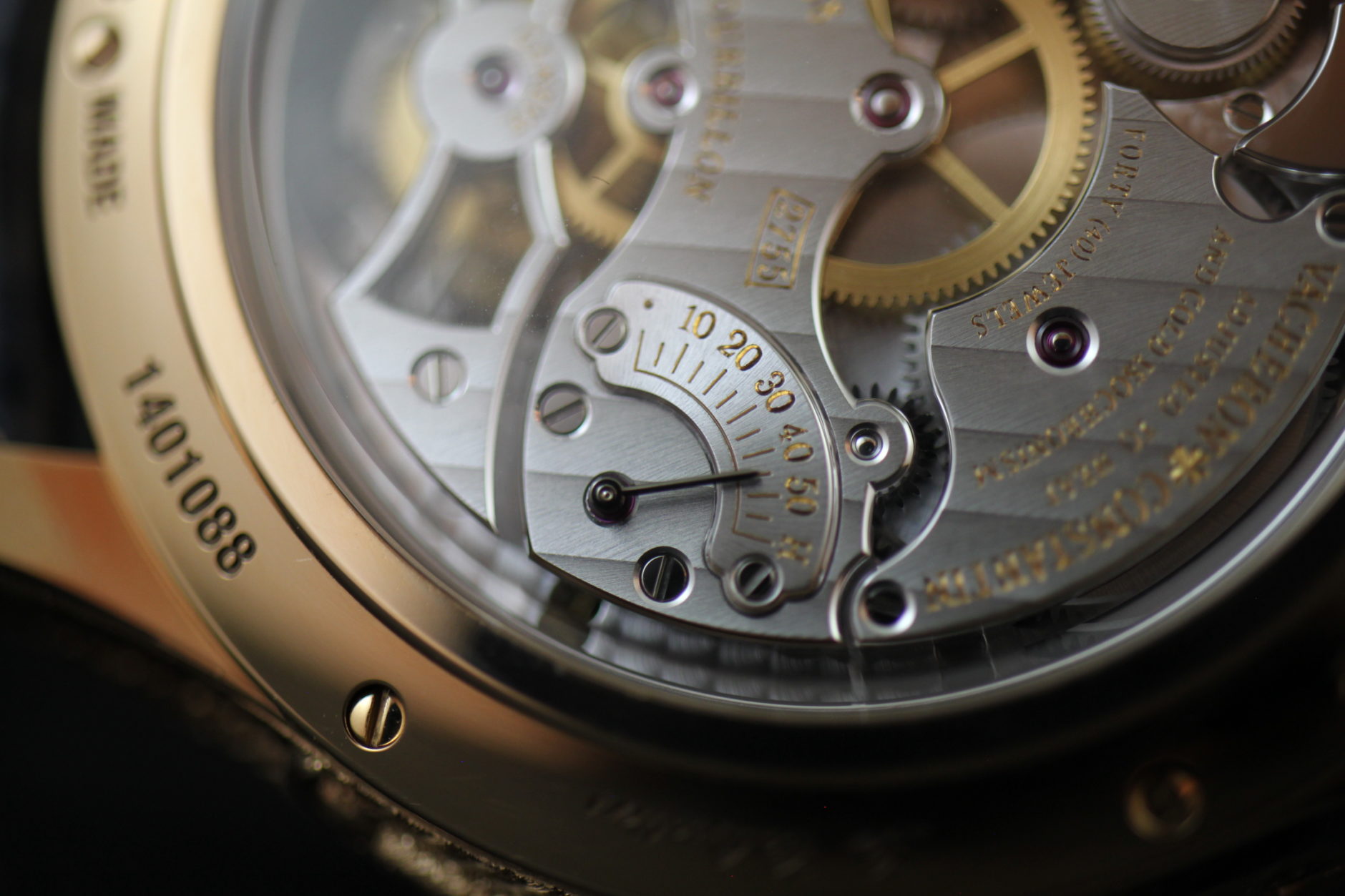 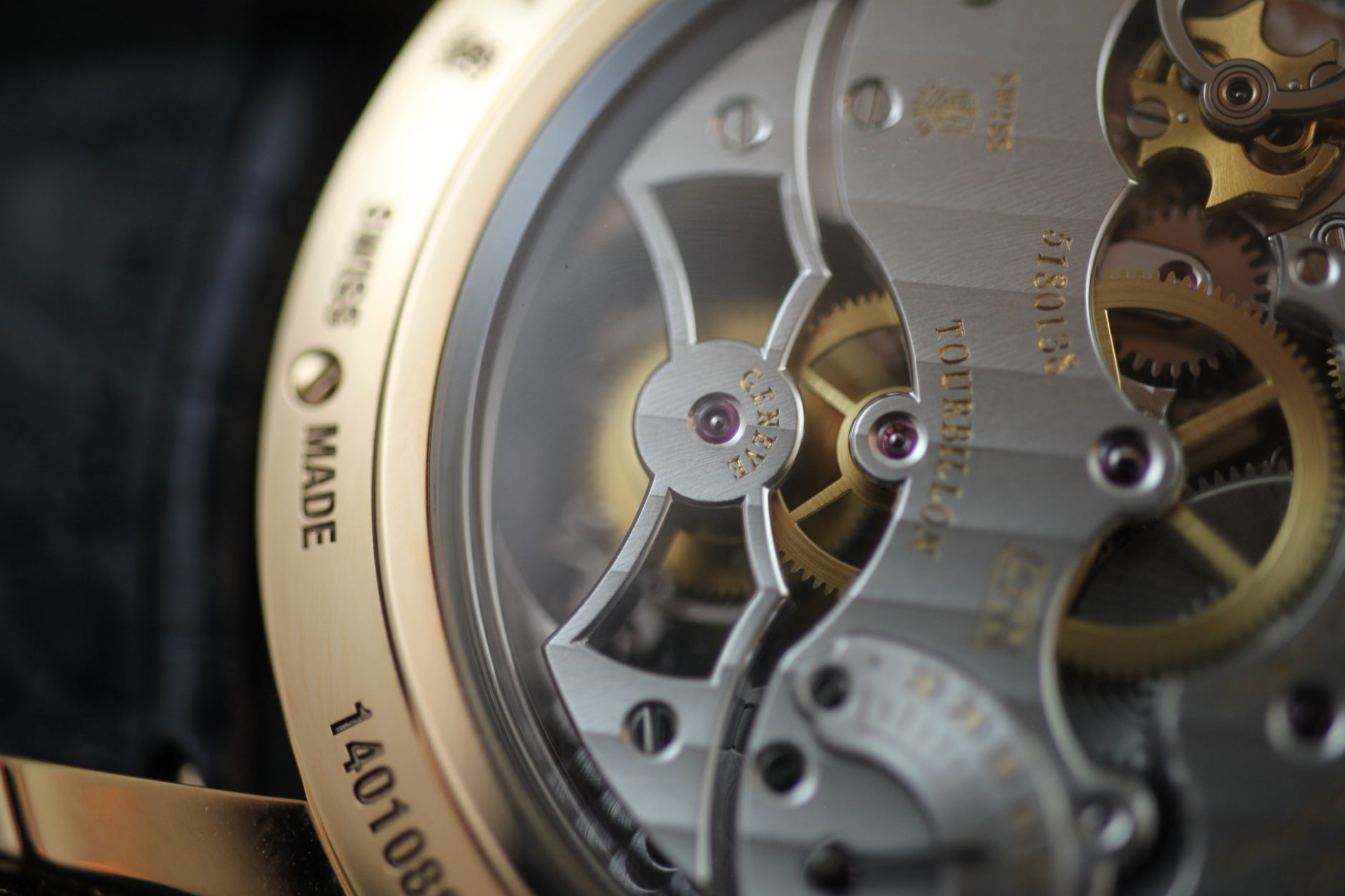 Take, for example, the first piece we were able to spend time with: The Calibre 2755 Eagle, a watch that combines a perpetual calendar, minute repeater and tourbillon with a slightly off-center blue dial enhanced by intricate guilloché. On both sides of the 45-mm, 18K 5N pink gold case is a hand-engraved eagle in mid-flight. Months, day, and date are handled by the subdials in the upper half of the dial, while the leap year is indicated by a small aperture placed between 1 and 2 o’clock. The minute repeater is equipped with a rare centripetal system that enables further sound diffusion for a more melodious striking sound. Hour and minutes are, of course, represented by the matching pink gold dauphine hands and small seconds can be found on the tourbillon carriage. The watch has a 55-hour power reserve with an indicator that is visible on the backside of the movement. 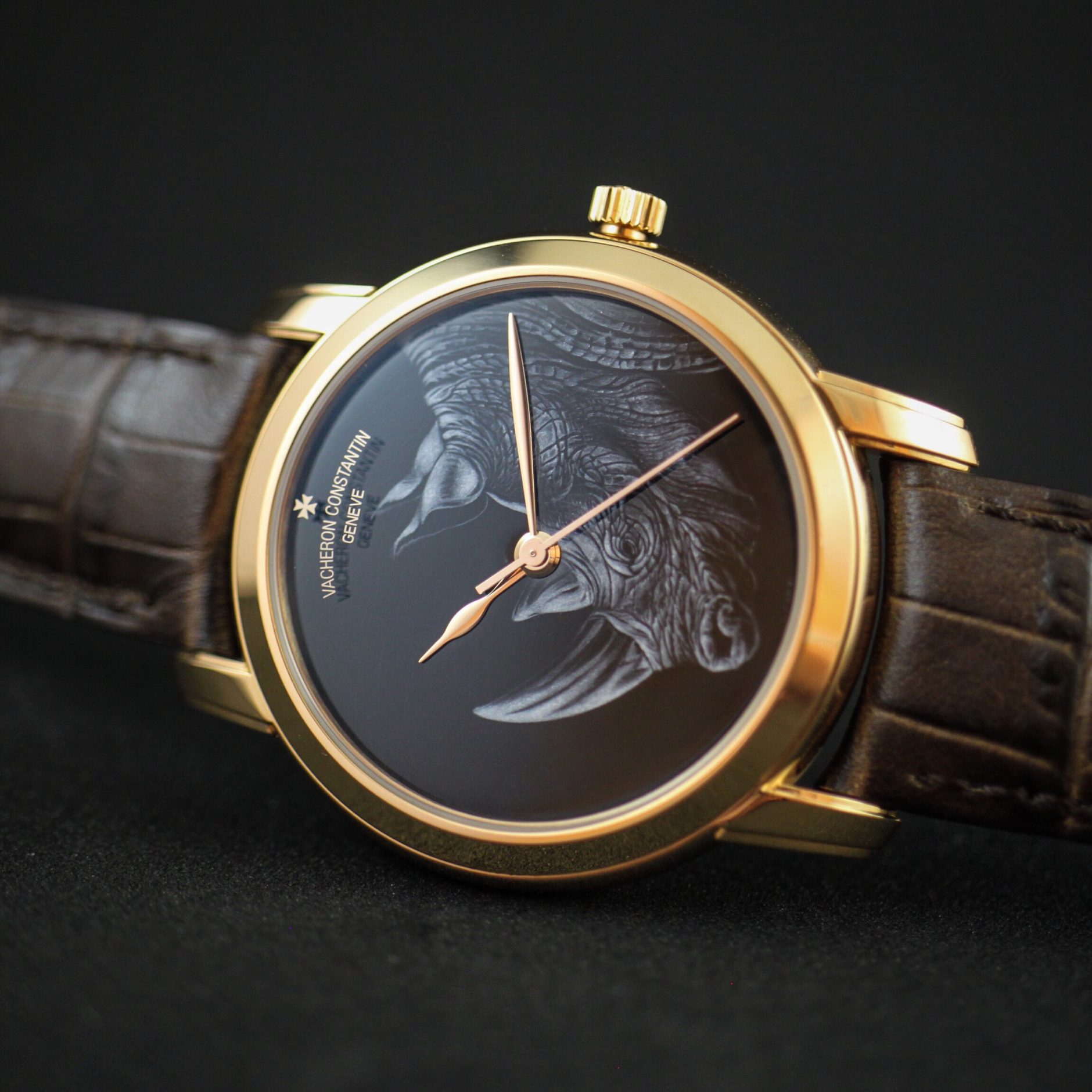 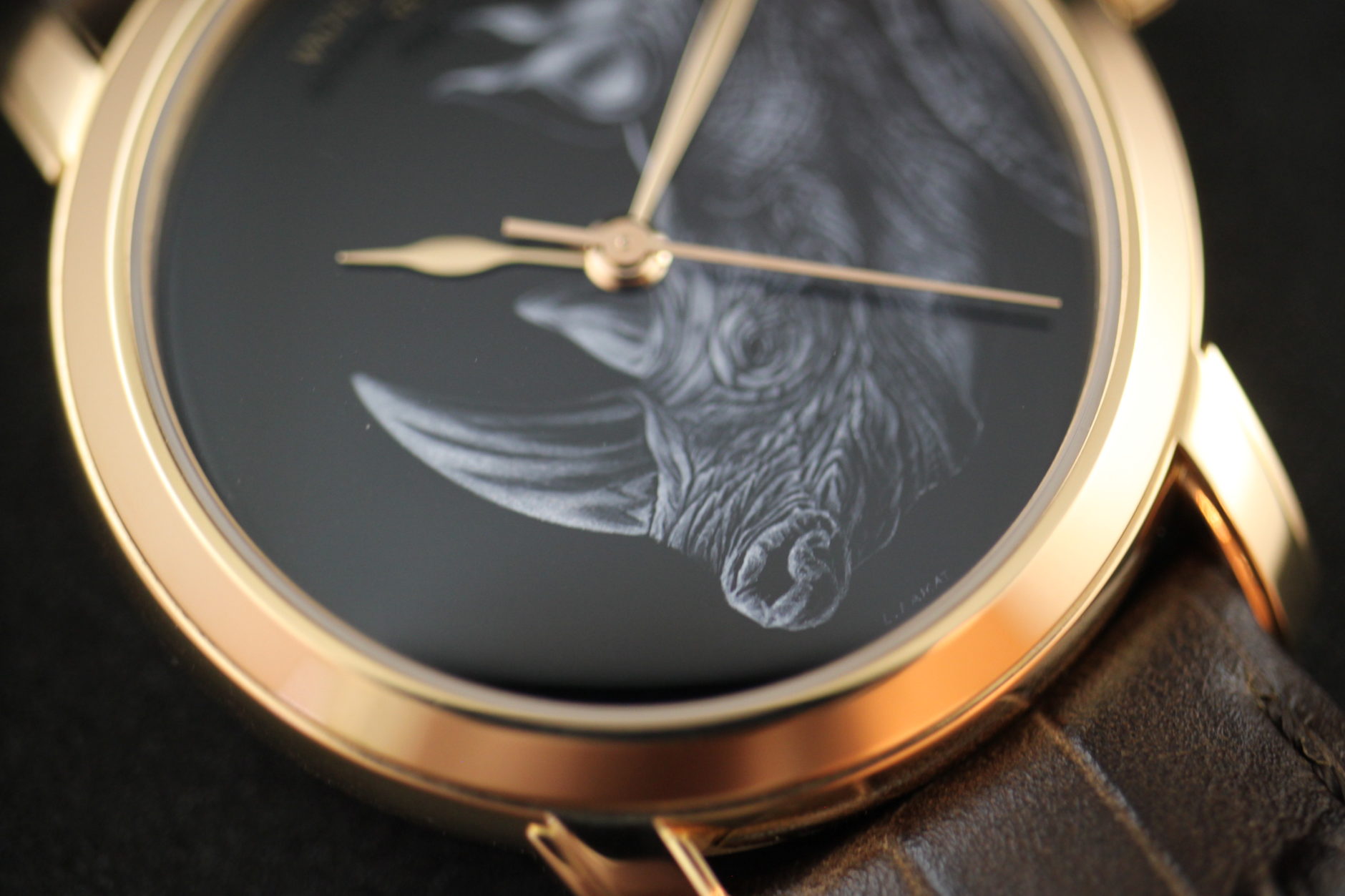 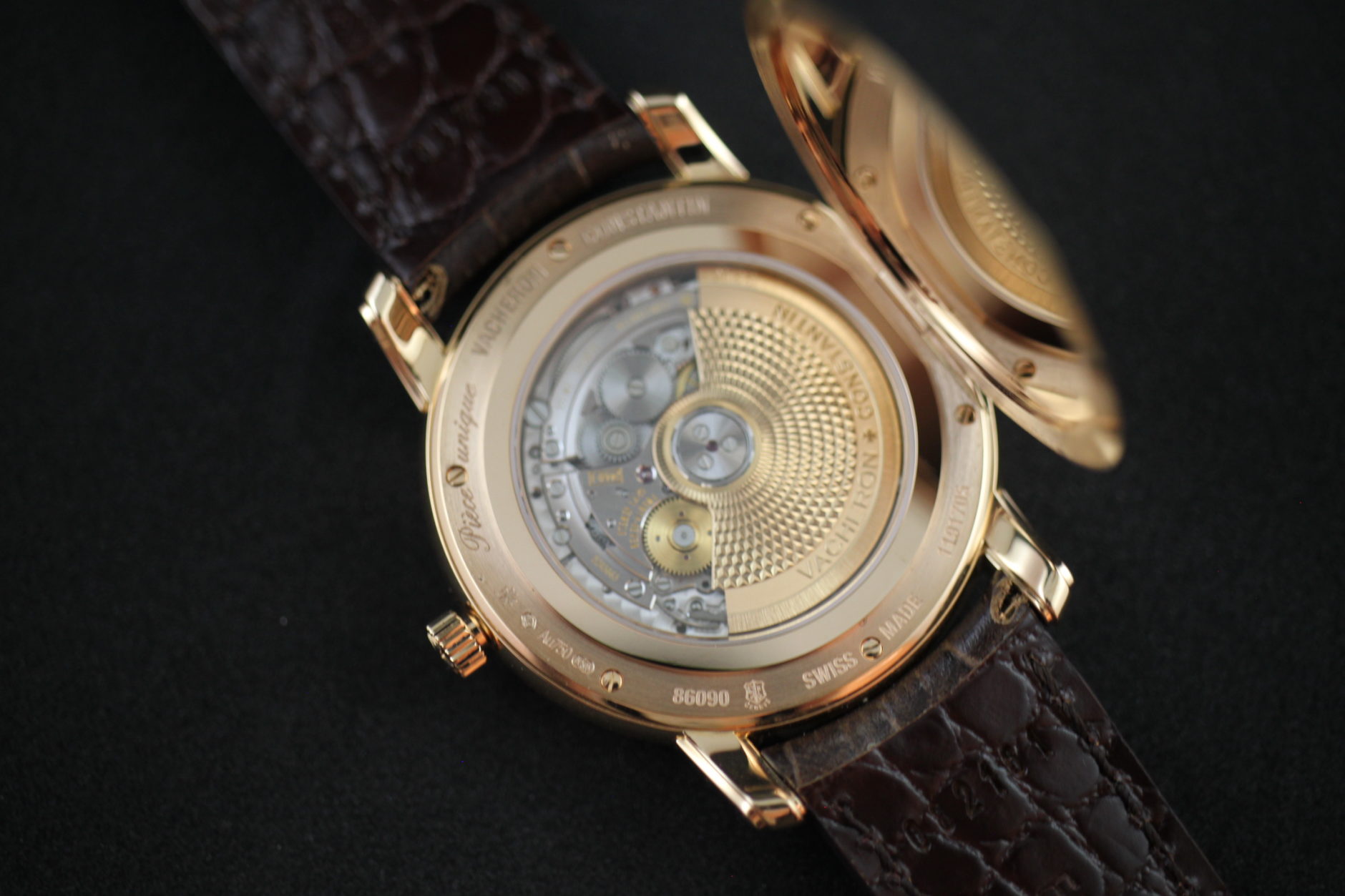 While all the watches within the Mécaniques Sauvages collection are completely one-of-a-kind, there is a small collection of unique pieces that all feature the art of grisaille enamel on their dial to display a variety of wild animals such as a falcon, a lynx, an elephant, and, the watch we photographed, a rhinoceros. Grisaille enamel is a centuries-old technique that allows for dramatic portraits of these animals in a monochromatic, gray-scale light. The six watches on display were the least complicated we saw while in Paris — with only hours, minutes, and central seconds to complement the 40-mm, pink gold case — but the depth and detail seen in these miniature paintings are the result of backbreaking effort that need to be seen in person to be fully appreciated. Vacheron told us that it takes a single artisan over a month to fully complete each dial. Finally, an officer-style caseback protects the movement and allows for further personalization like engraving. 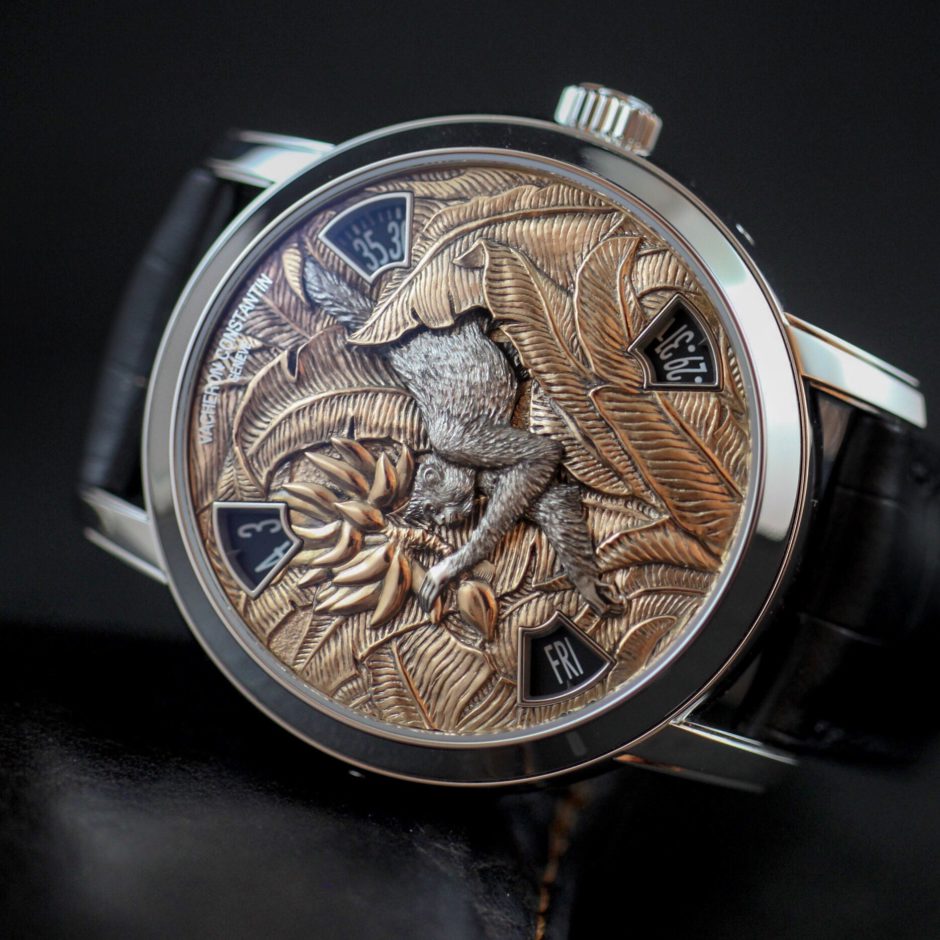 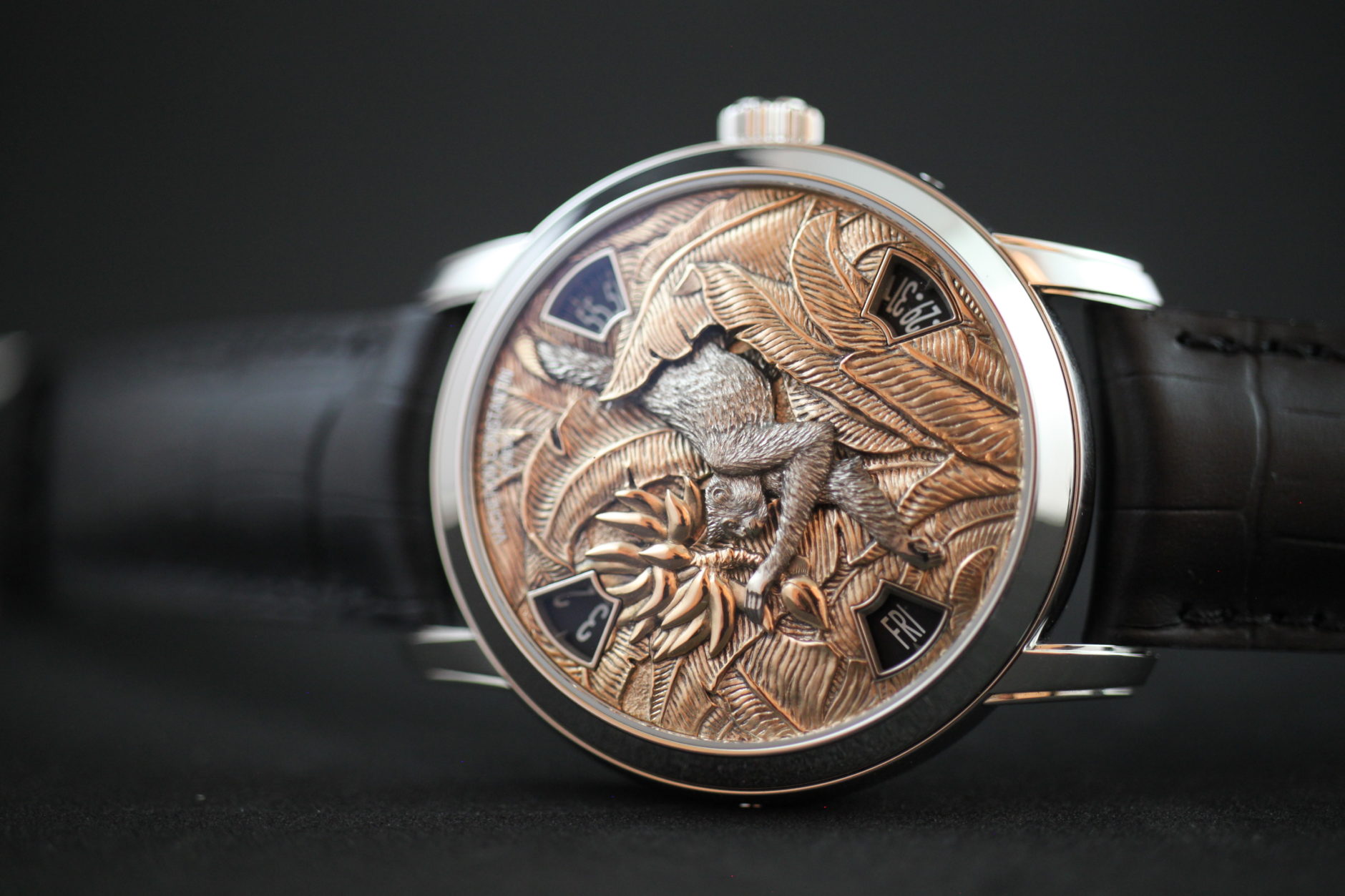 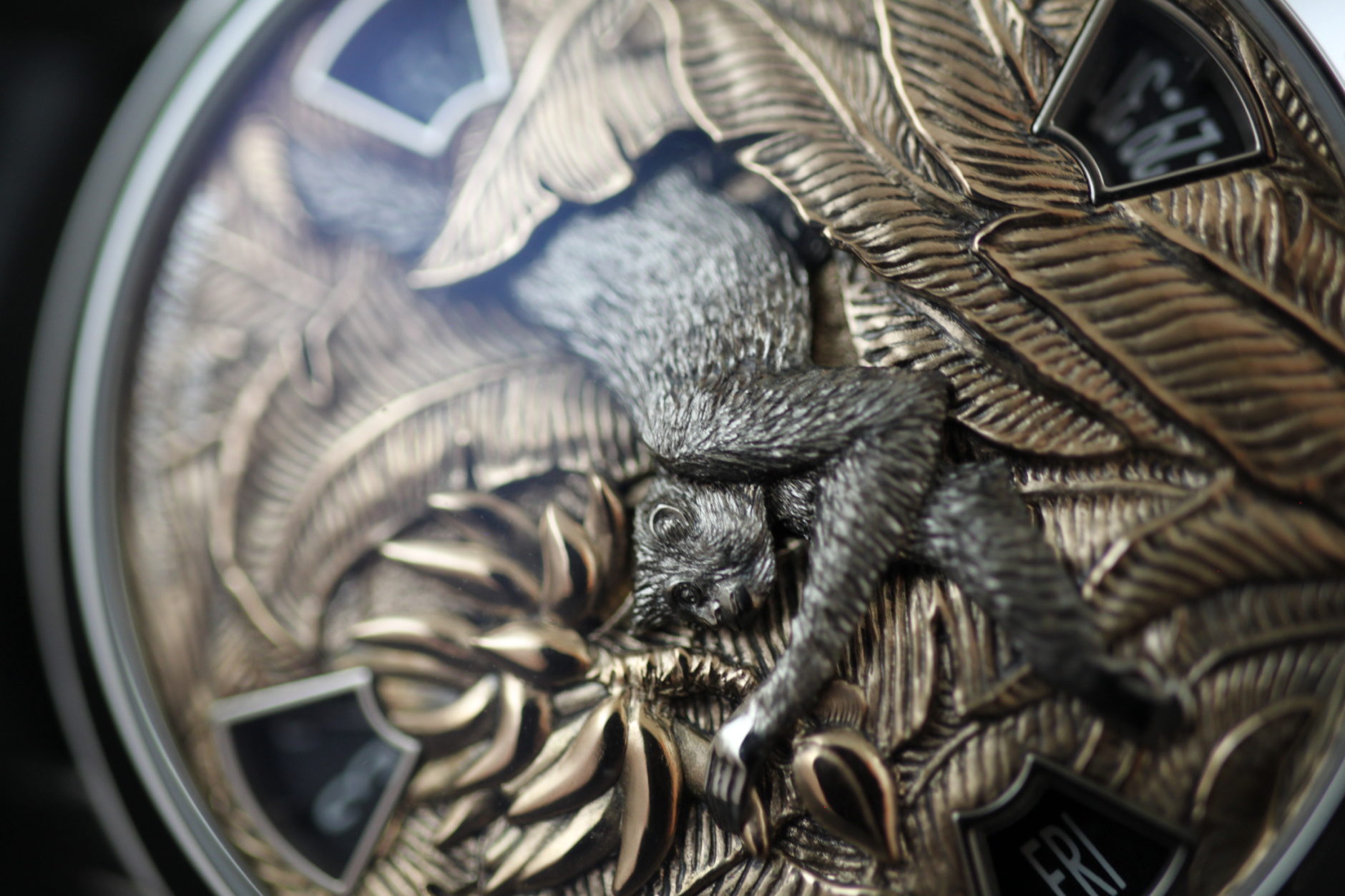 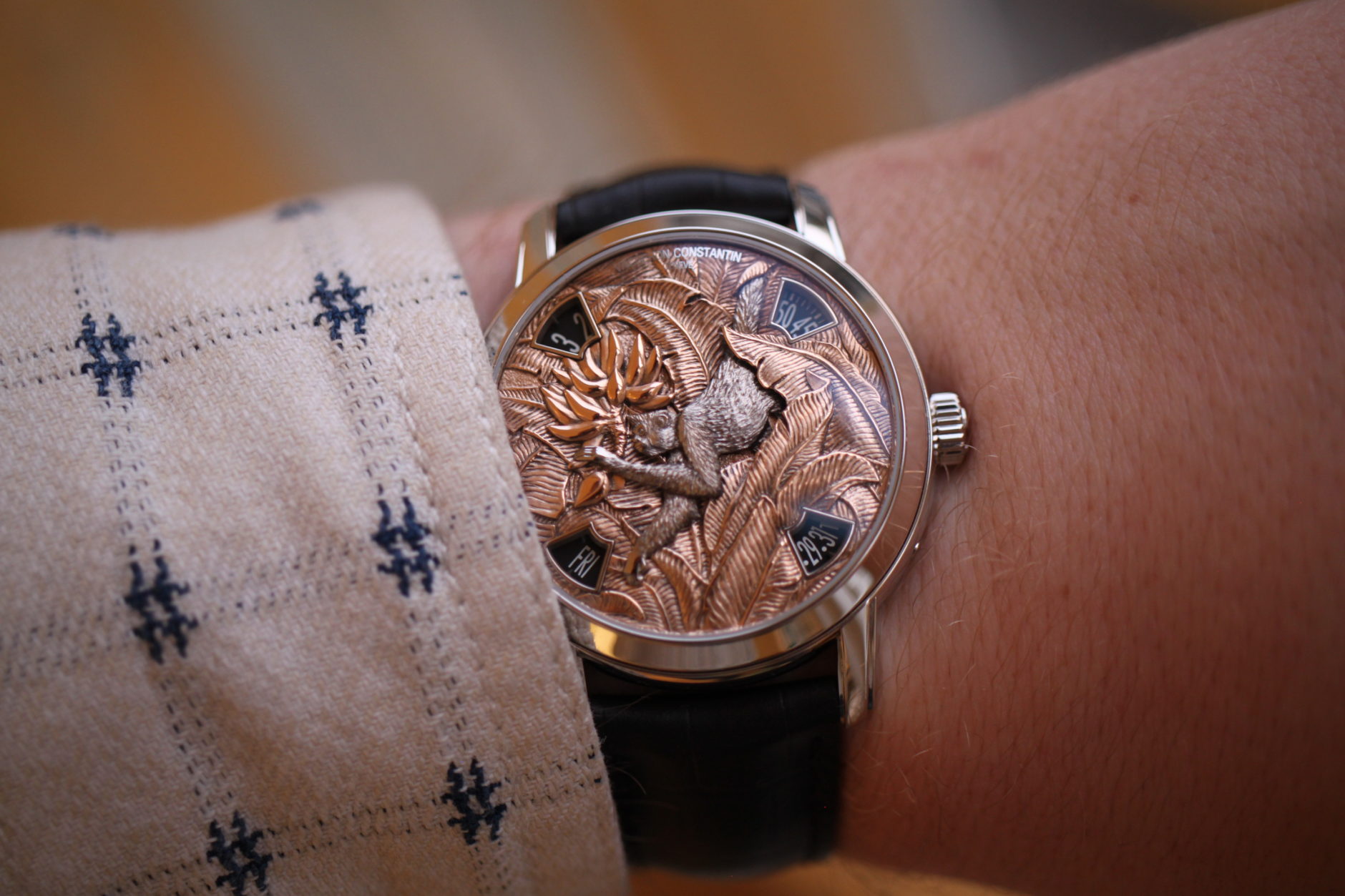 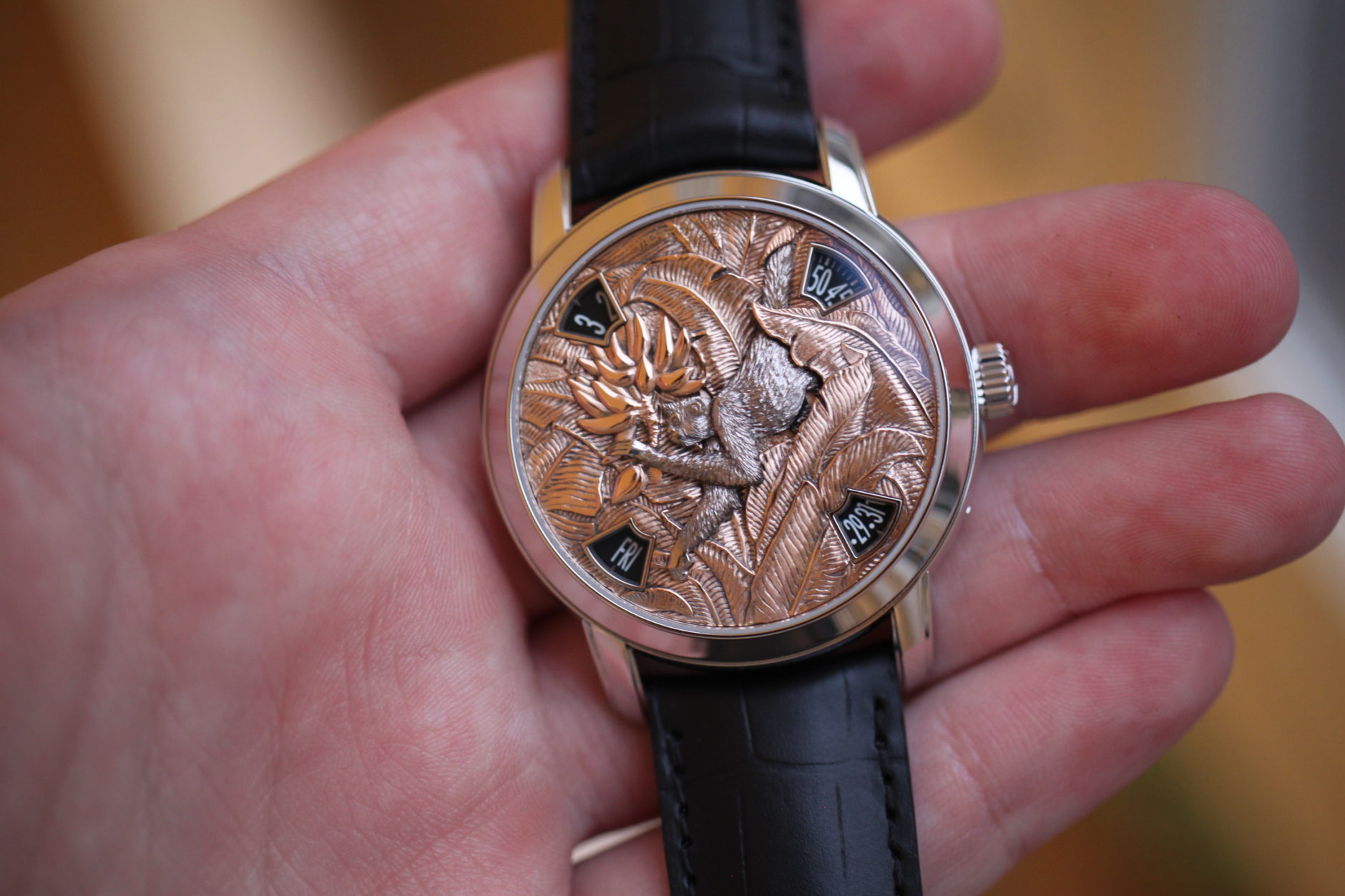 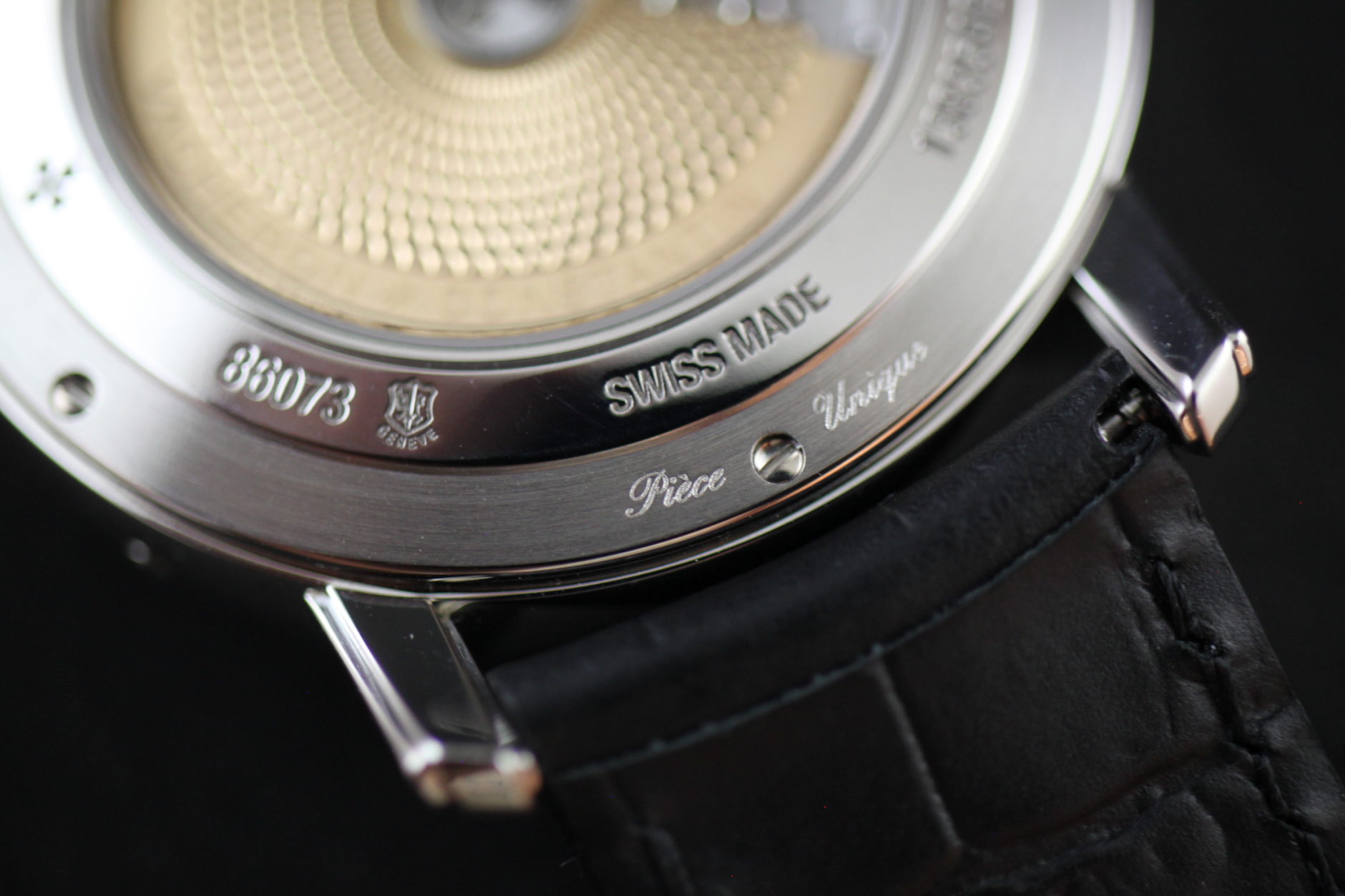 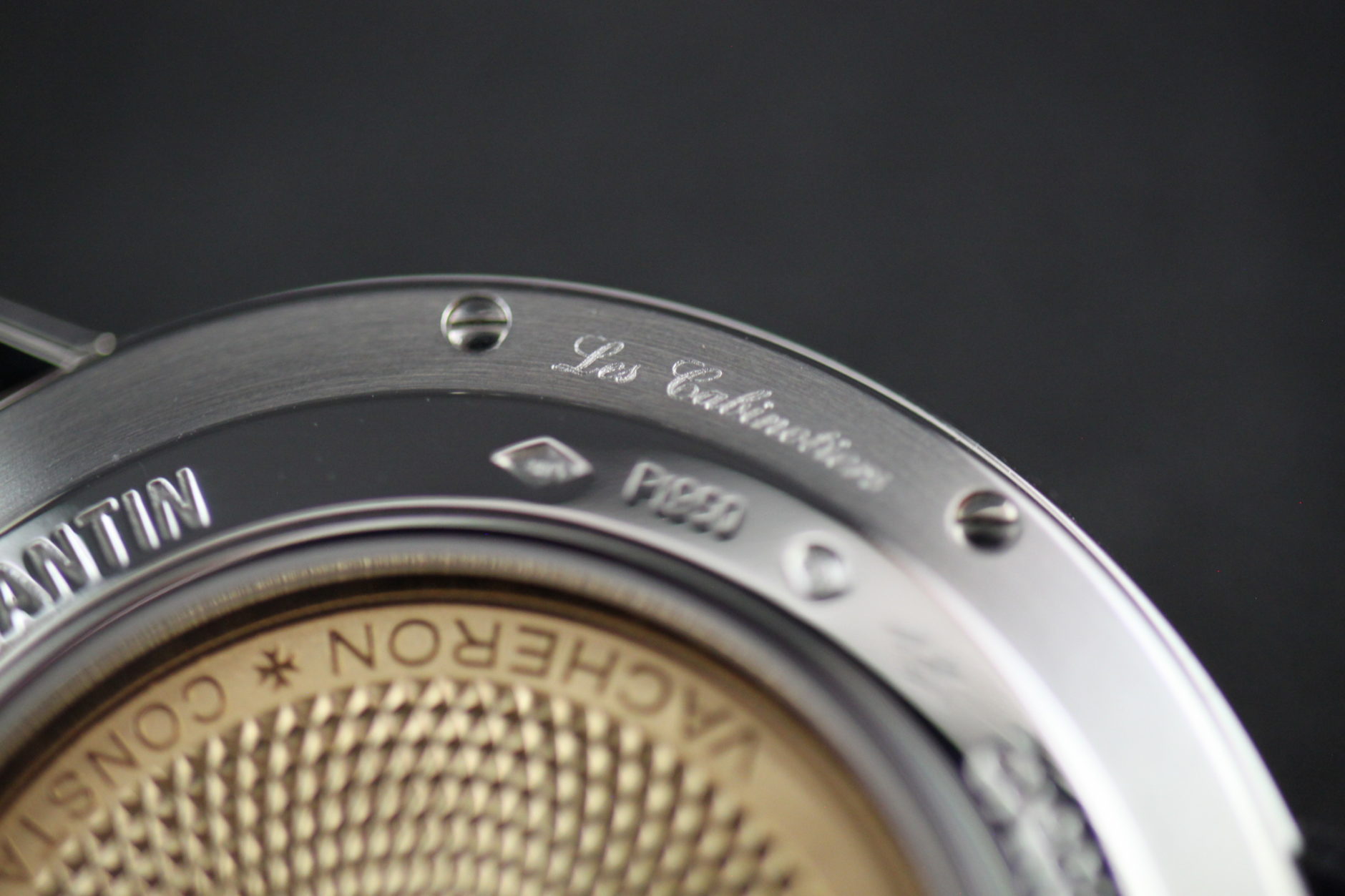 Vacheron continued the unique timekeeping display seen in the Métiers d’Art Les Aérostiers collection launched at SIHH 2018 with a number of watches highlighted by the Mysterious Animals Monkey. The dials of these watches combine hand-engraved, micro-sculpted gold depictions of animals concealed by the jungle. The Mysterious Animals Monkey depicts an ape swinging through the jungle to reach a cluster of bananas. The monkey is presented in 18K white gold while the surrounding leaves and fruit are sculpted from 18K yellow gold to complement the platinum case. Just like with the Métiers d’Art Les Aérostiers collection, the time indication is separated between four apertures found around the dial’s periphery, allowing for the focus to be put on the brand’s handcraft. Vacheron tells us that the technique of fine-line engraving seen on these models — which includes other jungle beasts such as a tiger and a parrot — requires at least five years of experience to master with the intaglio-type sculpting able to showcase detail in startingly realism. 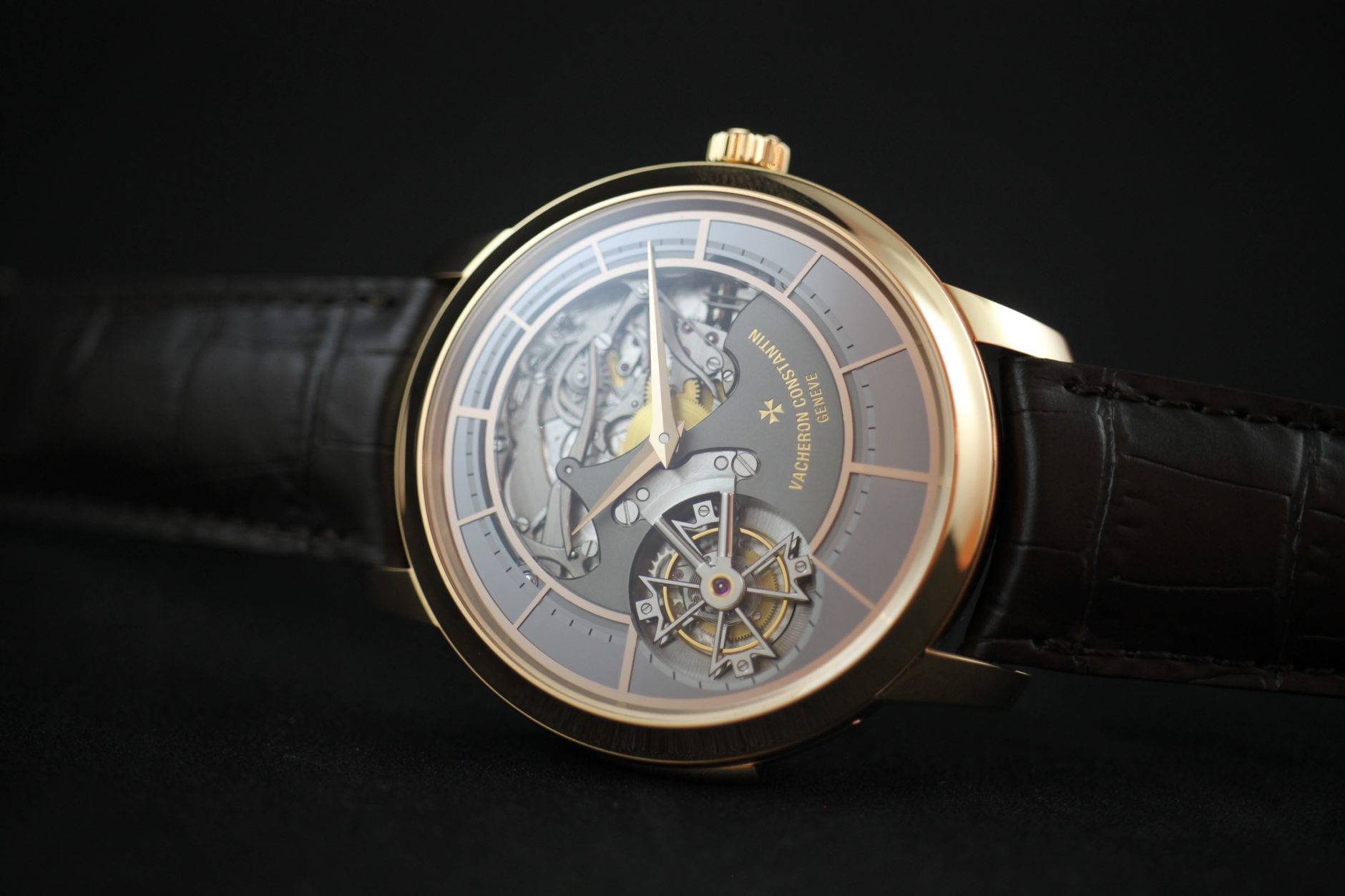 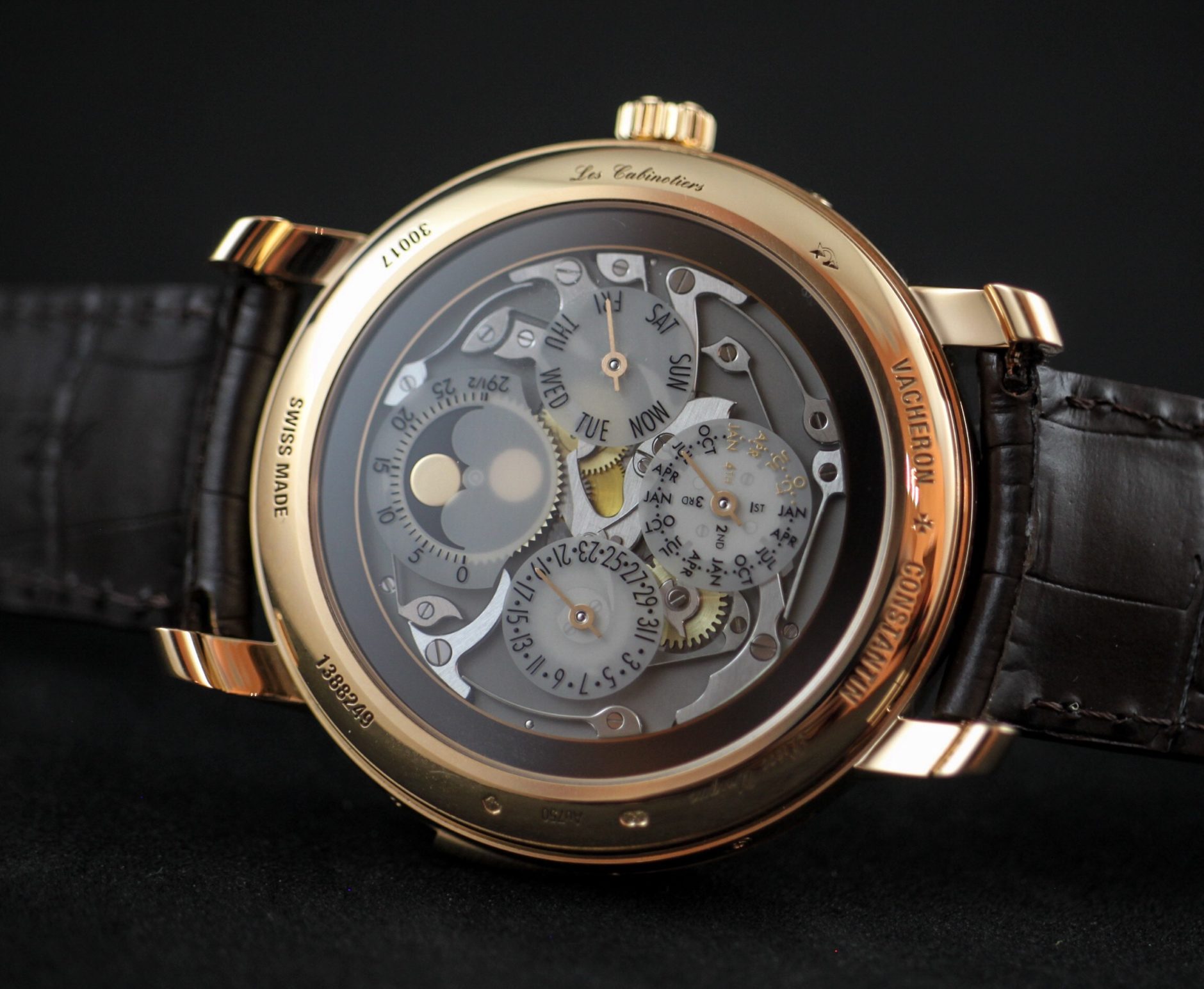 Arguably the most impressive new timepiece we saw in Paris (that we can talk about, that is) was a stunning Minute Repeater Tourbillon Perpetual Calendar. Encased within a 44.5 mm, 18K pink gold case, the watch separates its complications into two faces on the front and back of the watch. The front view of the slate-gray dial showcases the tourbillon and is segmented by the off-center minute track and hour indexes that lead to partial skeletonization on its upper right half side to expose the chiming mechanism. Flip the watch over for a view of the perpetual calendar on the watch’s translucent caseback. Also on display is a moon-phase indicator and the age of the moon.

The watches discussed in this article are truly just the tip of the iceberg for Vacheron’s Les Cabinotiers department. Other watches on view during our time with the brand in Paris included an Armillary Tourbillon (which we’ll cover more in-depth in the coming days) and a 14-day Tourbillon that uses a type of white Grand Feu enamel known as Blanc de Limoges (exclusive to Vacheron Constantin) on the dial to feature a majestic lion. Additionally, Vacheron allowed us to take a sneak peek at a few Les Cabinotiers unique pieces to be released next month at SIHH 2019, and, trust us, they’re worth the wait.

When we think of contemporary Vacheron Constantin, the first thing that comes to mind is perhaps the expansive Overseas collection with its popular and sporty mix of complications and materials, or maybe the new FiftySix line aimed at bringing in a new generation of enthusiasts with its accessible pricing. Even Vacheron’s recent focus on heritage releases has been incredibly successful, marked by the Historiques Triple Calendrier’s recent win at the GPHG 2018 for Best Revival, but the group of incredibly skilled Les Cabinotiers artisans is one of the brand’s crowning achievements, and is a testament to the marque’s technical and artistic ability and overall dedication to haute horologerie.

Keep an eye out for an in-depth report on the Les Cabinotiers department to appear in an upcoming print issue of WatchTime magazine.