Back in April, Vacheron Constantin unveiled a trio of Historiques American 1921 models in precious metal cases, commemorating the 100th anniversary of its inspiration, a vintage timepiece from the heyday of Art Deco. The release of those models, however, was just the prelude to an even more ambitious and historically significant tribute to the model’s centennial in 2021. Vacheron Constantin also undertook the herculean task of creating a faithful re-edition of the original timepiece, combining the expertise and exhaustive research capabilities of its Heritage department with the voluminous archives of historical tools, components, and machines at its Restoration workshop.

While the manufacture takes great pride in its ability to utilize these resources to trace any of its timepieces, from any era, to its production registers, and to delicately restore any such timepiece to its original state, it had never before striven to reproduce an antique watch entirely from scratch. The year-long project of creating the American 1921 Pièce Unique, with the mandate of reconstituting the 1921 reference down to its smallest details, started with reproducing parts on vintage machines and hand-crafting others with appropriate historical tools. Artisans used a late 19th-century lathe to cut elements of the case, a mid-19th-century topping tool to modify the teeth of wheels, an 18th-century drilling accessory to drill jewel settings into the mainplate, and an early-20th-century staking tool to drive in the jewels. Custom-made milling cutters and riveting tools duplicating those of the early 20th century enabled watchmakers to work in the same manner as their ancestors had.

Most challenging was undoubtedly the rebuilding, from scratch, of the vintage 11-ligne Caliber Nouveau that ticked in the 1921 model. Only one example of the American 1921, out of only 24 that were made, resides in Vacheron’s private collection, and the restorers had to disassemble its movement and carefully examine each part to learn which needed to be wholly re-created and which could be replaced from the vast stores of vintage blanks in the Restoration department. Each of the original caliber’s 115 parts had to be meticulously measured and sized, and restorers needed to obsess over minutiae such as the exact distances, heights, and colors of the wheels and how each component was to be adjusted and calibrated prior to assembly. The restorers, accustomed to replacing damaged jewels in existing settings, now also had to learn to make their own settings, as well as to replicate the patterns and engravings that adorned the original movement.

The case, matching the relatively dainty 31.5-mm diameter of the vintage piece, was entirely re-created using the same alloy (18k 3N yellow gold), its exact hue matched with the aid of spectrometer. The blanks for the crown and hands were drawn from the Restoration workshop archives, the latter hand-blued using the traditional production techniques of the era. The dial, crafted in grand feu enamel like its ancestor, hosts the same vintage Art Deco numerals as its inspiration from the early 20th century. Even the pin buckle that fastens the brown calf leather strap has been faithfully reproduced in the same yellow gold alloy. The only detail that distinguishes the modern piece from the original is the laser engraving on its caseback, added, says Vacheron, “for customs purposes.”

Vacheron calls the American 1921 Piece Unique (technically, Ref. 1921H/000J-B949) “emblematic of an era” and “a symbol of the Maison’s attachment to its heritage and to the continuous enrichment of traditional know-how.” Appropriately, it will make its public debut at Vacheron Constantin’s new, flagship boutique opening this summer in New York City before making a tour around the rest of the world.

END_OF_DOCUMENT_TOKEN_TO_BE_REPLACED

From Prototype to Production: Vacheron Constantin ...

END_OF_DOCUMENT_TOKEN_TO_BE_REPLACED 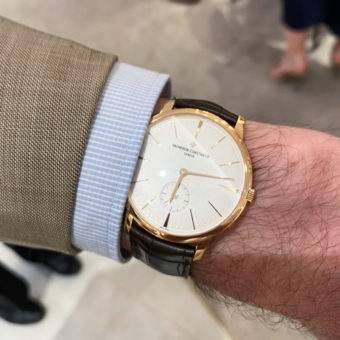