Created in 2001, the Grand Prix d’Horlogerie de Genève (GPHG) has
established itself as the most important award show in the industry. Here’s a look back at how the event started, the performance of the competing brands and, just as important, how much the event has evolved over the last two decades.

The Grand Prix d’Horlogerie de Genève was created in 2001 with the aim to “highlight and […] reward the most remarkable contemporary creations and promote the watchmaking art worldwide.” The founding members were the Canton of Geneva, the City of Geneva, the Musée international d’horlogerie in La Chaux-de-Fonds (MIH), the Geneva Laboratory of Watchmaking and Microtechnology (Timelab) and the Edipresse Group. Until 2019, watch brands were able to enter their most promising models in up to 14 categories, with a (comparatively small) fee per watch, and an additional, more substantial, fee for shortlisted watches that would later take part in the global traveling exhibition. Carine Maillard, Director of the GPHG, says, “The GPHG is a media showcase and a great promotional tool. The preselected watches are presented every year in autumn, during an exceptional exhibition, which travels the globe. Winning watches have significant visibility thanks to international media coverage. We keep registration fees low so all brands can participate.”

In other words, the GPHG is partially financed by the brands that choose to participate (the Republic and Canton of Geneva and the City of Geneva also provide financial support, together with sponsors), and until 2019, brands that didn’t want to compete simply weren’t represented at all, which explains why, for example, there is not a single watch from Rolex to be found among the previous winners. (Its sister brand Tudor, however, is a regular participant and first won an award in 2013 with the Heritage Black Bay.) To improve this situation, the GPHG has launched the “Academy of the Grand Prix d’Horlogerie de Genève.” With this move, the GPHG “is affirming its commitment to openness and innovation by announcing the creation of an international watch industry Academy, operational as of May 2020.”

The group is composed of “several hundred members” from the industry, including brand representatives, and each member is responsible for proposing one to 12 watches in at least eight of the 14 categories of the upcoming 2020 edition. At the same time, brands will still be able to enter watches directly and will even be able to validate all entries. In theory, this means that the 350 members of the academy should generate at least 2,800 additional entries for the 2020 edition, most likely with a fair amount of identical watches among them. While the pool of entries should substantially grow with this new setup, the deciding body is still relatively small. The final jury selecting the award winners will consist of 30 members from the academy, but almost half of them will be randomly selected. This jury will meet in Geneva, behind closed doors, and under notarial supervision, to evaluate the preselected watches in person and proceed to the final vote by secret ballot. Hopefully, this new concept will allow for an even more transparent, independent and representative look at the industry. Speaking of transparency, WatchTime joined the GPHG as a media partner in 2019 and is also represented directly and indirectly in the academy: yours truly, Rüdiger Bucher (Editor-in-Chief of WatchTime’s sister-publication Chronos) and Jeffrey Kingston (longtime collector and close friend and event partner of WatchTime) are members of said academy. You will also find New Jersey-based Roberta Naas on the list. She’s a regular freelance contributor to WatchTime.

The GPHG obviously is neither the first nor the only award for watches. In Germany, for example, the Goldene Unruh (“Golden Balance” in English) has been operating since 1998. For this year’s edition, almost 10,000 end-consumers selected the “best watches of the world” among 243 entries. The GEM Awards, presented by Jewelers of America, has been honoring “the achievements of individuals and companies whose work raises the visibility of fine jewelry and watches” since 2001, similar to MIH’s 1993-launched “Prix Gaïa” in Switzerland. Special-interest publications like Polish CH24.pl have been searching for the “Watch of the Year” since 2010, as does Revolution magazine, and Robb Report with its “Best of the Best” award, to name just a few. Additionally, design competitions like the iF Product Design Award and the Red Dot quite often include a watch category. In comparison, the GPHG has managed best to set the gold standard in the watch industry, mostly thanks to its international setup and constantly growing reach. As a result, the GPHG is now often described as the “Oscars of the Watchmaking Industry,” despite heavyweights like Rolex, Omega and Patek Philippe, for example, not having participated in last year’s edition. On the other hand, despite the “Geneva” in its name, brands from other Swiss regions, Germany and even Japan regularly participate. In 2019, among 196 entries, 84 watches were shortlisted, 18 (including the “Aiguille d’Or” award) ended up with a trophy in November, and two of them (Kudoke and Seiko) were produced outside of Switzerland. The five participating brands with the most shortlists in 2019 were (in alphabetical order) Audemars Piguet (4), Bulgari (5), Hermès (4), Ulysse Nardin (4) and Zenith (5); the most dominant category was “Men’s Complication” with 23 entries. Last year’s “Special Jury Prize” went to Luc Pettavino, Founder of Only Watch (which auctioned off the record-breaking Patek Philippe Grandmaster Chime in steel for CHF 31,000,000 two days later, on Nov. 9, 2019).

Best in Show
The first watch brand ever to win the prestigious “Aiguille D’or” Grand Prix (“Golden Hand” in English) at the inaugural award ceremony of the GPHG in 2001 was Vacheron Constantin with the Lady Kalla (Ref. 17701/701G-7393), a women’s watch covered with more than 120 white emerald-cut diamonds. The same watch also won in the “Jewelry Watch” category that year, which meant that the Geneva-based brand won in two of a total of seven categories. Winner in the category “Complicated Watches” in 2001 was Audemars Piguet with the Répétition Minute par Carillon Edward Piguet (Ref. 25935PT). Patek Philippe won in the category “Poinçon de Genève” (Geneva seal) with the ultra-thin Calatrava (Ref. 5120), and Gucci with the “Réveils de voyage” alarm clock in the “Pendulette” (table clock) category. Blancpain’s Chronograph Pastel Flyback (Ref. 2385F-192GC-52) won the “Ladies’ Watch” award; the “Men’s Watch” award went to the Leroy Osmior Chronograph. That was it. Fast forward to the last award ceremony in 2019, and the number of categories went from seven to 18, with Audemars Piguet winning the “Aiguille D’or” Grand Prix with the Royal Oak self-winding Perpetual Calendar Ultra-Thin (Ref. 26586IP.OO.1240IP.01).

As with most award shows, the entries that didn’t win usually cause as much stir as the ones that ended up winning. Using a comparatively small specialist jury, an award like the GPHG is not necessarily about identifying the commercially most successful watch, or models particularly popular among end-consumers. Still, looking back at the winners of the last 20 years, there’s almost never a brand that wouldn’t have deserved the award in retrospect, but obviously many more that would have deserved one as well. Therefore, in order to create more chances (or, depending on your viewpoint, incentives) for the brands entering, the organizer constantly added or renamed categories over the years. In its second year, for example, the GPHG saw the introduction of the “Special Jury Award” (which went to F.P. Journe for the Octa Calendrier), the “Pendulette” category was replaced with a “Design Watch” category, and two public awards were added (last handed out to Czapek Genève for the 33 bis Quai des Bergues in 2016). In 2003, the “Sports Watch” category was added and renamed in 2019 as the “Dive Watch” category. In short, only three categories remained untouched over the existence of the entire award show: “Men’s Watches,” “Women’s Watches” and the “Aiguille D’or” Grand Prix.

Summarizing the last 19 editions of the GPHG, F.P. Journe has won the “Aiguille D’or” Grand Prix a record three times (2004, 2006 and 2008), followed by Vacheron Constantin (2001 and 2005), Greubel Forsey (2010 and 2015) and Patek Philippe (2002 and 2003) with two grand prizes each. Richard Mille (2007), A. Lange & Söhne (2009), De Bethune (2011), TAG Heuer (2012), Girard-Perregaux (2013), Breguet (2014), Ferdinand Berthoud (2015), Chopard (2016), Bovet (2018) and Audemars Piguet (2019) all have won once, indicating the jury’s preference for haute horlogerie when it comes to handing out a Grand Prix. Audemars Piguet also happens to be the brand with the most trophies in total: the Swiss watch manufacture has won the incredible number of 13 category awards, and since 2019, one Grand Prix. Vacheron Constantin (eight awards and two Grand Prix), TAG Heuer (eight awards and one Grand Prix), and Piaget (nine awards) come next. Perhaps most impressive in this list is Kari Voutilainen’s track record at the GPHG. Voutilainen, one of the best-known and best-regarded names on the independent-watchmaker scene, with an annual production between 25 and 55 watches, has won seven times, which puts him on a par with brands like Zenith and Van Cleef & Arpels. Voutilainen has even managed to win the “Men’s Watch” category four times (2007, 2013, 2015 and 2019), followed by F.P. Journe with two trophies in the same category (2003 and 2005). The “Women’s Watch” category has been dominated by Chanel with four trophies (2012, 2017, 2018 and 2019), followed by Piaget with three trophies (2008, 2009 and 2016). Voutilainen said, “Participation helps to get you known and gives you certainly more credibility. If someone wins, this might help sales; at least it won’t get worse. It is also the only independent competition without any commercial interest.”

A Launchpad for Brands and New Releases
Thanks to its growing influence and reach, the GPHG has also become an attractive platform for newcomer brands and product launches. Ulysse Nardin, for example, chose the award show to first introduce its latest dive watch model in 2018. For a newcomer brand like Singapore-based Ming (the watches are assembled, regulated and tested in Switzerland, final quality control is done in Malaysia) the decision to enter paid off in 2019, only two years after the brand’s debut. The 17.06 Copper won the “Horological Revelation Award.” Dr. Magnus Bosse, Co-founder of Horologer Ming, commented, “It’s nice to have the visibility and recognition for our work, plus it’s opened doors for us within the industry. It also fulfills a longstanding dream for the team to share the stage with our heroes — that was a night none of us will ever forget!” Next to the media coverage of the exhibitions, award ceremony and winning pieces, all watches that are shortlisted are presented every year in autumn, during a road show, which travels the globe. (Last year it went to Sydney, Bangkok, Mexico City, Puebla, Geneva and Dubai.)

One thing is certain: it’s in the nature of almost every award show that some decisions will always be seen as controversial by those not involved in the jury process. However, the Grand Prix d’Horlogerie de Genève has shown to be an agile player, willing to be as inclusive as possible with the newly launched academy. And by constantly adapting and evolving its concept, it has truly become a global platform to showcase the creativity and ingenuity of the entire industry — an essential role in a world without a format like Baselworld.

No Responses to “The Watchmakers’ Award: How the Grand Prix d’Horlogerie de Genève Became the Industry’s Gold Standard”

END_OF_DOCUMENT_TOKEN_TO_BE_REPLACED 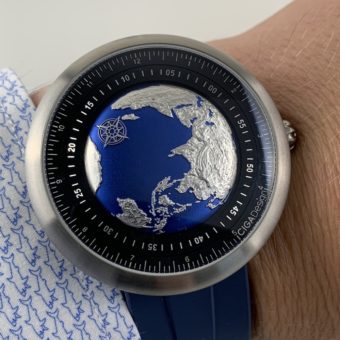