This is the time of year when market analysts release holiday shopping forecasts. Come along as we take a look at three important reports released recently. One focuses on global consumer confidence, one on the state of the USA retail trade, and one on retailer holiday plans. Sprinkle in comments from a leading watch brand CEO on the state of the economy and how his brand has been affected, and the future comes into focus.

The Nielsen Global Consumer Confidence Survey highlights the economic pessimism prevalent among American consumers The survey polled 14,029 online consumers in 28 countries. Overall, 71 percent of respondents thought their country was in recession. This reflects a decline of six points from a high of 77 percent when the survey ran in March 2009. In this age of lowered expectations, this is viewed as good news. Compare this however with 93 percent of Americans who say they are still in a recession. Americans are also twice as worried about debt when compared with the rest of the world.

These concerns have translated into widespread spending reductions: 76 percent of North American consumers said they have reduced spending and implemented cost-cutting measures. While the study showed that few consumers plan to continue their cost-cutting ways long-term, many experts believe that optimism and increased spending will return to North America more slowly than in other parts of the world.

The BRIC countries (Brazil, Russia, India and China) and Asian markets recorded the largest jumps in Consumer Confidence Indices in the past three months. Consumer confidence in India jumped 13 Index points, and climbed 9 points in Japan, South Korea, Hong Kong and Indonesia. Consumer confidence was up 8 Index points in Taiwan and Brazil, and 7 points in Singapore, Turkey, Russia, Philippines and the UK. The USA and New Zealand did not share this optimism, holding flat in the second quarter. Germany was the only country to register a decline of one Index point, but more recent indicators point to Germany and France entering the early stages of economic recovery.

The National Jewelers Holiday/Q4 Inventory and Marketing Survey finds a generally pessimistic mood among USA jewelry retailers when it comes to the 2009 holiday season. A full 86 percent of the participating jewelers said that overall inventory for the fourth quarter will be the same size or smaller than 2008, which was not exactly a banner selling season. Spending on marketing will also decline in the fourth quarter, with 82 percent of participating retailers reporting they will spend the same or less on marketing as last year. The largest percentage of respondents this year (30 percent) said they will be spending significantly less on marketing. This is up from only 11 percent who planned a major reduction in 2008. Another 27 percent said they plan spending slightly less on marketing than in 2008, and about a quarter of the respondents said they will spend the same as last year.

In terms of how marketing dollars are being spent, retailers’ favorite method for reaching potential customers is direct mail. Print advertising is next (20 percent), followed by a tie between radio and online/e-mail (10 percent each). The percentage of retailers who find web advertising to be effective doubled from 2008 to 2009, but only 1% of the respondents rate social networks and blogs to be the most effective way to reach potential customers.

When asked which products they will market most heavily this holiday season, watches finished well down the list. Diamond jewelry finished on top with 29 percent. Loose diamonds and custom work came in at 10 percent, followed by bridal jewelry and designer and/or jewelry brands at 9 percent each. Colored-gemstone jewelry and sterling silver and other low-priced items will be the main focus for 8 percent, while 4 percent plan to promote private-label jewelry. Watches finished next to last at just 2 percent, beating out specific diamond programs such as Three Stone, which came in at 1 percent.

The grim news continued, especially for brick-and-mortar retailers, in Grant Thornton’s Reviving Retail: Strategies for Growth in 2009. The report found that 10,000 USA retailers of all types will close their doors in 2009. Beyond the obvious impacts of the economic downturn, the report cited the growing popularity of online shopping as a major causal factor. The report points to 2008 sales, where a handful of online companies such as Zappos.com showed strong sales growth, even in a severely restricted economic environment. Product categories that were hard hit 2008 did better online. For example, jewelry and watch sales declined 34 percent overall, but only 24 percent online. Apparel sales were off 19 percent overall, but only 4 percent online.

Our final data point comes from an interview given by IWC CEO Georges Kern that was published in German in the August 25 online edition of Handleszeitung. Kern indicated that while IWC’s U.S. sales have declined, as they have for all luxury brands, overall IWC sales have performed better than the industry average, which saw exports plummet by 25.9% in July. IWC was helped by strong performance in the China, Hong Kong and Macao markets. Kern said that IWC is performing better than was projected a few months ago.

Asked if IWC will have to scale back production, Kern said that will not be necessary, as the company stayed reasonable and did not build up excess capacity during the boom years.

Taking a closer look at how the economic crisis has affected buying habits and trends, Kern said the market has seen an end to impulse purchases by bonus-spending executives. Today, purchasing decisions take longer. When they decide to buy, consumers are opting for “modest elegance”, as watches “with lots of gold or platinum” are less in demand today. Consumers remain loyal to the brand, however they tend to buy lower-priced models. Rather than platinum, steel is the choice today. Kern said that these days, a watch should not be pretentious, as that can be counterproductive, for example in a meeting with business partners.

Looking at the retail landscape, Kern said there is hope for improvement, however IWC remains cautious and certainly there is no reason for euphoria. There are signs of stabilization, and IWC hopes to weather the crisis with only a few bruises.

Asked about the luxury watch industry, Kern sees a chance for further consolidation. The number of brands will decline as those with little content disappear. IWC on the other hand is taking bold steps to prepare for the future, for example investing in Asia (and especially China). A recently-opened flagship boutique in Hong Kong points the way to the future, as strong brands continue to invest even during trying economic times. The flagship boutique model may be repeated in other markets, such as Switzerland, the USA and Dubai.

No Responses to “Snapshots From a Recession”

END_OF_DOCUMENT_TOKEN_TO_BE_REPLACED 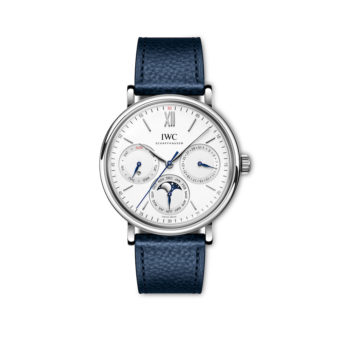