Part of the fun of following Longines’s timing partnership with equestrian sports and events like the Kentucky Derby, Breeder’s Cup, and Belmont Stakes is guessing which timepiece from the Swiss brand’s timepiece collection will be elected as Official Watch of each event. In the spirit and style of horse race betting (Win, Place, Show = 1st place finisher, 2nd place, 3rd place, respectively), here’s my assessment of the top three watches that made their presence felt at last weekend’s Belmont Stakes, the third jewel of thoroughbred racing’s Triple Crown, which I attended with Longines, the official timekeeper. We’ll count up from “Show” to “Win,” the latter being the actual watch chosen as Official Watch of the 151st Belmont Stakes.

This watch makes the list as an Official Watch contender because of its previous first-place finish as Official Watch of the Kentucky Derby. The steel case measures either 42 mm or 44 mm in diameter, based on the reference, and is water-resistant to 50 meters. The chronograph dial has a tricompax layout with a 30-minute counter at 3 o’clock, a 12-hour counter at 9 o’clock, and a 60-second counter at 6 o’clock. The ultra-high-frequency quartz movement, Caliber L289.2, is notable for its very high degree of precision for an analog watch (± 5 seconds per year) and its use of a so-called GPD (gear position detection) system that quickly resets the watch’s hands after an impact or exposure to a magnetic field. Longines has also equipped the movement with an exceptionally long battery life of nearly five years — which, the brand points out, gives this watch an advantage over its “connected” sports-watch competitors, which require regular battery recharging, as well as a built-in perpetual calendar. Each model incorporates an “intelligent” crown to set and change the time and date, and an E.O.L. (end of life) indicator to signal to the owner when the battery is nearing the end of its life: when the energy in the battery ebbs, the seconds hand warns the owner by jumping in five-second rather than one-second increments. Much like the surprising and controversial Derby winner, Country House, the Conquest VHP won the day at the Derby but was unable to repeat its first-place finish at the Belmont.

The watch that I wore to the Belmont Stakes, which galloped into the U.S. market this summer after its unveiling at the CoutureTime watch exhibition in Las Vegas in 2018, made such an impression on my fellow watch fans and racing enthusiasts at the Longines VIP suite that I must award it the second-place finish. This handsome “gray mare” — with a sleek ceramic insert in the diving-influenced unidirectional ratcheting bezel to match the color of the gray sunray dial — is one of three recently launched models in the sporty HydroConquest line, each bearing a scratch-resistant ceramic bezel insert and color-coordinated dial (the others are in black and blue). The round, brushed stainless steel case measures a substantial 43 mm in diameter (a 41-mm version is also available) and is water-resistant to 300 meters thanks to a screw-down crown. Inside the case is a thoroughbred movement, the self-winding Caliber L888.2, whose sire is the ETA A31.L01, with 21 jewels, a 28,800-vph frequency, and a power reserve of 54 hours. The large-link metal bracelet with brushed and polished finishes completes the picture nicely and also wears very snugly and securely on the wrist. I expect this watch to contend for Official Watch in many races to come.

And the winner and Official Watch of the Belmont Stakes is a filly! This new ladies’ piece qualified for the field just in time to compete at Belmont, making her debut the previous week at a launch event at New York City’s Hudson Yards attended by Olympic skier and Longines “ambassador of elegance,” Mikaela Shiffrin. Like the Conquest VHP Chrono, the new Conquest Classic is offered in two sizes, 29.5 mm and 34 mm in diameter, both in stainless steel. Inside is a Swiss quartz movement, beating behind one of five different dials: sunray silver (pictured), sunray blue, sunray black, and two mother-of-pearl options, in white or black. The time is kept on either pink-gold bar indices or on pink diamond indices. Much like the horse that conquers Belmont Park’s 1.5-mile-long dirt track to win the “Test of the Champions” is draped in a blanket of white carnations — this year’s winner was Sir Winston, ridden by jockey Joel Rosario — the new Conquest Classic also offers a version with a case draped in diamonds. 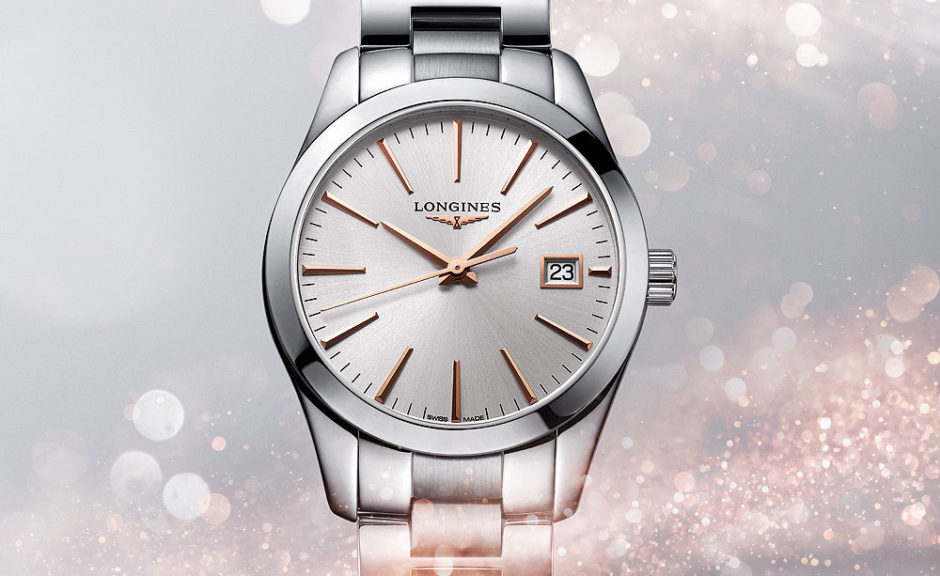 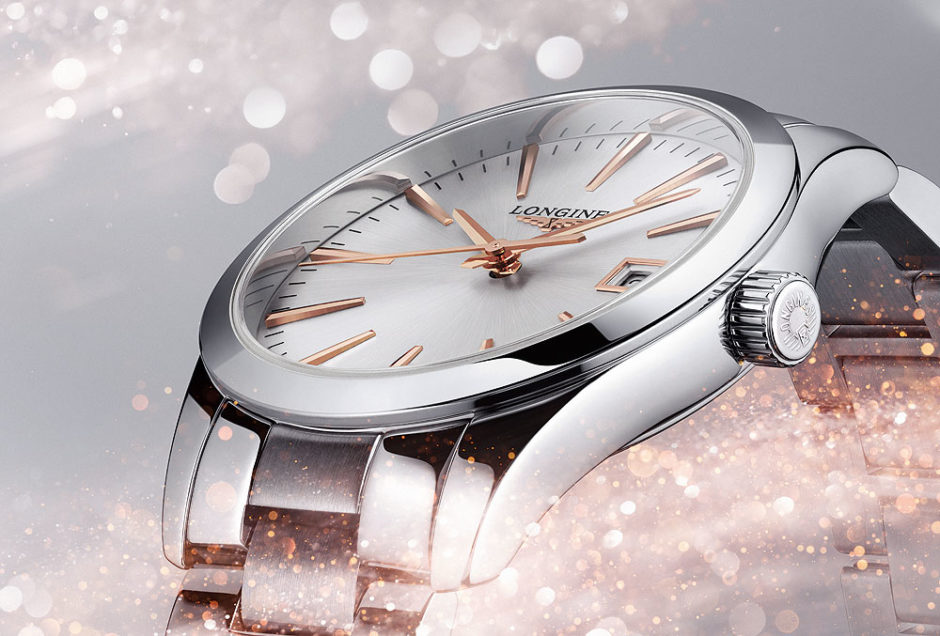 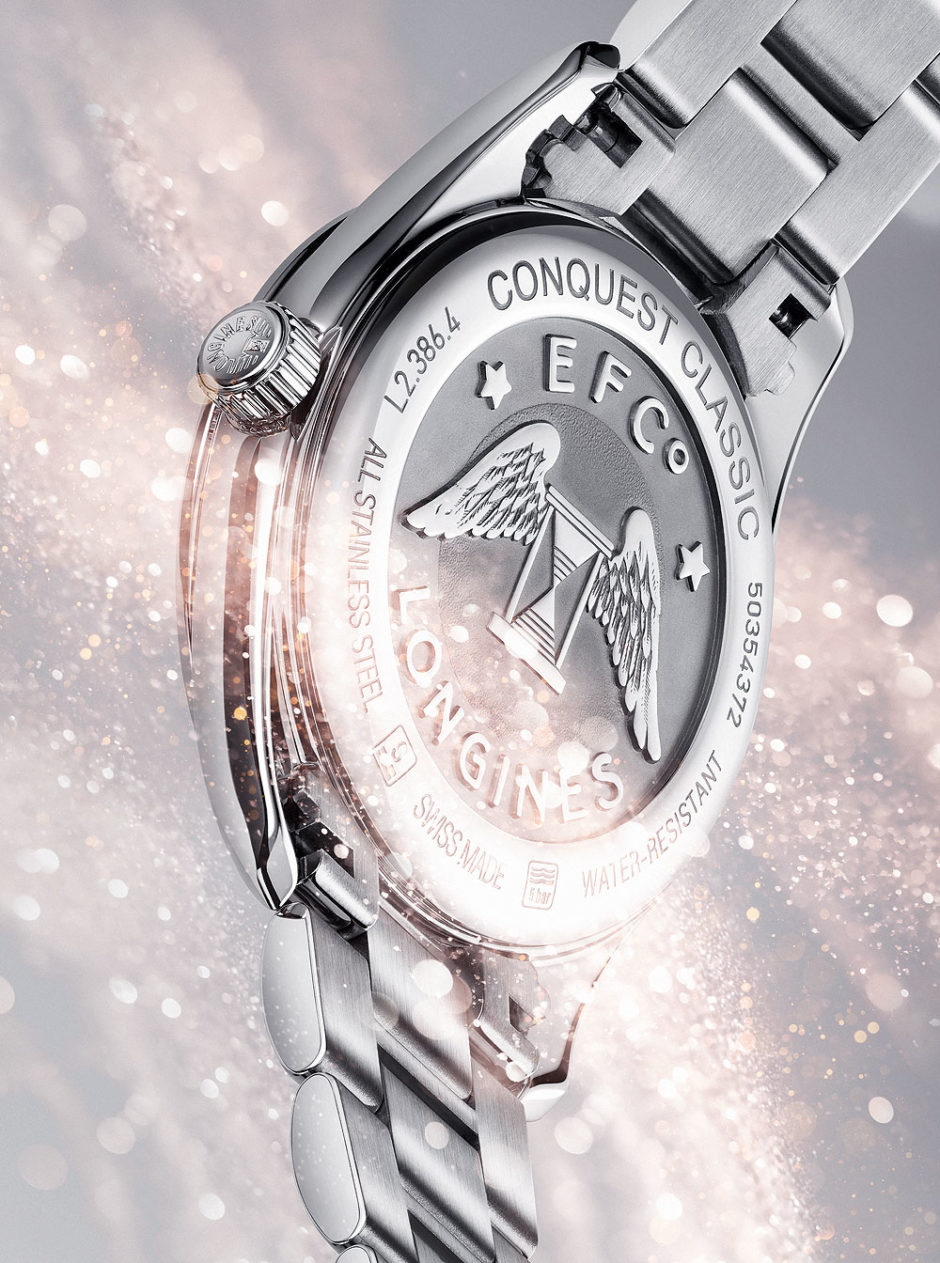 All in all, an impressive trifecta, and Longines has promised us that 2019 will bring more new releases; it remains to be seen which if any of these will make their way to the winner’s circles at next year’s Triple Crown races.