IWC’s Big Pilot’s Watch became an instant classic when it was re-released in 2002, but its history stretches much further back in time. In this feature from the WatchTime archives, we explore the Big Pilot and its many evolutions over the decades.

The history of IWC’s popular Big Pilot’s Watch stretches further back in time than the histories of most wristwatches. IWC first made the watch for the German Air Force in 1940. Observation watches inspired the styling of this 55-mm-diameter timepiece, which encased pocketwatch Caliber 52.T.S.C. This timepiece has left its mark on the design of pilots’ watches today – together with comparable models from German manufacturers like A. Lange & Söhne, Wempe, Laco, and Stowa.

Distinguishing characteristics were the military triangle flanked by two dots at 12 o’clock, a sans serif typeface for the numerals (which include a 1 that looks like an unadorned vertical bar), and rhombic hands. Each of these features can still be found today on almost all current IWC pilots’ watches. Even the Mark XVIII preserves the family’s design, although its prototype, the Mark 11 pilots’ watch created for the Royal Air Force in 1949, used other marks and hands.

But the successor of the original model wasn’t unveiled until 2002, when IWC re-released the Big Pilot’s Watch with a 46-mm-diameter steel case and in-house seven-day Caliber 5011. With its large, eye-catching size and sleekly simple design, this watch soon distinguished itself as a masculine statement on the wrist. In addition to the characteristic dial, the conical crown is another unmistakable feature, and a user-friendly one, too, because the crown’s shape makes it easy to use when wearing gloves.

The diameter of the case of the classical Big Pilot’s Watch has remained unchanged (46 mm) from 2002 to the present day, although current versions encase the improved Caliber 51111. Like the Mark models, the Big Pilot’s Watch belongs to the Classic Collection, whose watches have casebacks engraved with an image of the classic Junkers Ju 52 aircraft. The watch has a strap crafted by the artisanal Italian shoe and leather goods manufacturer Santoni. Over time, IWC has built the Big Pilot’s watch family into a small collection. Here, IWC pursues several different paths: the new models are more historical, more modern, more complicated or more elegant than the classic.

The Classic Collection also includes four Heritage models that are definitely worth a closer look. The 48-mm-diameter Big Pilot’s Watch Heritage 48 encases IWC’s own hand-wound eight-day Caliber 59215 and date display, but an even greater effect is achieved by the Big Pilot’s Watch Heritage 55: its 55-mm-diameter case contains hand-wound manufacture Caliber 98300, which amasses a 46-hour power reserve. Here, IWC is resuming its original diameter of 55 mm. With beige luminous material and a matte case, the newcomer’s style comes very close to its predecessor, even if it has a small seconds subdial; the original model had a central seconds hand.

IWC recently unveiled the Big Pilot’s Watch Heritage in a classical diameter of 46 mm. The unlimited edition has a titanium case, and the limited edition of 1,500 pieces is available with a bronze case. All are equipped with a soft-iron inner case to protect the movement against magnetic fields – the predecessor lacked this practical detail. The 48-mm version has a little window in the caseback, which offers a view of the balance and, according to IWC, scarcely detracts from the protection against magnetism.

IWC also offers an elegant version of the Big Pilot’s Watch in the Spitfire collection. Here the 46-mm case is made of rose gold, a sunburst pattern embellishes the anthracite-colored dial, and an engraving of a Spitfire fighter jet adorns the back. This line also includes a version that features the useful complication of a digital annual calendar: the 46-mm Big Pilot’s Watch Annual Calendar Spitfire is powered by manufacture Caliber 52850, which amasses a seven- day power reserve and can be admired through the sapphire back.

But IWC also knows its way around the world of modern design.The Top Gun Big Pilot’s Watch models combine a matte-black ceramic case and a textile-look wristband for a contemporary military touch that nonetheless preserves the other traditional characteristics. Here, too, a Big Pilot’s Watch is available in the classical 46-mm size. The titanium back bears the Top Gun emblem as a relief engraving. The wristband looks like it’s textile but is actually made of patterned calfskin for greater durability.

Another member of this line is the complicated Big Pilot’s Watch Perpetual Calendar Top Gun, which houses automatic Caliber 51614, based on the 50000 Caliber. In addition to the correct calendar with date, day of the week and month, it also displays the moon-phase with two lunar disks: one for the Northern and one for the Southern Hemisphere. A four-color version of the Top Gun logo adorns the caseback.

There are also elegant models that commemorate French pilot and author Antoine de Saint-Exupéry and his famous book, The Little Prince (Le Petit Prince). e classical Big Pilot’s Watch is currently available in a 46-mm steel case only as the Big Pilot’s Watch Edition “Le Petit Prince” with a blue sunburst-embellished dial. The Big Pilot’s Watch Annual Calendar Edi- tion “Le Petit Prince” knows which months have 30 days and which have 31 days, so it needs man- ual correction only at the beginning of March. IWC offers it in rose gold or in white gold, each in a limited series of 250 watches. The sapphire back reveals a planet-shaped rotor and a portrait of the Little Prince based on Saint Exupéry’s sketch, which he included in his book.

IWC also offers the annual calendar as the Edition “Antoine de Saint-Exupéry” with a brown dial, also limited to 250 watches, but only in rose gold. The sapphire back has a view of the rotor, which is similarly made of rose gold and depicts a Lockheed P-38 Lightning – the last aircraft flown by Saint-Exupéry.

The Big Pilot’s Watch Perpetual Calendar Edition “Antoine de Saint-Exupéry” requires manual correction even less frequently because its calendar mechanism also switches correctly at the end of February – and does so not only in ordinary years, but also in leap years. This steel watch also has a sapphire back. The rose-gold rotor bears the letter A – the initial of the first name of the pilot and author; another letter A is on the dial. Unlike the perpetual calendar in the Top Gun line, this watch has a simple moon-phase display. IWC uses the elegant numerals with serifs on the annual calendars and on the perpetual calendar in this edition.

IWC has also released numerous special editions over the years: the Big Pilot’s Watch Edition DFB, the official watch of the German national soccer team, was unveiled in 2012 with a silver dial. There was a version made for the Patrouille Suisse aerobatic squadron (which also had a silver dial) and various editions for jewelers with yellow, orange or red numerals. Not counting these special editions, the current collection consists of 12 different models. More than one-third of all IWC pilots’ watches are Big Pilot’s Watches.

Prices begin at $12,900 for the steel version of the Big Pilot’s Watch (as well as for the Edition “Le Petit Prince”). At the other end of the price range are the Perpetual Calendar Top Gun for $38,600 and the Annual Calendar “Le Petit Prince” in white gold for $35,200. Fans of the Big Pilot’s Watch can look forward to other variations in the future.

6 Responses to “Flying Ace: Tracing the History of the IWC Big Pilot’s Watch”

END_OF_DOCUMENT_TOKEN_TO_BE_REPLACED 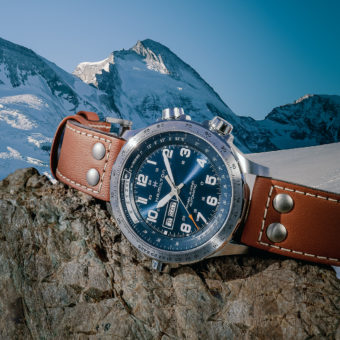 Crosswind at the Matterhorn: Reviewing the ...