The United States of America celebrates its most patriotic holiday today, July 4, and what better way to show off both your American pride and your horological savvy than by sporting one of the rare special-edition timepieces aimed exclusively at the American market? We rounded up five, including a few that bear the red, white, and blue colors of Old Glory.

Germany’s A. Lange & Söhne is offering a new, highly limited version of the Saxonia Annual Calendar to its devotées in the United States, clad in a 38.5-mm white-gold case, a new gray dial, and a handful of subtle but significant details seen for the first time on a Saxonia watch. Aside from the obvious elements that set this watch apart as distinctive from its non-limited peers — the gray color of the solid silver dial, the blue, hand-stitched alligator strap — there are a few touches that are less noticeable at first glance but sure to appeal to the brand’s discerning audience of aficionados. One is on the front of the watch: namely, in the aforementioned “outsize” date display. For the first time in a Saxonia model, the numerals are in a white font on a gray background, thus harmonizing seamlessly with the dial’s color scheme. The other is on the back side of the exposed movement, Lange’s self-winding L085.1 SAX-O-MAT, where the parts surrounding the embossed A. Lange & Söhne logo on the gold rotor are plated in black rhodium and subsequently finished with a circular graining for a gilded effect. For more detail on the watch, click here.

The Longines U.S.A. Exclusive HydroConquest is an extension of the Saint-Imier-based brand’s popular HydroConquest series of sporty dive watches, consisting of three editions, all sold exclusively in the United States, limited to 1,000 pieces, and sporting subtle American-inspired detailing. The color options range from traditional stainless steel to stainless steel with a black or gray PVD coating. The dials come in sunray-finished black, gray, or bright blue, with red indexes, a small “USA” script in the bottom right corner, and a luminous 50 in the upper left corner of the bezel in honor of the 50 states of America. Inside the 41-mm, 300-meter water-resistant case, whose back is engraved with an American flag motif, beats Caliber L888, which uses an ETA A31.L01 as its base, that features automatic winding, a 25,200-vph frequency, and a power reserve of 64 hours. For more info, and to see other variations, click here.

When the United States Navy was looking to equip its sailors with highly precise nautical instruments in 1902, it turned to a Swiss watchmaker most renowned for such seaworthy tools: Ulysse Nardin. The new Ulysse Nardin Executive Skeleton Tourbillon “Stars & Stripes” — launching officially on July 4 and limited to 50 pieces, one for each state in the Union — pays tribute to UN’s century-plus history as suppliers of timing instruments to American naval ships. Its openworked, tourbillon-equipped movement, Caliber UN 171, echoes the stars and stripes of the American flag with its miniature painted surfaces in red, white, and blue, adding a splash of patriotic color to the skeleton dial’s Roman numeral indices and rectangular center. A matte blue color is also used for the ceramic bezel, the crown, and the carbon-effect leather strap. The 45-mm case is made of titanium, and the manual-winding movement offers an impressive power reserve of 170 hours — nearly seven days.

Richard Mille has announced three new limited editions of its RM 022 Tourbillon Aerodyne Dual Time Zone watch, introduced in 2010 and recognized for bringing new materials from the aerospace industry into watchmaking. (Our colleagues at Monochrome review the watch here.) The new Red, White, and Blue Editions, each limited to 10 pieces and sold exclusively in Richard Mille boutiques in the Americas, are notable for their tripartite cases that combine two other aerospace engineering materials, Quartz TPT and Carbon TPT. Quartz TPT, used for the bezel and caseback, is made from layers of parallel silica thread filaments and saturated with red, white, or blue resin. Heated at 120º C and subjected to 6 bars of pressure before being machined, the substance develops great strength and temperature resistance. Carbon TPT, used for the casebands, is made in an identical process but using carbon threads; on the white model, this material is also interspersed with the quartz fibers in the front and back to achieve a “striped” effect. The cases measure 48 mm x 39.7 mm and contain a manual-winding tourbillon movement, equipped with the model’s innovative and user-friendly dual time zone indicator, which holds a power reserve of 70 hours. 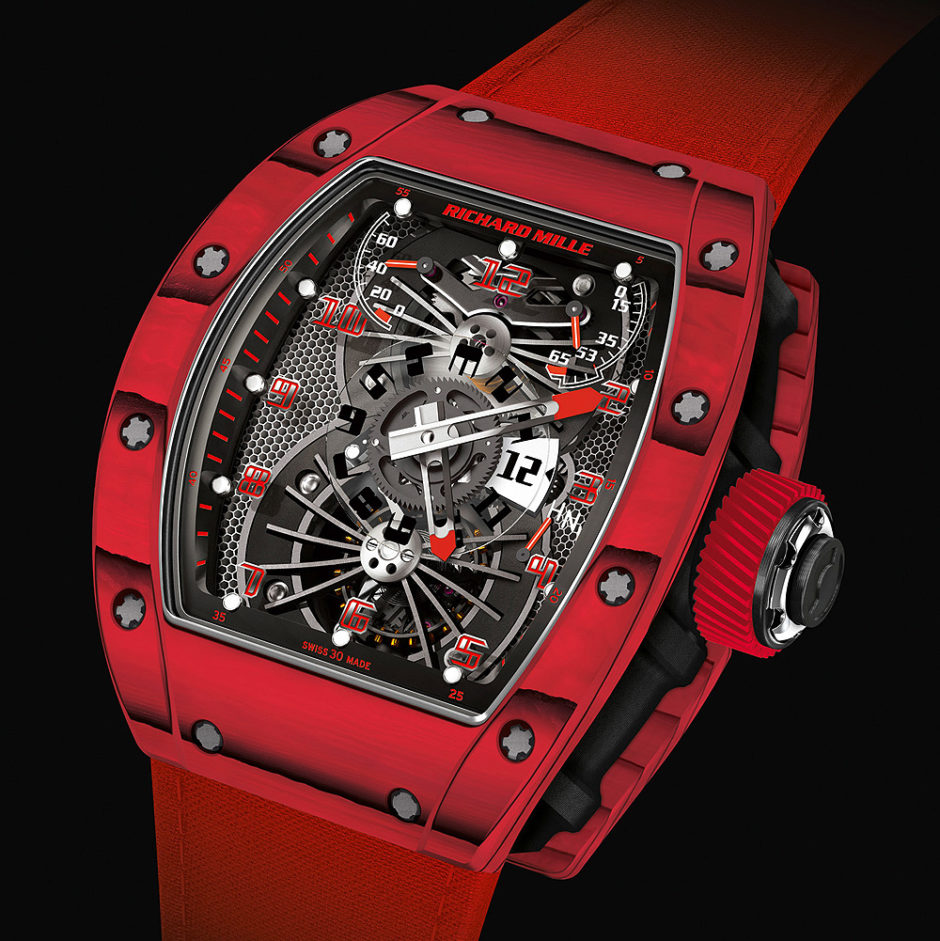 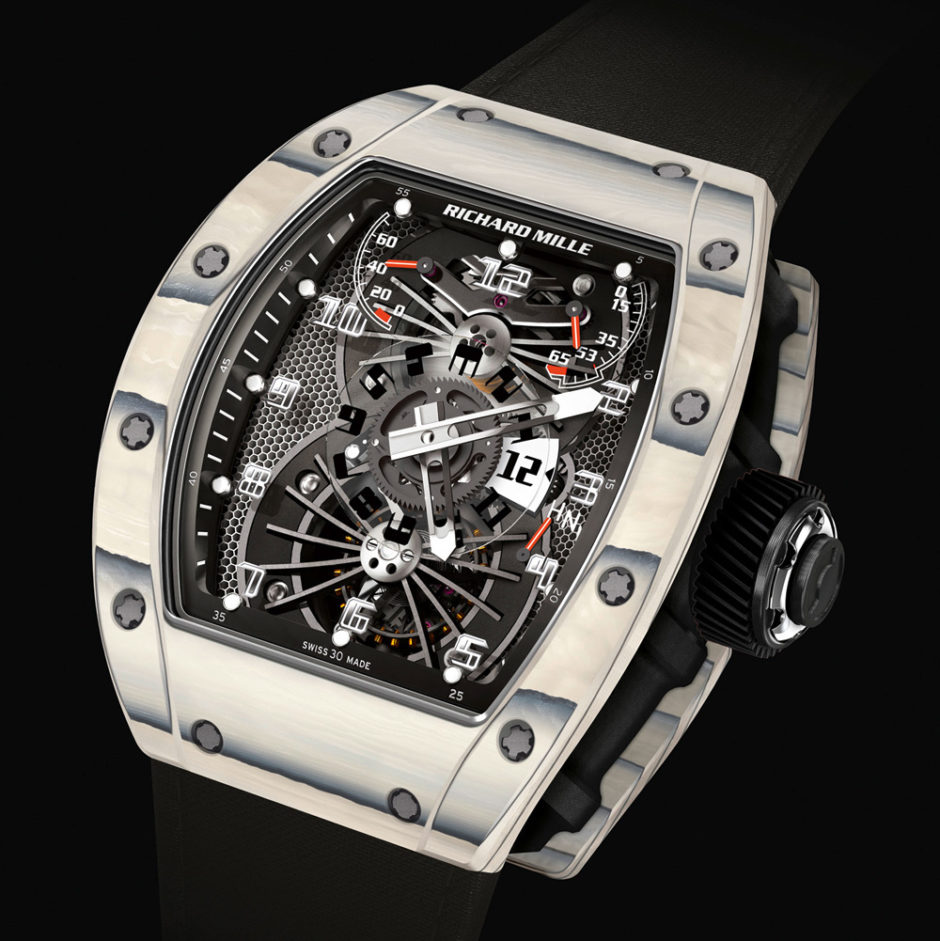 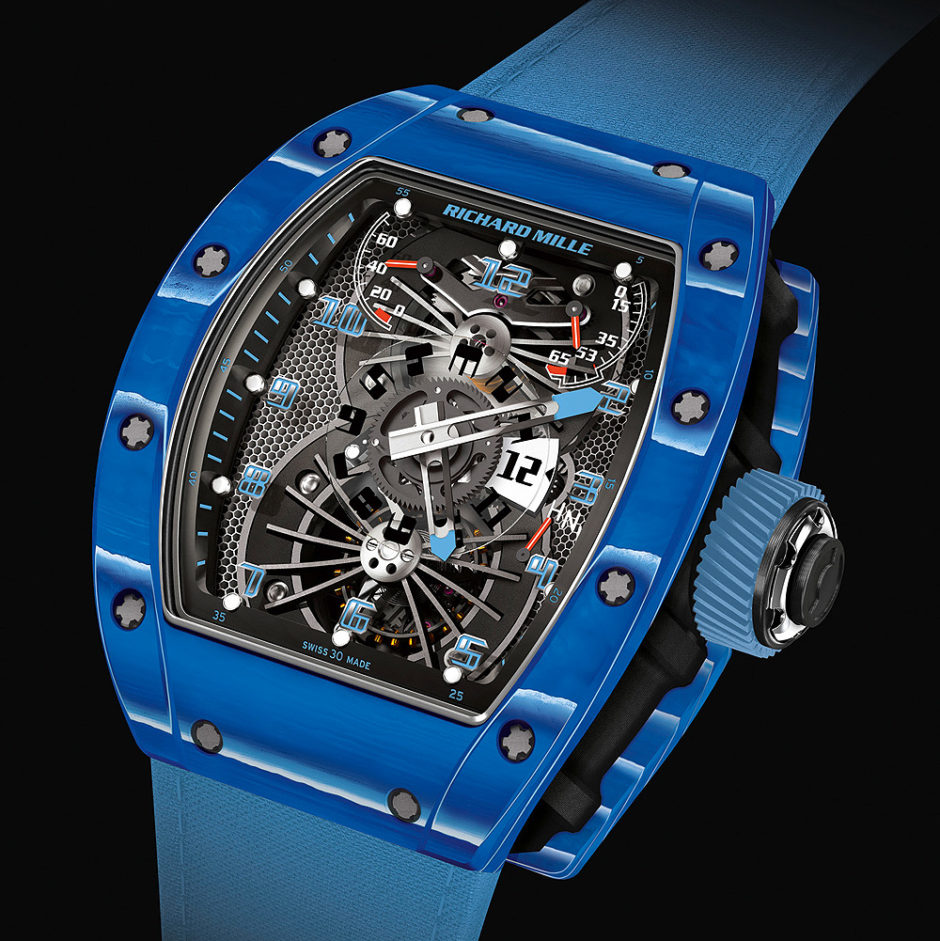 In 2016, Zenith unveiled the Zenith Pilot Type 20 GMT, one of two special editions sold only at authorized retailers in North America. The watch sports a 48-mm-diameter case made of black DLC-coated titanium with a domed sapphire crystal. The white numerals on the blue dial are treated with cream-colored Super-LumiNova for a “vintage” look. Bright red is used for the tip of the central GMT hand and the numerals on the 24-hour scale on which the dual-time function is displayed. Small seconds appear on a subdial at 9 o’clock. The movement is Zenith’s automatic Elite 693, with a frequency of 28,800 vph, 26 jewels, and a 50-hour power reserve. The watch’s case is water-resistant to 100 meters and features a solid, engraved caseback depicting a scene straight from American aviation history: the Wright Brothers’ historic “Flyer” glider launching over Kitty Hawk in 1903.

Celebrate Independence Day with a WatchTime subscription at a special reduced price of just $29.99, for a limited time from now through July 8! Click here for order details!

No Responses to “Five U.S.-Exclusive Watches for Independence Day”