In an unexpected move by Blancpain, the brand is launching not one, but two unique dive watches in the Fifty Fathoms series that pay homage to the golden age of horology from the 1950s to 1960s. The Fifty Fathoms is famed for being among the first dive watches to hit the market during the mid-19th century — more importantly, it was one of the first watches to use the critically important uni-directional bezel. These two new pieces honor the long history of military partnerships and scuba diving which have formed the foundation of the collection’s legacy.

The first of these watches is the “Nageurs de Combat” watch, a 300-piece limited-edition run designed to evoke the origins of the Fifty Fathoms line. The design inspiration is drawn from 1953, whereupon the request of the French Combat Swimmers corps and after numerous prototypes, Blancpain delivered the first Fifty Fathoms watch. In today’s watch’s design, we see this DNA, with the brand using a prominent unidirectional bezel topped with its signature diamond mark, a matte black dial with triangular circular and rectangular hour markers, and straight sword-style hands and a slim arrow seconds hands.

Yet past the vintage stylings, the watch also has some more explicit honors to its history, as seen by the subtle 7 towards 6 o’clock, which references the maximum meter depth commando frogmen can reach when using pure oxygen. The engraved Combat Diver Qualification Badge seen on the watch’s case back, which is a mark authorized by the French army for Blancpain’s use in this watch, further showcases the shared heritage between the Swiss watch brand and the French military. Together these features, executed on a large 45-mm satin-brushed steel case and produced using modern manufacturing practices, alongside an inner 1315 self-winding movement with 5-day power reserve, evoke an overall unique homage piece in Blancpain’s collections.

The second of these pieces is the Fifty Fathoms Barakuda re-edition that is limited to 500 pieces. This neo-vintage piece is inspired by a Fifty Fathoms model that was supplied for the German Bunesmarine and civilian market in the late 1960s via Barakuda – a company which specialized in the production and marketing of technical diving equipment in the country. The 300-meter water resistant watch uses a 40-mm brushed steel case with a unidirectional bezel that features a domed sapphire insert. 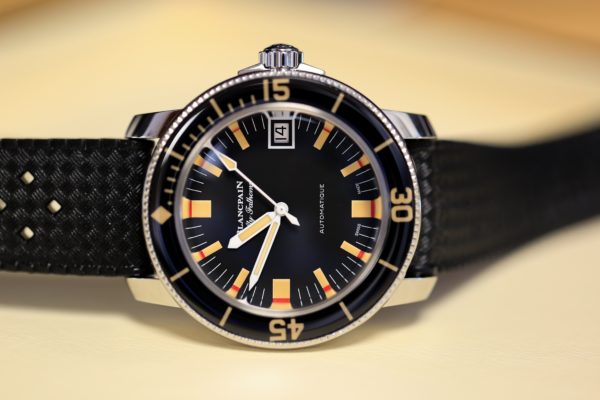 On its black dial, the Barakuda uses rectangular markers for each of the hours, with larger markers for the quarter positions and white tick marks to indicate the minutes. At the 3 o’clock position is a white outlined date window, while pencil hour and minute hands and an arrow tipped seconds hand sweep over it for the time. Throughout the design is the use of red and “old-radium” Super-LumiNova accenting, drawing influence from the aged look of vintage models. Powering this model is automatic Caliber 1151, capable of a 100-hour power reserve, and, in typical Blancpain fashion, it is adorned with expert finishing.