Hollywood is all about awards — Oscars, Golden Globes, Emmys, etc. — so it was only fitting that the first WatchTime Los Angeles event included among its plethora of luxury watches on display a number of timepieces that were awarded watchmaking’s highest honor, a prize from the Grand Prix d’Horlogerie de Genève (aka the Geneva Grand Prix or GPHG). Here are five award winners you may have encountered if you were prowling the halls at Hudson Loft last weekend.

The Bovet Récital 22 Grand Récital, winner of the Aiguille d’Or, the top prize in the 2018 GPHG, is the third and final part of a triad of timepieces that began with the Récital 18 Shooting Star Tourbillon in 2016 and continued with the Récital 20 Astérium in 2017. The case functions as a horological tellurium, including a stunning, hemispherical, birds-eye view of the Earth at 12 o’clock and a flying tourbillon at 6 o’clock that represents the sun with a carriage bridge acting as fiery rays shooting out of the sun’s body. Finally, a spherical moon orbits the Earth according to the exact length of its synodic period of 29.53 days. The half-Earth that displays the Northern hemisphere rotates on its own axis and demonstrates the passage of time on a natural 24-hour cycle. The surface of the Earth is engraved and hand-painted giving the oceans, mountains, deserts, and forests an unmistakable sense of realism. At the base of the globe, a graduated scale displays the hour by means of a three-dimensional polished titanium hand, situated between the tourbillon and the globe. On the back side, there is a fully functional perpetual calendar that features the hour, day-of-week, date, month, and leap-year indicators. One noteworthy detail is that the date wheel is actually double-sided, which is an interesting idea catering to the perpetual calendar pedant. For more detail on the complexities of the Grand Récital, click here for our full article.

The Parmigiani Toric Hémisphères Rétrograde, which copped the Travel Time Watch prize at 2017’s GPHG, is ingeniously designed to allow any two time zones to be paired to the nearest minute, even the oddball half-hour and quarter-hour zones that deviate from the standard 24 one-hour zones based on the Greenwich meridian. Designed by brand founder and namesake Michel Parmigiani, the watch’s movement uses an indexed module to control the second time zone, operated by a crown at 2 o’clock. When the crown is pulled out, the module is disengaged from the main movement allowing separate adjustment of the second time zone, displayed on the 12 o’clock subdial, to the nearest minute. When this crown is pushed back in, the main time zone and the second can be adjusted simultaneously to a desired interval. Each of the two time zone displays includes its own day-night display in a small circular window, and the date is indicated on a retrograde hand with a crescent moon tip, sweeping across a scale of large numerals in an elegant font. Inside the rose-gold case, with the knurled bezel typical of the Toric family of timepieces, beats the self-winding Caliber PF 317, with a double series-mounted barrel holding a power reserve of 50 hours.

De Bethune’s DB25 Starry Varius Chronomètre Tourbillon took home the 2018 GPHG prize for best Chronometry Watch. The watch takes the astronomical motifs that the independent brand has become known for over the past decade-plus to the next level, offering the customer the option of customizing the night-sky dial to that of any date and geographic location ever — say, where and when he was when he proposed or witnessed the birth of a child. Each star is notched by fitted gold pins that are placed one at a time. The Milky Way pattern is made possible through a traditional gold leaf technique and enhanced by laser-beam micro-milling. The thin case (8.8 mm) is made from polished grade-5 titanium and comes in at 42 mm in diameter. The watch also features the openworked lugs that have become one of De Bethune’s signature design elements over the years. Inside is the manual-winding DB2005 caliber with a six-day power reserve, visible through a sapphire caseback.

END_OF_DOCUMENT_TOKEN_TO_BE_REPLACED 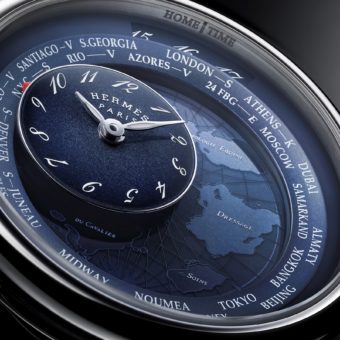