Swiss Watch by JCK, part of the annual JCK Watch and Jewelry show, opened today, with luxury watch brands showing their wares at the Mandalay Bay Hotel and Casino. On our first day at the show, we discovered some intriguing timepieces, including one new model, which was not ready in time to debut at Baselworld, making its debut.

The latter is Dubey & Schaldenbrand’s Grand Shar Tourbillon DBT Ti (below). The “Ti” as many will recognize, stands for titanium. The entire case, including the lugs, is made of a lightweight, comfortable-to-wear titanium in an appealing clay/gunmetal color. It’s one of the sportiest tourbillon watches we’ve seen lately. Dubey & Schaldenbrand, a La Chaux-de-Fonds-based brand only recently returned to the States, is premiering the piece right here in Las Vegas, along with the other models in its redesigned Grand Shar, Grand Dome and Artisan Extreme lines that were introduced in Basel.

Also keeping with the titanium theme is Corum, which is maintaining its focus on its two major families, Bridges (which includes Golden Bridge and Ti-Bridge models) and Admirals’ Cup. This new Ti-Bridge model is the first with a titanium bracelet. It contains Corum’s well-known baguette-shaped movement, made of titanium like the case, which also now has automatic winding thanks to its clever, linear-moving rotor. This model also has a vertical, linear power reserve indicator on the front: note the white pointer on the left, which moves from “high” to “low.”

No Responses to “Titanium Timekeepers at JCK Las Vegas”

END_OF_DOCUMENT_TOKEN_TO_BE_REPLACED 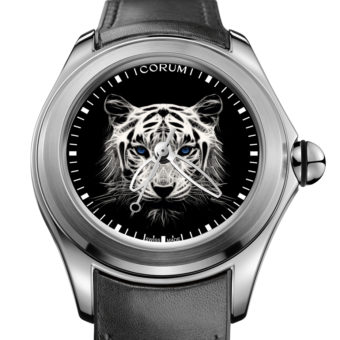