It’s only been a few years since the Ferdinand Berthoud marque was resurrected by the Chopard Group but there’s no doubt that it has been extraordinarily impactful during that time. In 2016, the young brand took home the prized Aiguille d’Or (basically the equivalent of winning Best Actor/Actress at the Oscars) at the GPHG awards. Next week at Baselworld we’ll have a chance to get fully caught up with all that the brand has going on but, first, here’s a look at its latest release from SIHH in January.

The FB 1R.6-1 is inspired by research Ferdinand Berthoud (1727-1807) did while building his original marine chronometers over 200 years ago, specifically Marine Chronometer No. 7. That original model was constructed to improve the operating principles of longitude watches. The main difference was a display that switched out the traditional central minute hand with a seconds hand and adding in a minutes subdial to replace the seconds subdial.

The new model features a case made from carburized stainless steel that has been reinforced through a thermo-chemical process involving the diffusion of vapor-phase carbon, which guarantees improved surface hardness, corrosion resistance, and biocompatibility. The case has two octagonal-shaped stainless steel side pieces, giving it a distinct shape with two lateral portholes at 2 and 11 o’clock — allowing an aperture to view the chain-and-fusee mechanism in action. These two openings are complemented by a screw-down stainless steel case-back fitted with glare-proofed sapphire crystal enabling a look at the finishing on the FB-T.FC-R movement.

The hand-wound movement features 18 nickel silver bridges framed by polished titanium pillars surrounding the mechanical organs. This construction calls back to 18th-century marine chronometers. The most distinctive aspect of this movement is the inverted and suspended barrel and fusee. Ferdinand Berthoud filed a patent for this construction which aids in cutting down the overall size of the movement. The movement comes in at 9.89 mm thick while the watch as a whole clocks in at just under 14 mm. The watch itself has a diameter of 44 mm.

Ferdinand Berthoud filed another patent for the unique power reserve indication. Visible through a cut-out in the half-bridge on the caseback side, a truncated cone moves up and down along an arbor connected to the barrel. This suspended cone is topped by a feeler spindle in the form of a mobile arm tipped with a watch jewel. The latter’s position on the cone reflects how much power is left. The feeler spindle then transmits the amounts of energy accumulated by the mainspring to a set of chamfered and rhodium-plated flat levers visible through a cut-out in the regulator plate. Its role is to amplify the displacement of the power-reserve hand. A spiral spring placed at the far end of its travel exercises a force on the base of the power-reserve hand and displays the power reserve. This spring is made from a nickel-phosphorous alloy that guarantees the concentric deployment of the coils in all states of winding and unwinding and helps to avoid any distortion that could be detrimental to the running of the mechanism.

The barrel of the FB-T.FC.R caliber is equipped with a “Maltese Cross” stop-work device. This helps limit the winding turns of the mainspring to around six, so as to use only the most stable portion of this spring. This device also acts as a buffer when the barrel is fully wound. At that point, the mainspring torque exerts a three kilogram force, which is considerable for the chain components measuring just a few millimeters. To make sure the movement is secure, the Ferdinand Berthoud team equipped the stainless steel crown with a dynamometric function that helps avoid any damage to the movement caused by excessive winding.

The regulator itself is made from nickel silver, vertically satin-brushed by hand and black rhodium-plated. There are three small apertures on the dial, the first serves to show the hours, offset at 2 o’clock and appearing on a glare-proofed sapphire crystal disc with Arabic numerals on a white background. The second opening features a large dial cut-out revealing part of the sandblasted and black rhodium-plated mainplate. This is the previously mentioned power-reserve display. Located at 12 o’clock is the chamfered, bead-blasted, and black rhodium-plated minutes counter. The center of it is open to feature the gear train that connects to the hour indication. Finally, the seconds ring runs around the rim of the dial on a flat inner bezel ring made of, of course, black rhodium-plated, bead-blasted, and chamfered nickel silver. 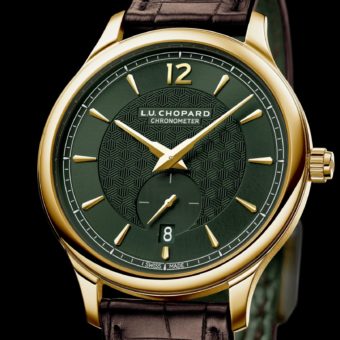 Chopard Celebrates 25 Years with the Limited ...

END_OF_DOCUMENT_TOKEN_TO_BE_REPLACED 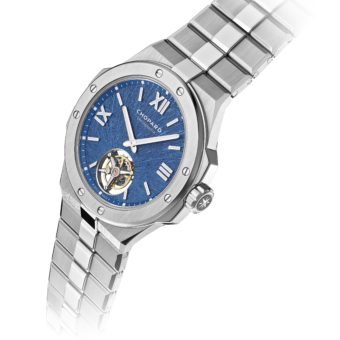