RJ, né Romain Jerome, kicked off its collaboration with Warner Bros. and DC Comics in 2014, producing the first Batman-DNA watch. This year, after a detour into the Marvel Universe for 2018’s Spider-Man limited edition, the Swiss producer of pop culturally influenced timepieces returns to the mean streets of DC’s Gotham City to launch two new limited editions based on Batman’s archfoes the Joker and Two-Face.

Both of the watches come in 45-mm brushed titanium cases, designed in the ARRAW style characteristic of the RJ brand’s base collection, which is distinguished by four rubber bumpers, distinctively shaped curving lugs, and arrow-shaped hands. In most other respects, the watches are as distinct from each other as the two Bat-foes they represent, one equipped with a self-winding chronograph caliber and the other a manually winding movement that has been specially skeletonized to reflect its namesake’s schizophrenic nature and appearance.

Each of the 100 ARRAW The Joker watch models features individually painted dials reflecting the visage of the Clown Prince of Crime, no two exactly alike. Two black subdials represent the villain’s eyes, surrounded by an airbrushed field of white that fades at the edges, approximating the pasty look of the Joker’s face with its haphazardly applied clown makeup. The 9 o’clock subdial tallies 30 elapsed chronograph minutes, running seconds tick away on the 3 o’clock subdial, and the date appears in a window at 6 o’clock. The case’s titanium bezel is engraved with a Joker-inspired motif that RJ describes as “intentionally chaotic.”

The Joker’s signature weapon, his deadly razor-tipped playing cards, are represented on the openworked, arrow-shaped hour and minute hands, which are tipped with a stylized ace symbol; this motif is also used for the applied hour markers which alternate with the applied Arabic hour numerals. The central chronograph seconds hand, finished in the Joker’s signature purple, has a stylized “J” as its counterweight. Inside the case, behind a solid caseback laser-engraved with an image of the grinning criminal mastermind, is the chronograph-equipped, self-winding RJ2402 movement, with a 28,800-vph frequency and a 42-hour power reserve. Each timepiece includes three interchangeable straps: two in purple and green alligator leather (Joker’s suit and hair colors, respectively) with rubber lining, the third in black rubber. The RJ ARRAW The Joker limited edition, which comes with an exclusive deck of Joker-branded playing cards, retails for $17,900.

The RJ Arraw Two-Face Edition pays tribute to the dual nature of the conflicted villain once known as Harvey Dent, a crusading Gotham City district attorney driven to madness by a disfiguring acid attack that left both his face and his personality split in two — one handsome and noble, the other horrific and evil. The titanium case is similarly divided, with its left side clean and structured and its right side scarred as if it were burnt away with acid. The dial continues the motif, solid and sober on the left side, while the right side is open to reveal the skeletonized movement.

The symmetrically disfigured look of the titanium bezel is continued on the calf leather strap, clean on the left side and visually and tactilely distressed on the right in a process exclusive to RJ, which integrates seamlessly into the ARRAW case and closes with a deployant titanium clasp. The strap is also easily interchangeable using the release push-buttons on the lugs in the shape of Batman logos — the same system used to switch straps on the Joker watch. Another visual shout-out to Two-Face’s origin and his history in Batman continuity is the seconds counter at 9 o’clock in the form of a laser-engraved coin: one of the villain’s hallmark traits is flipping a two-headed coin, clean on one side, scarred on the other, to make decisions between good and evil. 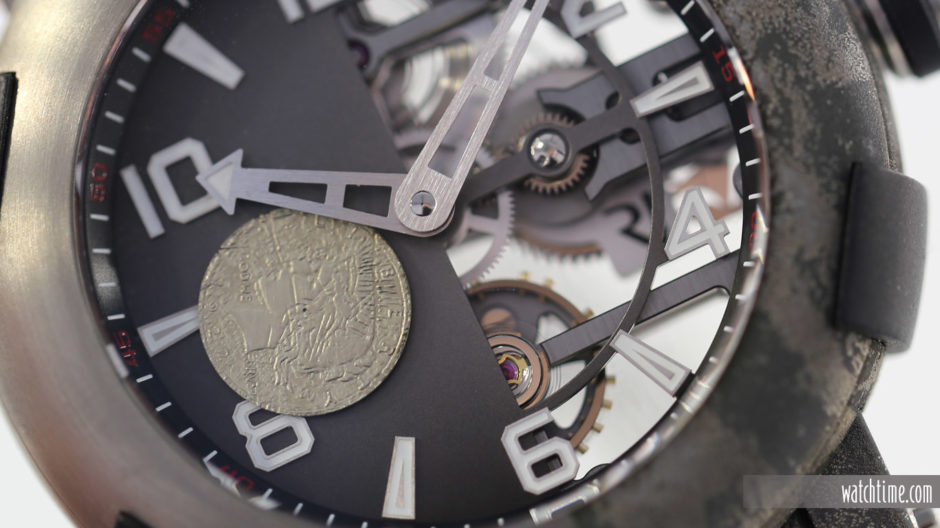 Close-up on the segmented dial.
1/3 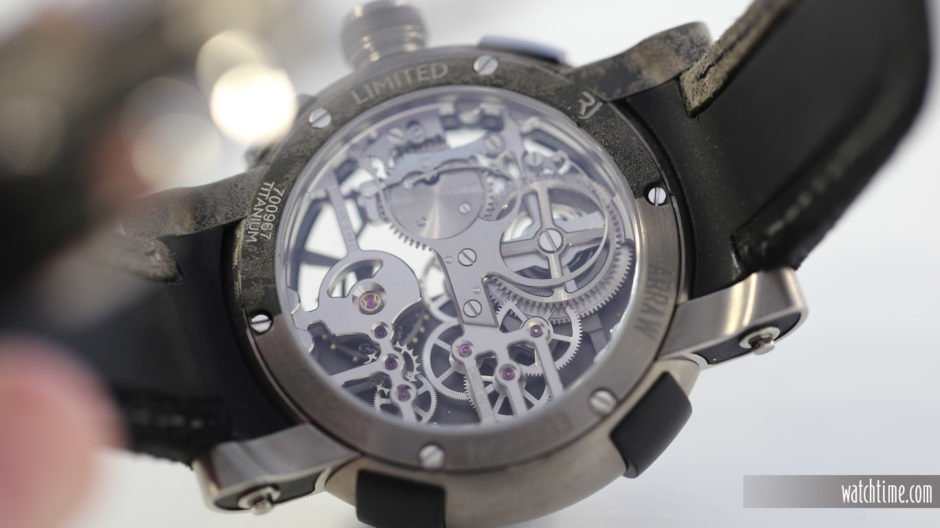 The manually winding movement and its decorations are on display through the caseback.
2/3 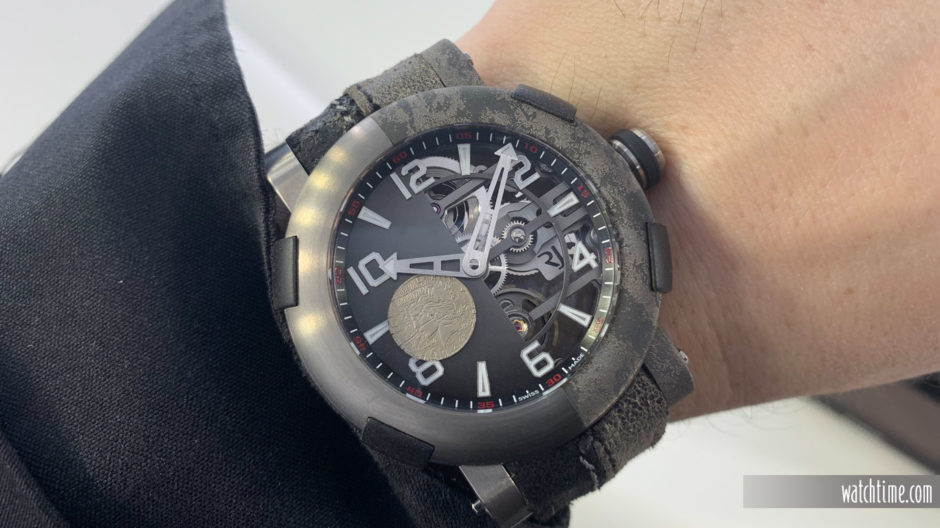 On the wrist with the RJ ARRAW Two-Face Watch.
3/3

Half-visible through the dial side, the manual-winding, skeletonized Caliber RJ004-M is on full display behind the watch’s exhibition caseback. Previously deployed in Romain Jerome’s Skylab watches, the movement has been enhanced with chamfered edges and straight angles, oscillates at 21,600 vph, and carries a 48-hour power reserve. Along with the watch, each purchaser will also receive a specially struck commemorative Two-Face coin. How much “coin” will you need to acquire the RJ ARRAW Two-Face limited edition? That would be $22,700.

No Responses to “Say Hello to the Bad Guys: RJ Limited Editions Inspired by Batman Foes Joker and Two-Face (Updated with Live Images)”