The Swatch Group decided to forgo Baselworld in 2019 and have its 12 exhibiting brands release their latest novelties on their own terms. While we’ve seen a number of releases slowly trickle out throughout the first few months of the year, it’s all led up to the inaugural “Time To Move” event that took place the week of May 14 in Switzerland. WatchTime was one of the select few American publications invited to attend the exclusive brand presentations, and we spent that time meeting with six of the Swatch Group’s most prestigious marques — Breguet, Blancpain, Jaquet Droz, Glashütte Original, Harry Winston, and Omega — to view the watches that would be defining the rest of the year. As we continue to focus on the brands’ highlight pieces, we turn our attention today to Harry Winston’s groundbreaking Histoire de Tourbillon 10.

“Histoire de Tourbillon” translates roughly as “story of the tourbillon,” and master jeweler and watchmaker Harry Winston has written a bold new chapter with the 10th piece in that prestigious series, which, not coincidentally, also marks that series’ 10th anniversary. The Histoire de Tourbillon 10 — which is available in three case materials, 10 pieces in 18k white gold, 10 in 18k rose gold, and one unique piece in the brand’s proprietary Winstonium alloy — is the first series-produced wristwatch to include four tourbillon regulators. Arranged in perfectly symmetrical order at the four corners of the rectangular case (53.3 mm wide by 39.1 mm tall), the tourbillons each make a counterclockwise 36-second rotation and are connected by three differentials. The technical idea behind this arrangement, according to Harry Winston, is to unify the quartet of regulating mechanisms for an ideal offsetting of the effect of gravity on the movement. (The tourbillon was, of course, originally invented in the 18th century to neutralize or at least minimize these effects on pocketwatch movements, which were far more subject to them than modern wristwatches.)

The dial of the Histoire de Tourbillon 10, which provides a large, clear window into this mechanical tableau, is itself something of a technical marvel: it’s cut from a single piece of sapphire and has a central hollow circle surrounded by a chapter ring with applied hour markers. A rectangular extension sloping upward to downward carries the large 6 and 12 applied hour numerals, while the bezel is chamfered, beveled, and elevated higher at 6 and 9 o’clock. At the latter two points, this bezel is notched; together, these elements of the dial and bezel re-create the famous “Harry Winston arches” at the entrance to the company’s Fifth Avenue Showroom in New York City, an aesthetic element referenced in some fashion or another on all Harry Winston timepieces.

The manual-winding, quadruple-tourbillon movement, Caliber HW4702, is designed to fit snugly into the rectangular case. Made up of no less than 673 components (each tourbillon accounts for 78 pieces), it beats at a frequency of 21,600 vph (3 Hz) and stores a power reserve of 55 hours when fully wound. The haute horlogerie finishes on the bridges and mainplate vary with the case material: the Winstonium unique piece has a blue treatment on its titanium tourbillon bridges and gear wheel bridges, and a rhodium-plated mainplate; the white-gold model has rhodium-plated tourbillon bridges and dark gray-finished mainplate and barrel bridges; the rose-gold watch inverts this color scheme, with a rhodium-plated mainplate and gray-finished tourbillon bridges. Subtle yet luxurious details also distinguish each model’s alligator leather strap. Both the Winstonium and white-gold timepiece are mounted on a black strap with contrast stitching in 950 platinum thread; the rose-gold piece comes on a new black strap with copper highlights and stitching in rose-gold thread. Scroll through the slideshow below to see live shots of the watches taken at the Swatch Group’s Time to Move event. 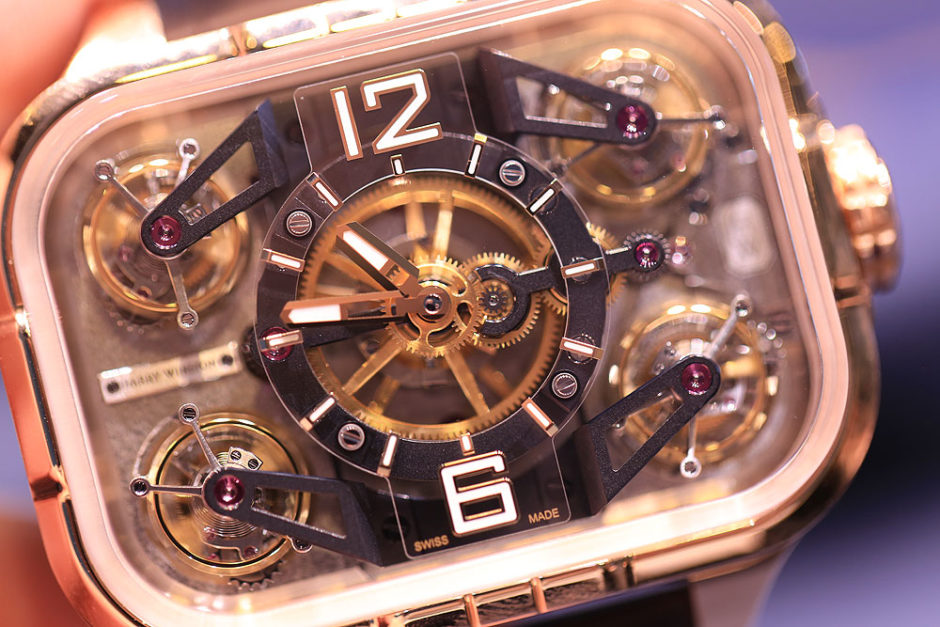 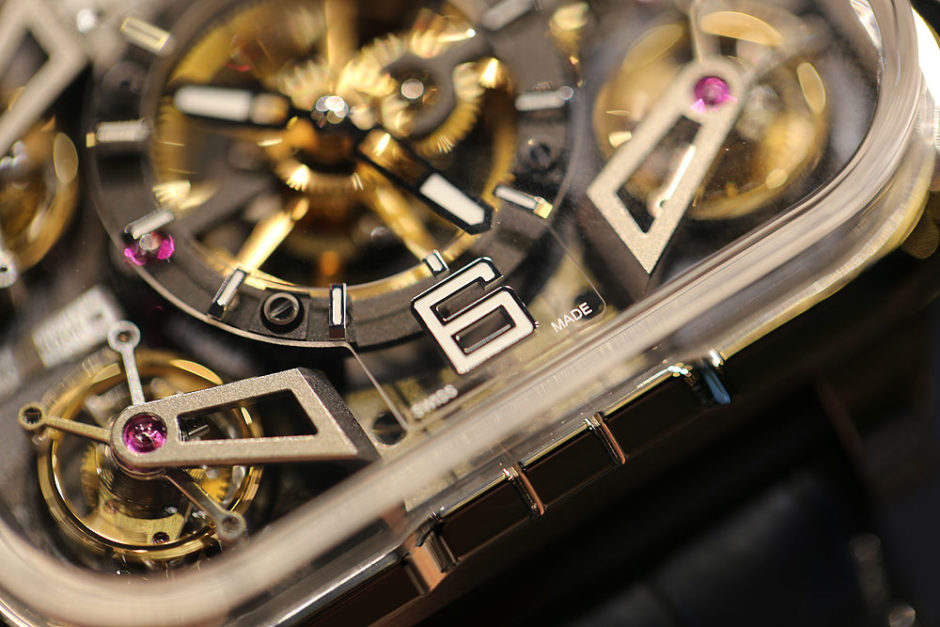 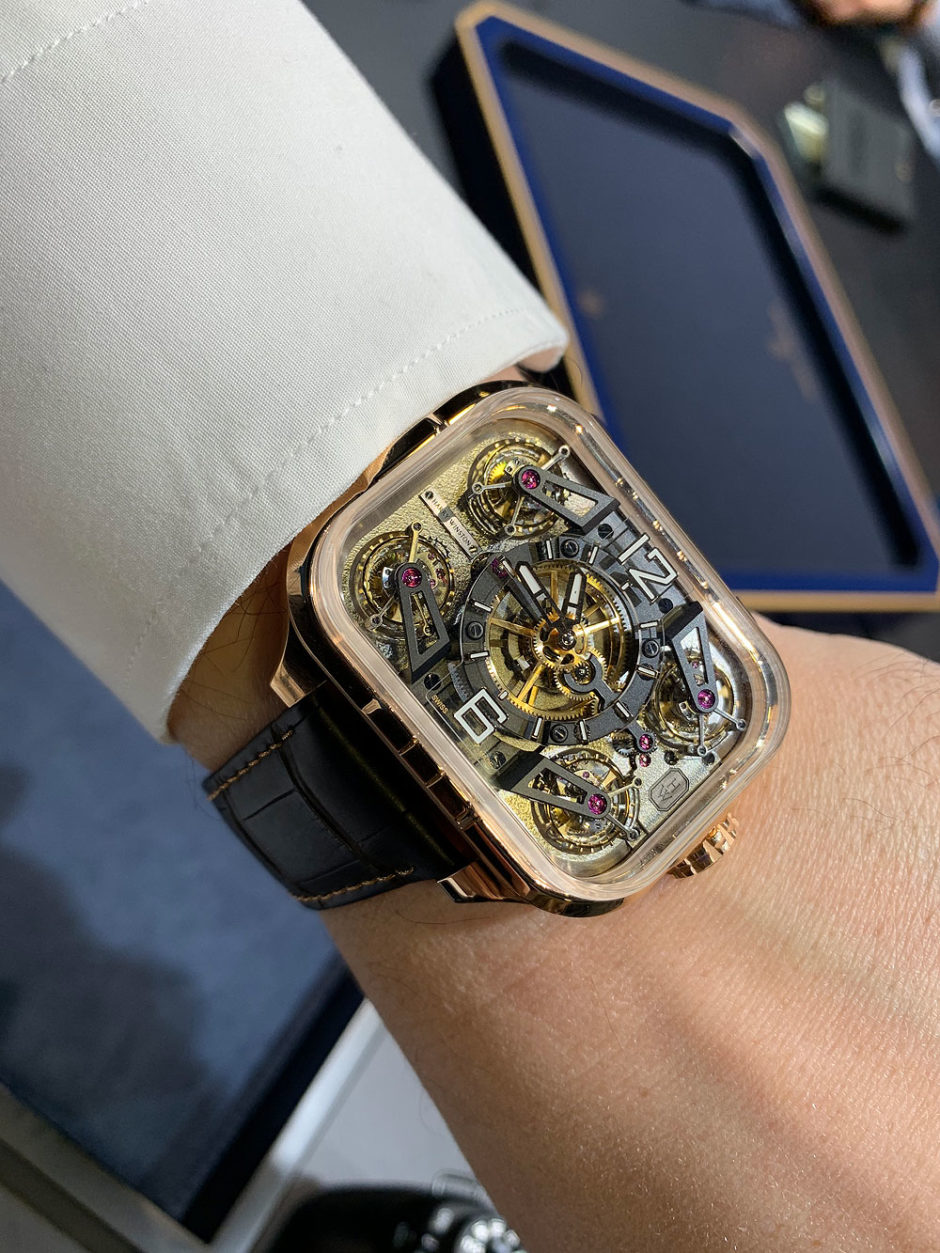 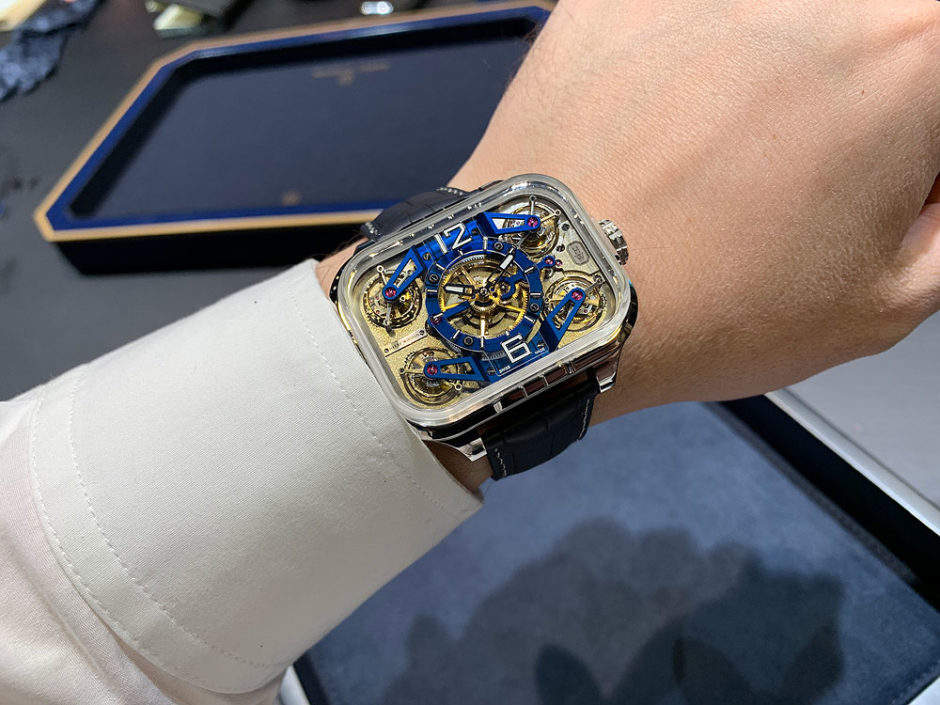 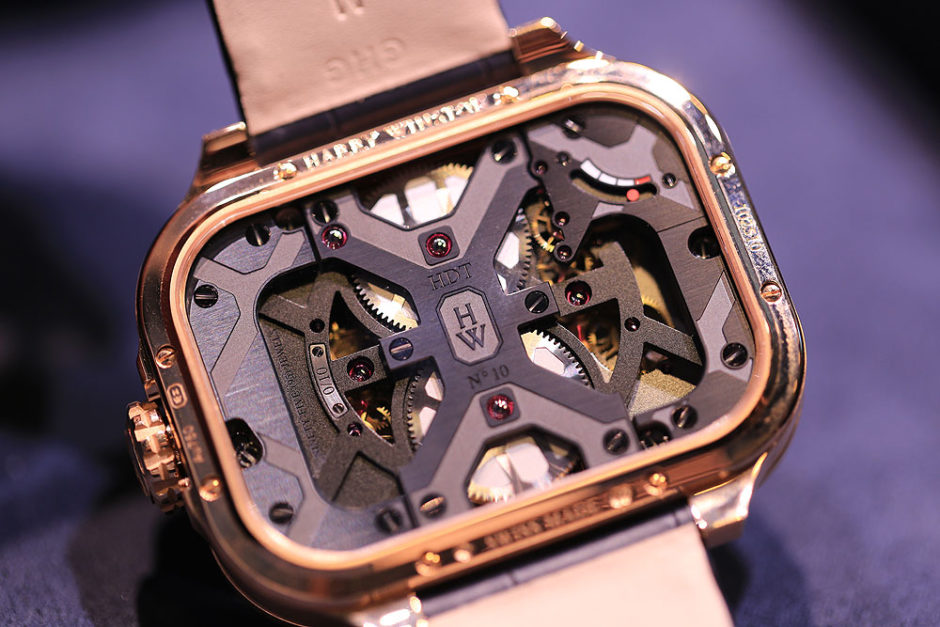 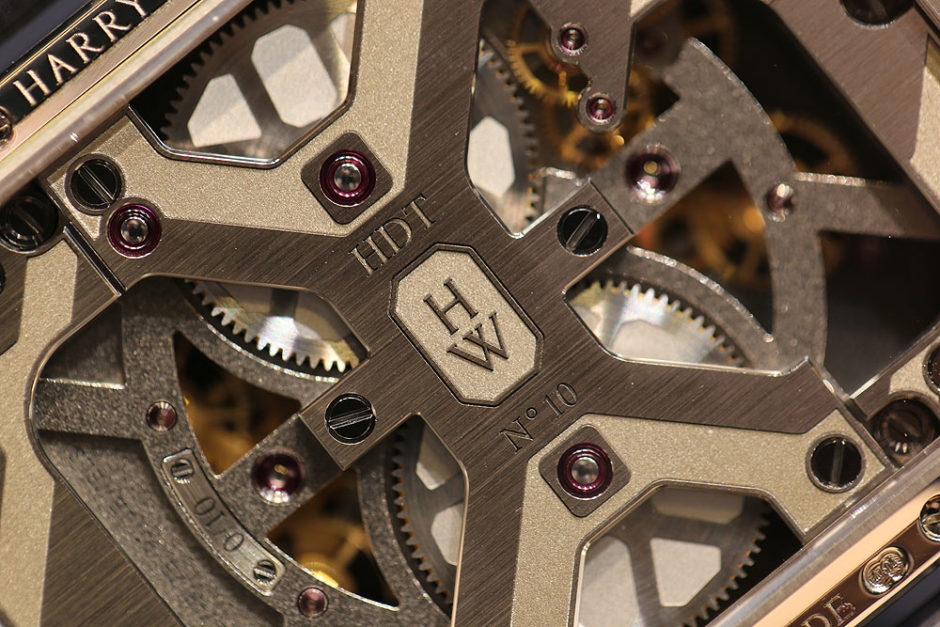