Porsche Design unveiled its first in-house movement, Caliber Werk 01.200, in 2017, installing it as the engine of the limited-edition Chronograph 911 Turbo S Exclusive Series. At Baselworld 2018, the manufacturer launched the first watch in its 1919 Chronotimer collection to be outfitted with the movement, the 1919 Chronotimer Flyback Brown & Leather.

The new timepiece follows the codes of the Porsche Design 1919 Collection, designed at Studio F.A. Porsche in Stuttgart, which emphasize functionality and visual harmony. The slim, bead-blasted and polished titanium case (42 mm in diameter and 14.9 mm thick) frames an expansive dial, with the minute indices positioned on the flange and the notable absence of a tachymeter scale on either the dial’s edge or the bezel. (The latter, of course, would normally be expected on a motor-racing-style chronograph watch such as this one, which the company states is inspired by the “functional aesthetics of the Porsche 911.”) The dial, with a 30-minute chronograph subdial at 12 o’clock, a 12-hour subdial at 6 o’clock, a date window at 4 o’clock, and a “function indicator” for the running seconds at 9 o’clock, is a deep brown color that harmonizes well with the brown leather strap. The flyback chronograph function, which allows the user to measure successive intervals of time, is ideal for such activities as recording cars’ lap times on a racetrack.

The automatic Caliber Werk 01.200, with its integrated flyback chronograph mechanism, is on display through the clear caseback. The movement, which Porsche Design says was three years in development, features 25 jewels, a 48-hour power reserve, and a 28,800 vph (4 Hz) frequency. The openworked barrel bridges feature cutouts to glimpse the chronograph’s flyback function and the gear trains. As per Porsche Design timepiece tradition, the major movement parts are in matte black; the bridges, plates, and polished screws are chrome-plated. Its energy-optimized rotor is made of tungsten and coated with black PVD.

The 100-meter water-resistant case has a screw-down crown, with a dashboard-inspired knurled texture, a pair of pedal-shaped chronograph pushers, and a convex sapphire crystal with a scratch-proof hard coating and antiglare properties over the dial. The openworked lugs are entirely integrated into the calfskin leather strap, which fastens the watch to the wrist with a pusher-operated folding clasp. The Porsche Design 1919 Chronotimer Flyback Brown & Leather will be priced at $7,450 and available as of September 2018 at Porsche Design Stores and authorized retailers.

END_OF_DOCUMENT_TOKEN_TO_BE_REPLACED 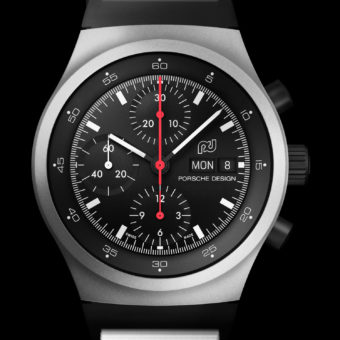