Jaquet Droz introduced its first timepiece with an openworked movement, the Grande Seconde Skelet-One, in 2018, offering it in rose gold, white gold, and black ceramic. This year, the fledgling collection steps into slightly higher-tech territory with a new model with a plasma ceramic case.

Used here for the first time by Jaquet Droz for a watch case, the plasma ceramic that forms the 41-mm case is made by treating white ceramic with gas heated to 20,000°C, which imparts to its surface a striking anthracite-gray metallic sheen, without adding any metal fragments to the process. The resulting material remains as hard, lightweight and scratch-resistant as other high-tech ceramics used in watchmaking. The gray tones are echoed in the gray finishing on the bridges of the stripped down caliber, on display behind the clear sapphire dial, as well as in the sleek gray textile strap, which fastens with a folding clasp that combines stainless steel with the same plasma ceramic used for the case.

The dial’s classic figure-eight configuration, a longtime emblem of Jaquet Droz watches, displays the hours and minutes on a subdial at 12 o’clock, made of gray-treated white gold with white gold hands and indices; and the large “Grande” seconds on a larger subdial at 6 o’clock. Underpinning this time display, and also visible from the rear side, is Jaquet Droz’s skeletonized Caliber 2663 SQ, which beats at 28,800 vph and stores a substantial power reserve of 68 hours in its twin mainspring barrels. The self-winding movement uses an openworked oscillating weight made of 18k white gold, and the gear train is fully suspended and attached to the skeletonized, gray-treated bridges.

The Jaquet Droz Grande Seconde Skelet-One in plasma ceramic retails for $23,600. For my in-depth review of the original Skelet-One in a black ceramic case, click here.

END_OF_DOCUMENT_TOKEN_TO_BE_REPLACED 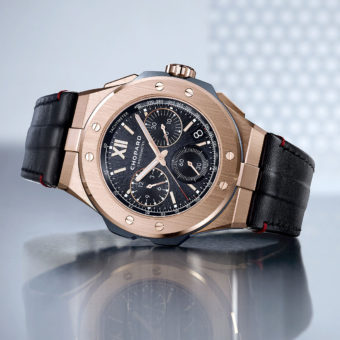