Of the new timepieces it unveiled at Geneva Watch Days earlier this month, Bulgari’s record-breaking Octo Finissimo Tourbillon Chronograph Skeleton Automatic received the lion’s share of accolades and coverage. Not to be lost in the shuffle, however, is the new Bulgari Aluminium Watch, a modern re-interpretation of a groundbreaking model the Roman jeweler-watchmaker introduced in 1998.

More than 20 years ago, in the closing years of the 1990s, Bulgari introduced the first generation of its Aluminium watch, whose design was influenced by the livery of Alitalia jumbo jets and which combined an aluminum case with a rubber strap — the latter a bold and unconventional move at the time, especially for Bulgari. Now described by Bulgari as a “unisex,” and “the watch of the Jet Set” of its era, the Aluminium (the spelling preferred in Great Britain and throughout Europe) was outfitted with a quartz movement, as were many of its peers at the time.

To most watch connoisseurs, the new Bulgari Aluminium is an improvement on the original in several respects: its case is larger as per more contemporary tastes (40 mm), constructed of a more resistant aluminum alloy and featuring re-shaped lugs for greater wrist comfort. The movements inside are not quartz but Swiss-made, mechanical automatic calibers: the two three-hand-date models use Caliber B77 (based on the ETA 2892), while the chronograph-equipped version uses the Bulgari Caliber B130, based on the ETA 2894. A robust black rubber is used for the straps as well as for the hallmark “Bulgari Bulgari” bezel that surrounds the dial.

Three references are available in the new Aluminium series: the Aluminium White Dial and Aluminium Black Dial, with simple three-hand time display and date; and an Aluminium Chronograph, with a black-and-white “panda” tricompax dial with date display at 4:30. All three models use DLC-coated titanium for their casebacks and crown and aluminum for their ardillon buckles; the Chronograph also has black DLC coating on its titanium pushers. The three-hand models retail for $2,950, the Chronograph for $4,250.

END_OF_DOCUMENT_TOKEN_TO_BE_REPLACED 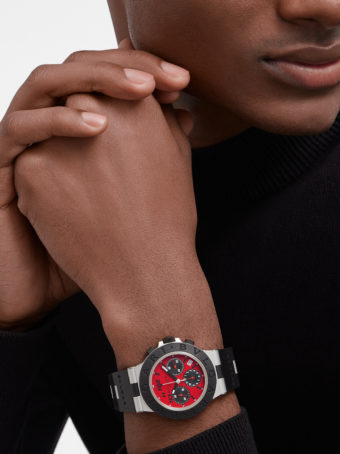 On The Road: Bulgari Revs Up With Aluminum ...