On the occasion of “The Art of Watches Grand Exhibition New York 2017,” Patek Philippe has just revealed nine new limited-edition watches, for men and ladies, including a totally new grand complication and a collection of rare handcrafted watches.

These are the wristwatches: 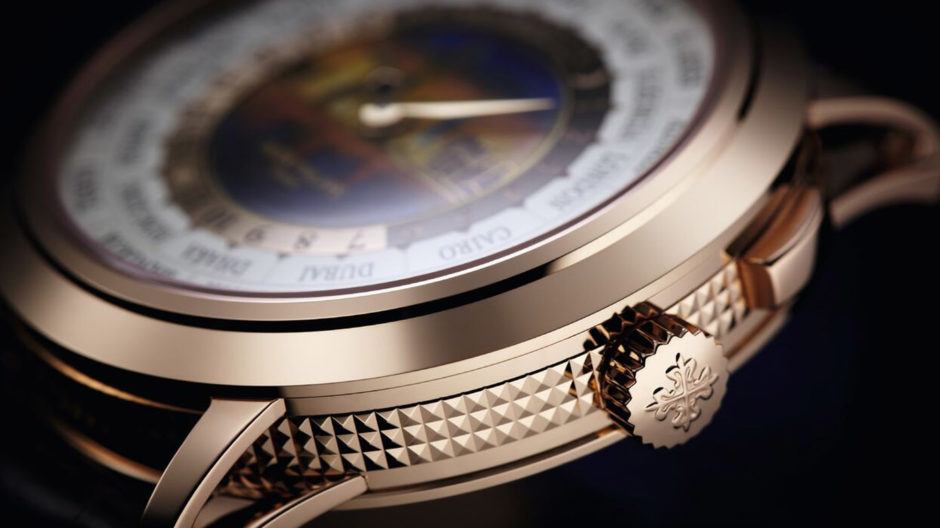 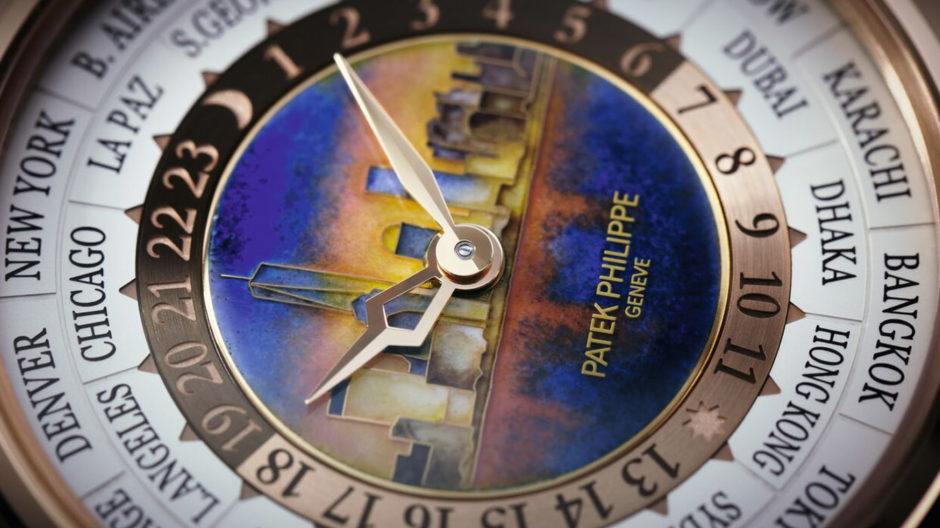 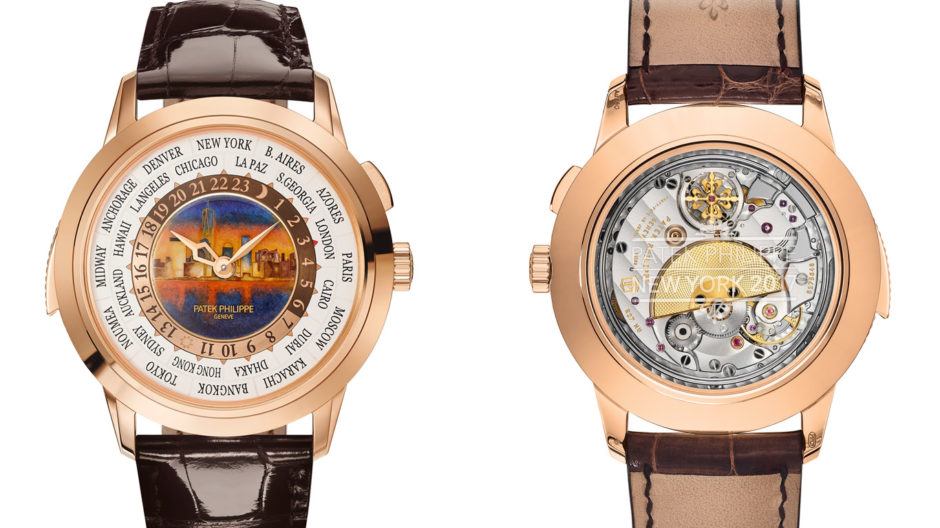 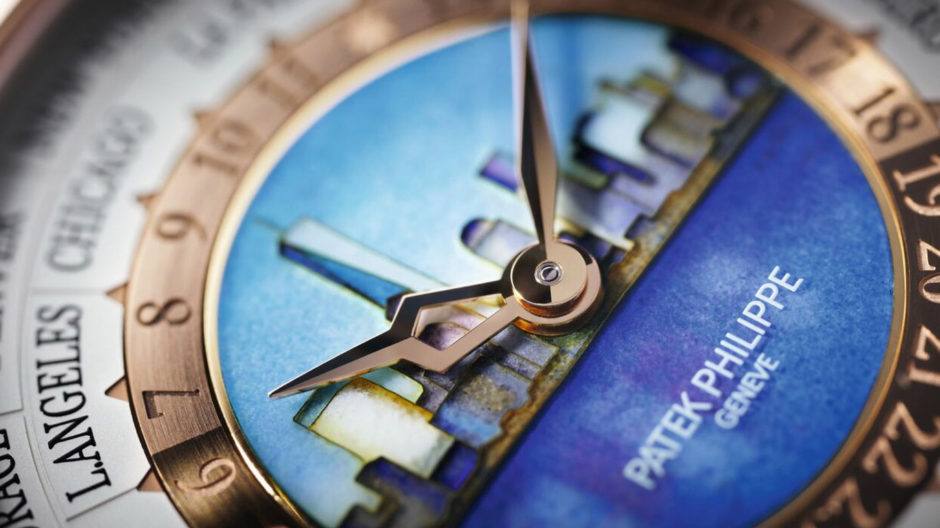 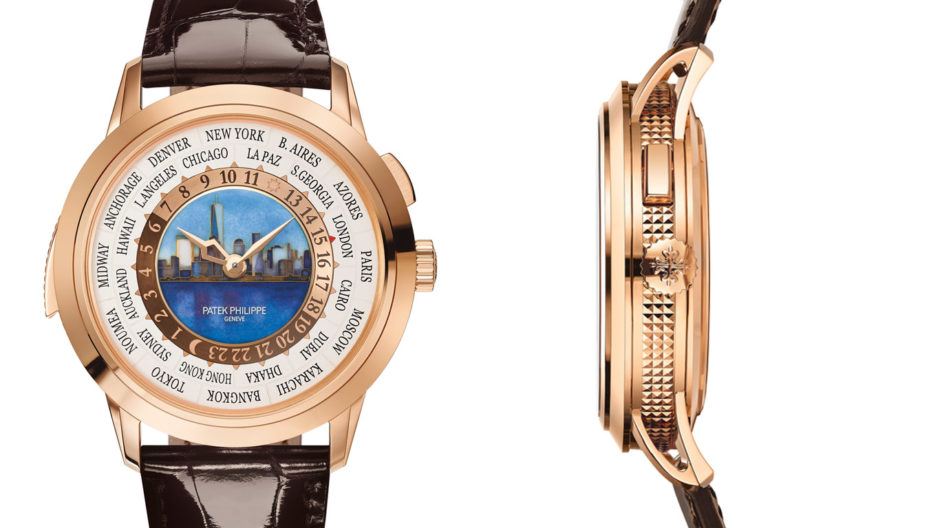 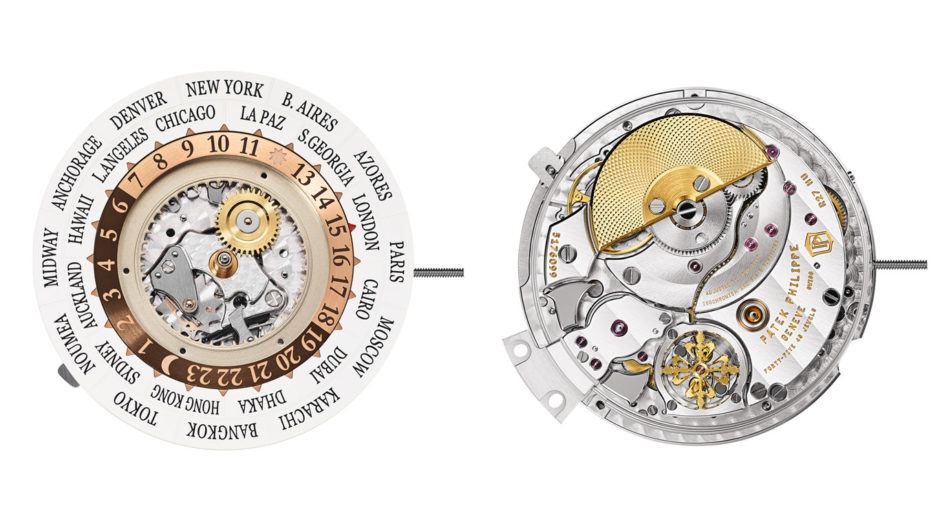 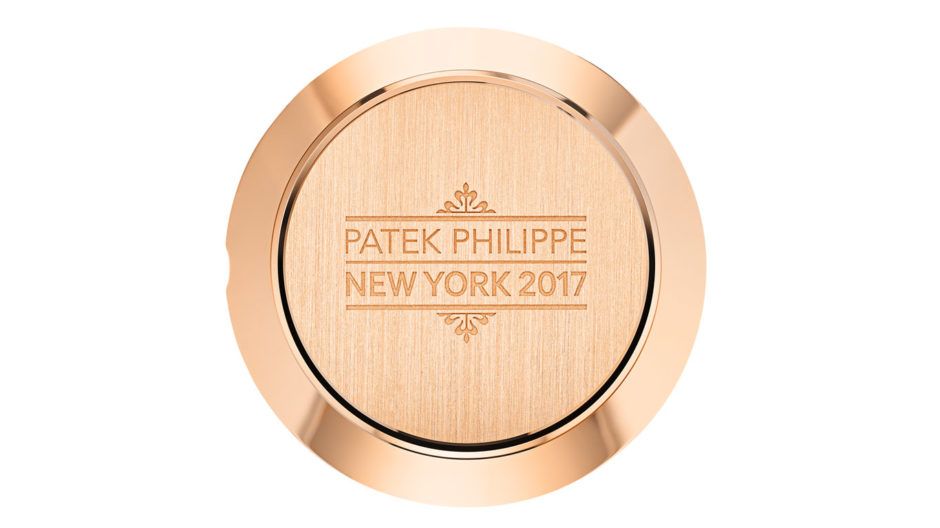 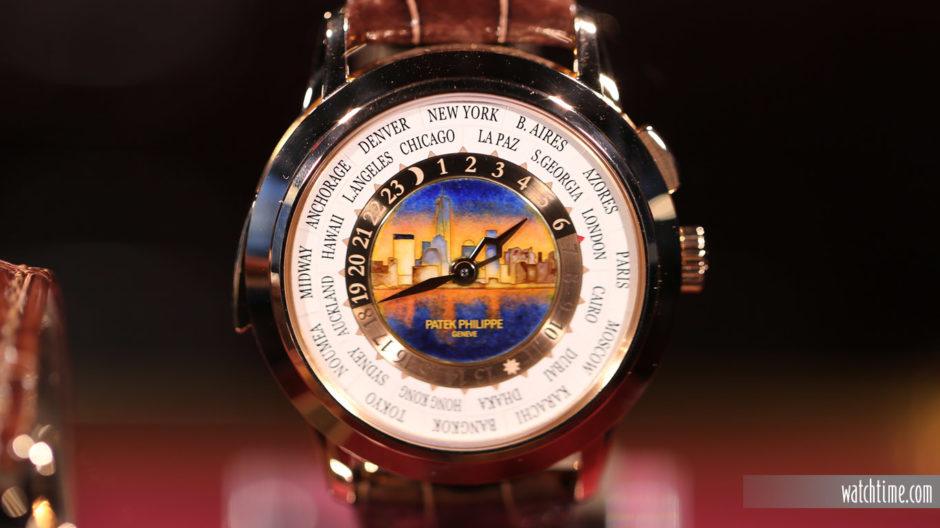 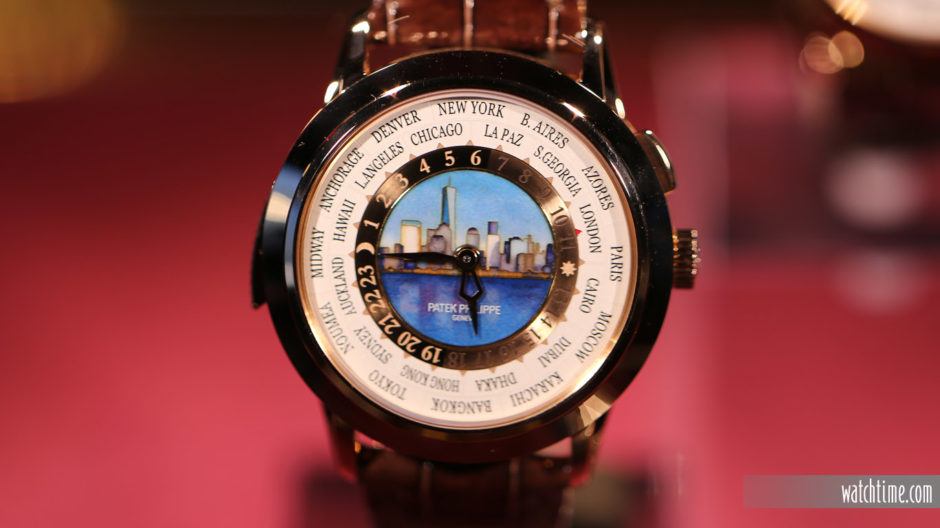 The new Ref. 5531 is the first watch from Patek Philippe that combines the two complications that are most associated with the Geneva-based manufacture: a minute repeater and a world-time function. In bringing these complications together, Patek Philippe also managed to implement a horological innovation: Unlike other world time minute repeaters that acoustically indicate home time even when their owners are located at the other end of the world, the Ref. 5531 always strikes local time, which means the hour displayed by the hands from the center in that time zone represents the city aligned with the 12 o’clock position on the dial. To accomplish this, Patek Philippe developed the new self-winding caliber R 27 HU movement. The 462-part movement is housed in a rose-gold case with pierced lugs. Its caseband is hand-guillochéd with Patek Philippe’s typical hobnail pattern. The dial is adorned with a cloisonné enamel motif, typical for Patek Philippe’s world time watches. The dial depicts the Manhattan skyline by day or by night: The new Ref. 5531 World Time Minute Repeater New York 2017 Special Edition consists of two editions of five pieces each – five with the “New York by Day” dial and five with the “New York by Night” dial. All watches have a sapphire crystal caseback with the engraved inscription “PATEK PHILIPPE NEW YORK 2017” as well as an interchangeable back in solid rose gold with the same engraving. Price: $561,341 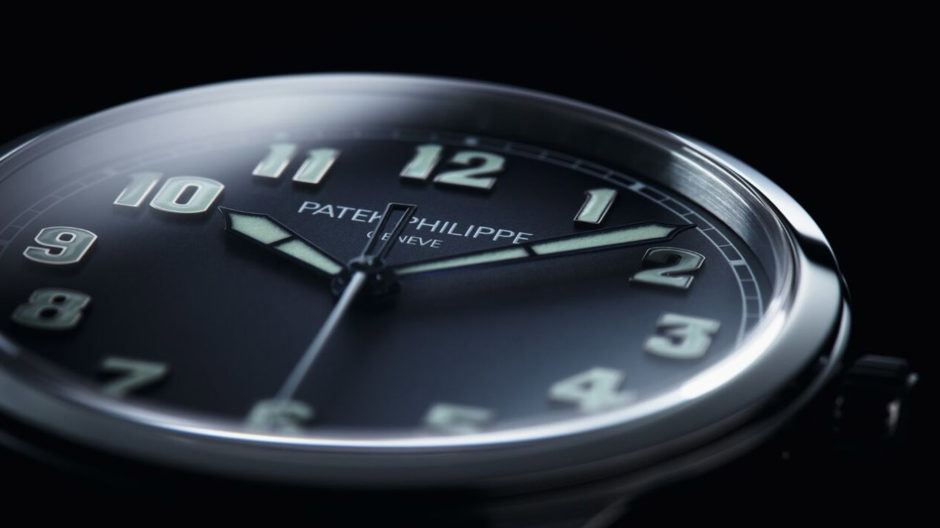 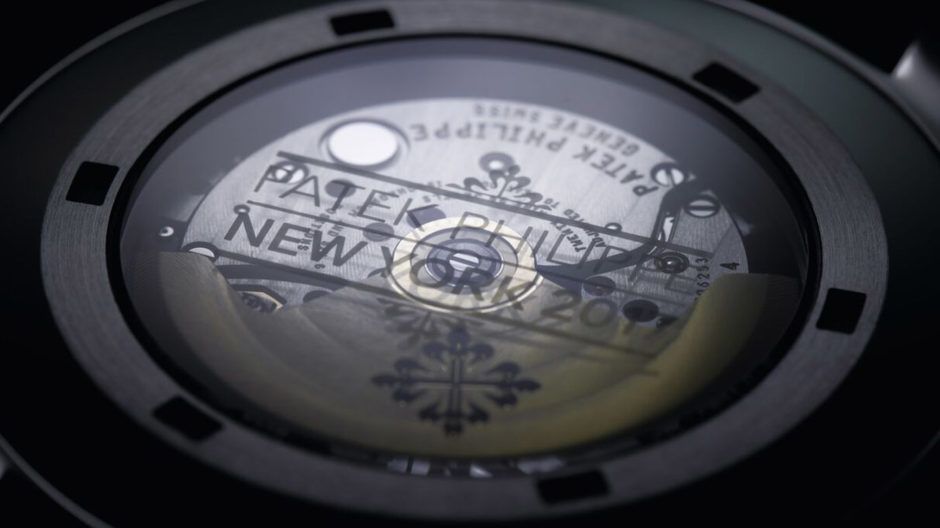 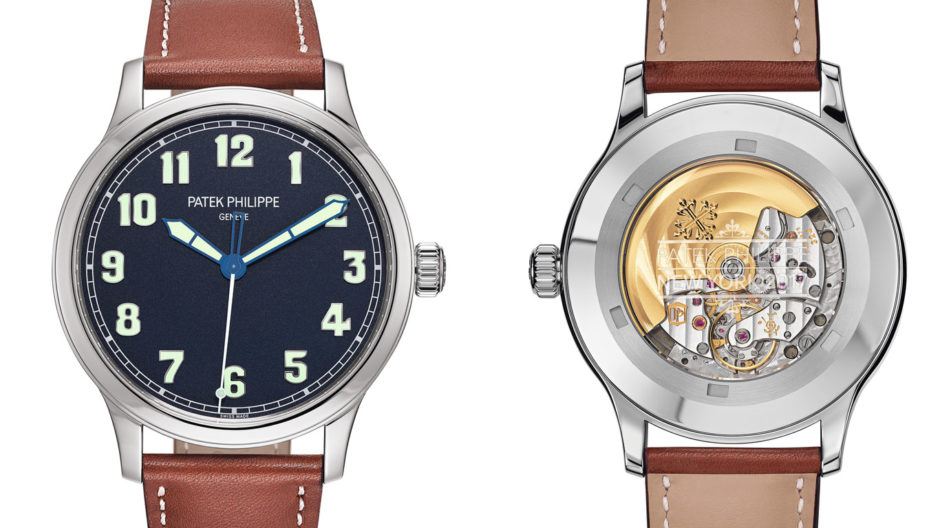 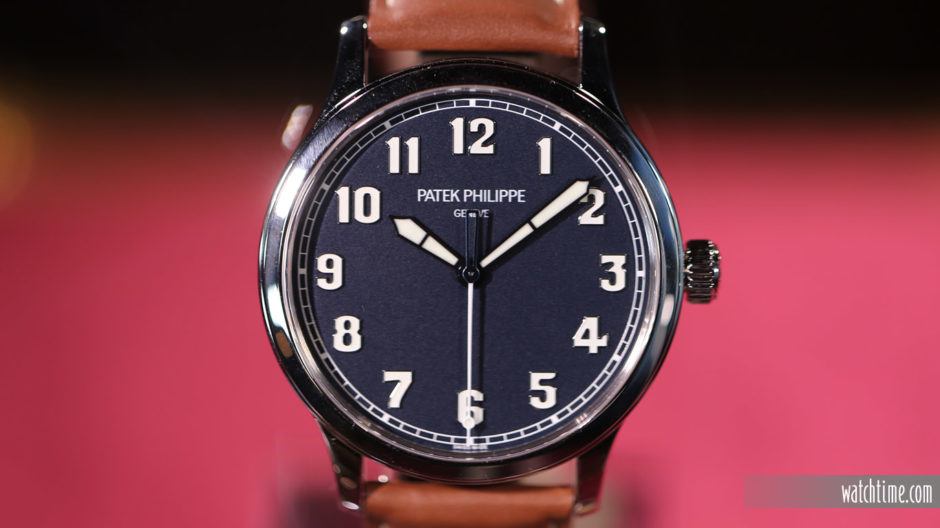 Cased in steel – rare for a watch outside the casually elegant collection – the grand taille Ref. 5522 Calatrava Pilot New York 2017 Special Edition comes in a limited edition of 600 watches and features an exclusive dial reminiscent of vintage Patek Philippe aviators’ watches. The large applied Arabic numerals in white gold and the broad baton hands in blued steel have a luminescent coating. The automatic caliber 324 S can be seen through the sapphire-crystal back decorated with the engraving “PATEK PHILIPPE NEW YORK 2017.” Price: $21,547

Patek Philippe’s world time function also takes center stage in the Ref. 5230 New York 2017 Special Edition men’s wristwatch: The 300 watches of this limited series are powered by the self-winding caliber 240 HU movement. The watch comes with a white-gold case with a chamfered bezel and a dial with an opaline blue center: its embossed motif depicts the same Manhattan skyline that adorns the center of the Ref. 5531. The city disk and the 24-hour disk (with day/night segments) permanently display the time in all 24 time zones. The time zone can be adjusted by actuating the pusher at 10 o’clock. This simultaneously corrects the city disk, the 24-hour disk, and the hour hand from the center. The hour hand is delicately skeletonized and shows the silhouette of the “Southern Cross” constellation, a hallmark reserved exclusively for Patek’s World Time watches. The sapphire-crystal caseback is engraved with the inscription “PATEK PHILIPPE NEW YORK 2017. Price: $47,000 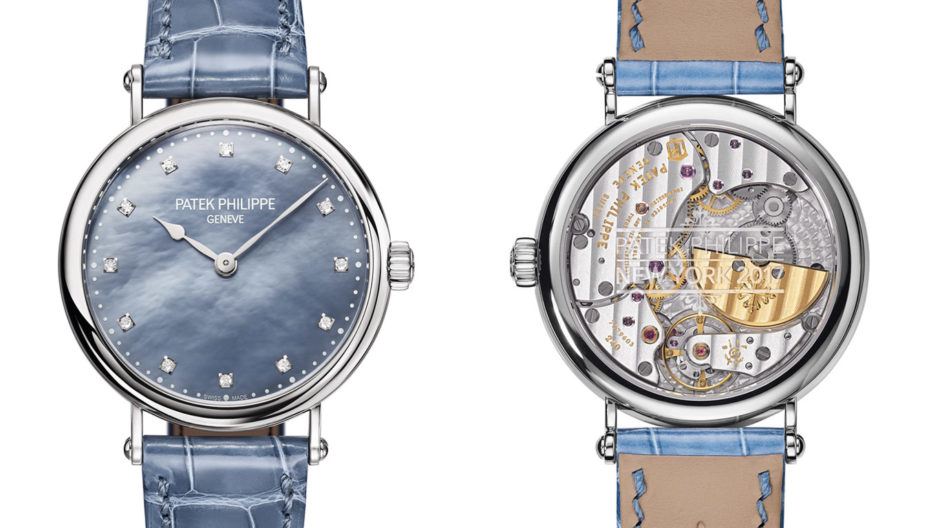 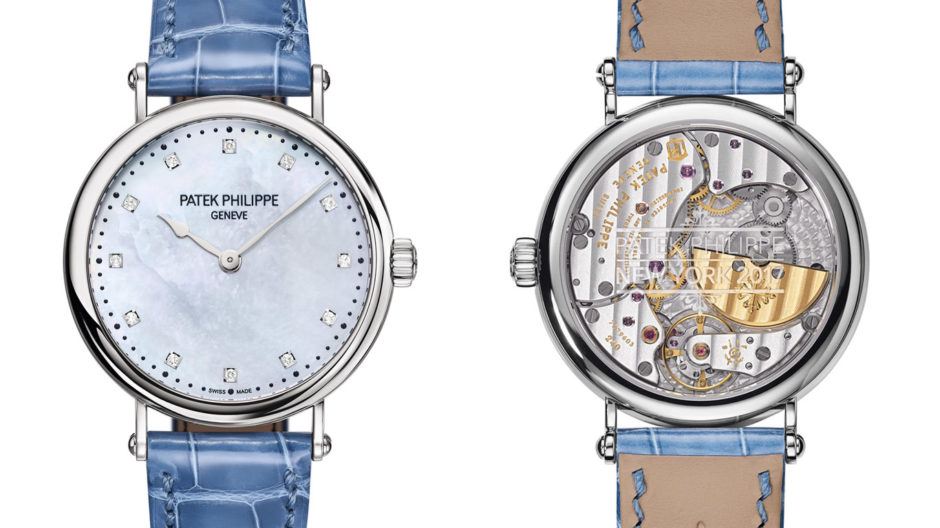 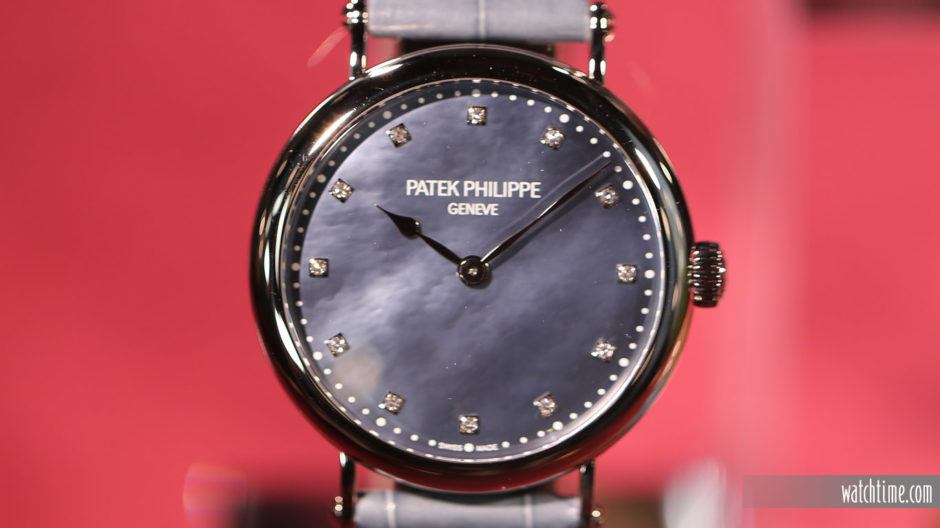 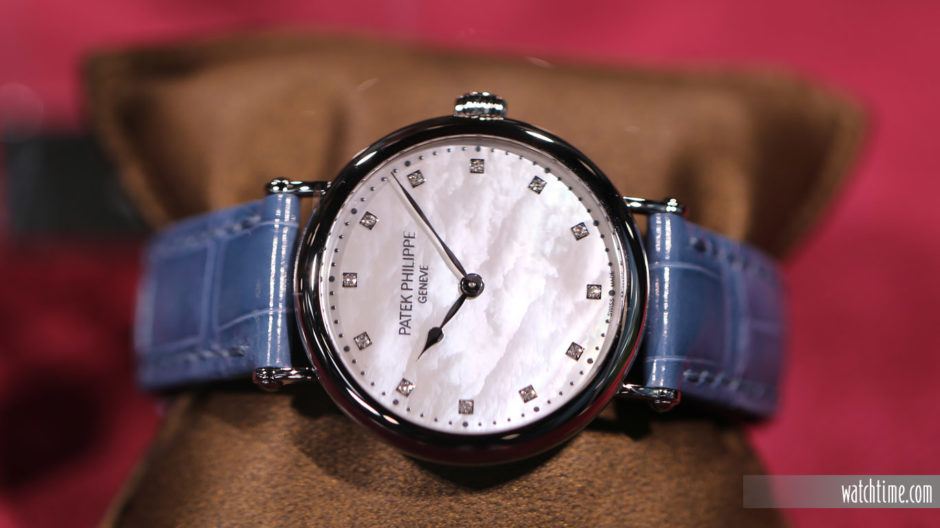 The Ref. 7200/50 Calatrava New York 2017 Special Edition features an ultra-thin white-gold officer’s-style case with straight lugs and a mother-of-pearl dial with diamond hour markers. It is available in two limited-edition versions of 75 watches each – one with a white mother-of-pearl dial and a peacock blue alligator leather strap (Ref. 7200/50-010), the other with a blue mother-of-pearl dial and a blue-gray alligator leather strap (Ref. 7200/50-011). The ultra-thin self-winding Caliber 240, which celebrates its 40th anniversary in 2017, can be seen through the sapphire-crystal caseback with the engraved “PATEK PHILIPPE NEW YORK 2017” inscription. Price: $29,485

The Ref. 7000/250 New York 2017 Special Edition comes with a blue enamel dial with diamond hour markers. Its white-gold case features a “Flamme®” setting composed of 160 flawless Top Wesselton diamonds (~0.64 ct). This setting technique, proprietary to Patek Philippe, amplifies the radiance of the precious stones. The ultra-thin self-winding Caliber R 27 PS sounds the hours, quarter hours, and minutes on two gongs when the slide in the case flank is actuated. The navy blue alligator leather strap is secured by a white-gold prong buckle set with 26 diamonds (~0.18 ct). This irresistibly feminine grand complication comes with a sapphire crystal caseback and an interchangeable white-gold back, both with the engraved “PATEK PHILIPPE NEW YORK 2017” inscription. Price: $447,939 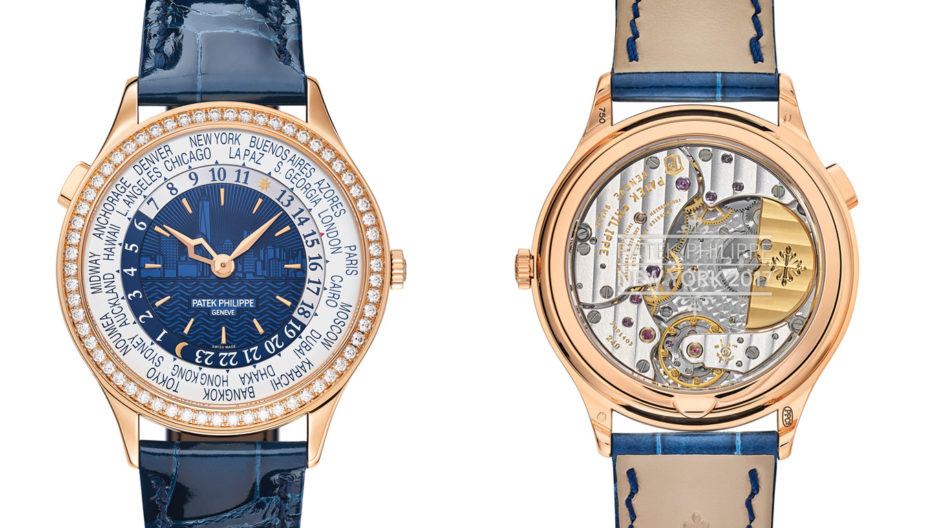 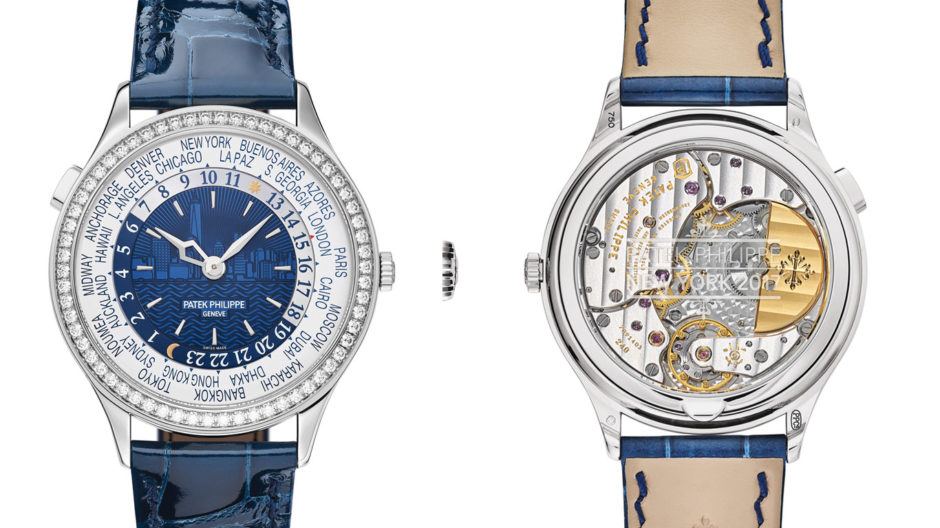 The Ref. 7130 World Time New York 2017 Special Edition is available in two 75-timepiece editions, one in white gold, the other in rose gold. The relief-embossed skyline of New York adorns the opaline blue dial center just as on the Ref. 5230 men’s model. It comes with 62 flawless rare white Top Wesselton diamonds (~0.82 ct) complemented by 27 diamonds (~0.21 ct) on the prong buckle that secures the dark blue alligator leather strap. The self-winding caliber 240 HU movement can be seen through a sapphire-crystal caseback with the engraved inscription “PATEK PHILIPPE NEW YORK 2017”. Price: $56,702

No Responses to “9 New Limited-Edition Watches from Patek Philippe”