Within the past year, Omega has demonstrated a renewed commitment to preserving its rich watchmaking history, resurrecting the original 1948 Seamaster as a modern homage piece at Baselworld 2018 and, even more notably, producing a period-appropriate replica of its first wrist-worn chronograph watch as an extremely limited edition last summer. The march through the archives continues this year, with Omega announcing that it is bringing one of its most legendary vintage movements, Caliber 321, back into production after a hiatus of more than 50 years.

A mainstay of many Omega watches since its debut in the 1940s, including some of the early Seamaster chronographs, Caliber 321 became famous as the movement used in the first Omega Speedmaster, which hit the market in 1957, as well as in several historically significant Speedmaster models in subsequent years. These included the Speedmaster ST 105.003, the reference first tested and qualified by NASA for mission use and worn by astronaut Ed White on the first American spacewalk; and the Speedmaster ST 105.012, the first wristwatch worn on the moon. Caliber 321 was notable, and remains prized by vintage-watch collectors to this day, for its use of a monobloc column wheel, machined from a single piece, as well as for its attractive architecture.

The two-year process undertaken by Omega’s dedicated team of experts to re-create Caliber 321 was conducted in secrecy and even given a codename: “Alaska 11,” a callback to the names the company used to shroud the previous top-secret Speedmaster projects it conducted on behalf of NASA in the 1960s and ’70s. As part of its extensive historical research to re-construct the manual-winding chronograph movement as accurately as possible, Omega used a digital scanning technology called “tomography” to peer at the movement inside the Speedmaster ST 105.003 worn by Apollo 17 astronaut Gene Cernan in 1972, a piece now housed at the Omega Museum in Bienne, Switzerland, and use its design as a blueprint.

Omega will begin serial production of the modern Caliber 321 at its manufacture in Bienne, all within a dedicated workshop with each individual caliber assembled by a single watchmaker. Omega has promised more news on this and other developments in the coming months.

END_OF_DOCUMENT_TOKEN_TO_BE_REPLACED 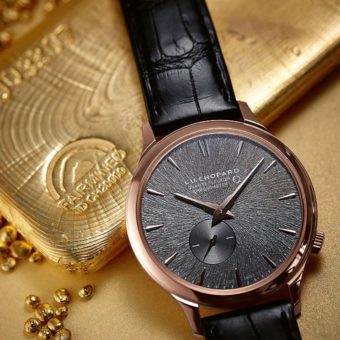