Patek Philippe employs artisans who have mastered every specialty in the art of watchmaking, including dial making, at the brand’s subsidiary, Cadrans Flückiger in Saint-Imier. Here’s a closer look. 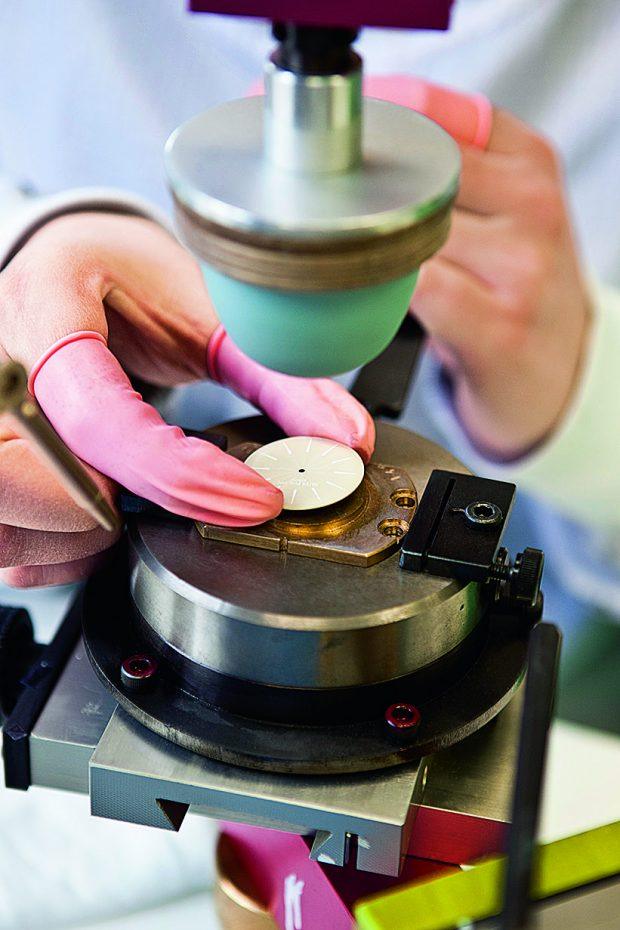 1/4
Lettering is pad printed onto the dial. 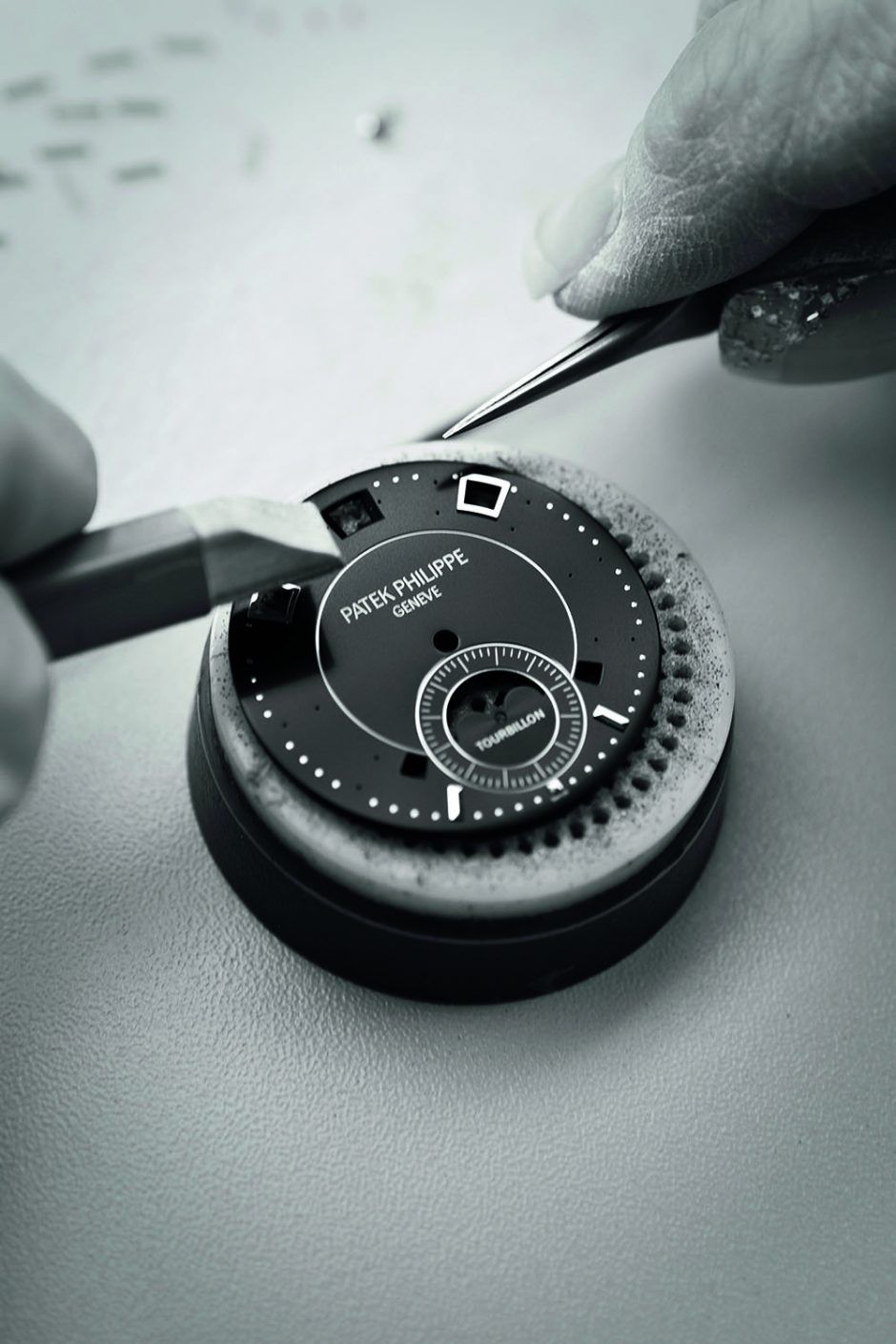 2/4
Many steps in the process of fabricating dials are performed by hand. 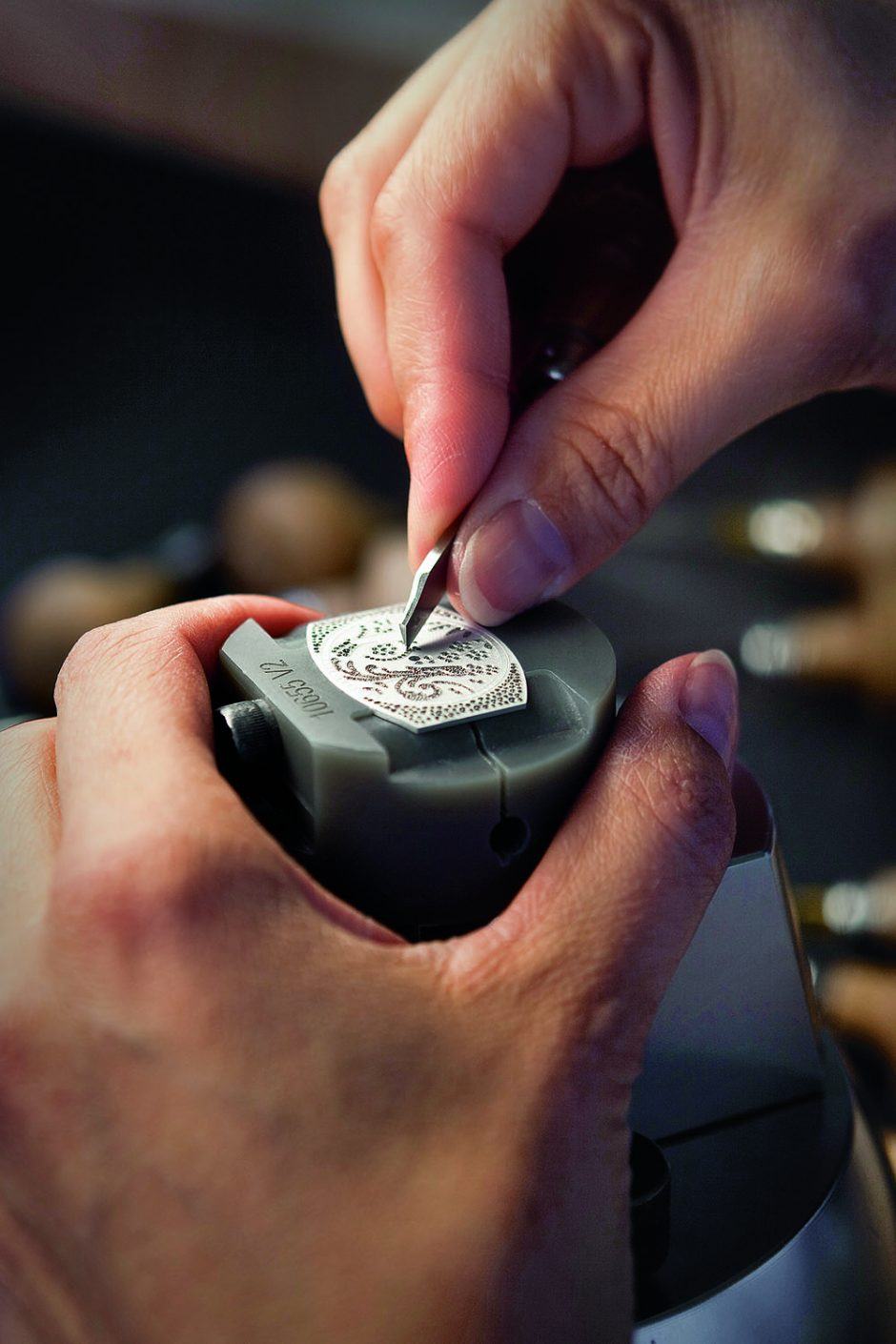 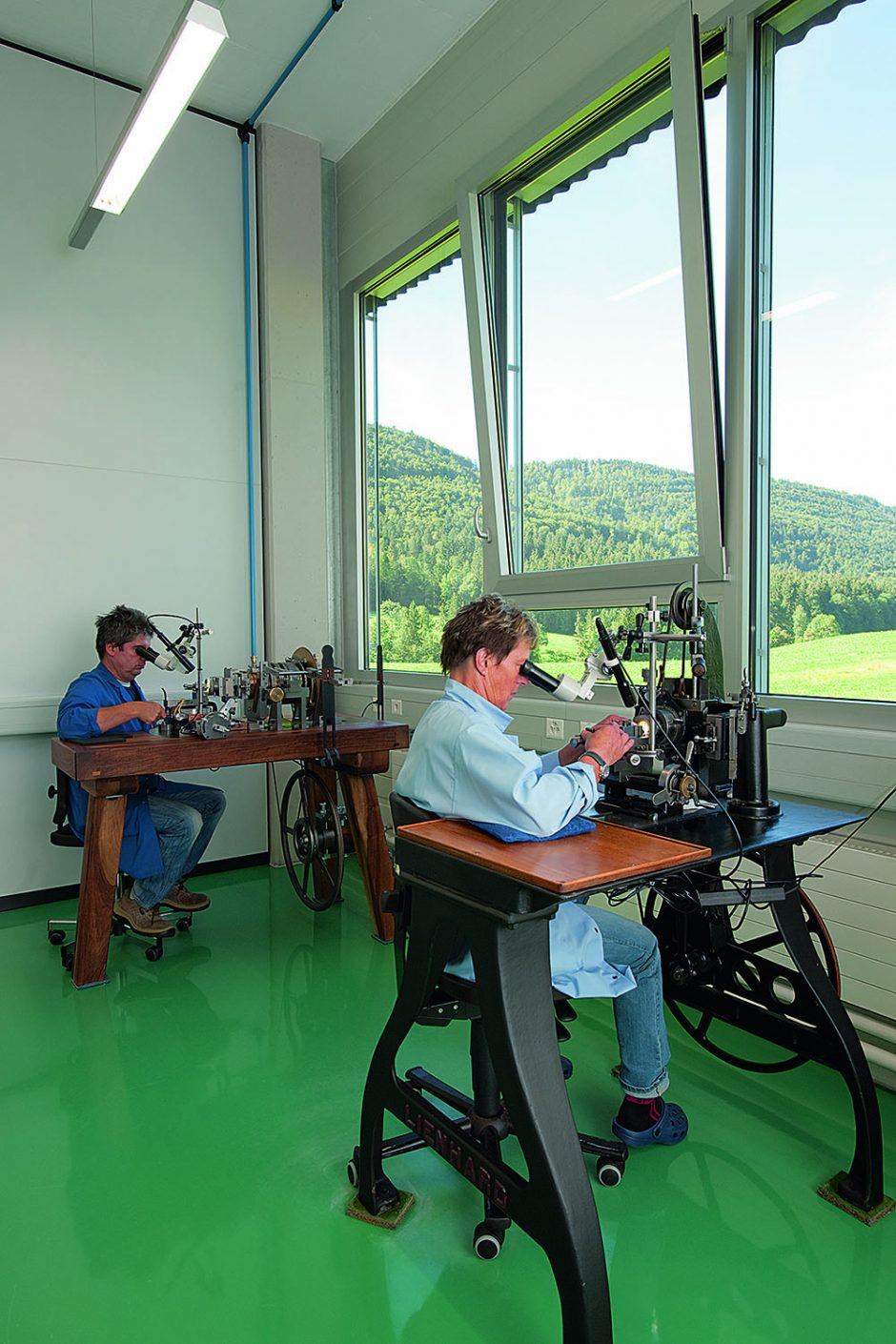 4/4
Guilloché patterns are crafted with the aid of antique machines.

Making dials for luxury watches is a delicate and complex art. Even the smallest error will be plainly visible on a finished watch. That’s why Patek Philippe has its dials produced by Cadrans Flückiger SA.

The Cadrans Flückiger dial factory, which was established in 1860, was taken over by Patek Philippe in 2004. With this acquisition, the Geneva-based manufacture took the final step toward independence from external suppliers. Cadrans Flückiger relocated to its present quarters in the commercial district of Saint-Imier, in Switzerland’s Jura region, in 2006. The modern, newly built factory provides 2,000 additional square meters of area for new departments and staff, currently about 100 workers. Moreover, the new premises enable Cadrans Flückiger to uphold the strictest environmental standards. The venue offers optimum conditions for the annual production of 100,000 dials, which are produced in batches ranging from 100 to 500 pieces, as well as in small series of one to five. Forty percent of the dials are destined for Patek Philippe. As was the policy prior to the takeover, the remaining 60 percent are delivered to other luxury watch manufacturers.

Between 50 and 110 steps are needed to fabricate a dial for a Patek Philippe watch. The face for a luxury watch begins with the creation of a prototype. Six colleagues collaborate in the prototype division, where they conduct feasibility studies, draft technical drawings, determine the exact specifications for the design and produce patterns. The team in this department is also responsible for fabricating small series and for after-sales service. Serial production begins with the stamping of the blanks. Co-workers first mechanically stamp the eyes for the hands’ staffs and the apertures for windows, if any, from square brass plates. If necessary, presses bevel the edges of the windows. Only in the final step does the dial receive its (usually circular) contour. The subsequent steps are mechanical drilling, milling, deburring, circular graining, and diamond polishing.

Next comes the surface processing. Dials may be matte finished, brushed to a satin finish, sandblasted, or adorned with a sunburst pattern. Pressurized jets, abrasive disks, or handheld brushes can be used, depending on the desired finish. Afterwards, the parts that will ultimately become the watches’ dials are immersed in an electroplating bath, where they acquire a coating of nickel, rhodium, ruthenium, silver or gold. The layer that precipitates onto the metal substrate in the course of this electrolytic process is between 0.00001 mm and 0.015 mm in thickness. The latter value is 1,500 times thicker than the former, but is nonetheless four times thinner than an average strand of human hair. Multiple immersions in a chemical bath give the dials their final color. The spectrum of hues is theoretically unlimited, but Patek Philippe usually opts for understated tones such as silver, gold, brown, gray, blue, or black.

In addition to these techniques, the artisans at Cadrans Flückiger have also mastered diverse specialties that make the dials of the haute horlogerie timepieces into miniature works of art. Guilloché embellishment, for example, is applied with the aid of antique machines that rely entirely on mechanical means to transform complex decorative designs on large-format templates into tiny engraved patterns on the watches’ dials. Enameling demands absolute mastery of the materials and several kiln firings, each of which could potentially destroy the component. And gemstone setters must work with the utmost care to ensure, for example, that each diamond is firmly mounted and can best reveal its sparkle.

An artisan who practices any of these techniques must scrupulously avoid even the slightest inaccuracy. Anything less would betray the trust that Patek Philippe’s clients place in the high art of watchmaking.

Patek Philippe also fabricates appliqués at the same site. This assures that the indexes for the hours and minutes, as well as the frames that surround windows in dials, perfectly harmonize with the base layer. The production of appliqués also involves cutting the proper shapes for indexes, stamping and pressing the anchoring feet, and faceting the indexes.

Patek Philippe, as well as other luxury brands, insists that the faceting must be manually executed. In the assembly phase, skilled artisans insert the appliqués into the appropriate borings and anchor the appliqués by riveting or soldering on the underside of the dial.

A meticulous final quality control is the last step in a long series of examinations that guarantee that each watch’s dial is immaculately fabricated.

No Responses to “The Perfect Face: Dial Making at Patek Philippe”