Omega has been equipping cinematic superspy James Bond with its Seamaster timepieces since the release of GoldenEye in 1995. Earlier this year, Omega revealed, and released, the timepiece that Agent 007 will wear in the upcoming film No Time to Die, a Seamaster Diver 300M model in a titanium case. This week, Omega announced another addition to its James Bond collection, this one a version of the Seamaster Diver that combines a precious-metal case with a black enamel dial accented with Bond-specific details.

The Omega Seamaster Diver 300M James Bond Numbered Edition‘s case measures 42 mm in diameter and is produced in a striking platinum-gold alloy; each case has a matching platinum-gold plate on its side, engraved with the model’s limited-edition number. The black leather strap’s buckle uses the same material as the case and has a polished and brushed finish.

The new 007 watch features a black enamel dial with a spiraling gun barrel pattern in 18k white gold (a design element paying homage to one of the classic visual elements of the film series). The unidirectional rotating divers’ bezel has a black ceramic ring bearing a 60-minute diving scale with silver-colored Arabic numerals in positive relief, along with the traditional triangle-shaped marker at 12 o’clock.

Other notable details on the dial includes a hidden number “50” within the Super-LumiNova-coated 10 o’clock index marker, a reference to the 50th anniversary of the James Bond film On Her Majesty’s Secret Service; a “007” logo at 7 o’clock on the white-colored enamel outer minute ring; and 18k white gold used for the arrow-shaped hands, indexes, and Bond family coat-of-arms at 12 o’clock.

The coat-of-arms visual is also engraved in platinum on the sapphire caseback. Through it’s clear surface you can spy the Omega Co-Axial Master Chronometer Caliber 8807, certified by METAS for the highest standards of precision, chronometric performance, and magnetic resistance up to 15,000 gauss. The in-house, automatic movement also boasts a free sprung-balance with silicon balance spring; a bidirectional rotor in 18k Sedna gold; and a Geneva waves motif on the rotor and balance bridge. The movement stores a power reserve of 55 hours, with 35 jewels and a frequency of 25,200 vph.

The Seamaster Diver 300M James Bond Numbered Edition comes presented in its own “Globe-Trotter” suitcase with NATO-inspired straps, with an additional black-colored rubber strap included. It retails for $51,900 and can be purchased at Omega boutiques nationwide.

END_OF_DOCUMENT_TOKEN_TO_BE_REPLACED 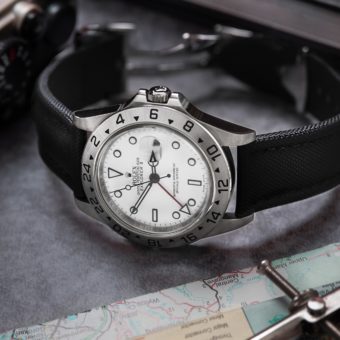